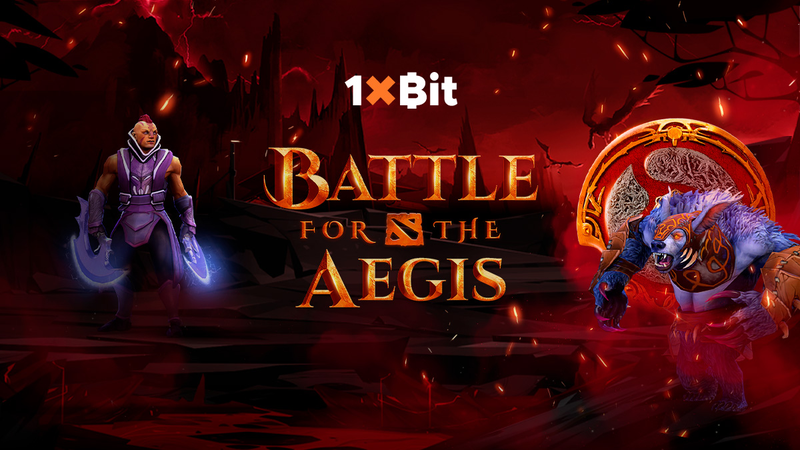 It's a new dawn at 1xBit as another tournament hits our screens! This time around, the platform is coming up with a tournament that is built for eSports enthusiasts. Enjoy the world of Dota 2 by taking part in a new tournament from 1xBit! Battle for the Aegis is here; find the key to victory and open treasures on your way to winning.

The International is one of the most exciting tournaments in the whole esports industry. The first TI was held in 2011 at Gamescom in Cologne, Germany. At the time, Dota 2 had just come out, and the developer, Valve, surprised everyone. They announced that the first The International would take place. The prize pool for that tournament was $1.6 million, which was a record at the time. For first place, Team NAVI received the entire $1 million.

After that, nine more The Internationals were held. Most of them were held in Seattle, first at Benaroya Hall and then at Key Arena. In 2018, the main tournament of the year was held in Vancouver; in 2019, it was Shanghai.

Unfortunately, The International was not held in 2020 as the COVID-19 pandemic began. But the following year, it was possible to resume the Dota 2 festivities. The capital of Romania, Bucharest, hosted The International 10. Team Spirit, the second-ever winner from Eastern Europe, defeated PSG.LGD in the final 3:2. For first place, they won a record $18,208,300 in eSports prize money. The total prize pool of the tournament was $40,018,195.

The upcoming International 11 will be held in Southeast Asia, Singapore, for the first time. The tournament will feature 30 teams from October 8-30. First, there will be the Last Chance Qualifier, then the Group Stage, and the playoffs will be the final part of the tournament. Team Spirit, the current world champions, is one of the favorites to win. PSG.LGD from China will also try to raise Aegis finally.

There are dangerous OGs who won one of the majors this season, the upstarts TSM and Gaimin Gladiators. Also important to note are BOOM, Fnatic, and Talon, for whom this International will be their home. Many players from Southeast Asia will enjoy playing at TI. Fans around the world are eagerly awaiting the start of The International 11.

How to Take Part

To get started with this tournament and tap into the basket of winnings in store, bet on any Dota 2 event with 1.5 odds or higher and collect the keys. Open treasuries to be among the seven lucky winners that have access to the 600+ mBTC prize fund. The prize is determined by your level. The maximum reward a winner can earn in this tournament is 250 mBTC. While the least attainable prize for this tournament is 10 mBTC. There are also three main classes of super prizes for those who make it to the Eternal Treasure level. The super prizes are Aegis (250 mBTC), Eternal Reward (150 mBTC) and Legend Reward (100 mBTC).

The promotion is scheduled to run through from October 5th to October 31th, 2022. As the tournament warms up to get into full gear, now is the time to get ready for what's ahead.

There are multiple reasons why 1xBit should be your one-stop for all things crypto betting and in this section, we will be taking a dive into them.

In recent times, eSports has become the new cool, with quickly increasing potential. With the fast rate at which the sport is going, the attention of bettors has been piqued. This has caused more sportsbooks out there to include an impressive collection of eSports markets in the offerings. 1xBit, understanding how much traction the sport is garnering in recent times, took no chance in ensuring their platform is well stacked with lots of eSports events to pick from.

One of the biggest strengths of 1xBit is the robustness of their sportsbook. Every sports bettor fancies the idea of having a lot of sports betting markets to choose from and with 1xBit, that's a reality.

1xBit is one platform that has proven to hold it down as an ideal crypto betting platform. The platform prides itself on one that only allows crypto payment methods alone. It is with this resolve that the platform has made it possible to provide over 40 crypto payment options. Interestingly, 1xBit also makes sure that they keep updating their options to include more coins.

It has become mainstream in recent times that bettors crave some level of anonymity as they place bets online. If you fall under such a category, then you are best served to create an account with 1xBit, as anonymity is assured. 1xBit employs a registration process where the only information required when creating an account are email and password. This way, you get to keep your identity as anonymous as you would like while you explore the betting opportunities available on the platform.

Generous Welcome Bonus up to 7 BTC

Another enticing thing about signing up on 1xBit is the attractive welcome bonus that's on offer. Every new bettor desires to have an impressive welcome bonus to soften the blow as they find their way on the platform. With 1xBit offering new users up to 7 BTC, your winning chances are favored by a mile.

For a great deal of betting platforms out there, it is commonplace that users are subjected to a series of steps to create an account. These steps are necessary because they serve as a mandatory KYC process to cross before opening an account. This is not the case when signing up on 1xBit. On the platform, registration only takes about a minute to get done as only your email and password are required. This makes the entire registration process smooth and hassle-free.

Sign up at 1xBit today and take part in the new Dota 2 tournament. A truckload of amazing prizes awaits you!