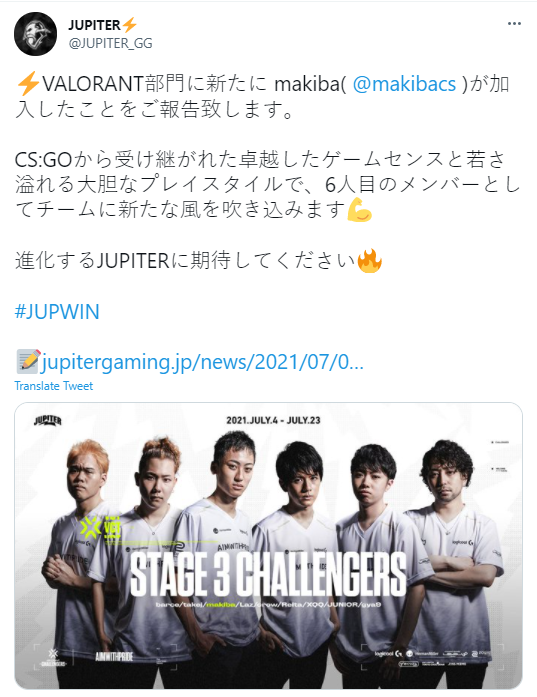 In their announcement post, Absolute JUPITER presented the new lineup as a six-man roster, with no player yet publicly benched as of posting.

makiba was previously signed with the CNCI BLUE BEES, debuting with organization on the eve of the new year in the first stage's Challengers 1 as a Sentinel. The team notably took solid finishes in two of the stage's Challengers, qualifying for the first Japanese Masters, where they were swiftly knocked out in two 2-0 bouts.

The team made no appearances in Stage 2, with makiba departing the organization in mid May. However, earlier in June, makiba represented Japan in the Red Bull Campus Clutch East Asia regional finals. The team fell 2-0 to the South Korean representatives in the semifinals of the two-day qualifier.

With makiba, Absolute JUPITER eye redemption in Stage 3 of the Champions Tour, after being usurped by Crazy Raccoon — who have recently undergone drastic roster changes — in both Masters 1 and the Stage 2 Challengers Finals.

The team will play in Group E of the first Challengers open qualifier starting on June 4th.