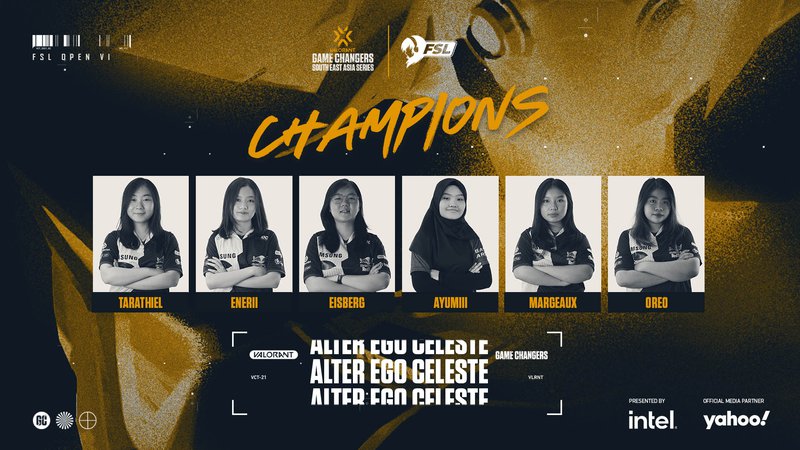 Female super team Alter Ego Celestè made history by winning yet another VCT Game Changers SEA: FSL Open 2021, the team had already won the last 5 editions of the tournament dominating all their competition and this time was no different.

Alter Ego Celestè came into the tournament as the super favorites, the Indonesian juggernauts have dominated the female competition in the SEA region with no team being able to even threaten their supremacy so it was expected they would win this tournament will little to no resistance.

They started the tournament with an easy 2-0 win over Wildfire Sphinx (13-3 on Split and 13-1 on Ascent), the team advanced to the semifinals where they faced Renatus White, the Singaporean team was no match for Alter Ego Celestè that won 2-0 ( 13-5 on Breeze and 13-5 on Split) making quick work of their opponents and advancing to the upper bracket finals.

In the upper bracket finals, Alter Ego Celestè faced off against Galaxy Racer Female probably the second-best team in the region currently.

Both matches were way closer than against any other opponent the team had faced off against in the tournament but in the end, Alter Ego Celestè ended up coming out victorious with another 2-0 (13-9 on Icebox and 13-11 on Bind).

With the victory over Galaxy Racer Female, Alter Ego Celestè punched their ticket to the tournament finals which were a best of five instead of a best of three.

In the finals, they faced a familiar foe in Galaxy Racer Female, that had beaten OG aqua 2-1 and had a shot a redemption against Alter Ego Celestè.

Even though the maps of the final were very close with one of them even going into overtime, Alter Ego Celestè once again bested off Galaxy Racer Female this time 3-0 ( 13-8 on Icebox,13-8 on Split, and 15-13 on Bind).

With this win, the Indonesian organization continues its reign of dominance over the SEA Female Valorant esports scene, winning all the tournaments they have participating in so far and already being qualified for VCT Elite 2021.

Congratulations to Alter Ego Celestè on another title and a great tournament performance overall.