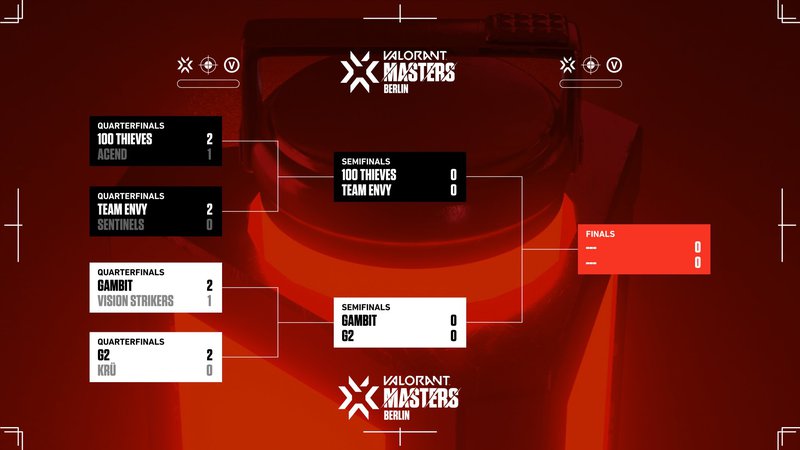 Day number nine is over, Two matches have been played and there will be only two winners, who will play against each other in the Grand final.

Today, Saturday 18 September, G2 played against Gambit Esports, after that, we saw 100 Thieves VS Envy.

Today at 6 pm EET the semifinals started and the Hype is %110, after Gambit played a good game against Vision Strikers yesterday and won 2-1, it’s G2’s turn to face them after G2 defeated KRÜ Esports yesterday by a 2-0 victory and before them, they have beaten Sentinels
By another 2-0 victory.
For this match, G2 banned Split and picked Icebox.
And Gambit banned  Haven and picked Breeze, Ascent.
First-match has been started and GMB won the first round then G2 won 3 in a row then GMB won 3 in a row and the match kept going, GMB got 2 Pistol wins this match, and GMB nAts had a great performance this match 318 ACS and %41 headshot rate, the match ended 13-10 win for GMB.

The second match is crazy … Why ?! GMB won 13 rounds in a row!
Again, Ayaz ‘nAts ’Akhmetshin did great as his ACS was 326 and %44 headshot rate, he is the MVP of the match, GMB won pistol rounds, eco, semi-buy and going full buy of course.
GMB will move to the Grand finals after winning today, and G2 are eliminated and have to say goodbye.

After GMB won, now it’s time to see who will face them 100T or Envy?
For this match, Envy banned Breeze and picked Icebox, Haven.
And 100T  banned  Bind and picked Ascent.
Envy started with much energy and coming in hot, as NV yay had the KDA of 31/9/2 and 449 ACS,  35% headshot rate what a beast.
100T won the first 3 rounds and then NV won 11 rounds in a row and the match kept going till Envy had their 13-5 victory in 40 mins.
In the second match ended in a 13-8 win for Envy as 100T wasn't strong enough to come back, but they tried, 100T won the first 2 rounds, and we thought this is the comeback, but Envy didn’t think so, as they won 3,3 and 6 rounds win streak, at least this match wasn’t one-sided ,as 100T nitr0 had the most kills and 272 ACS with %42 headshot rate, at the end Envy won a 2-0 victory and 100T couldn’t perform a successful comeback, and the American player Jacob ‘yay’Whitaker was the MVP.

With that being said,100T got eliminated, tomorrow the grand final at 6:00 PM EET, Envy will play VS GMB both teams have proven worthy and showed how strong they are, the hype now is %150.
Good luck for Envy and GMB, and hard luck for 100T and G2.