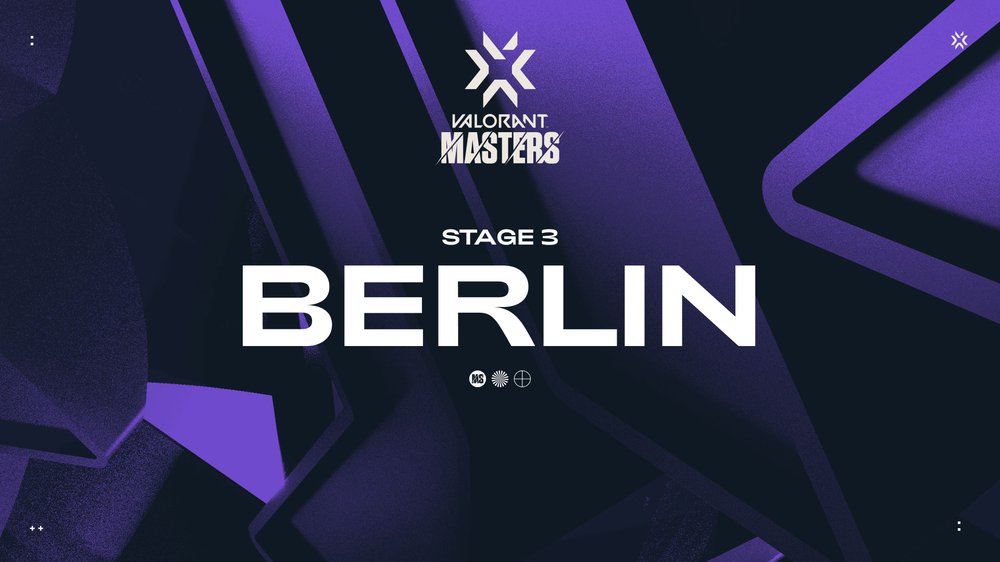 Masters 3 has ended and it was everything we hoped for. We saw flashy plays, big personalities and fantastic strategies. Now that it’s all wrapped up we can finally sink our teeth into all the juicy stats from the event to help us understand the meta more. This can be complex but luckily I’m here to break it all down for you.

Let’s go map by map and see how often every agent was picked, and the most popular compositions at the event, group stage and playoffs included. 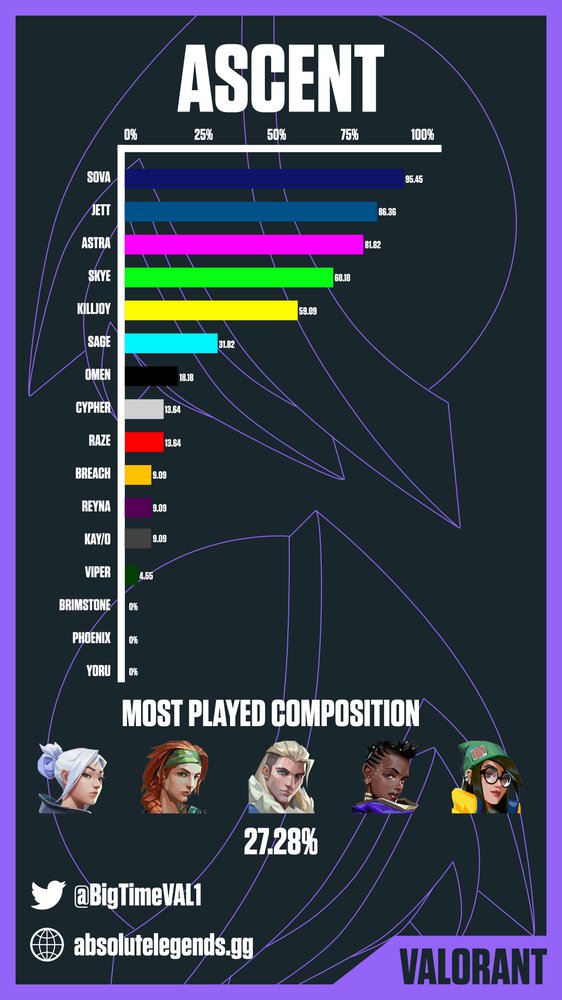 Ascent is one of the most standard, and therefore varied maps in VALORANT, and we see this reflected in the pick rates. There was a wide range of agent picks with only Brimstone, Phoenix and Yoru excluded. Sova comes out on top and this is certainly due to his information strengths as well as the good old “Odin spam” tactic into B main. Astra is also far and away the most dominant smoker here. 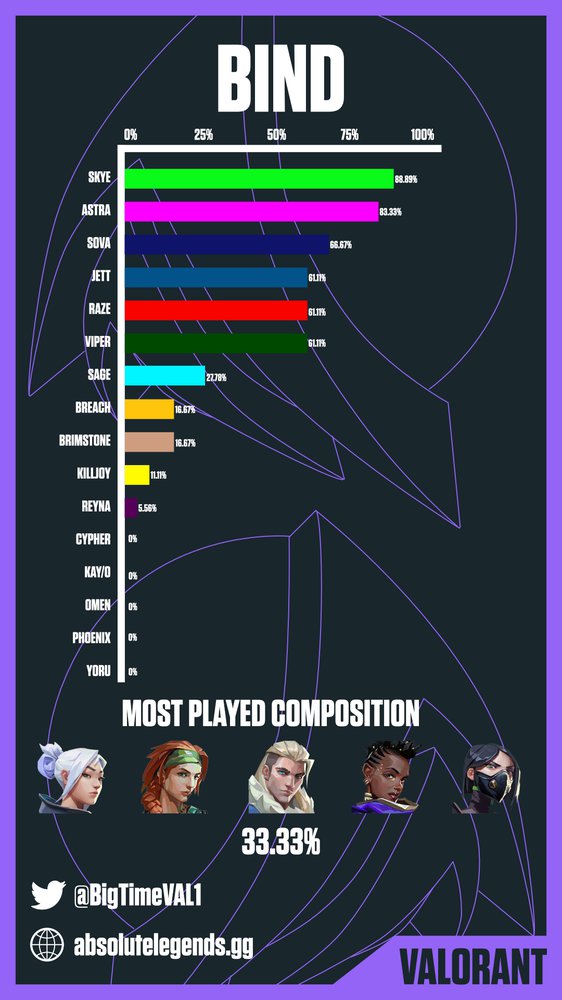 Bind brings slightly less variation than Ascent does, but ultimately the common trends are the same. The first notable point is the rise of Skye here who sits at a 88.89% pick rate. While there is a preference for double initiator, if the top teams had to choose one, most would go for skye here to round out the composition.

The second key thing here is the amount of viper played. We’re seeing the toxic scientist being picked up to fill the sentinel role mostly as well as the secondary smoker. She brings a lot of stall to the narrow entry points of the map and the secondary smokes help make faking easier on an execute-based map. 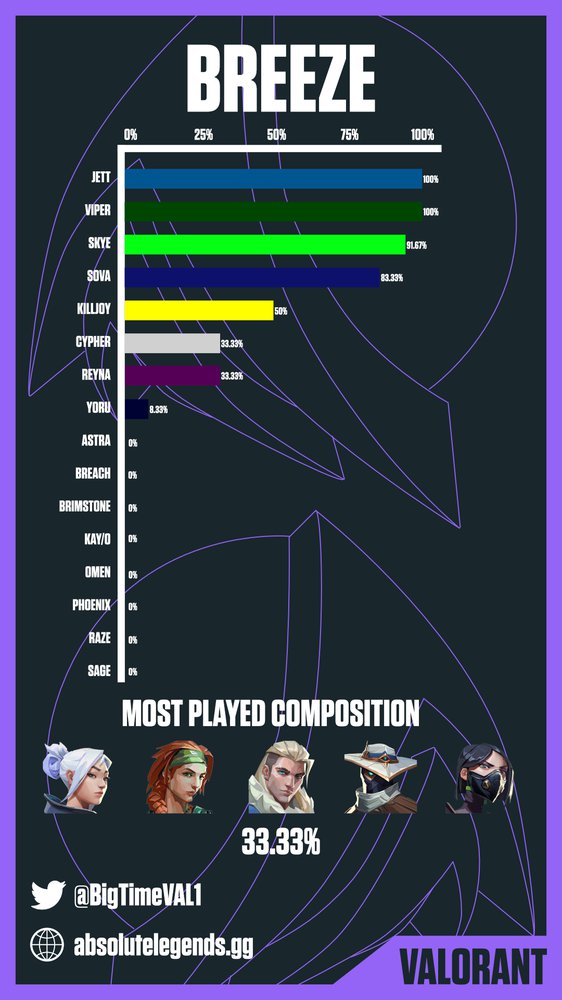 Breeze is the newest map added to the pool so it’s no surprise we saw less of it than everything else. Most teams were not big fans and it acted more like a game of chicken in the map drafting phase than anything else.

Because teams generally neglect it and have had much less time to innovate, we see very little variation in compositions. 4 of the 5 agents in the most picked composition had above 80% pick rate’s which suggests most teams are really playing it safe here. Because of the size and openness of the map, it’s again no surprise to see Jett and Viper with a 100% pick rate.

We did however get to see the one and only Yoru pick here which is very exciting and I hope that royal blue bar grows over time.

Looking at Haven brings us back to earth. Now we can really see the meta of the tournament forming. The most played composition is exactly the same as we saw for Ascent, with Astra dominating the smoker role and the double initiator being commonplace.

We do see the introduction of Phoenix here in the flex slot, and that is certainly refreshing. If we see more tweaks to Skye I would expect this to rise and especially on Haven due to the orb positioning. 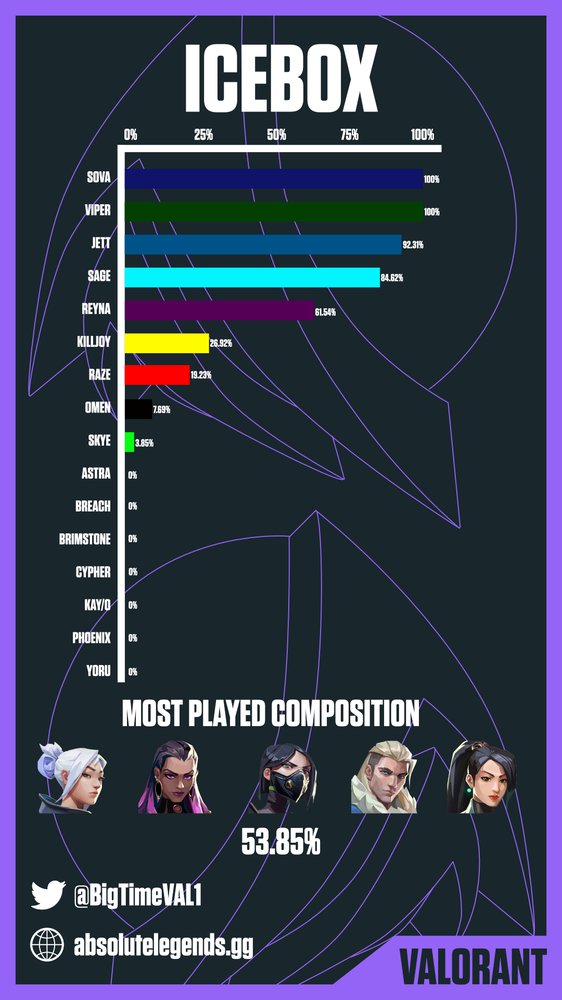 Icebox is by far the most rigid map played at Berlin. The most played composition was picked a whopping 53.58% of the time. We saw spots of Raze from G2 and Omen from 100 Thieves but realistically there’s not much that we didn’t already know going on here.

However, it is worth saying that in the latest patch the map has been changed. The B site radianite box is no longer bangable. This might be the catalyst that top teams need to innovate more and particularly try more sage-less compositions. 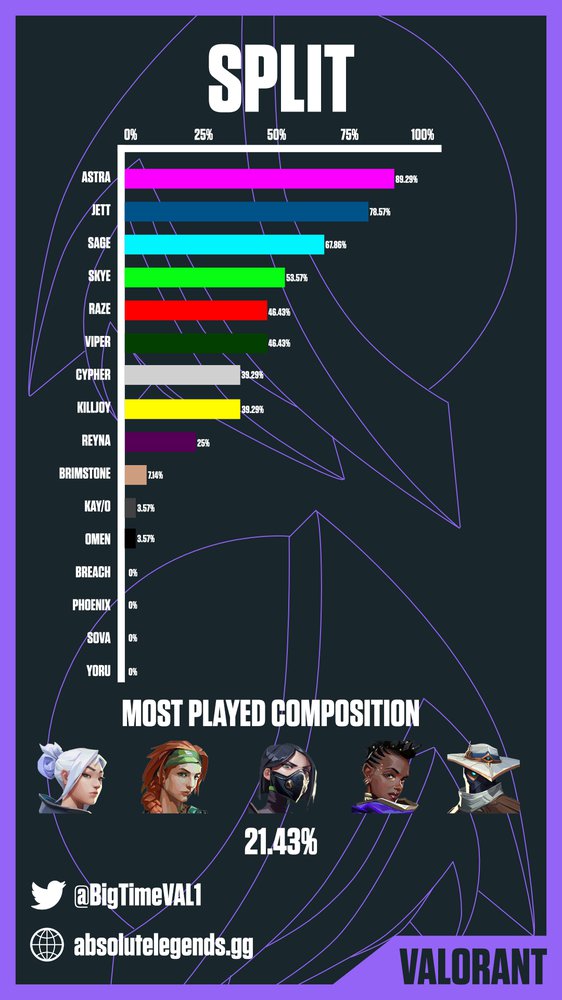 Finally, we have split. Because of the absolute absence of Sova, we see Viper take his place and Cypher takes the sentinel role. Teams are clearly opting to be more defensively minded on this map and are trying to stick to the theme of having lots of utility to play with. A notable mention goes to Raze who sees a dramatic uptake in pick rate here because of the value her kit can find in the tight spaces of the map. However, it’s still not enough to topple the raining duelist queen, Jett.

The Berlin meta certainly was interesting. We saw teams almost always favour mid-ranged, utility-focused comps that can both default and execute in equal measure. This is characterised clearly by the double-initiator meta being adopted on most maps.

We can clearly see which agents are at the top of the food chain here. Jett is in every single most played composition and boasts the highest overall pick rate of 87.50%.

Astra is still reigning supreme over all the other smokers even after the nerfs she received, I feel this is due to her flexibility and amount of utility available. This very much fits into the common meta and until there is a large playstyle shift, she will still be favoured over Omen and Brimstone.

This meta made for a fun tournament and barring any huge changes before champions, I expect the numbers to look very much the same. I don’t think this is a bad thing as it allows the top level of players to truly master their agents and strategies. Going into the next season of VALORANT though, all bets are off on what will change. I hope to see Jett nerfed to allow other duelists to shine and some changes to the other controllers and hopefully, the game will remain fresh. The agent structure of the game brings many meta’s overtime and I can’t wait to break more down.

How To Check Your Playtime in VALORANT
It's been two years since the release of the shooter from Riot Games - VALORANT. Millions of players from all over the world have played this game at least once. Tens of thousands...
07/07/2022

How 100 Thieves beat Gambit
A breakdown of how 100 Thieves' off-meta icebox composition gave them the edge over Gambit with a structured game plan and great execution.
16/09/2021

How to Uninstall Valorant
Sometimes you just get tired of Valorant or you want to reinstall the game to see if it's going to fix an error you've been having and can't seem to solve. Gamers always delete th...
05/02/2022

Harbor Agent Lore | Sir Jeppy
Hey everybody Jeppy here and welcome to Harbor's Agent lore video! I'm so stoked to share with you guys everything we currently know about Harbor!
26/10/2022

VALORANT Icebox Map Guide
Take a look at how to play Icebox, one of VALORANT's most controversial maps
07/02/2022
Comments
No comments yet
Please login to leave a comment.
Login
Matches
Upcoming