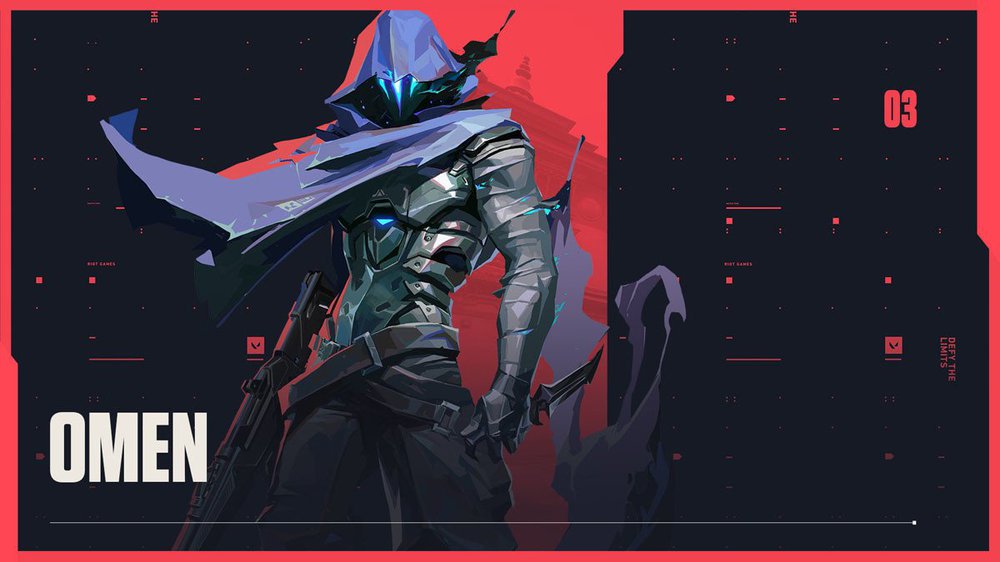 Omen is one of the four controllers in Valorant. Just like the other controllers, Omen's job is to also help his team gain control of the map. He does that by blocking the vision of the adversaries.

He was been out since the beta phase of the game, and in the beginning, was a very popular agent. 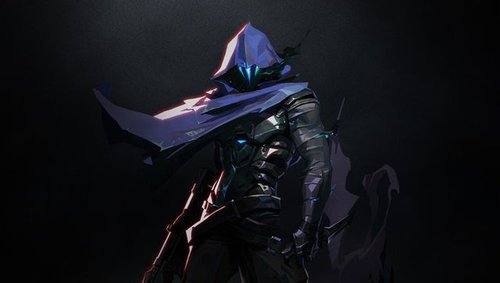 But let's take a deeper look into Omen's abilities, and how you can utilize them to your advantage.

An in-depth look at Omen abilities

Omen is viewed by many as the worst controller agent in the game. It's not like he is super weak and you can´t find value with him. It's just agents like Astra and Viper are really strong and overshadow Omen. 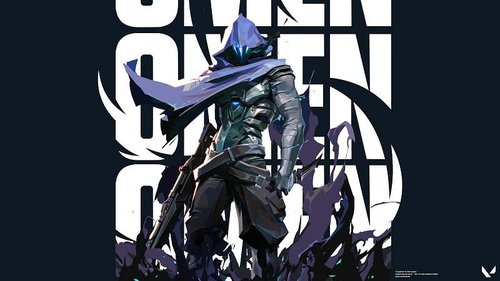 He is not a difficult Agent to play so that is a plus. Despite other controllers being better you can still find value with him on specific maps, and against some team compositions.

Omen equips the ability to see its range indicator, he can then left-click beginning a brief channel, teleporting to the marked location. 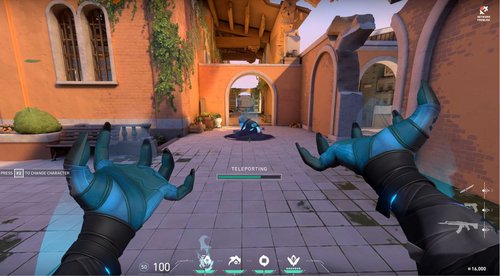 Shrouded Step allows Omen to easily access some areas of the map. He can teleport on top of cases where otherwise he wouldn't be able to get. Omen can also teleport through Cypher trap wires or Killjoy alarm bot without triggering it.

Good Omen players will also fake teleport. This way they can trick the enemy into thinking they moved locations.

Paranoia allows Omen to throw a projectile that goes through walls. When it hits an enemy it reduces his vision and deafens him. The opponent gets Nearsight. 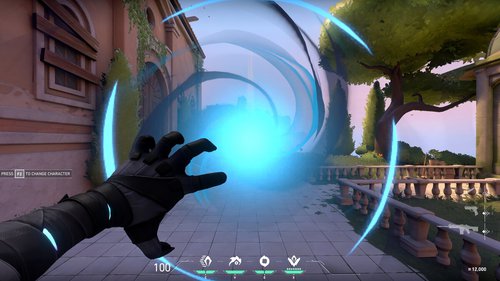 This ability is normally used to help his team get control of choke points on the map. The enemies get Nearsight when Paranoia hits them meaning they can only see what is really close to them. Their audio is also dampened.

It is easier for Omen's teammates to execute into a site or a small area of the map after he uses Paranoia. It's similar to a flash but you can dodge his Paranoia. However, once you get hit with it you will be affected for 2.2 seconds which in Valorant is a lot of time.

Omen equips a shadow orb and can place it anywhere on the map. He then presses the ability key again to throw it to its marked location. When it arrives there it will create a large shadow sphere that blocks vision. 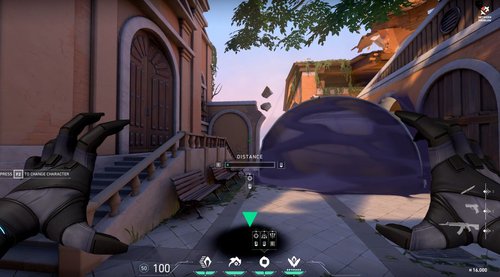 Dark Cover is essentially a smoke. It allows you to block vision on spots on the map. Making it easier for your team to execute into bombsites by blocking the enemy's vision.

However, Omen smoke is probably the worst in the game compared to the other controllers. Not only does he have fewer smokes to use simultaneously, compared to Astra and Brimstone. But his smokes also don't block as much vision nor last as long as his controller's counterparts.

You can still find value with it since you can place them anywhere on the map, and block the enemy's vision. They just don't last as long, take more time to get to their destination and "transform" into a smoke.

Omen ultimate allows him to teleport anywhere on the map. Omen chooses a location to teleport to. There a shade on the form of Omen will appear and after a brief time, he will be teleported to the spot. When using From The Shadows enemies will hear a sound that lets them know Omen used his ultimate. 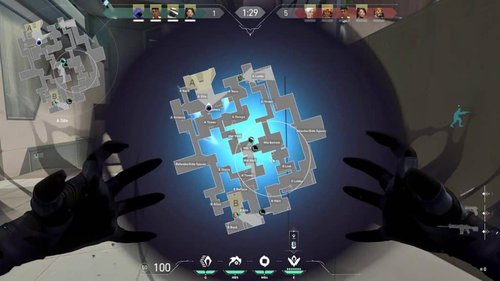 While it sounds fun to teleport behind enemy lines, in most cases it doesn't work. Enemies are well aware of what Omen ultimate does and the best spots where he can teleport to. This results in enemies destroying his shade and canceling his ultimate.

You can still find value with is ultimate but in very specific and rare situations. It's safe to say Omen ultimate is the weakest in the game. If you compared it to the ultimate of other controllers like Viper Pit, Cosmic Divide, and Orbital Strike, you truly see how useless his ultimate is.

How you should play with Omen

You have to set up your team for success. This means blocking vision on important parts of the map, using paranoia to help your team win control of areas of the map.

Using Shrouded Step in a smart way can also help you catch enemies off guard. Smoking one spot on the map and then teleporting there is one thing that can play to your advantage. Since the opponent won't know where you teleport, sometimes you can catch them from behind.

Overall you want to do your job as a controller, which is making it easier for your team to gain control of different areas of the map and help them execute into bombsites.

The main weakness of Omen is that the other controllers are better than him. Astra does a better job as a smoker, Brimstone as well. Astra also as a more complete kit making here a more well-rounded and complete controller.

Brimstone smokes are better than Omen smokes, and you can also find much more value with his ultimate. It's also hard to find any map where Omen is a better option than the top two controllers ( Viper and Astra). 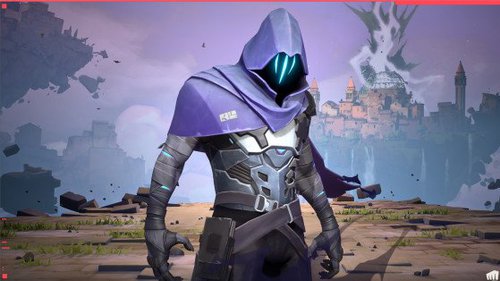 On maps where Astra is not as strong, Icebox, Breeze, Viper is unreplaceable on those maps. Professional players say it's impossible to play Icebox, and Breeze without Viper.

Omen on his own is an ok agent, but when compared to others he is one of the weakest agents in the game. He has a plus which is being easy to play but apart from that the other agents are simply just better than him.

Valorant Haven Map Callouts Guide (with images)
In this article, we will guide you throw all the callouts on Haven. From the basic callouts to the more detailed ones.
17/02/2022
3296 Views

Chamber Valorant Guide
An in-depth Chamber Valorant guide that will explain everything you need to know about the Agent and the best way to play with it. From his strengths to weaknesses you will find e...
13/01/2022
1928 Views

VALORANT Map Guide Split
This is the only Split guide you'll ever need guiding you through all the basics as well as how to attack, defend and who to pick.
15/02/2022
1753 Views

Collection Of All Phantom Skins and Variants in Valorant (2022)
There are a lot of great Phantom Skins in Valorant, some styles appeal more than others but you have plenty to choose from. If you are looking for a Phantom skin but don't know wh...
14/05/2022
1223 Views

How to Save a Replay in VALORANT
The review of your personal games is one of the effective way to improve yourself in any game. This way you can find your mistakes that have been made, because they are very diffi...
28/05/2022
1747 Views
Comments
No comments yet
Please login to leave a comment.
Login
Matches
Live