VALORANT: How Do the Pros Play Jett? 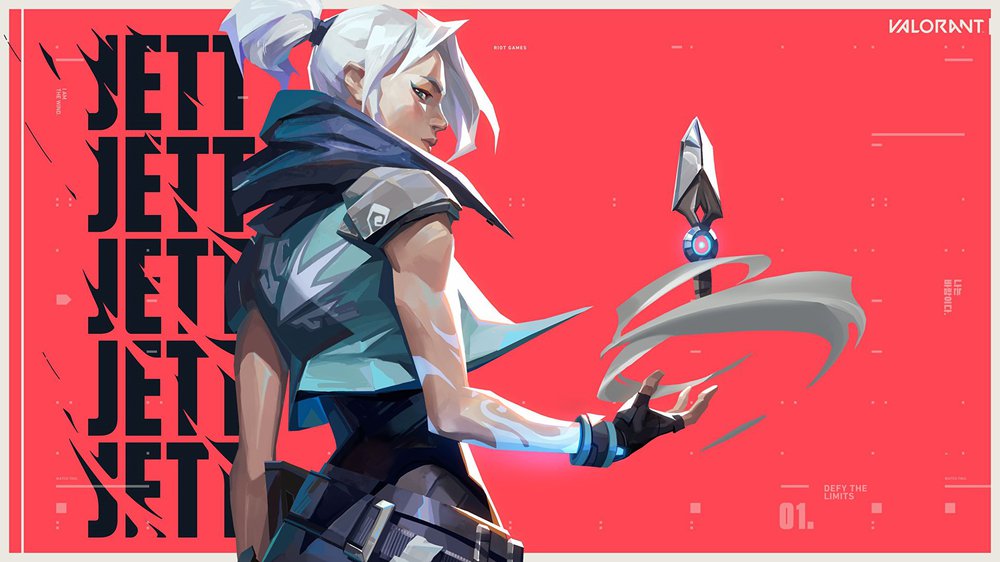 In this series of guides, I’ve been walking you through how the pros use every different agent in competitive play. Today I’ll cover by far the most popular agent in the game, Jett. After a short time in beta, people quickly figured out her strength and she’s been meta ever since. Let’s look at her pick rate at champions.

Jett was the most picked agent in this tournament and pick rates in the high 90’s in most maps. Even her lowest pick rate is 50% on Bind which is still pretty good. This should be a huge indicator of how powerful she is and she absolutely cannot be overlooked. 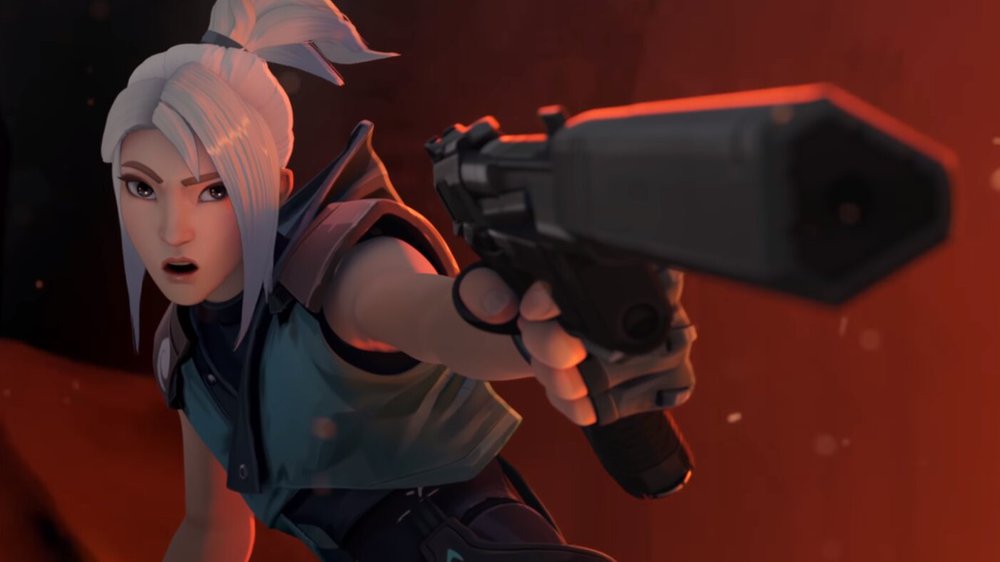 How does she fit the meta?

Simply put, Jett IS the meta. Honestly, she defines it more than anything, there isn’t a team around that doesn’t play her in some capacity. She brings the necessary aggression to execute on sites with her dash and is easily the best agent to capitalise on her team’s supporting utility.

A huge part of the meta is being able to use the Operator effectively, especially on the defender side. Jett is by far the most capable user of the OP in the whole roster. The OP is without a doubt better on the most open maps and this is so clearly reflected in the pick rates. 100% on Breeze and Icebox (the most open maps), in the 90’s for Ascent and Haven (The more mid-sized maps), then a drop to the 50% range for the smaller maps (Bind and Split).

CLOUDBURST: This is a handy little smoke that fills a lot of uses. It has a relatively short duration but this doesn’t limit its effectiveness. The most typical use is throwing a smoke to dash into on site, but is also great just to quickly cover angles that a full smoke would be wasted on. One cheeky use is throwing a cloudburst on top of an opponents recon bolt. This can make them think an area is clear when in fact you are waiting.

UPDRAFT: Updraft is part of what makes Jett particularly hard to read. Use it to get to elevated positions that your opponents will most likely not be pre-aiming. This is particularly effective whilst using the OP. Great examples can be on top of generator on Icebox, or on a pyramid on Breeze. 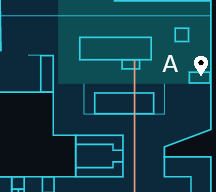 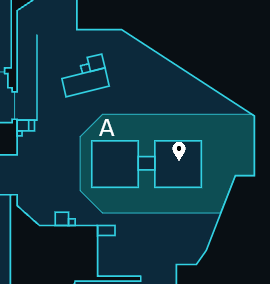 Also use this with your ultimate to turn into a floating death machine. The options this ability gives are endless so always try to make use of it.

TAILWIND: Tailwind is Jett’s signature ability and it allows her to dash in a direction she chooses. This is essentially a get-out-of-jail-free card for her that allows you to play crazy off-angles, take a shot, and get away (again this is exaggerated with the OP). As I spoke about previously, tailwind is also great for dashing into site, ideally into your own smoke. Doing this will displace the crosshairs of your opponents and allow your team to follow behind you more easily.

BLADE STORM: Jett’s ultimate, blade storm, is an excellent tool with several strong uses. The primary use we see is eco rounds. It’s a great substitution for a gun as it is still a one-shot headshot. Because you will be the primary OP user, it’s also great to use as a backup. For example, retaking with the Operator is very tricky so the blade storm gives you a lot more versatility.

DRIFT: Drift is a passive ability allowing her to hover and glide down to the floor instead of just falling. This should mean you never take fall damage and is often combined with both the updraft and ultimate to allow you to float in the air and shoot your knives with no inaccuracy (very very balanced, thanks Riot).

Let’s look at her pro’s and cons at the competitive level. 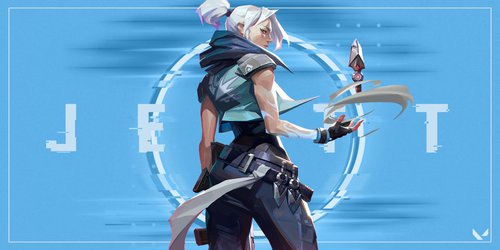 Playing Jett is so unique because your role is generally the *star* role within a team. This generally means you get given the most help and support and are commonly set up to succeed. A good Jett player will be able to capitalise on any opportunity that their team can create.

On the attacker side, your main job is to entry. This means consistently being the first person onto the site, trying to create space for your team. A big mistake I commonly see is Jett players taking too much pride in their KDA. If you go into site and get traded you’ve still very much done your job. Spacing is also important in these situations. Being too far ahead of your teammates makes you untradable and is a cardinal sin of playing entry.

When you’re not bursting a site and are defaulting, you should generally still be aggressively positioned. Typically you should be with your initiator as they use their utility to allow you to take space. You want to be fighting the most contested spots and leave your more defensive teammates to hold the other more passive areas of the default

Now let’s look at the defender side. As I’ve talked about this whole article, Jett is by far the best with the operator so if you’re comfortable with it, it’s a worth pickup on the defender side. If you do go for this, it goes without saying you want to try your best to stick to long sightlines to maximise the effectiveness of the gun. This certainly doesn’t mean you can’t be aggressive though. Use the utility from your initiators to get you onto a deeper off-angle. Once you’re posted up you can get early information on the opponent’s rotates and if they pressure you, you can take one shot then tailwind away and cloudburst to cover your retreat.

An OP isn’t an absolute must though, there are plenty of great players who make it work with minimal use of the weapon. It’s important to understand though that Jett is not a passive agent, if you just sit backsite every round and wait you’re definitely doing it wrong. Try to make sure to use all of her kit (and fantastic escape ability), to have the maximum impact in the round. Taking aggressive space gives you a lot of map control and information to be able to rotate from, and you can easily leave if you feel too much pressure.

There is absolutely no shortage of Jett players to watch and learn from. Depending on how much you like the Operator. If you like the operator look more towards cNed, Derke or Yay, and if you prefer to lean away from it, look at Scream or Tenz. I’ll also give a special mention to my personal favourite Jett player, d3ffo. He is by far the most selfless Jett who really gets a lot done for his team with much more limited support than other players in his role. If this is something that interests you I’ve written more about him and you can read about it here. 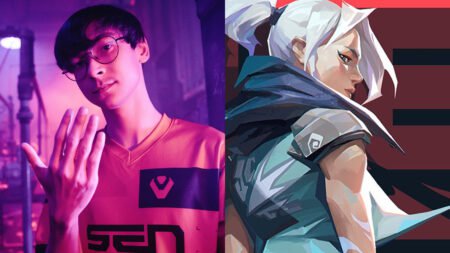 Jett is VALORANT. It’s a simple as that. She is by far the most popular agent at every level of play and honestly, I don’t see that changing any time soon. If you want to play duelist Jett is definitely the place to start. There is no one more meta defining or important so learning to understand Jett really is important for everyone.

How To Jiggle Peek In Valorant
Want to know how you can efficiently jiggle peek in Valorant to gain information? Check out this guide where we tell you how you can do it!
18/12/2022

How To Appear Offline to Friends in Valorant
This results in players looking for ways to turn invisible in-game and appear offline to their friends in Valorant. But, Riot has not provided a built-in option that allows player...
28/06/2022

How FOKUS plays Fracture
FOKUS entered Valorant a couple of months ago, but already had notable results. Firstly, they won VRL 2022 DACH: Evolution Stage 1, then booked a ticket for EMEA Challengers 2.
18/04/2022

VALORANT Map Guide Bind
In this guide I walk you through everything you need to let you dive right in to one of Riots original VALORANT maps, Bind
15/02/2022

The Best Cypher Cameras on Ascent
Cypher is a unique and effective sentinel in VALORANT. Many players like him and often use him in matchmaking and pro matches. Ascent is one of the maps where Cypher feels good. H...
02/08/2022
Comments
No comments yet
Please login to leave a comment.
Login
Matches
Upcoming