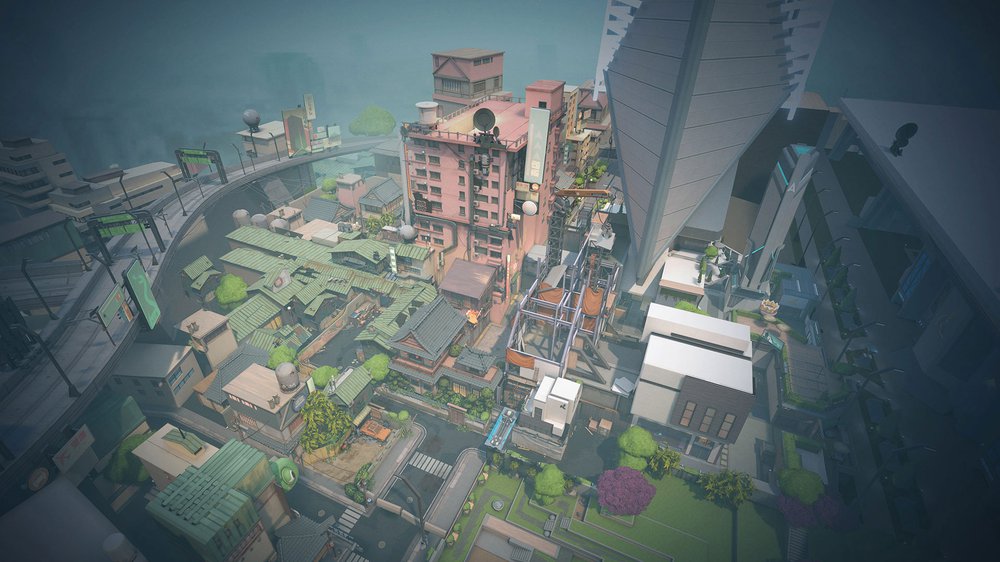 Split is one of the most defensive side maps in Valorant. The map is very small, having probably the smallest "mid" of all the maps. Since it's easy to block the entrances or cover them, the attacking side normally has a tough time on this map.

Split gimmicks are the ropes that allow the players to quickly rotate. 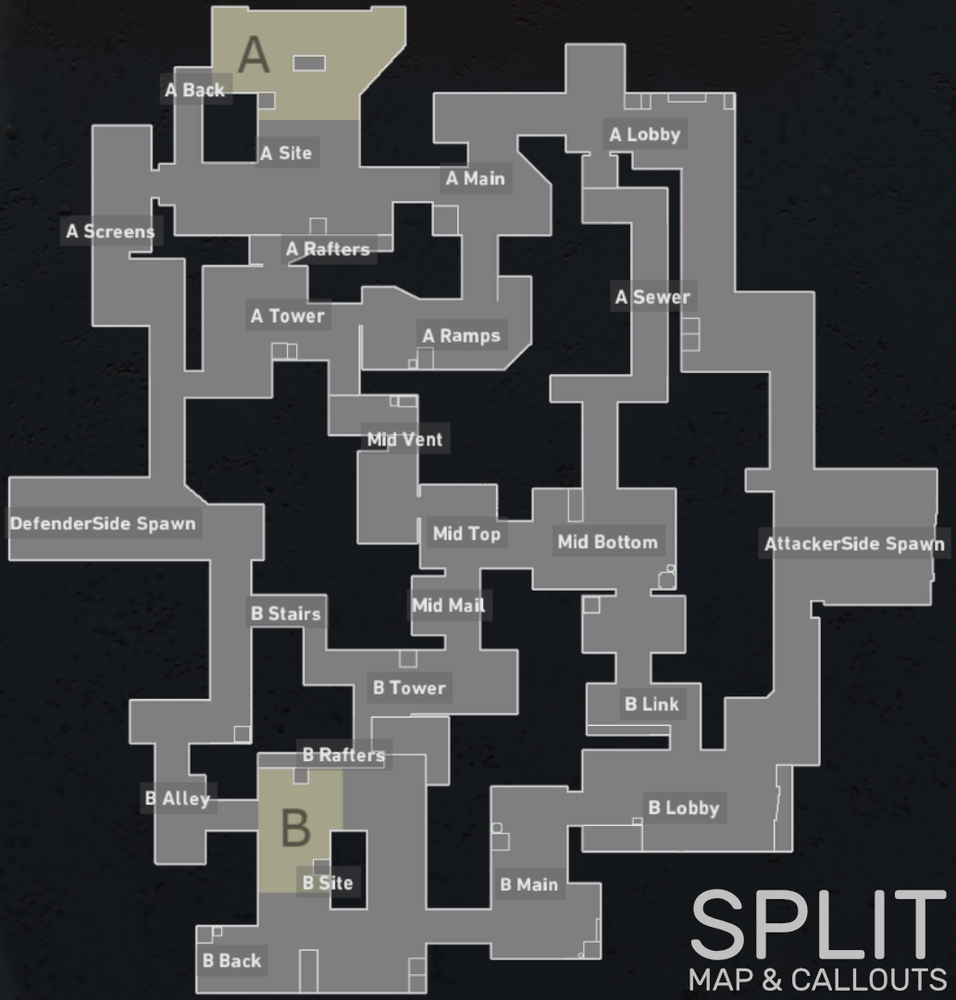 This image gives you the most basic callout of the map. However, there are some callouts that don't show up there. If you want to learn how to play Split check our Split Map Guide.

A Bombsite Callouts on Split 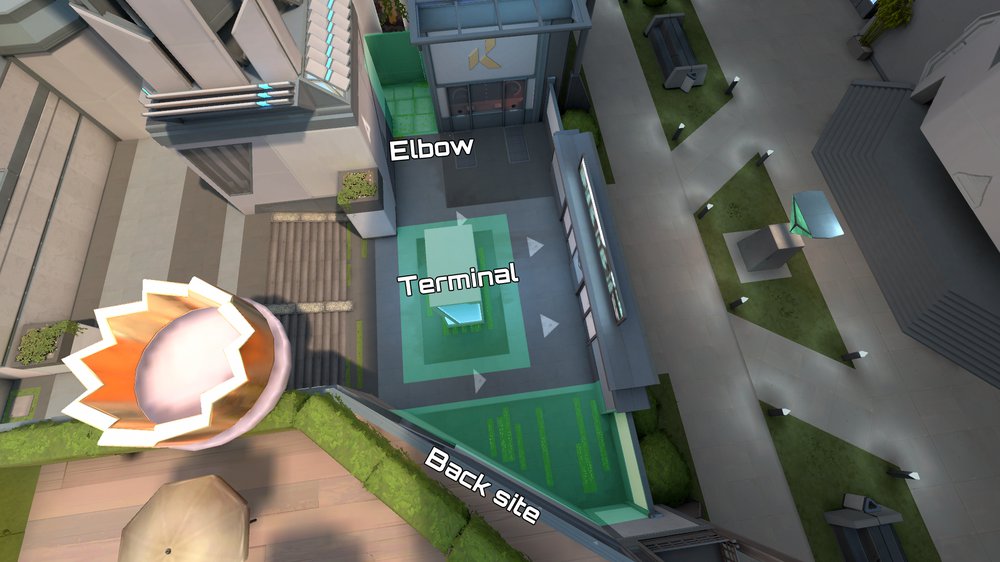 Starting on the A bombsite you have elbow, it's a spot where you can see the people that push from screens. For the defensive side, it's one of the paths you can use into the bombsite when you are playing retake.

Terminal is the name of the holographic box that stands in the middle of the A bombsite. Sometimes it's used as a place to plant the spike since you can wall bang it. You can also use it as cover if you are holding the bombsite, be it on the defensive or the attacking side.

The back site is a more concealed area of the bombsite. People that are on A rafters or A tower can't see you if you are playing back site really close to the wall. It's also a really common plant spot. 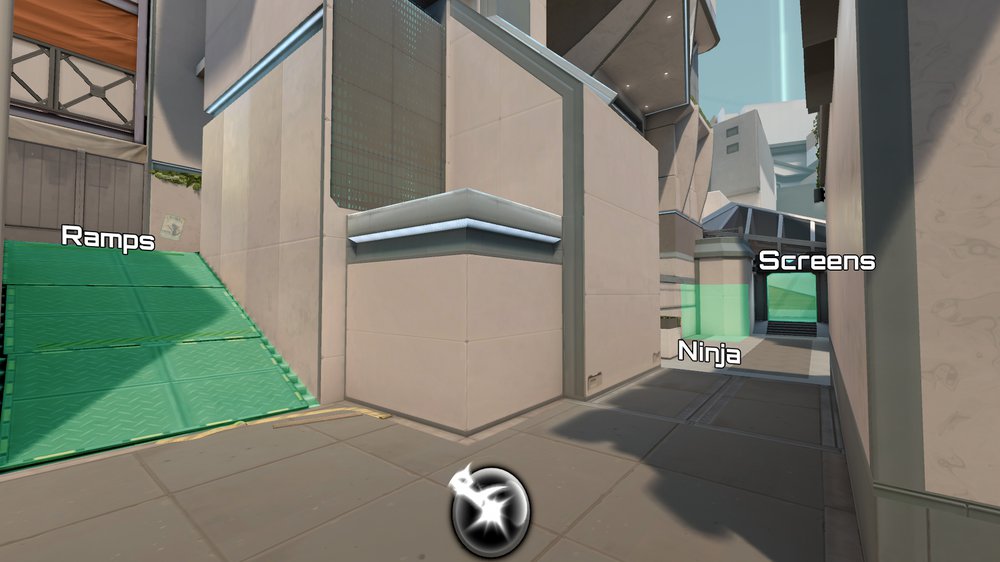 Ramps are what attackers use in order to get to A tower, while defenders sometimes play there to prevent the attackers to reach the A tower.

Screens is a location where the defenders can see the attackers cross into ramps or enter the bombsite. It's also really used when playing retakes since is really a close pathway to the bombsite for the defenders.

Ninja is a spot the defenders normally use to hide and wait to catch an enemy off guard. 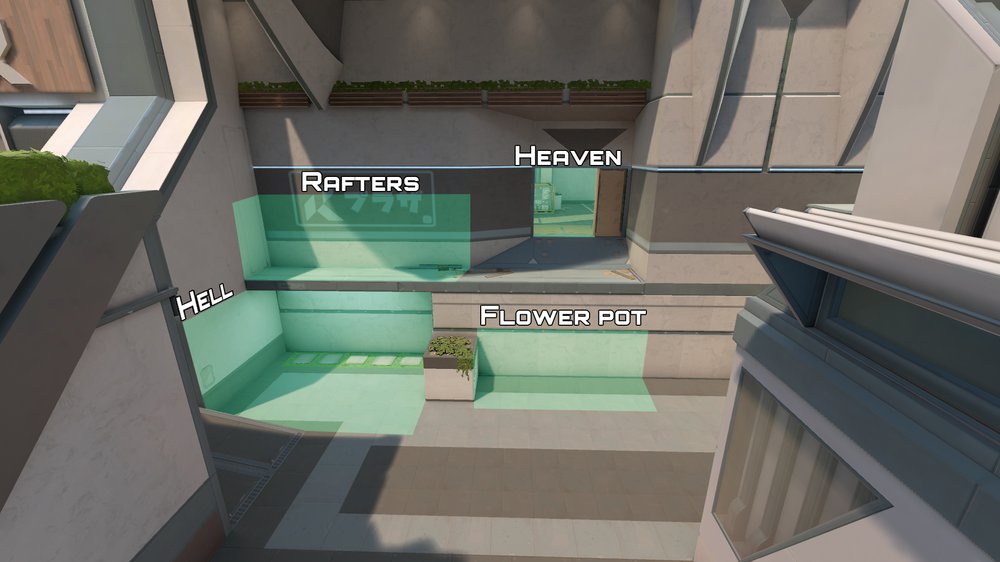 From Heaven, you can see most of the bombsite. It allows you to see who crosses to the bombsite. You can also plant the spike towards even, its one of the most exposed plant spots in the A bombsite.

On Heel, players have an advantaged angle towards the players' entering from A main. However, it's a position in which you may be able to get one or more kills but will most likely be traded since you have nowhere to escape to.

It allows you to catch the enemies by surprise when they are entering the bombsite since it's not very commonplace to play from. However, similar to Hell you have nowhere to retreat, and will most likely be traded if you manage to get any kills since this spot does not necessarily give you a great angle advantage.

Rafters allow you to see all the back site and also the people that enter by A main. It can be used on retakes to take the information of the players on site. However, you are very exposed when you play on rafters.

B Bombsite Callouts on Split 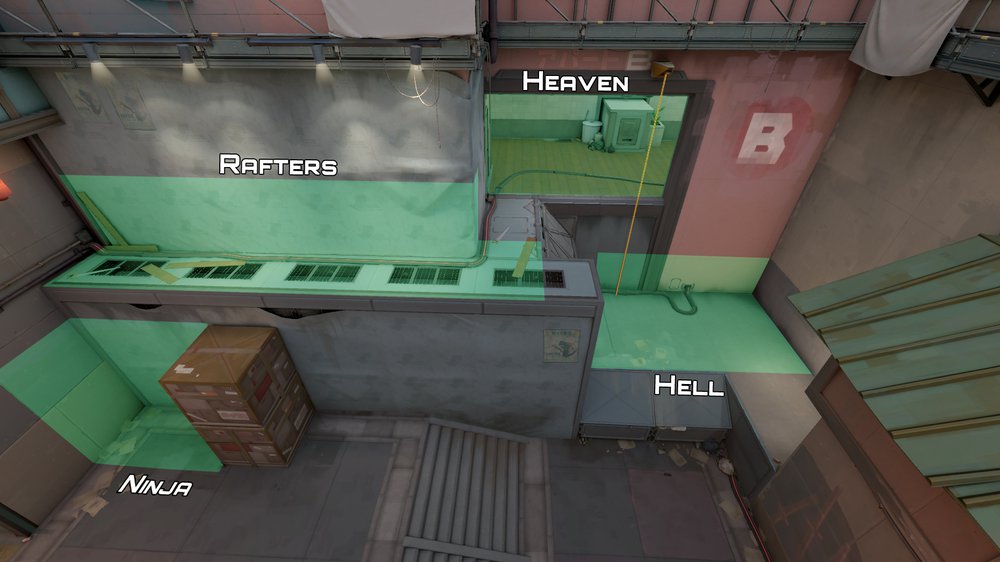 Ninja just like on the A bombsite is a position used for the players to hide and try to catch someone off guard. It can also be used by the attackers since it gives them a really close and advantageous angle for the players entering from B alley.

Rafters are normally used by the defensive side players to get a higher view of the bombsite. It also allows them to see the attacking players cross to the bombsite, even if they use a sage wall to protect them and block the vision while on rafters you can see over it. However, you are really exposed on rafters.

Heaven is the area where you can see the attacking players crossing into the bombsite. Mid-players will normally rotate to Heaven in order to help the b bombsite players. It gives you an advantage viewpoint to the bombsite.

Hell is a common spot to play when you want to give the bombsite and play retake, or when you are watching B tower. It's a really concealed spot, and it's very hard for the players that are getting out of the tower to clear you 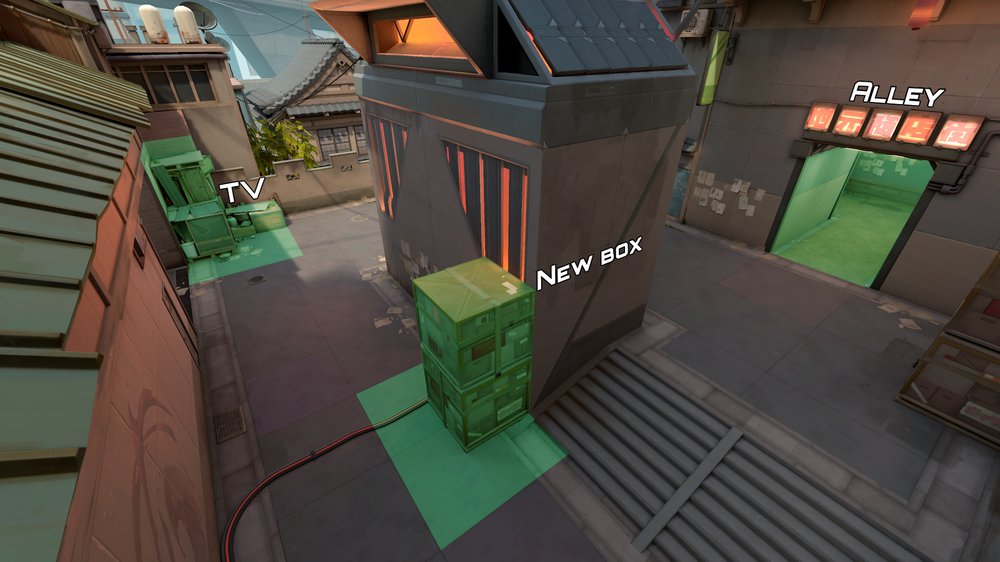 Brown box is used as a cover spot for both the defenders when holding the cross to the bombsite, or the attackers when playing post-plant.

Tv is a spot where defenders can play, it gives them a good angle, while for the attackers it's a really hard angle to clear. Despite giving you a great chance of getting one kill your chances of getting away after are really low and you will probably be traded.

Alley connects the defender's spawn to the B bombsite. Defenders normally use alley as a defensive position when they want to play retake. It's also the best entrance to the bombsite when coming from the defensive spawn. 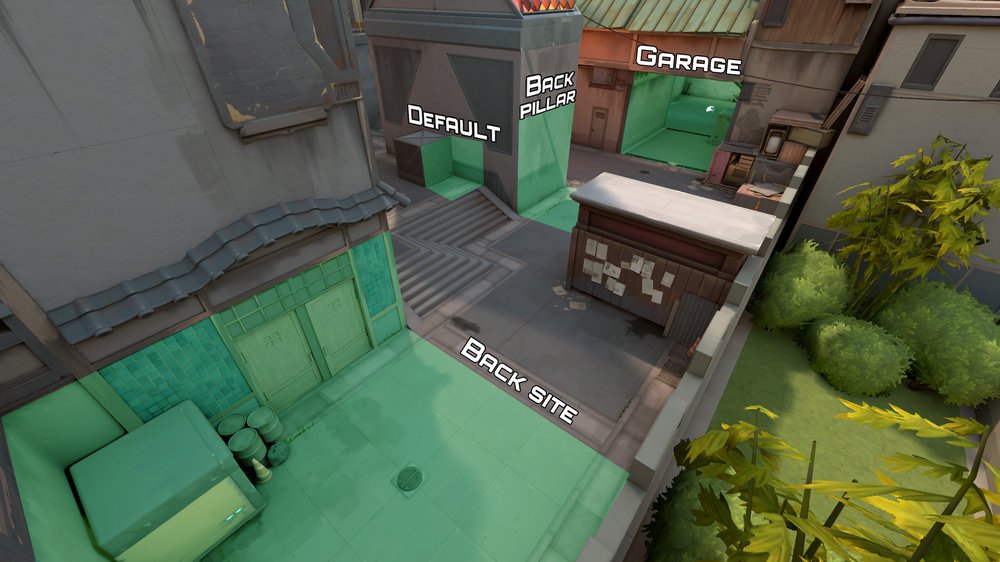 The back site is a very common position for the attacking players to play post-plant. It offers you good cover, and you have the angle advantage since you will see the enemies first when they try to clear that spot.

Default is the most used plant spot on the B bombsite. It's the safest spot to plant since the metal box protects you from the enemy fire, and enemies can't really see you unless they push deep into the bombsite.

It can be used by the attackers to crossfire, to take cover from heaven and rafters, it also allows you to be relatively safe while holding the angle for the garage.

The garage is where one of the ultimate orbs is placed. It's also the main entry point for the attackers to the B bombsite. 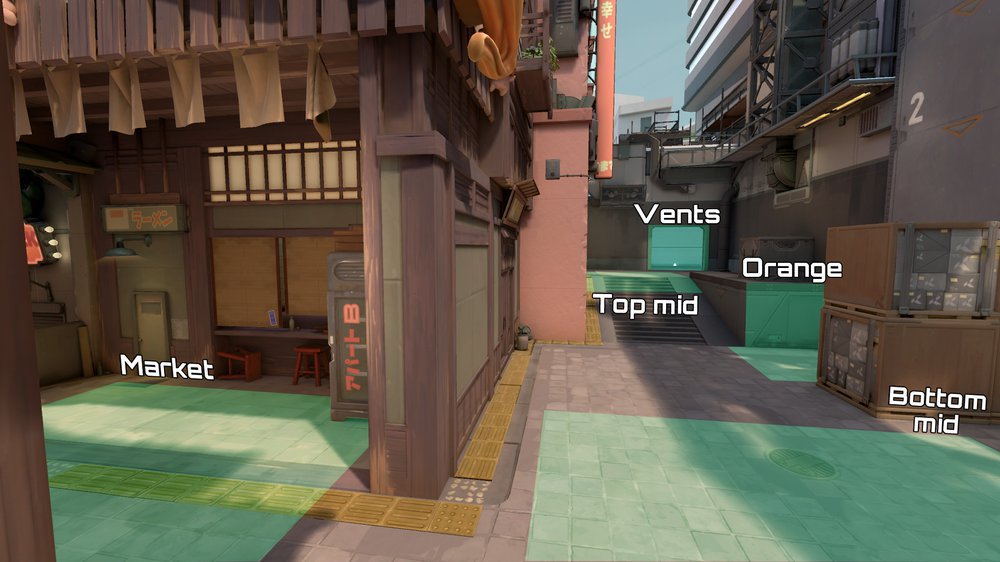 Vents are a really common spot for the defenders to play, especially with an operator. It's also the shortest path to the A bombsite since you can take the ropes to get to A tower.

Market connects the B Lobby to Mid, it's the fastest way to get to mid.

Top mid on the other side is normally controlled by the defenders. It's not easy to gain control of top mid from the defenders since they can normally have one player on vent, and the other on Mid mail. You are also exposed to two locations at the same time when you are on top mid.

Orange can be used as a spot to hide and wait for a rotation. For the defenders, it's a really good spot to control since it gives you control of mid, and you can ear and see everyone that tries to reach top mid. 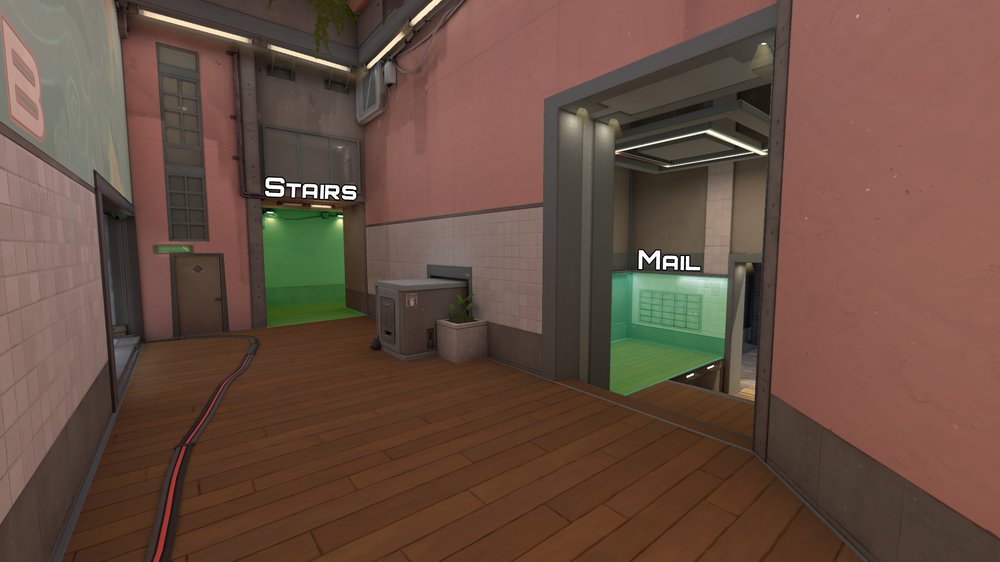 Mail is the position normally used by the defenders to hold the mid-rushes. It also connects mid to B Tower.

Stairs connect the defensive spawn to the B tower. Is the easiest way to access B-tower by the defenders.

How to Surrender or Forfeit in Valorant
Valorant, provides you the opportunity to surrender or forfeit the game immediately. In Valorant, you can surrender in both unrated and competitive games. We're here to assist you...
10/04/2022
1988 Views

Chamber Valorant Guide
An in-depth Chamber Valorant guide that will explain everything you need to know about the Agent and the best way to play with it. From his strengths to weaknesses you will find e...
13/01/2022
1928 Views