Onur deal with LOUD falls through in an unexpected way 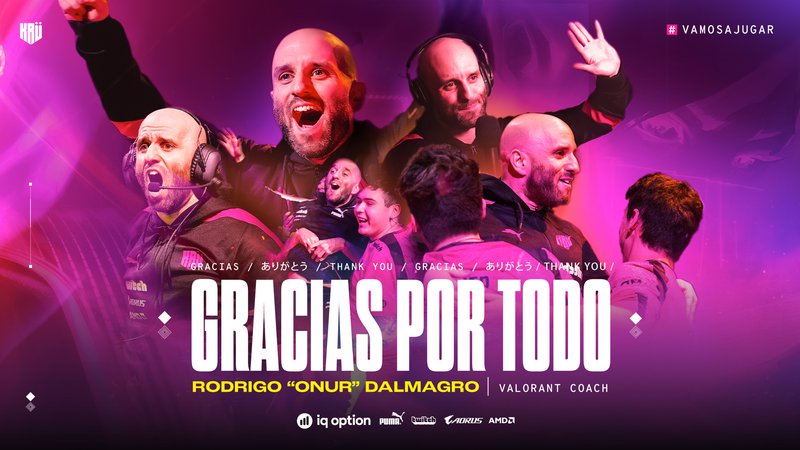 Rodrigo "Onur" Dalmagro is one of the best coaches in the Valroant scene right now. After a year of domestic domination, and great results internationally with a top-four finish at Valorant Champions the coach was a hot commodity.

The decision to explore free agency and subsequently leave KRU Esports surprised most fans and people in the industry. Onur said he wanted a new challenge. The coach said he knew if he stayed in KRU Esports he would be coaching the best team in the region. He never liked easy things in life and so decided to ingress in a new adventure.

LOUD was the project Onur was talking about. The Brazilian Esports giants will enter the Valorant competitive scene this year with a rumored roster that has every ingredient of a championship team.

However, an unpredictable turn of events saw the coach, that was already in Brazil ready to put pen to paper, ultimately not joining the organization.

Everything started when Onur tweeted about being close to being deported from Brazil for not having his health passport updated. Also saying that freedom didn't win.

The tweet wasn't received well from the Brazilian public. A lot of influential people from the scene responded to Onur saying this like " what is that freedom that puts the lives of others in danger?" said Riot Games Brazil Valorant caster Gustavo Melão. Many others had similar replies.

In a later tweet, Onur clarified that he wasn't anti-vax. He actually agrees that vaccines. especially on people that belong to high-risk groups, are necessary. However, he said he didn't agree with the health passport and was willing to lose a job in order to be truthful to his beliefs and ideas.

Today Onur addressed all the controversy that happened

The coach said that LOUD was aware he wasn't vaccinated and that he didn't have the intention to do it. He made sure to explain that despite being in very advanced talks with LOUD they didn't have a legal agreement.

LOUD always tried to help the coach in regards to the deportation problem. However, after the controversy on social media erupted the organization, because of public image, decide to take a different curse of action, and Onur says he understands and respects that.

He also spoke about the reaction on social media. Sayin' they were toxic and unfair. Especially from the people that are important in the scene and have a big fan base. Onur felt that type of reaction from those people only added more fuel to the fire and generated free hate.

He further goes into his opinion about the vaccine and the health passport similar to what he said in the second tweet of this article.  Wishing "people start to be more tolerant of different opinions".

We've seen many deals in esports fall through but not because of something like this. In the end, it was something that was made much bigger than it is. Brazil requires an updated health passport to enter and work in the country while Onur is against the health passport.

He was deported from the country because he remained true to his ideals, and ultimately had a different opinion on the matter, and that should be it.

Onur has the right of not wanting to vaccinate the same way Brazil has the right to have stricter rules about health, especially in the time we live right now.

I am in favor of vaccination, but I also understand that each individual is free to do what he thinks is better for him, and that was what Onur did. I think we just have to respect it even if we don't share the same opinion.

Now with Onur being available as a coach, many teams will be interested in the services of the coach, and a potential return to Kru Esports is also something to look out for.