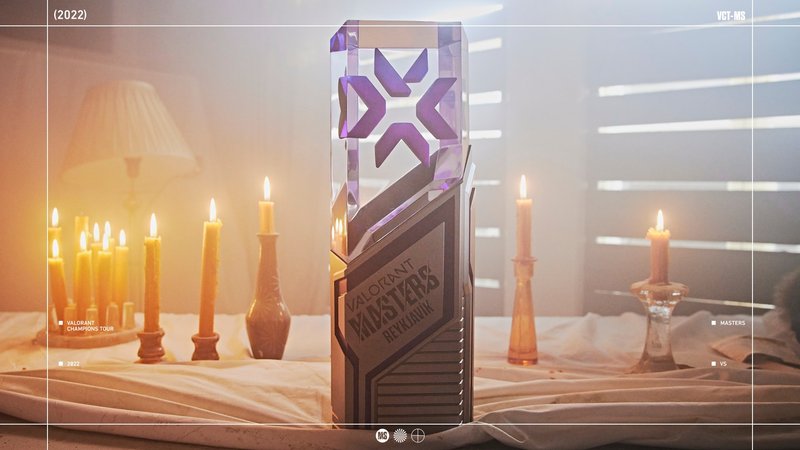 It was a best of five series, and we had some very close and nerve recking maps.

Without further ado, let's see how the biggest event in competitive Valorant so far in 2022 unfolded. 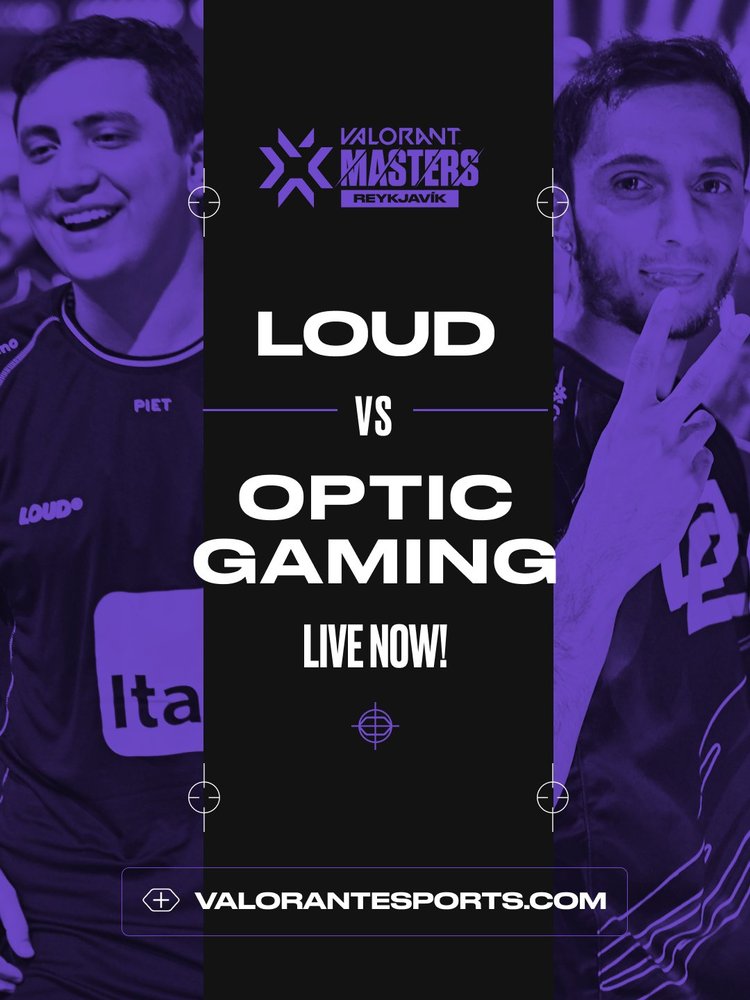 Due to coming from the upper bracket, LOUD had the advantage of banning two maps and picking the first map of the series.

Haven would be the deciding map if necessary.

Optic Gaming picked up the pistol round win, not losing any player in the first round.

The North American side was playing very aggressively on their defensive side, which is something they do a lot.

With this approach, Optic Gaming found a lot of success.

It was being hard for LOUD to get into the bombsite, and when they did Optic Gaming was playing the retakes perfectly.

Ascent was LOUD best map and won where the Brazilians were undefeated.

However after a great first half on their defensive side Optic Gaming had a comfortable 10-2 lead, and it looked like the LOUD undefeated streak on Ascent was coming to an end.

But the Brazilian side was not going to give up.

With a great round by pancada they won the pistol round.

Now the story was repeating itself but this time it was LOUD on the defensive side.

The Brazilian champions were winning rounds on the back of some spectacular retakes, that most teams would be able to pull off.

Winning five straight rounds at the start of the second half, reduced Optic Gaming lead to 10-7.

We had a close game on our hands now.

However, Optic Gaming changed their approach, and with good late executions into both the bombsites and also gaining a lot of control in mid, they were able to reach match point.

Despite LOUD comeback attempt, it was too little too late.

The huge advantage the North American squad got on the defensive side proved to be too much for LOUD to recover.

With a 13-9 scoreline, Optic Gaming secured the first map of the series.

It was a great team effort by Optic Gaming, but only one could be the map MVP and that was Marved. 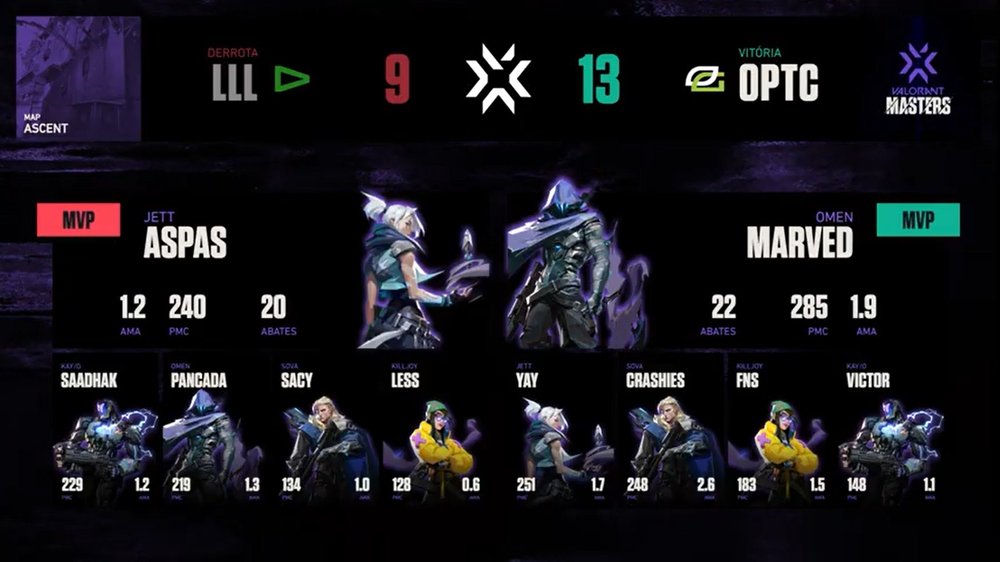 With a 285 combat score and some clutch rounds the controller player was fundamental for Optic Gaming win on Ascent.

This time it was LOUD who won the first half pistol, with a 3k and clutch by Sacy.

But Optic Gaming was quick to answer and won the following round, leaving LOUD in a bad situation when it came to their economy.

Once again Optic Gaming defensive half was something special.

The squad was playing very aggressively taking control of some areas of the map real in the game and was also having the correct read in the mid-round.

After winning five straight rounds Optic Gamign was comfortably in control of the game.

LOUD was still able to get for rounds in the first half, but with an 8-4 score and Bind being Optic Gaming best map things weren't looking great for LOUD.

The second pistol round was also secured by LOUD, with a 3k by aspas.

It was the start of the great Brazilian comeback.

LOUD went on to win the first six rounds of the half and were now in the lead 10-8.

The momentum was now entirely on the side of the Brazilian champions, and something needed to change for Optic Gaming.

And Optic Gaming did the necessary adjustments, playing a much more slow early round, taking more map control and execution into the sites later than what they were doing.

Optic Gamin managed to secure three straight rounds and was once again ahead in the scoreline.

LOUD answered back with two massive round wins and was now on match point, and one round win away from equalizing the series.

When everything looked doomed for Optic Gaming, Victor came up huge for the green wall, with an ace in the last round o regular time he forced overtime and gave Optic Gaming a new life on the second map.

On Overtime Optic Gaming carried the momentum of Victor spectacular round and came out on top 14-12.

The North American side was now one map win away from international glory.

Once again all the players from Optic Gaming played really well and was truly a team victory. 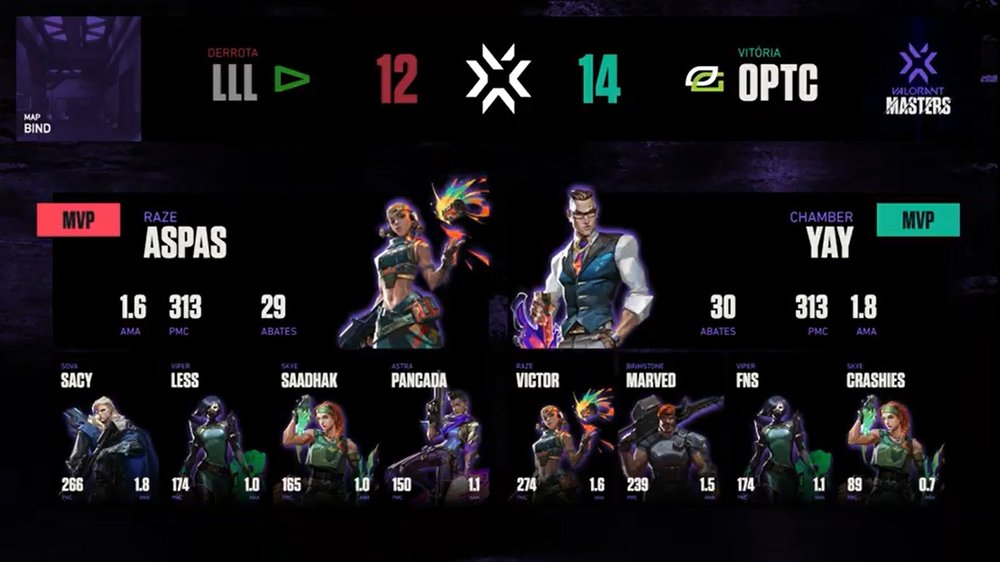 yay was the MVP of map two, has the superstar player posted a combat score of 313, and was the key for Optic Gaming to win Bind.

Optic Gaming started Breeze with a win on the pistol round.

And followed it by winning their eco and bonus round.

Loud was able to get on the board after winning an eco round.

After a good attacking side Optic Gaming took the 8-5 lead to the second half.

LOUD won a very important pistol round and was back in the game.

Optic Gaming still managed to win two straight rounds and get to 10.

But after that LOUD took control of the game.

After a timeout, the Brazilian side came alive on their attacking side and wasn't giving Optic Gaming a change.

When it looked like LOUD was going to take Breeze, Optic Gaming once again was able to force overtime.

The retake from Optic Gaming was very well executed and for the second time in the series, the map would be decided in overtime.

One overtime wasn't enough to find the winner of this third map, as pancada with a 4k forced a second overtime.

However, Optic Gaming wasn't going to be denied and closed out the map 15-13.

This time it was crashies who received the match MVP, posting a combat score of 277. 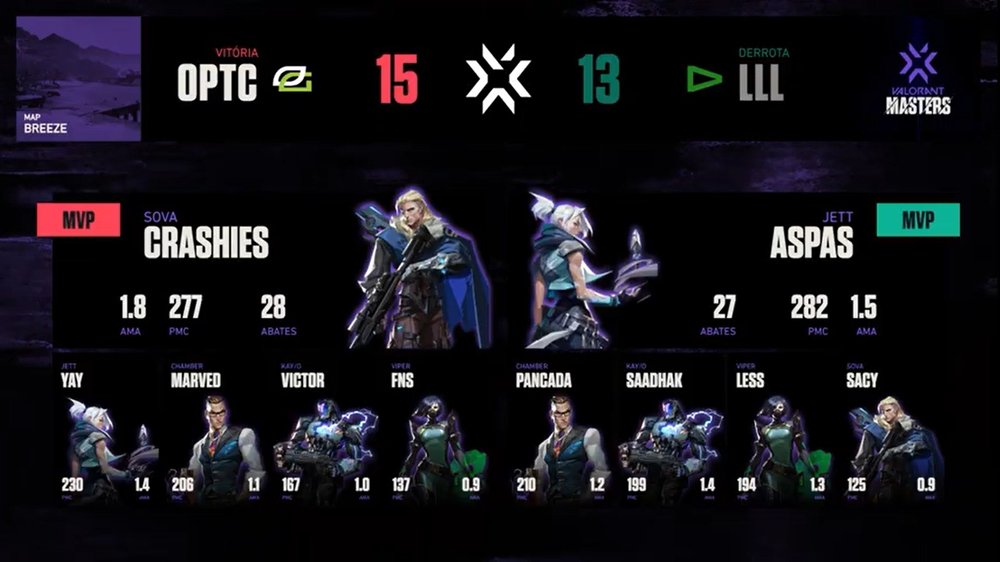 It was an impressive performance by Optic Gaming and a fully deserved win.

With this result, the North American side won the series 3-0 and take home the Masters Reykjavík 2022 trophy