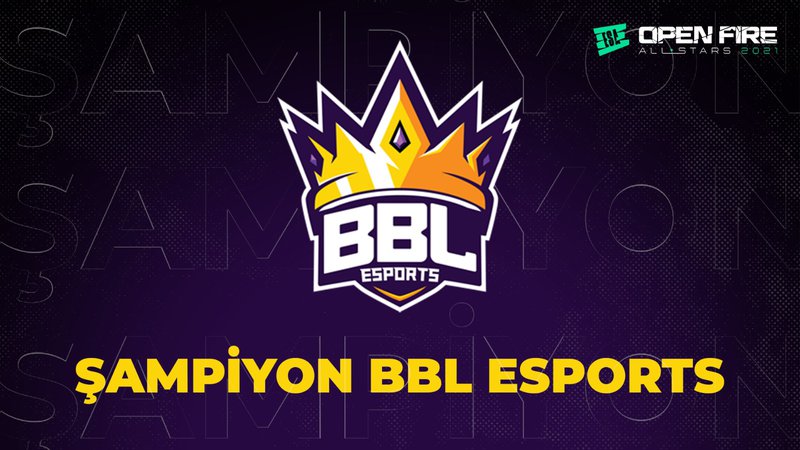 Turkish esports organization BBL Esports won yesterday the Open Fire ALL stars, cementing their place as one of the best teams in Turkey.

The tournament had an offline (Lan) and online format, with the group stage being online while the playoffs were played in Lan on the ESA Espor Arena, the tournament was composed of two groups of four teams with the three top teams from each group advancing to the playoffs.

Coming into the playoffs BBL Esports and Futbolist were seen as the favorites to take the trophy home.

The playoffs format was a single-elimination bracket with the quarter-finals being a best of three while the semifinals and onward were a best of five, with the first place from each group going directly to the semifinals.

The teams that made it into the playoffs were Kafalar Esports, BBL Esports, and Fire Flux Esports from group A and, Futbolist, Digital Athletics, Istanbul Wildcats from group B, with BBL ESPORTS and Futbolist going directly to the semifinals due to having topped their respective groups.

Now in a Lan environment, BBL Esports showed to be the better team, they defeated Fire Flux, who had eliminated Digital Athletics in the quarter-finals to make it into the semifinals, 3-1 even though most games were close BBL Esports was able to come out on top and punch their ticket to the finals.

In the finals they would face off against Kafalar Esports the team that beaten them 2-0 in the group stage, with Kafalar having upset Futbolist one of the favorites to make it into the finals 3-1 in their semifinals match up with convincing wins in the three games they won and booking another match against BBL Esports, but this time with the trophy on the Line.

Futbolist finished in the top 3 by beating Fire FLUX Esports 2-0 in their third-place match and took home the bronze and 3,016$.