Modern Warfare II has officially been released, and many players are enjoying the single-player campaign. Although once you are done with that, the real fun starts in the numerous multiplayer modes!

Modern Warfare II requires you to play multiplayer matches and complete daily challenges to increase your Military Rank level, the same as in the previous few sequels. Along with that, the Prestige System also returns.

The game was released with an account ranking system that coincides with levels of multiple tiers that can be very confusing initially. It is comparatively more difficult for new players to understand this method and they can find themselves lost.

The game has its own leveling system that rewards players with different in-game gadgets and perks as they progress through the ranks. This is also the main method to unlock most of the killstreaks, perks, and weapons, as they are locked behind these account levels.

In this article, we explain the whole system in detail, along with the different Military Ranks as well as the Prestige System. 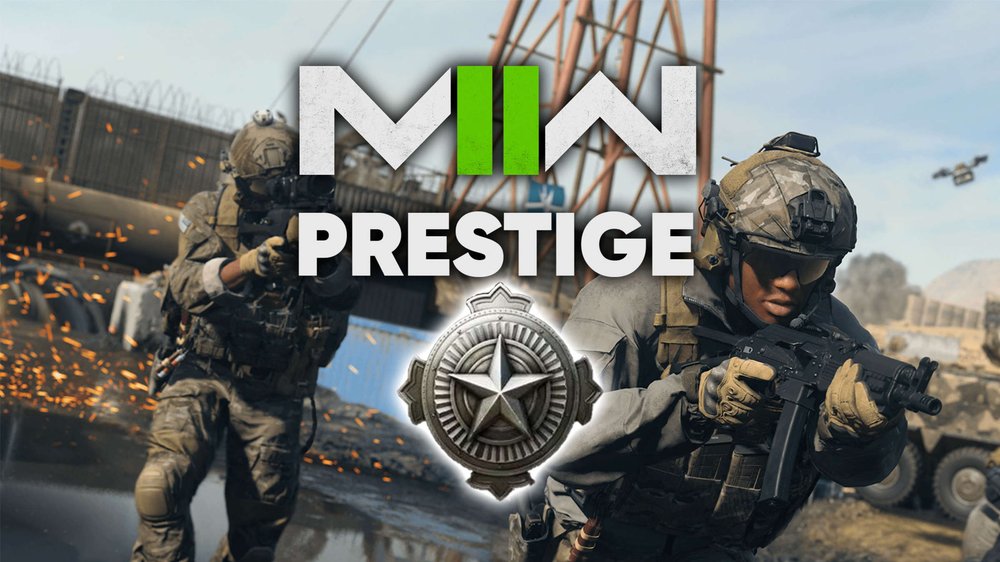 The Prestige System in Modern Warfare II works the same as it did in 2020’s Cold War or last year’s Vanguard. It will also be tied to Seasons like in those CoD iterations.

You can already run into MWII Multiplayer modes and raise your Military Rank to 55 as soon as possible. Still, the possibility of Prestige will be unlocked only at the beginning of the first season, i.e., scheduled for November 16.

There is also a lot of benefit to earning Prestige status as you will gain many bonuses such as field upgrades, new load-outs, additional weapon platforms for Gunsmith mode, perks, access to some higher level Warzone 2 weapons, and much more! 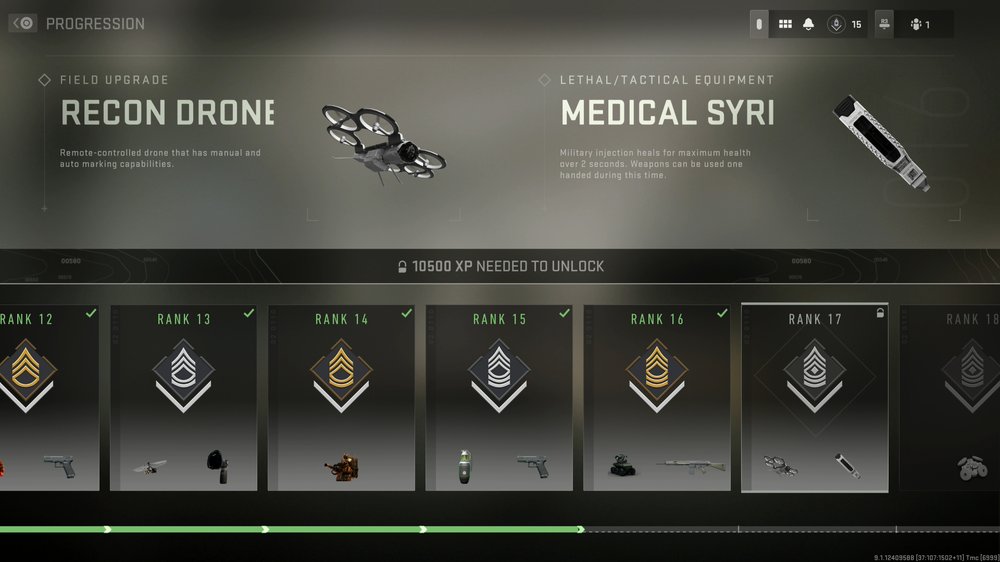 The Military Ranks refer to the first 55 levels players progress through in MWII Multiplayer. The 55th MR is the level cap, and the highest level one can achieve. Although completing all the tiers in the first week of the game's release is not the easiest feat, it is not impossible either.

With plenty of hard work and a full grind-set mentality, players can push through all the tiers and unlock the complete equipment that is locked behind the tiers. MWII also has some specific game modes that can offer a faster method to gain XP.

This helps players to rank up faster in the same amount of time instead of playing random match types.

The multiple game modes in MWII offer a lot of XP for completing the match’s objective. In addition, those who have obtained XP tokens can enable them to boost their rewards even higher and progress faster through the Military Ranks.

Kill Confirmed, Hardpoint, and Invasion are a few of the best game modes that can help players quickly level up their weapons along with their account levels. Moreover, they can also concentrate on spending time on particular challenges in selected modes and progress quickly with the Quick Play filter option.

Modern Warfare 2 Military Rank: How to get Player XP 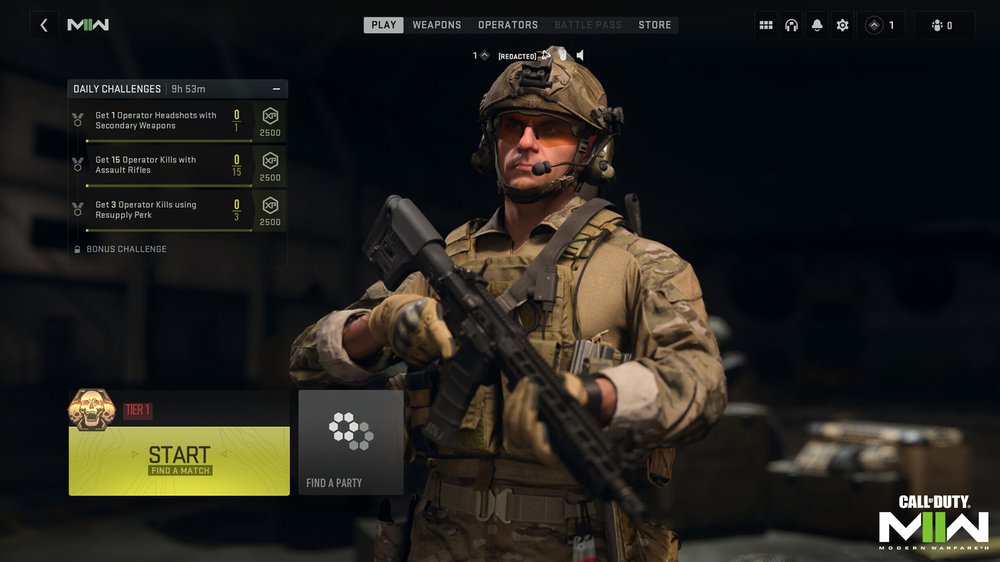 To increase your MWII Military Rank, both before and after you have obtained any Prestige Ranks, you will need player XP. You can easily obtain it by performing the classic actions across multiplayer modes, such as kills and headshots.

However, there are also a few additional tasks that you can accomplish to level up more efficiently and faster. Following are some of the ways to level up your Modern Warfare II Military Rank:

In multiplayer, there are three major categories of daily challenges. Firstly, there is a general task, such as getting a specific number of kills while winning matches or aiming down sights. Secondly, there is a weapon challenge, like getting a certain number of kills with a particular weapon, such as a Sniper Rifle or five headshots with an SMG.

Lastly, there is a special objective that requires specific Loadout equipment, such as Perks or Field Upgrades. You will gain access to a Bonus Objective once you complete all three Daily Challenges. There are two possible tasks to complete, but you only need to complete one to gain the extra XP.

As for Special Ops, there are a few changes and variations. As far as the first challenge is concerned, it is generic and can be tackled in any mission. However, the second and third challenges can either follow a similar pattern or be co-op specific.

The Bonus challenge also grants you the choice of two Mission Challenges. You will also need Special Ops Stars from the third and Bonus Challenges to progress through the Special Ops Kits.

The Career Challenges, however, work a little differently than the rest. Although you can expect similar tasks involving kills and match wins, some involve using certain weapons or more difficult tasks such as getting Longshots. Unless you're a sniper, then you're in for a rough time.

In multiplayer, some of these challenges can have multiple milestone steps, which means that you can start obtaining XP a little earlier as compared to having to fully complete a challenge (although there is additional XP waiting for you if you do so).

Career Challenges are also an excellent way to occasionally get your hands on the Calling Cards occasionally. In Special Ops, the challenges are split into Intel Collection and Career Star Unlocks. Basically, there is no shortage of activities that one can pursue.

Furthermore, you can also expect additional challenges during each season, which will become available at prestige-level milestones.

Warzone 2.0 Pre-Load Time Date And Time For All Regions
Wondering what the pre-load date and time are for all regions in Call of Duty: Warzone 2.0? Check out this article where we tell you all about it!
17/11/2022
818 Views

Call of Duty: Modern Warfare II Twitch Drops And How To Get Them
Wondering what the Twitch drops are for Modern Warfare II and how to get them? Check out this article where we discuss everything in detail!
08/11/2022
1133 Views
Comments
No comments yet
Please login to leave a comment.
Login
Streams
Live
Streams
Live
Popular