People love a game that allows them to hide from their problems and provides a platform where they can truly be themselves for a few hours, and Fortnite has brought them exactly that. They can have whatever name they like and be whatever character they want.

Moreover, they can also choose the outfits of their character, commonly known as skins. There is a wide variety of skins that one can choose to put on their character. Fortnite also collaborates with other platforms like DC, Marvel, etc., to bring even cooler skins.

Similarly, new skins are introduced for every holiday season, such as Christmas, Halloween, Easter, etc. During Christmas, the players are particularly thrilled about the skins since it brings a level of joy to them along with special events. These skins are just plain eccentric and funny.

We have brought you a list of the most creative and awesome Christmas skins that you would definitely love playing Fortnite in.

Here are the Top 10 Christmas Skins in Fortnite: 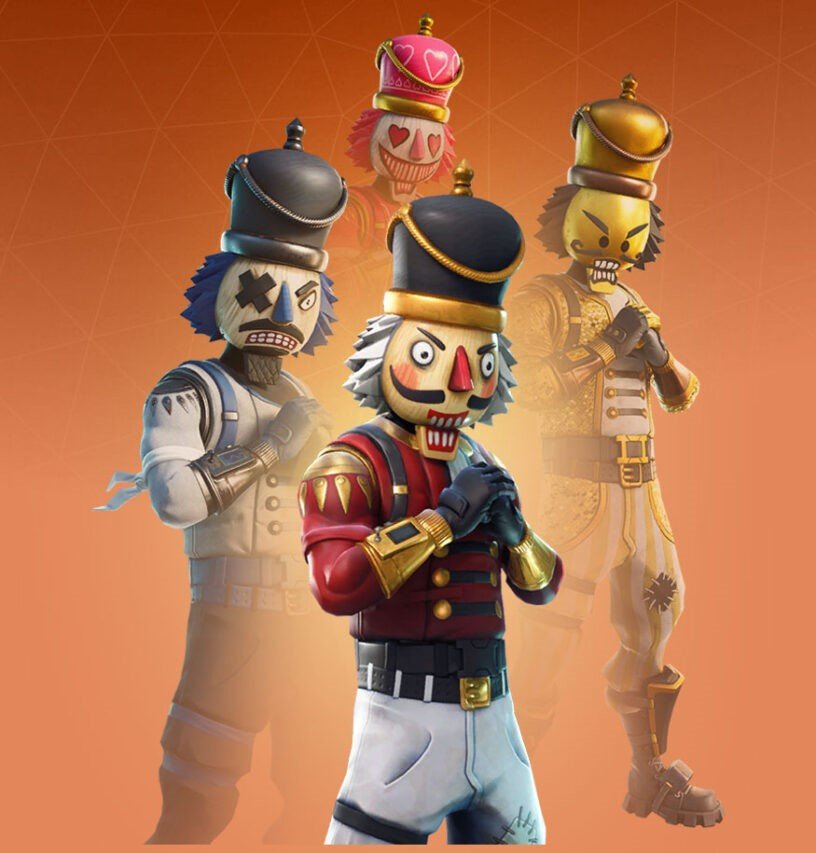 Crackshot reminds us of the legendary character Nutcracker, one of Christmas's main characters. It was first added to Fortnite in Season 1, Chapter 1, as a part of the Nutcracker Skin Set. Players could buy it from the Item Shop for 2,000 V-Bucks once it is available.

As soon as its release, Crackshot became one of the most used characters in Battle Royale. Moreover, he consists of three additional styles; pink, gold, and blue. He has a wooden head, painted-on features, and adorns the perfect attire known to Nutcrackers.

He seems like the perfect character for you to puppet around and goes into battle with to scare off the other players and hopefully get a win! 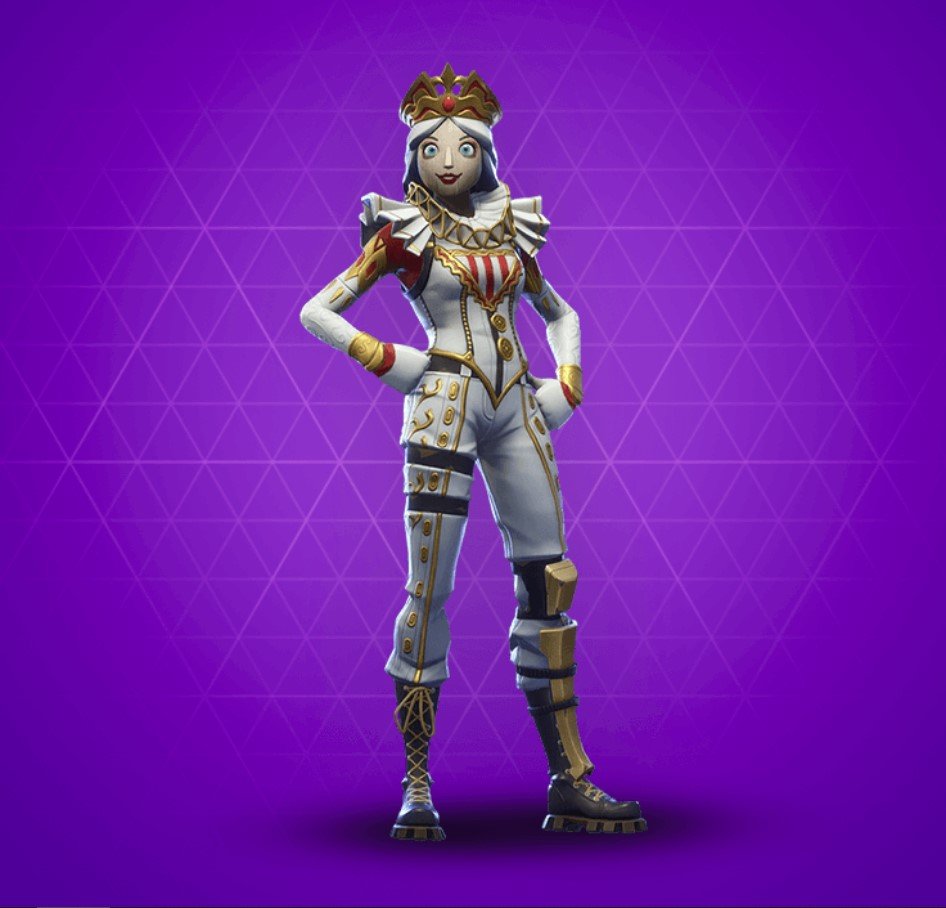 Crackabella was released for the female players out there, and she wears an entirely White Attire with Gold and Red trimmings on it. This skin spreads holiday cheer and brings joy to its enemies right before instilling fear and killing them. 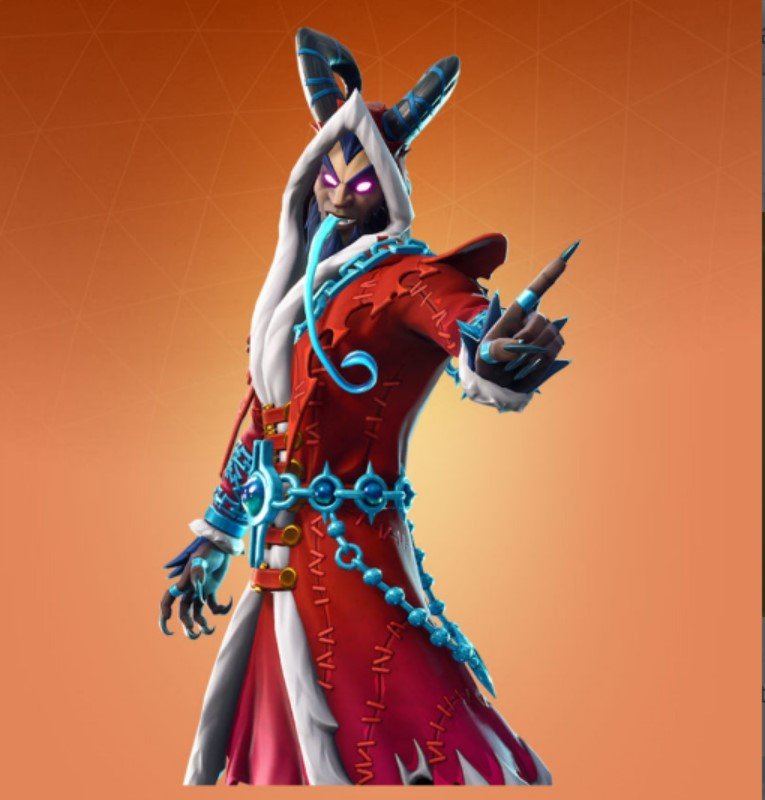 Children who have made it onto the naughty list are met by Krampus during Fortnite Christmas Events. Krampus is a mythological, horned figure described as “half-goat and half-demon” who punishes children who have misbehaved during Christmas.

He is one of the scariest skins to be introduced in Fortnite and was added in Season 7, Chapter 1. This skin is part of the Krampus Set and can be bought for 2,000 V-Bucks as soon as it is added to the Item shop.

He makes his dramatic entry by gliding through his Little Helper Glider, wearing a Santa suit to trick its prey. He has long horns protruding from his hood and claws for hands. He can easily scare the living hell out of a person just by his appearance alone.

Glimmer gives off the perfect Ice Queen vibes with the crown, the blue dress, the hairstyle, and the chilly nature. What is missing is her sister, Anna, and Olaf, no? This specific skin was released in Season 7, Chapter 1 of Fortnite.

This outfit is from the Winter Wonderland Set and can be bought from the Item Shop for 2,000 V-Bucks when listed. The addition of Glimmer made the Disney fans super happy and excited to play.

The addition of belts to its outfit gives this skin its deadly look, which can hold guns, ammunition, and knives. 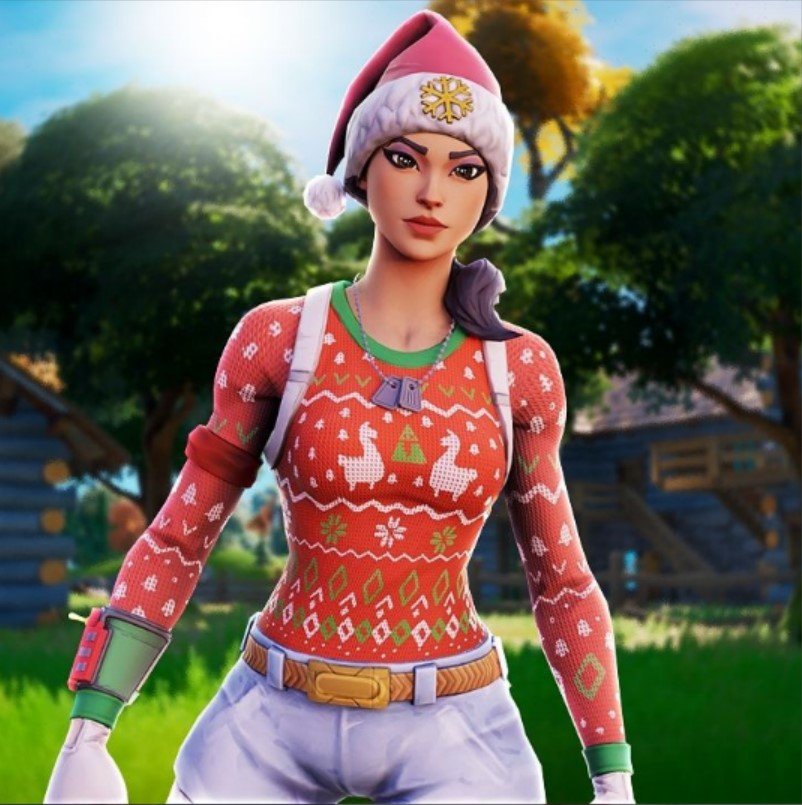 One of the most loved OG skins, Nog Ops, is an Uncommon Fortnite outfit and belongs to the Merry Christmas Set, which was released in Season 1, Chapter 1 of Fortnite. It can be bought from the Item Shop for only 800 V-Bucks once available.

This simple Christmas-themed outfit consists of a headhunter wearing a plain Santa hat and a Christmas sweater. The in-game description of Nog Ops is “Have yourself a merry little skirmish.”

This outfit looks simple and friendly, but on the right person, it can be a scary and deadly thing. It is the perfect embodiment of “Kill ‘em with kindness.” Her male counterpart goes with the name “Yuletide Ranger.” 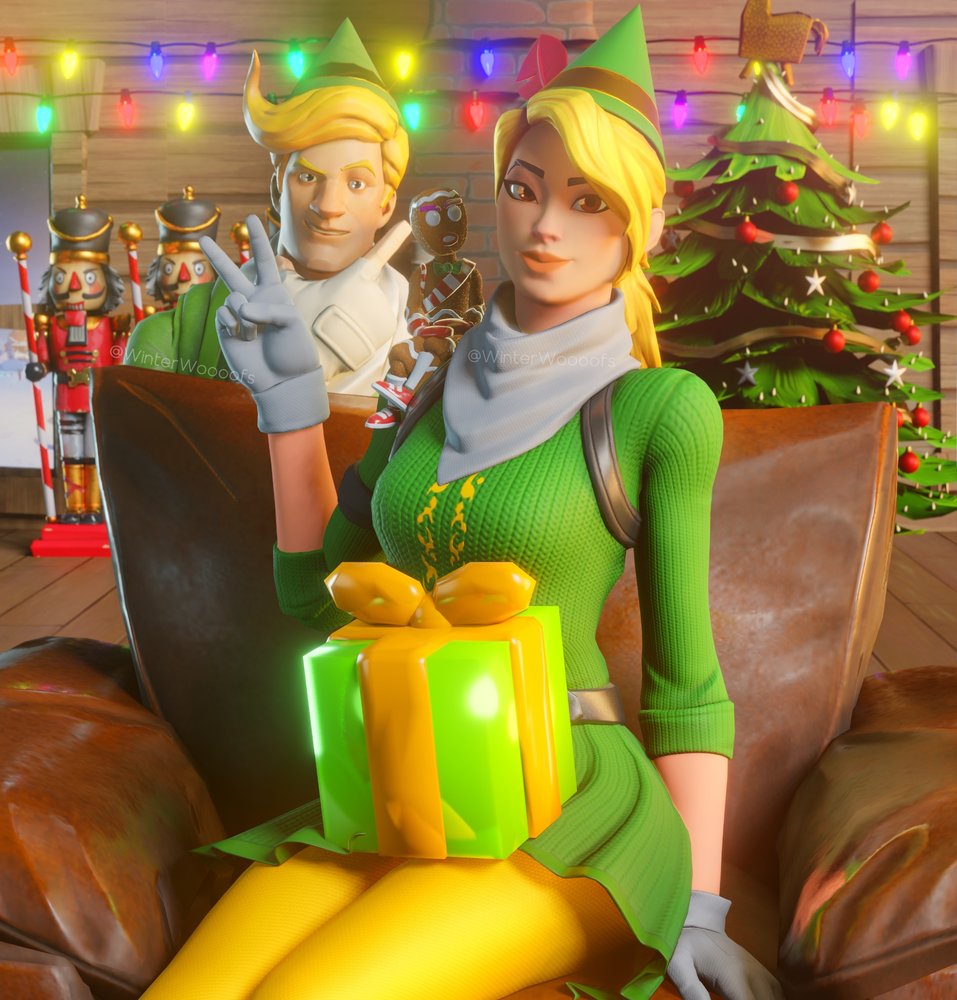 Now that we have seen villain skin, Elsa skin, and a plain Christmas skin, it is now time to introduce to the Elf skin! Codename E.L.F is a rare Fortnite skin that was first introduced in Season 2 and could have been purchased for 1,200 V-Bucks.

This outfit is part of the Polar Legends Set and has made about ten appearances up till now. It can be found in various forms of Fortnite merchandise as this skin is an absolute classic. Codename E.L.F. was last seen in January 2018 and has made no appearances since then.

The female counterpart of Codename E.L.F is known as Snowball. She is also an elf and has the same outfit as him. For all the elf-lovers, these outfits are for them, and Codename E.L.F also comes in two other appearances, i.e., default, minty, and H.E.L.P.E.R style. 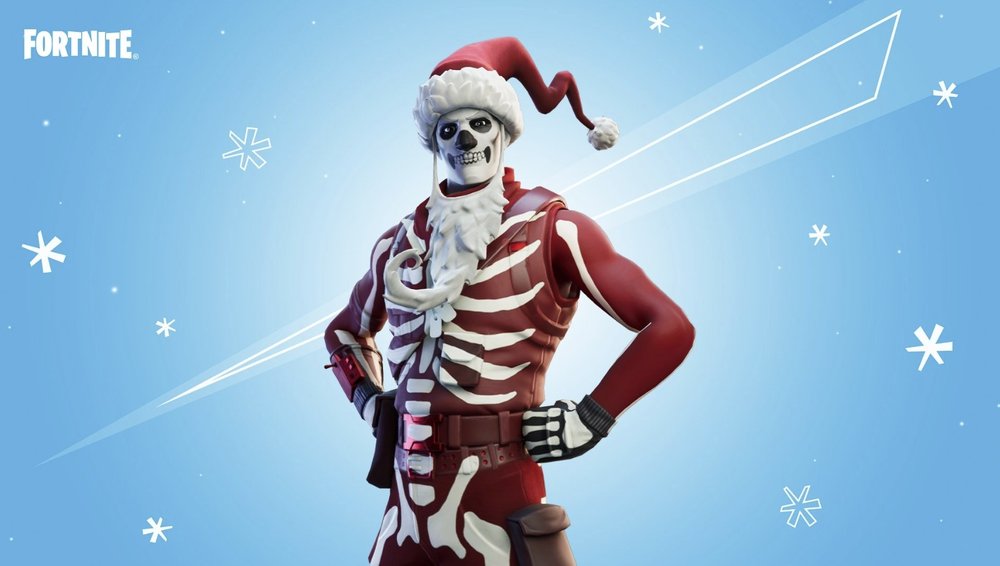 Yule Trooper is the ultimate skin with a combination of festive and spooky. It gives the Skull Trooper that we all love a new Christmas outfit, a hat, and a loosely-attached beard.

The Yule Trooper skin was first added to Fortnite in Season 1, Chapter 2 of Fortnite.

You can purchase this outfit for 1,500 V-Bucks as soon as it is added to the Item shop and is also a part of the Skull Squad Set. While playing Battle Royale with this skin on, you will feel like a one-man army of skeletons. Yule Trooper’s bones are filled with the holiday spirit, are yours? 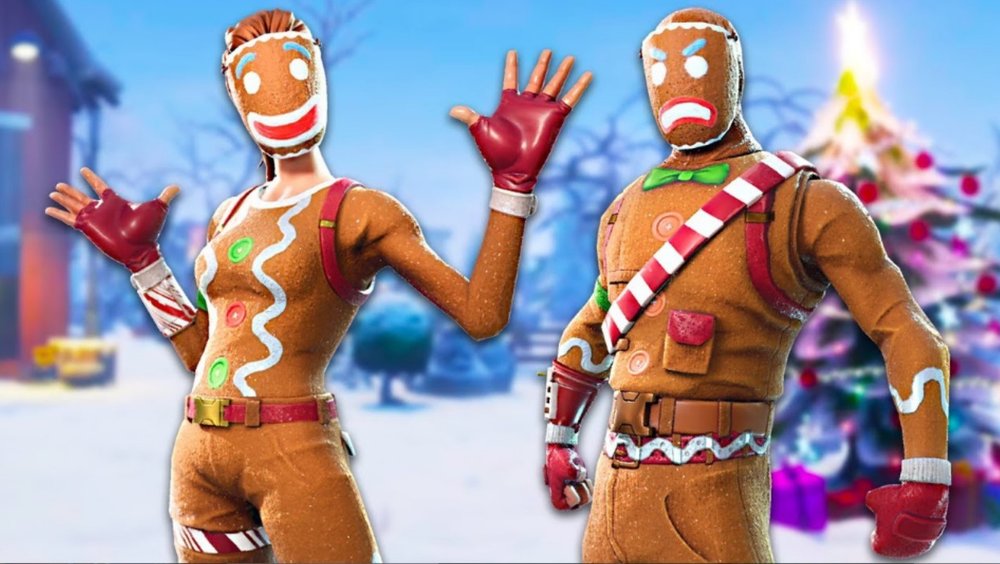 These festive skins also come in the form of the Gingerbread people! They are delicious to eat but vicious in a battle. These skins were released in Season 1 of Fortnite and are a part of the Gingerbread Set, which can be bought for 2,400 V-Bucks when listed.

The Ginger Gunner is the happier version with a smile on her face, whereas Merry Marauder is an angry fellow with a frown. 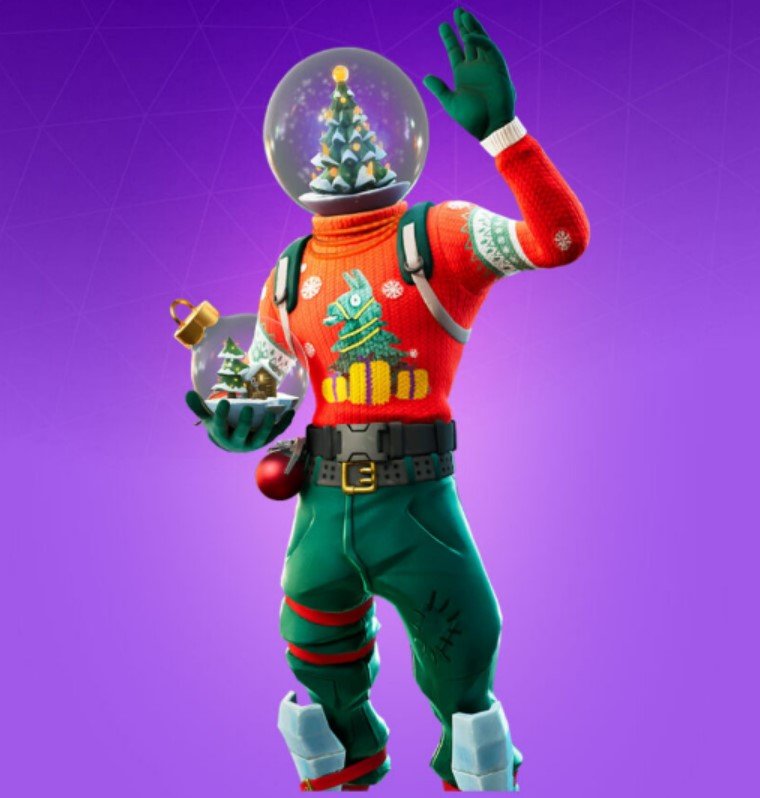 Having a globe for a head that consists of a tree in it, this special outfit was released in Season 1, Chapter 1 of Fortnite. It can be acquired for just 1,500 V-Bucks during the Christmas season and can be found in the Frosty FIghts Set.

The Globe Shaker skin was considered the Best Fortnite Christmas skin in 2021. It consists of a Christmas-themed sweater paired with green jeans with red trimmings and black belts. His belt also consists of ornamental grenades to make your explosions more festive!

Globe Shaker is perfect for spreading the holiday cheer around until you kill someone, obviously. 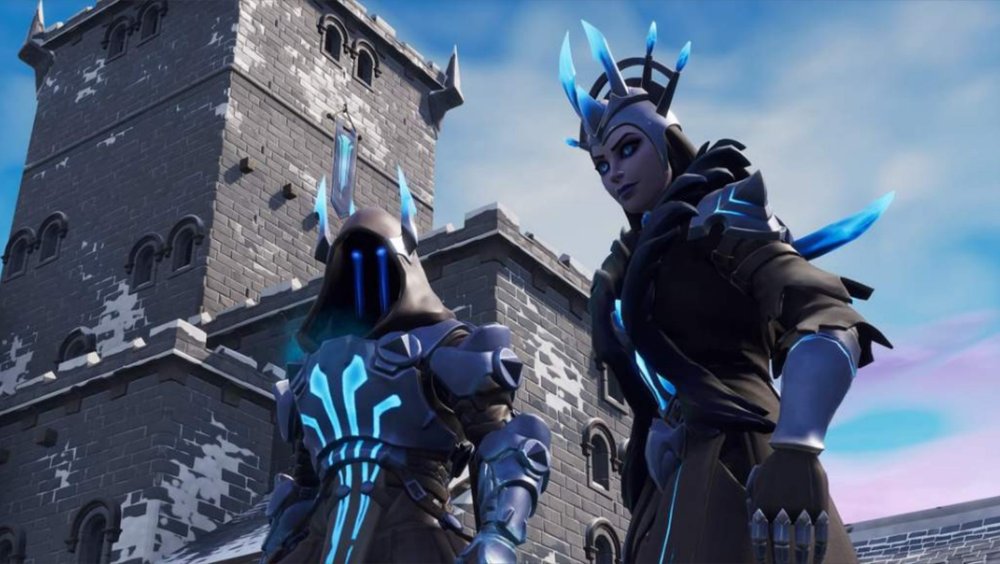 The Ice King is a legendary outfit from the Ice Kingdom set and was available via the Battle Pass during Season 7 and could be unlocked at Tier 100. It gives off a very dark and mysterious vibe where the character wears a hood that hides his face, armor, and shoes in the shape of hooves.

The Ice King has a female counterpart who goes by the name The Ice Queen. She has a very icy appearance and reminds us of the famous Disney villains. She was first released in Season 7 and can be bought for 2,000 V-Bucks when listed.

This duo is one to keep in your lockers as they are the epitome of darkness and look so cool!

The Best Fortnite Building Tips For New Players
Are you new to Fortnite and want to get better at building? Check out this article to learn the best Tips you need for improving your building skills!
21/08/2022
893 Views

The Best Fortnite Controller Settings (2022)
When it comes to playing video games like Fortnite, make sure that your controller has the finest settings for key configurations and other features, and you'll move from a novice...
13/06/2022
4487 Views

All Island codes for Dragon Ball Super episodes in Fortnite
Finally, Fortnite and Dragon Ball collab was added to the game. New items, cosmetics, and challengers bring the full power and atmosphere of the Dragon Ball universe. Players rece...
18/08/2022
1243 Views

The Best Tryhard Names To Use In Fortnite
Want to scare your opponents by using some Tryhard names in Fortnite? Check out this article, where we have compiled various names for you to use!
15/10/2022
916 Views

How The Fortnite Glitch Allows Players To Have Infinite Victory Royales
Want to take advantage of the Fortnite glitch and get as many Victory Royales as you can? Check out this article where we guide you on how to do so!
17/11/2022
652 Views
Comments
No comments yet
Please login to leave a comment.
Login
Streams
Live
Streams
Live
Popular