How To Find And Destroy Hiding Places In Fortnite (2023)

From the time Fortnite was released until now, there have been countless skins available. Some are from different events or challenges, some are a part of a holiday festival, and some are in collaboration with a TV show or movie, or franchise such as Marvel.

Then there are specifically themed skins such as robotic skins, Christmas skins, Halloween skins, and many more. And all these skins which were released in the early days of Fortnite are known as the OG Skins! This is because they are incredibly rare, and only the oldest players have these skins in their lockers. However, some of them have seen a return to the Item Shop recently.

We have compiled a list of the Top OG Skins ever released in Fortnite, and we hope you can cross some of them off your list as soon as you own them. These skins can be bought from the Item Shop, but they rarely show up, so you will have to wait for them to be listed before purchasing them.

Following is a list of the Top 10 OG Skins in Fortnite: 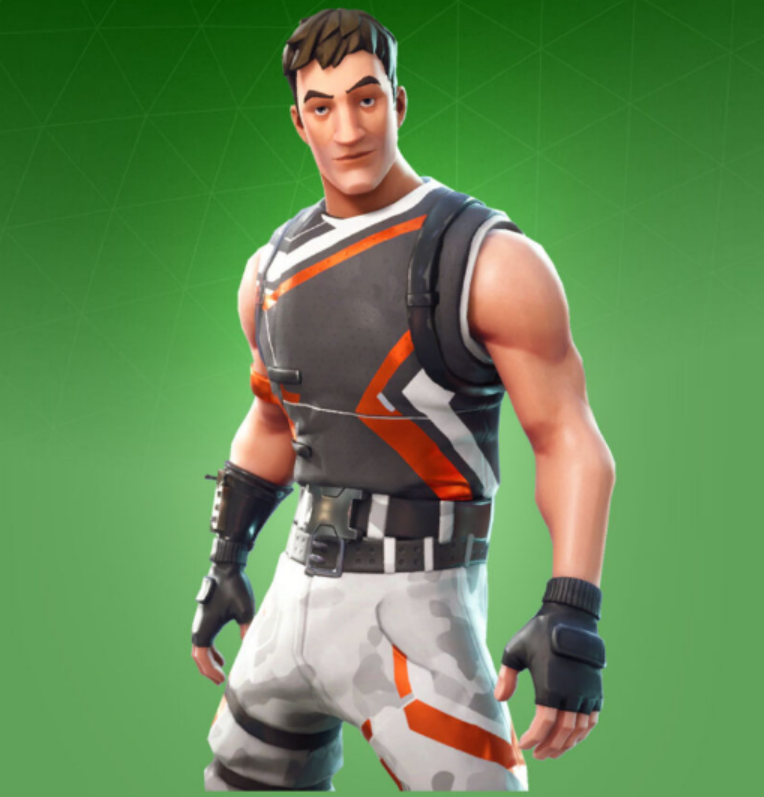 The Devastator Skin is a Rare Fortnite Skin that belongs to the Storm Fusion Set. It was introduced to us in Season 1, Chapter 1 of Fortnite and can be bought for 800 V-Bucks from the Item shop once it is listed.

The character is equipped with combatant clothing that helps gamers to destroy and annihilate their enemies. The character wears a tank top and faded camouflage pants which are dark grey and off-white in color.

His hands are covered by gym gloves, giving him the perfect tough-guy look that any ripped guy would have! 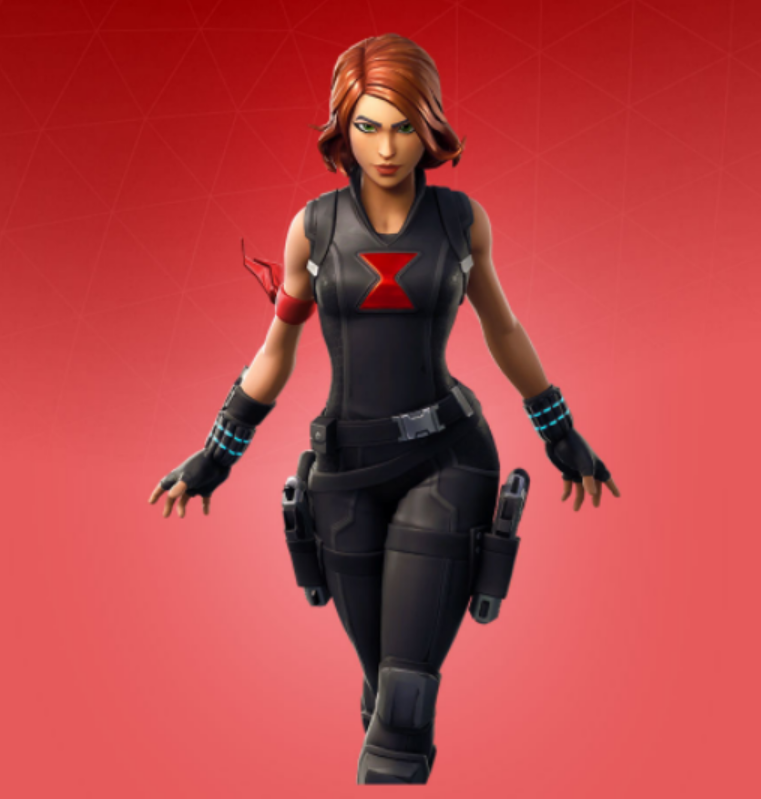 Black Widow Skin was the first of the Marvel characters to be released in Fortnite in Season 8, Chapter 1. It was a part of the Avengers Set and can be bought for 1,500 V-Bucks once it is listed, as it is a rare item.

Once coupled with the Widow’s Pirouette, the Black Widow Skin is definitely cool and savage at the same time! This skin comes as a blonde-headed or a red-headed Black Widow, so you can go for whichever one you prefer.

This special skin is definitely one to have in the lockers, as it is completely sassy and scary at the same time. Black Widow is also one of the dopest Avengers of all time, so it's a given that other players would be jealous of this skin. 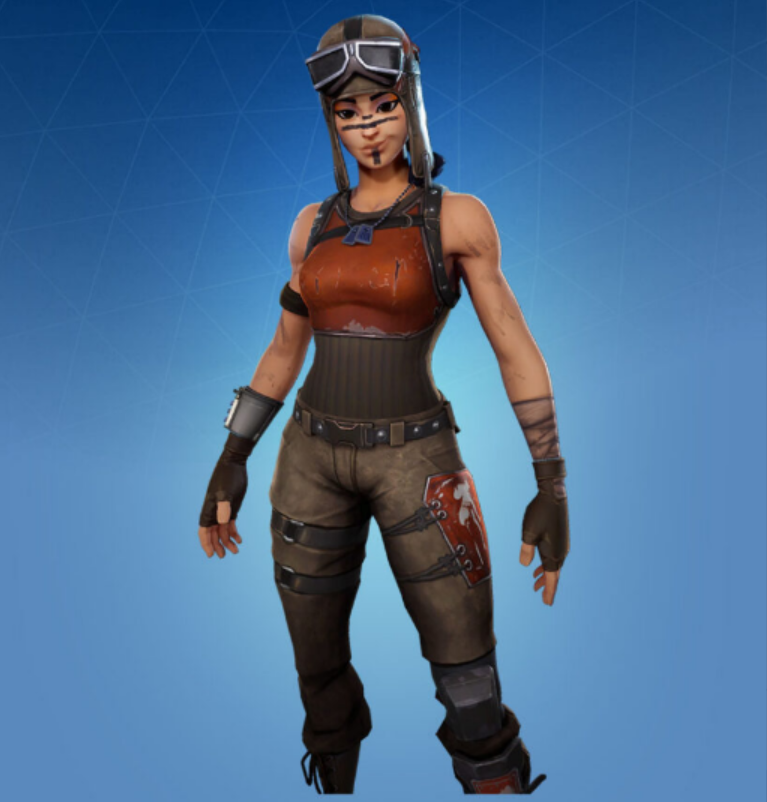 Although this skin might not seem like much to you, but it is one of the most beloved skins to some old-time players. One could only acquire this skin if they played during Fortnite Season 1, and they needed to upgrade to level 20 to get a chance to purchase it.

The Renegade Raider skin was released in Season 1, Chapter 1 of Fortnite and can be bought from the item shop for 1,200 V-Bucks if added to the Item Shop. Moreover, when playing with this skin, the others will know that you are one of the oldest players.

Her clothing gives off a post-apocalyptic vibe with those goggles on her head and a bit of a personal style. This skin also comes with three other variations! 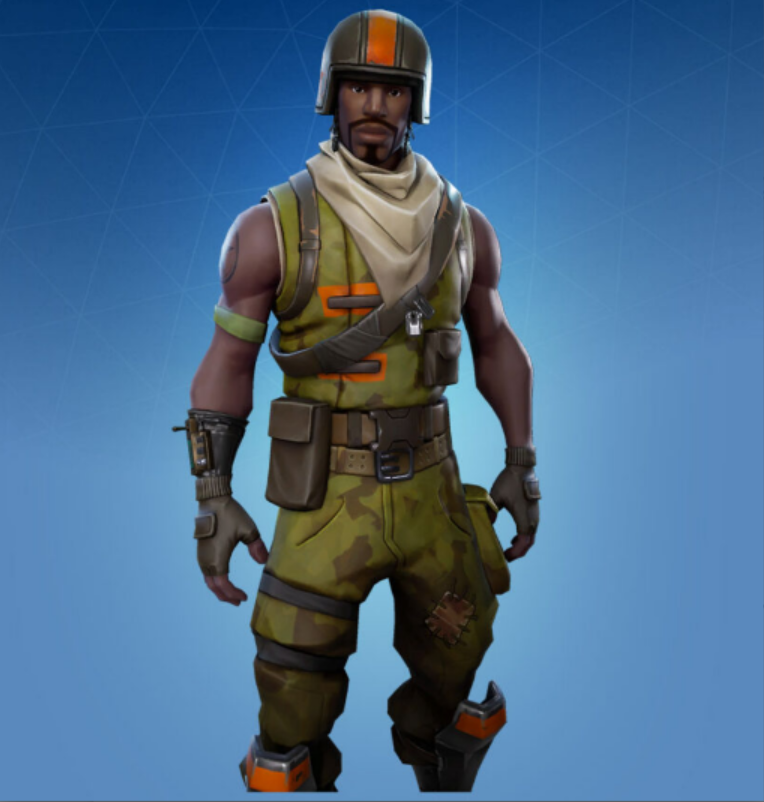 The Aerial Assault Trooper is an extremely Rare Fortnite Outfit that was released in Season 1, Chapter 1, and could have been bought for 1,200 V-Bucks. This was the first skin that you could earn in Fortnite, and you had to reach level 15 before you could buy it.

It consists of a get-up of an airspace commander from the clothes to even the helmet. The US Airforce inspires this outfit as it is equipped with camouflage pants, a green tank top, and gloves on his hands. There is a white scarf tied around his neck.

The players who bought this outfit when it came out are pretty fortunate since it is one of the most OG Skins. These players can fly in wearing this skin and perform an aerial strike on their opponents, so no one remains alive! 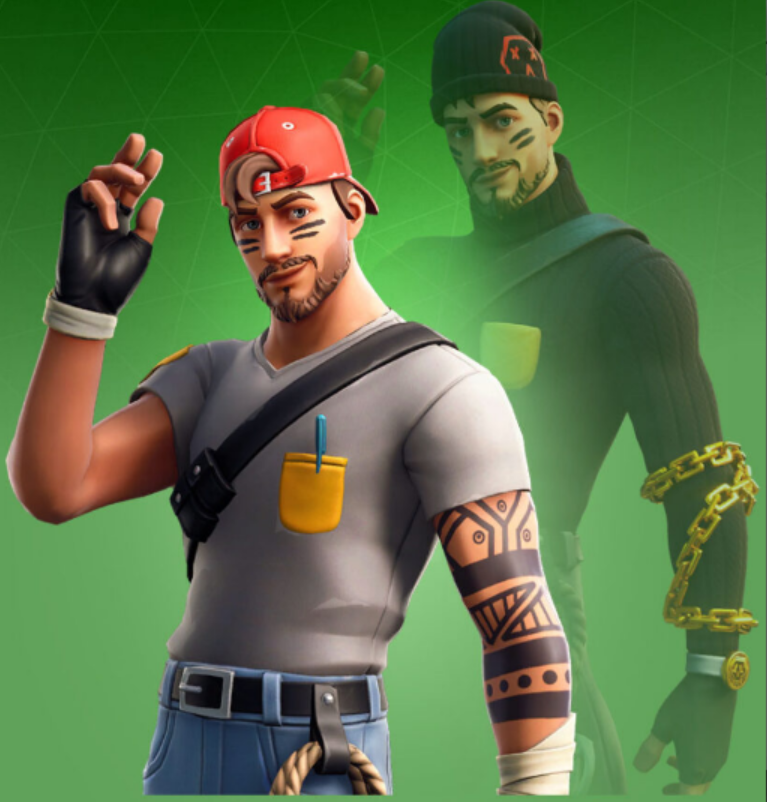 The Guild Skin is considered an OG Skin in Fortnite because it is an Uncommon Fortnite Outfit that was released in Season 8, Chapter 1 of Fortnite. It can be simply purchased from the Item Shop for 800 V-Bucks once it becomes available.

This skin also recently received an upgrade in the form of a new style! Guild is an architect, so he was very popular among the male gamers working in construction. He is wearing a uniform that is usually seen on people working at construction sites.

The uniform consists of a grey T-shirt and blue jeans, with a rope attached. His left has a bandage as well as a tattoo on it, while the right one has a glove. You can nail someone with this outfit or throw a hammer on their head while equipped with this outfit! 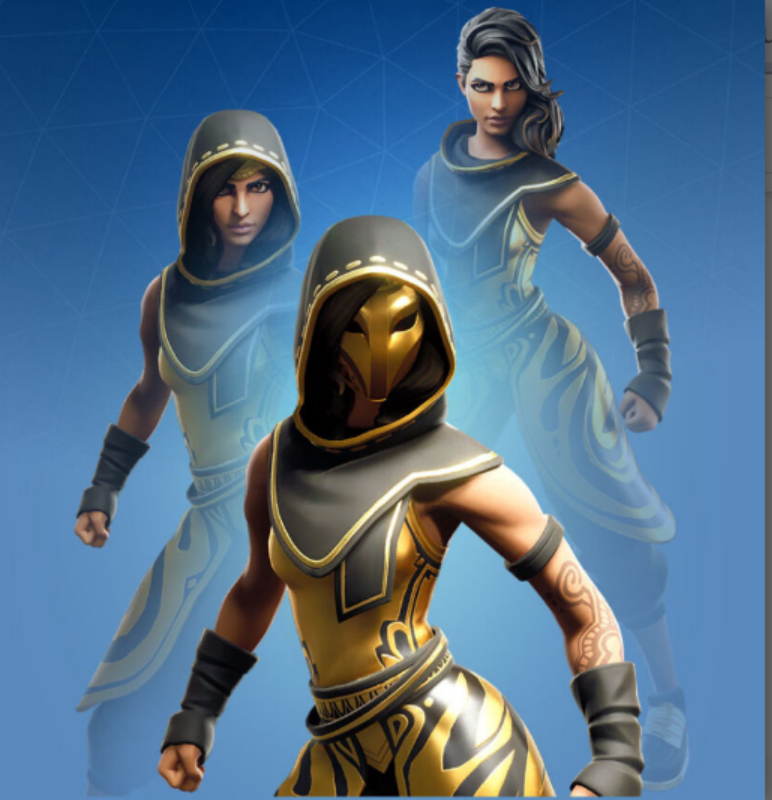 The Sandstorm skin is an incredible outfit that reminds us of Princess Jasmine if she ever turns evil. This Ancient Egyptian Warrior belongs to the Immortal Sands Set and is pretty rare. It can be availed from the Item shop for 1,200 V-Bucks when listed.

This skin was first released in Season 9, Chapter 1 of Fortnite, and is pretty popular among the players. This warrior is covered in golden armor, complemented with blackened stone, giving her a regal yet terrifying look.

It would be pretty thrilling to walk into battle equipped with this elegant and stylish skin! Even if you die early in battle, you will be satisfied to know that you are going out with style, at least! 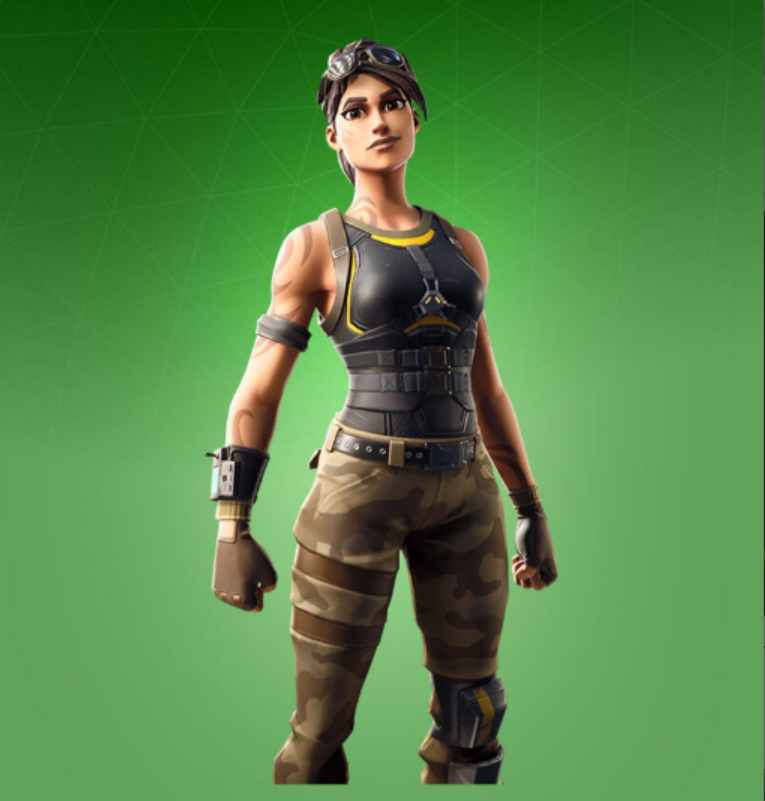 The Desert Dominator Skin is ranked amongst the rarest skins in Fortnite, thus making it an OG Skin. Released in Season 9, Chapter 1, this skin can be purchased from the Item Shop for 800 V-Bucks. Keep that money ready, so you can buy this cool skin as soon as it is listed!

This skin has been giving us Lara Croft vibes ever since we set our eyes on it. The resemblance is absolutely uncanny! It consists of a warrior set in the mid-east, wearing combatant clothing with armor as the tank top.

This outfit is the toughest and strongest one out there and is famous among female players. So, somersault into battle with this fierce skin and break a leg or two! 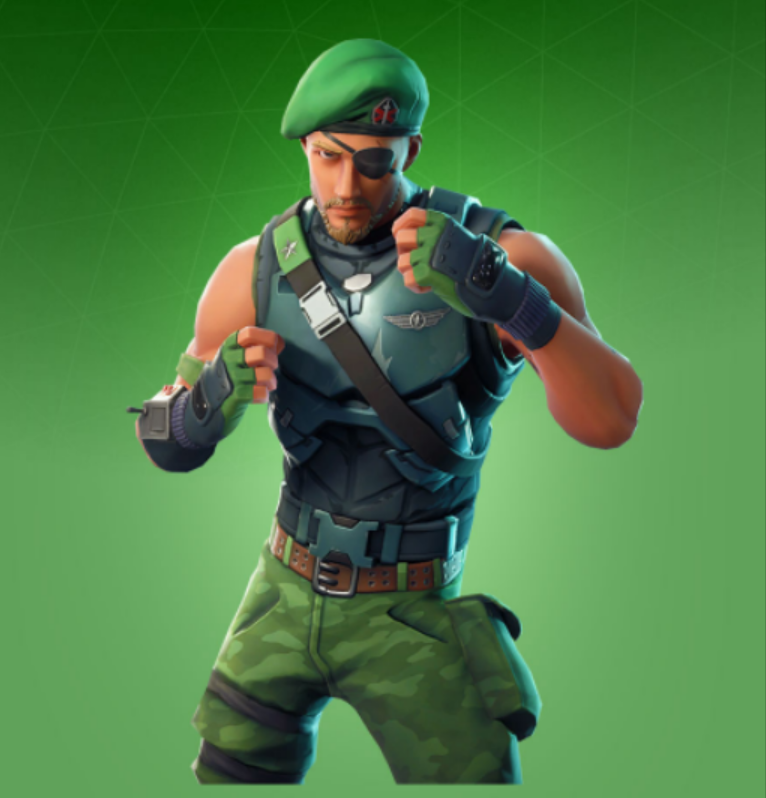 Wearing an eye patch, this guy sneaked up into our lives during Season 5, Chapter 1 of Fortnite. Though it is an Uncommon Fortnite Outfit, you can buy it from the Item Shop for 800 V-Bucks once it is listed.

This guy is wearing camouflaged clothing so it can easily blend into the forest environment and can sneak up on opponents while employing his martial arts. Garrison’s character has been trained in guerrilla warfare.

He has a fierce and sharp look, but he also gives us a feeling that he is a man of rules and principles. Don’t worry, though, because these principles won’t prevent him from destroying his enemies! 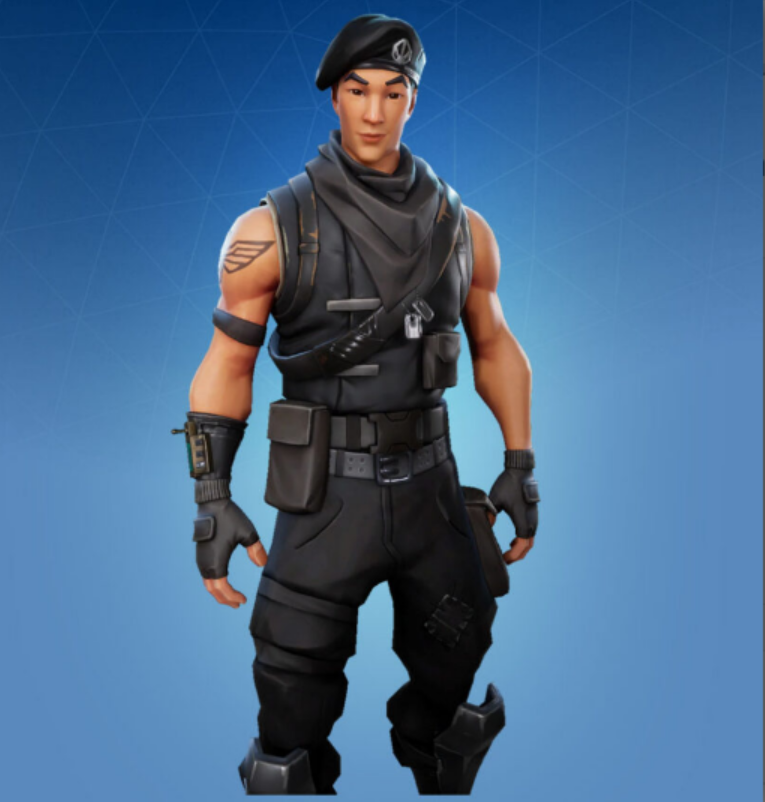 The Special Forces Skin is a Rare Fortnite outfit that was released in Season 1, Chapter 1, and can be purchased for 1,200 V-Bucks once it is listed. It is one of the earliest skins that were released on Fortnite!

This skin had a couple of unique features, such as the scarf around his neck and his hat. He gives off serious commando vibes with the hardcore armor and the pants, which are all black in color. What is really interesting is how he looks both friendly and deadly simultaneously!

His belt around his chest, his purses, and the tattoo on his right bicep all contribute to his tough appearance. Looking at him, we have no doubt that he is capable of crushing his opponents like they are nothing but ants. 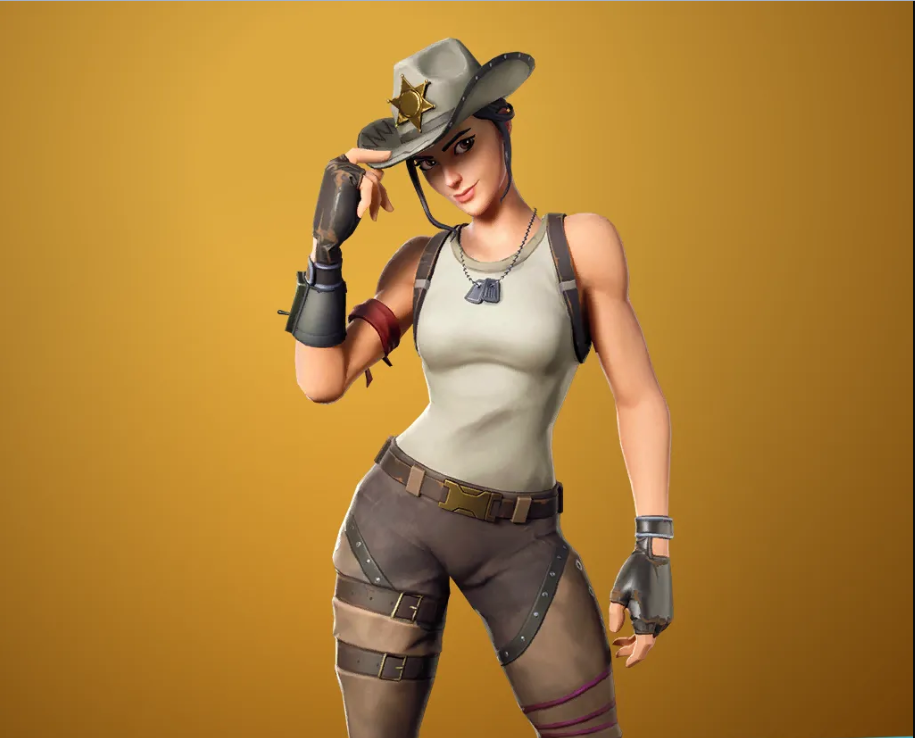 The Rio Grande skin is a Rare Fortnite Outfit that belongs to the Western Wilds Set and was released in Season 10, Chapter 1. It can be bought for 1,200 V-Bucks from the Item shop once it is available.

Rio Grande is a female sheriff looking out for the people of the West as well as shooting opponents in the head. She is famous for defeating outlaws and eliminating any threats that might be there.

She wears a flexible yet dope outfit so that she can reach her opponents faster and destroy them while doing it all with style. Rarity and lack of availability of the Rio Grande skin in the shop have caused it to be classified as a Rare and an OG Skin of Fortnite.

All Island codes for Dragon Ball Super episodes in Fortnite
Finally, Fortnite and Dragon Ball collab was added to the game. New items, cosmetics, and challengers bring the full power and atmosphere of the Dragon Ball universe. Players rece...
18/08/2022

How to get free V-Bucks in Fortnite (2023)
Who doesn’t like free stuff? We all love to get a piece of the pie, from free games to free in-game items. Fortnite is well known for offering a lot of attractive cosmetic items. ...
26/07/2022

How To Gain Up To 700,000 XP Using A Glitch In Fortnite
Want to make use of the latest Fortnite glitch and level up the game’s Battle Pass? Check out this article where we guide you on how to use this glitch!
15/11/2022

Where To Find All NPC Characters In Fortnite Chapter 3 Season 3
So to help you find these characters, we will tell you all the Fortnite NPC locations. You can interact with these NPCs to gain slight advantages. So, let’s jump right into it.
15/06/2022
Comments
No comments yet
Please login to leave a comment.
Login
Streams
Live
Streams
Live
Popular

How To Find And Destroy Hiding Places In Fortnite (2023)