5 In-game Calls to Help You Rank Up

Ranked can really be a grind. Sometimes it really does feel somewhat random and hopeless. Often we find that teams regularly lack direction and this can be somewhat blamed on the lack of proper roles. Sometimes there’s no smokes, sometimes no sentinel, and most of the time probably no IGL.

I’m here to give you some easy calls you can make to provide some structure for you and your teams. These will help apply some of the fundamentals used at the top level to your game, bring your team together, and ultimately help you win more.

This is hugely important because players regularly get greedy looking for the eco-frags. When attacking, something as simple as “let’s go A as 5” can be so important. Being able to trade against eco’s is key to success. If they isolated your players they can upgrade their guns and start to claw their way back in. This can’t be allowed to happen. When defending it can be as simple as not pushing or peeking mid. Play safe with your weapons and know you have the advantage, particularly on long site lines.

Converting your anti-eco rounds is so important. Not only is it important for keeping their economy in check, but it’s also insanely tilting to lose to pistols. Keeping your momentum flowing by winning these rounds will go a long way.

This is one for the attack. Whether you’re solo-stacking or queuing as 5, teams commonly get stuck when attacking. In ranked, it’s generally the more difficult half as it often requires more coordination to help gain an advantage. It’s not uncommon to find ranked teams get stuck in a rut when attacking and will quickly settle into their own meta in this half. I’ve seen teams who almost always rush and some that hold painfully slow defaults.

Changing the pace is key to disrupting the defender’s patterns. Often if you’re repetitive, the opponents will be too. If they’ve found a way to deal with your regular tactics then suggest a change of pace. If you’ve been slow try a rush and vice versa. It can make all the difference to finding a few extra rounds on the attack.

While you don’t really set the pace on defence this doesn’t mean you can’t change things up. Instead of tempo, look at positioning. Think about swapping sites every now and again or take areas of the map that you haven’t challenged before

This is arguably the most simple call but will make a huge, huge difference. Peeking together is such an effective way to press your advantages. How many 1 vs 3 clutches have you seen because your team just blindly attack 1 by 1 isolating themselves? This is so common because there’s very little trust in ranked and every player only wants to rely on their own skill.

A simple countdown from 3 changes ALL this. it’s so hard to kill 2 people shooting at you so swinging together is far and away the best way to guarantee a kill. I can’t possibly stress how much of a difference this will make in your ranked games. Even if just you and your duo peek together, the difference will be noticeable.

Isolate your enemies on low-buy rounds

This is kind of the opposite of the first point. When you’re at a disadvantage it’s important to do something to even the odds. The best way to do this is to find opponents who will play without support and take their guns. Do they have a sentinel who solo holds B? Is their Jett always trying to walk down mid? Wherever this weakness is you should call to pressure it as a group, try to get a kill and steal their gun. Getting one gun from the opponents on an eco massively boosts your chances of winning the round so it’s certainly always worth thinking about.

The same is true on defence. In general, lean into more high-risk high reward plays when you just have a pistol. You have nothing to lose and a lot to gain. All stack one site or push to control a main. Make something happen to give your team a foothold into the round or the round is most likely lost anyway.

Playing for retake is something we see the top teams do a lot, but very rarely happens in ranked. To be honest, it is a little try-hard and maybe you’ll get flamed by the opponents, but hey it’ll be you taking their elo at the end of the day.

This call will be at its most effective when the enemy likes to rush quick. The problem comes when the players on that site try to fight 2v5 and both die. If they play safe angles knowing it’s ok to give up the site, a 5v5 retake with the utility advantage is a lot better than a messy 3v5 retake. If your sentinel player has retake setups for the site then it’s even better. Definitely don’t be afraid to give this one a try if you’re getting run over.

Hopefully, this has given you some insight into how these simple calls can really boost your win rate. Of course, there is a massive disclaimer. This is that your teammates might not have mics or might just not listen, we’ve all been there. However, without a doubt, it’s worth a go and a little bit of coordination will go a long way on the road to radiant.

How to Save a Replay in VALORANT
The review of your personal games is one of the effective way to improve yourself in any game. This way you can find your mistakes that have been made, because they are very diffi...
28/05/2022
1747 Views

Collection Of All Operator Skins and Variants in Valorant (2022)
There are a lot of great Operator Skins in Valorant, some styles appeal more than others but you have plenty to choose from. If you are looking for an Operator skin but don't know...
18/05/2022
1787 Views 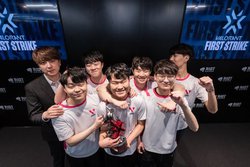 6 Man Rosters
I explore the ideas of a 6 person roster. Showing examples of success and failure as well as theories behind the pros and cons of this rosters strategy.
15/09/2021
1987 Views

VALORANT: How Do the Pros Play Skye?
Take a look at how pros and top players play everyone's favourite Ozzy. In this guide, we talk through pick rates, the abilities and how to use them and more!
16/12/2021
1348 Views
Comments
No comments yet
Please login to leave a comment.
Login
Matches
Live