How Gambit Qualified for Berlin

Being down 1-0 in a best of 3 is pretty daunting, especially when you’ve just lost your own map pick. This is the situation Gambit were in. Not only that, it was the biggest game of their lives to date, to qualify for Masters 3 in Berlin. After just losing a close game to Team Liquid on Split, something had to change for the next map to go their way. For me, map 2 of this series on Bind was the most crucial to their journey. Coming off a defeat 3 days before to Acend to knock them into the lower bracket. Now with their backs to the wall, they have to play a very strong opponent on their map pick for their tournament lives.

However, we know how this ended. Gambit are in Berlin after winning game 2 on Bind and a close decider map 3 on Icebox. I’m going to break down how Gambit managed to put in such a dominant showing in game 2 to claw themselves back from a dark defeat.

First things first let’s look at how the two composition’s stack up. We saw Liquid come out with the incredibly aggressive double duelist comp: Raze, Jett, Brimstone, Sage, Cypher. This is an in your face, bull in a china shop style composition designed to charge at you and take your site before you get a chance to even set up how you’d like. This is a perfectly legitimate way to play and Brimstone based tempo compositions are becoming more and more normal in EU. On the side of Gambit, we see a slower, more utility-focused comp that fits their playstyle really nicely and that’s: Jett, Sky, Astra, Sova, Viper. 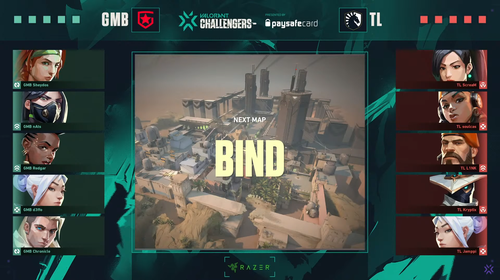 Whilst I believe almost any composition is viable and this isn’t a set rule but theoretically, a utility-focused composition should come out on top over an aggressive tempo comp. This is because you can easily afford to let them burn utility to take space, then inefficiently trade utility to take the space back. For example, the attacking Raze might boom bot hookah to take control of it. Now defenders can easily back away and then retake the space with a Skye flash and an Astra stun or something similar. While the trade isn’t perfect, you know you have much more utility to work with so you can use it more liberally.

Now let’s get into the game itself. Gambit started on the defender side and managed to put up a fantastic performance wracking up 9 rounds to Liquids 3. So let’s get into why. 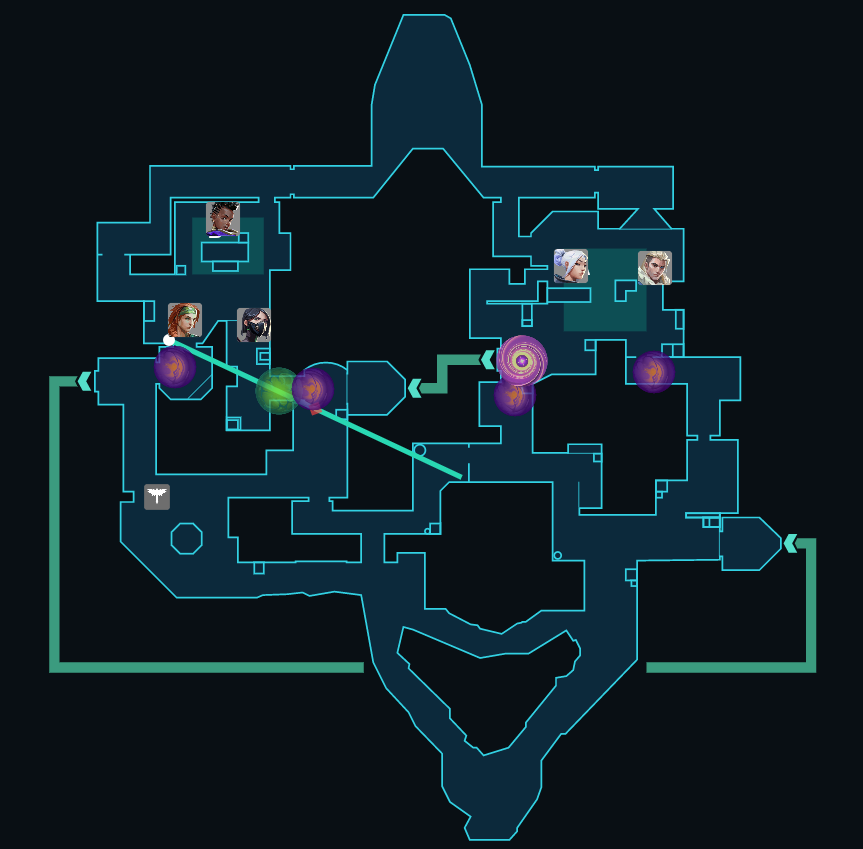 This is their most standard default as part of their game plan. We often see early info being taken with a Skye flash, Viper controlling hookah with the Jett and Sova playing together as a pair with the majority of the Astra kit available to help them. This default is designed to stave off the aggression they expected Liquid to bring. Going hookah is a near impossibility as pushing through the narrow hallway into a 50/50 angle whilst being decayed, is so hard to pull off and requires a big investment of utility. Going A short is also tough as you have to deal with one-way smokes and gravity well as well as potentially a Jett OP. That leaves the two extremities of B long and showers. While there might not be any utility to directly stop you they are guarded by Skye on Sova respectively, both of which can get full information to trigger the appropriate rotates. Astra acts as the main rotator between sites. This is not the only set-up they used, but the basic idea they varied around particularly in key rounds.

We also see a clear understanding of the strengths of their comps. Repeatedly, they would sense Liquid getting ready to exec and would simply back off the site. They let the attackers burn themselves out pushing onto site and manage to save a wealth of utility to make the retake easier. Also, they manage to achieve a consistent stream of information which is key to slowing down a tempo comp. Running both Skye and Sova, they can alternate their kit to almost always know where the opponents either are or aren’t. On this half Sheydos repeatedly used the Skye ult with around 50 seconds left instead of saving it for the retake so that clearly value this consistent information.

A key part of their success was Nats on the Viper. He would consistently use his kit selfishly. Often this is seen as a bad thing as attackers could potentially get a read but Gambit used this to their advantage instead. With Nats consistently playing around his utility they realised that Liquid was trying to avoid it so could sure up their efforts elsewhere and even when being avoided, he ended up at the top of the server. Nats is easily one of the top sentinel players in the world and Gambit knew exactly how to use him. He was often left alone when the others were in pairs so they clearly trust him to perform.

To summarise this game, I would say Gambit came out on top for a few key reasons. Firstly, they played a solid meta comp and understood how to play it. They knew that they had the flexibility to counter how Liquid wanted to play and pulled it off seamlessly. Secondly, they had well-established set-ups that were clearly well practised. Gambit came into the game with multiple arrangements ready to counter all the different situations, they knew they could adjust based on the reads they got from round to round. Finally, they understood the basic fundaments. They knew that when playing from a disadvantage they had to make something happen and would send a flank and when they were up, they consolidated their position and always played in pairs and were able to trade effectively.

Gambit went on to win challengers for EMEA due to this good core understanding of the game. Hopefully, they can continue their run of good form and make some magic happen in Berlin.

The Ultimate Compilation of all Valorant Skins Bundles
In this article, we will do a rundown of all the skin bundles in Valorant, their price, and everything else you need to know about them.
09/12/2021
6221 Views

How to Save a Replay in VALORANT
The review of your personal games is one of the effective way to improve yourself in any game. This way you can find your mistakes that have been made, because they are very diffi...
28/05/2022
1746 Views

The Best Viper Walls and Smokes on Ascent
Viper is one of the best controllers in the game, and despite not being the most picked controller on Ascent, you can still find a lot of value with her on the map. In this articl...
23/03/2022
4109 Views
Comments
No comments yet
Please login to leave a comment.
Login
Matches
Live