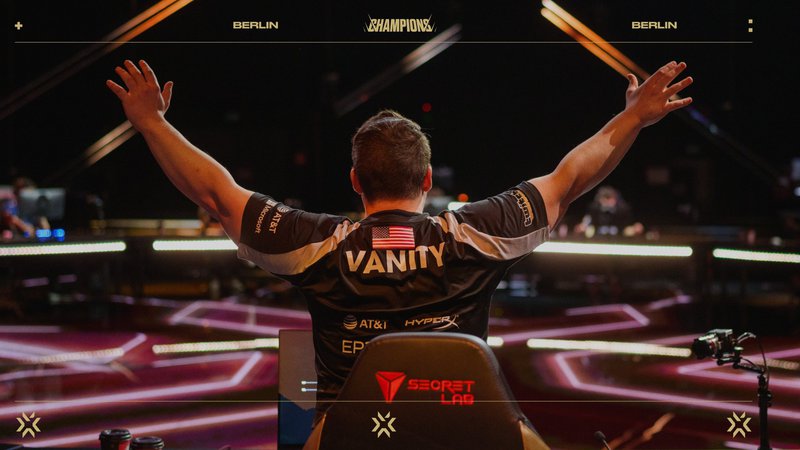 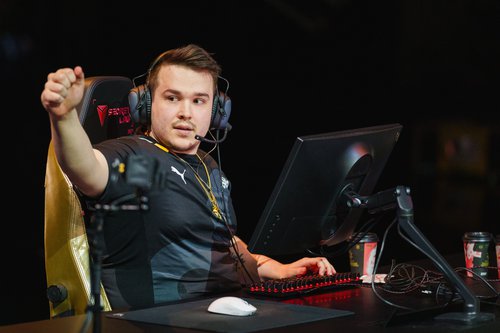 The first map of the day was between the North American team Cloud9 Blue, and the South Korean representatives of Vision Strikes with their tournament lives were on the line.

Vision Strikes came into this series as the slight favorites but everything appointed to a very close series.

On Ascent Cloud9 Blue looked completely dominant in the first half, on the defensive side the North American squad were rock solid, winning most of the duels, and with great utility use, Vision Strikers could find an answer a way to break Cloud9 Blue defense, and the game went into half time with an 11-1 score in favor of the North American side.

The second half brought a different story when everyone was waiting for Cloud9 Blue to close the game, and take an easy victory on the first map, Vision Strikers were able to mount a comeback.

The Korean team won five rounds in a row, Cloud9 Blue finally got on the board on the second half and made the score 12-6, despite that Vision Strikers were able to close the gap to 12-10 but their efforts would prove to be in vain as the North American squad was able to close the first map 13-11. 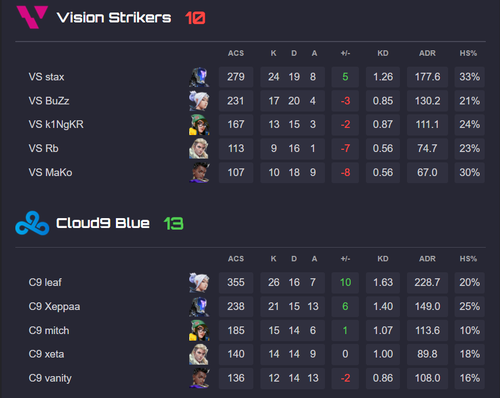 On Split, the first half was very back and forth, with the team's trading rounds, and the score at halftime was 6-6.

Vision Strikers defense in the second half was really good, the South Korean team took control of the game after winning the first three rounds of the second half and never let it go after that. The Korean representatives won the second map 13-9 and forced a third and decisive map. 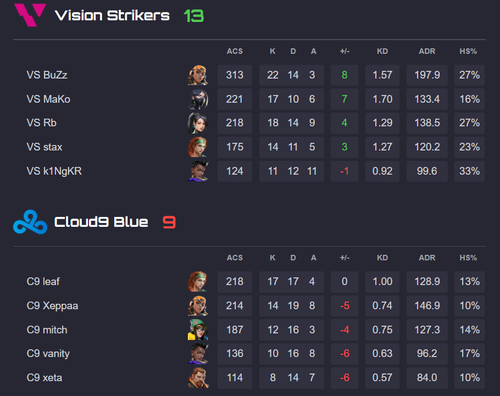 Breeze was where it all was going to be decided, on the first half Cloud9 Blue with an amazing attacking side took control of the game and lead 8-4 at halftime.

In the second half, the teams traded rounds, and Vision Strikers attempt to come back once again fell short, on the back of a great attacking side Cloud9 Blue won the map 13-11 and took the series 2-1, advancing to playoffs while Vision Strikers are eliminated from the tournament. 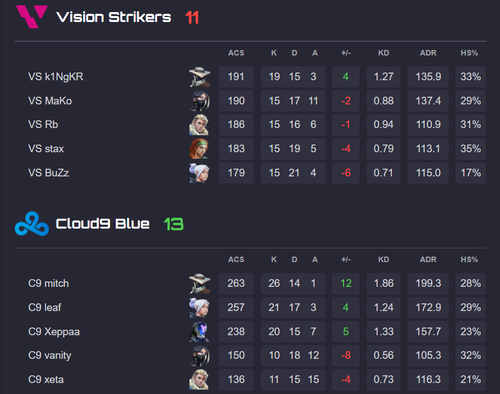 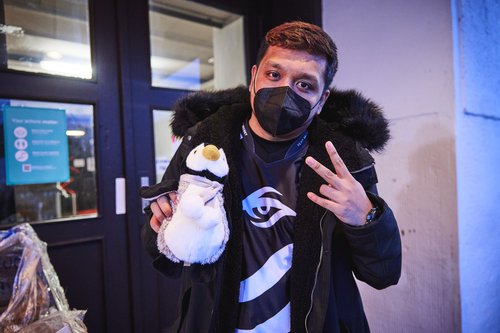 The second series of the day brought us the last Brazilian team in the tournament, Team Vikings, battling against SEA representatives Team Secret for a spot in the playoffs.

Haven was the first map of the series and the SEA team came out swinging, with great utility use, and the team doing a great job setting up Dubstep for success, Team Secret took control of the game with an amazing performance on the defensive side, taking a 9-3 lead into halftime.

The second half saw Team Secret continuing their good play, and with a great team effort, they easily won the first map 13-6. 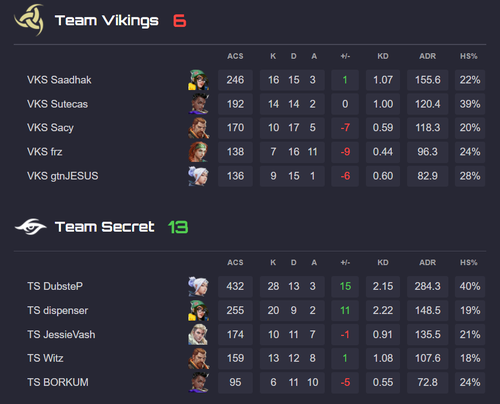 On Team Vikings map pick, Icebox, the Brazilian side actually had a good start, winning the pistol and eco round.

However Team Secret was quick to react, and just as they had done in the first map the SEA squad showed another great half on the defensive side, they were prepared for everything Team Vikings would through at them and took the 8-4 lead in the halftime.

Team Secret closed out the game in the second half winning 13-7, and with a great performance on this series, the SEA representatives will now advance to the playoffs where they will face of against Acend, as for Team Vikings this is the last we will see of them at Valorant Champions. 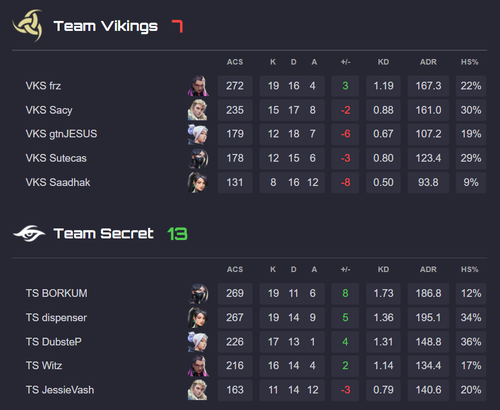 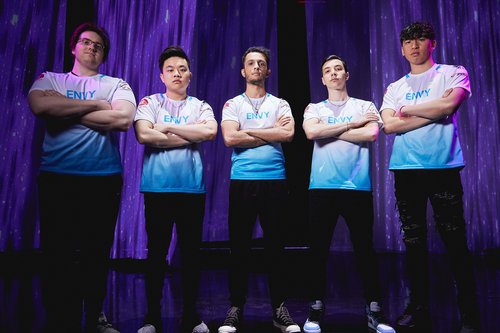 The last series of the day had Envy facing of against X10 CRIT, with the North American squad being the heavy favorites.

Icebox was the first map, and it was X10 CRIT pick, the SEA team started really well on their attacking side getting out to a 5-2 lead over Envy. The North American team was able to stabilize their defense but still lost the first half 7-5.

In the second half, Envy was able to take control of the game, winning the first four rounds of the half.

The North American team took their first lead of the game at 8-7, the SEA team still tied the game at 9-9 but Envy would come out on top with a strong finish to the map, wining 13-10 and having the possibility to close this series in their map pick. 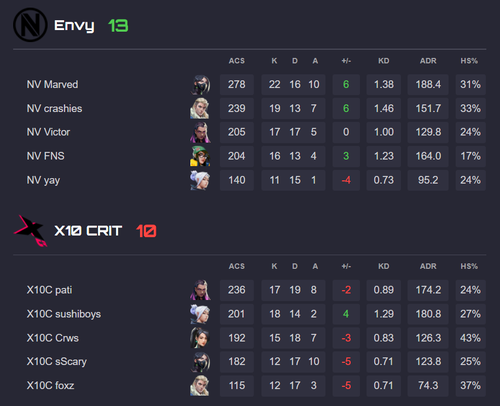 Split was the second map of the series, and Envy was coming into this one with the goal to close out the series with a 2-0.

Despite a really good start by Envy in the first half, winning five rounds in a row, X10 CRIT was able to find their footing in the game and we went into halftime with a 6-6 score.

X10 CRIT riding the momentum they brought from the first half, and with a very good team performance on the attacking side, great use o utility, and some really good mid-round calls, took control of the game.

The SEA region did what many thought unthinkable, and defeated Envy on Split 13-8, forcing a third and deciding map. 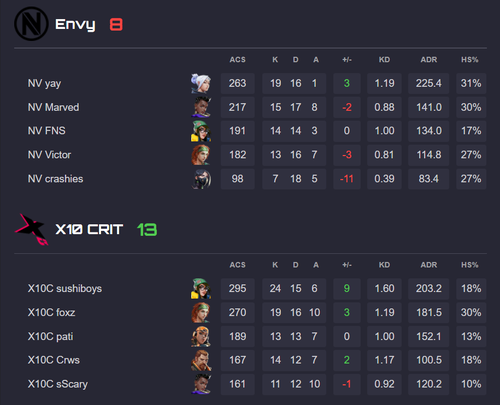 Haven was the third map, and it was a nail-biting of a map.

Envy first half was really good, the North American side showed why they were considered the favorites on their attacking side, with great firepower, and good setups Envy won the first half 9-3, and looked poised to win this map and ultimately the series.

However, in the second half X10 CRIT pulled off one of the biggest comebacks in Valorant history, the SEA team showed an incredibly defensive side and was able to take the game into overtime.

In overtime the SEA team won both rounds and pulled off one of the biggest upsets in Valorant history, eliminating Master's Berling vice-champions Envy, and advancing to the playoffs where they will face Gambit Esports. 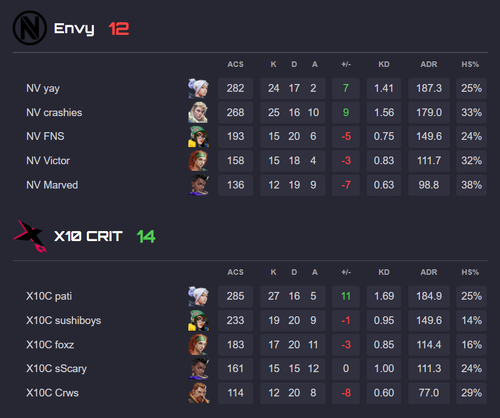 You can also check the vod of this amazing series and the match details.