The Modern Warfare II Twitch Drops are a way of getting in-game stuff for free to offer a bit of a headstart or some unique cosmetics in the recently released first person shooter. For that, the only thing one must do is watch some streams!

The content creators have been going live on Twitch to showcase their skills in MWII multiplayer, and while they level up their guns, the viewers earn some items too. If you aren’t a fan of watching streams, there is no reason you can’t just keep the stream open and muted in another tab while you are busy with something else.

With multiplayer now in full swing, you will want to unlock as many attachments and guns as you can, and with the final tier of reward from these Twitch Drops, you can even add another weapon to your arsenal!

The best sniper rifles in MWII dominate the multiplayer landscape, and luckily, you can unlock a special blueprint for the MCPR-300 simply by watching a stream.

However, these Twitch drops are only running for a limited time after launch, so you don’t have long to ensure you have claimed all of your rewards. This article will guide you on how to claim MWII Twitch drops, what the rewards are, and more!

How To Claim MWII Twitch Drops 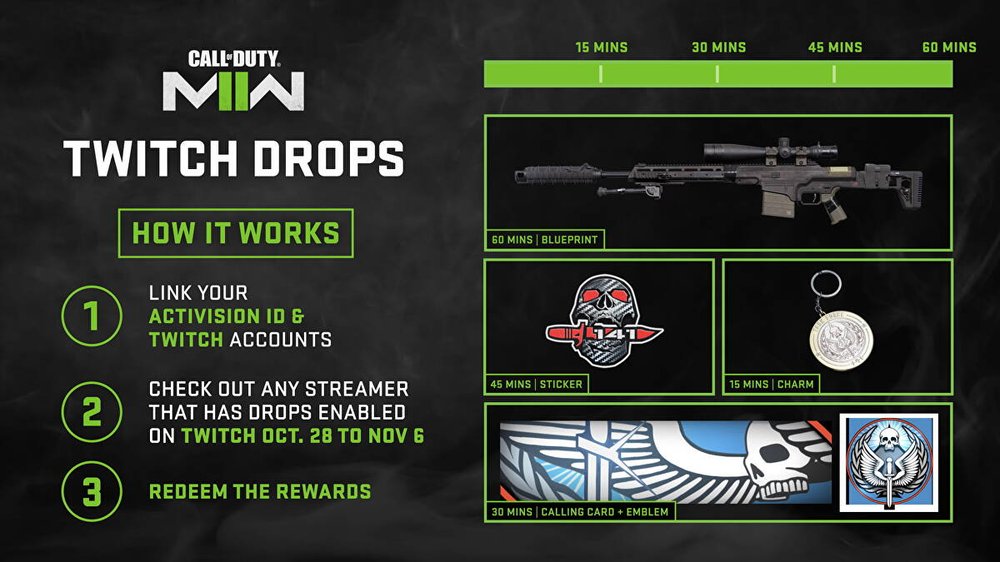 Claiming Modern Warfare II Twitch drops is a pretty straightforward and simple process. However, before you start unlocking items, you must link your Twitch Prime account with your Activision account.

Once that is done, watch any Modern Warfare II Twitch stream with drops enabled for a total of sixty minutes. Following are the steps that one must follow to claim MWII Twitch drops:

Step 1: Create an Activision account if you have not done so already.

Step 4: With drops enabled, watch any Modern Warfare II Twitch stream that you like.

Streamers who have MWII drops enabled will usually put it in their stream description. This means that searching “MWII drops” or “Modern Warfare II drops” on Twitch should result in giving you several streamer choices.

To ensure the streamers have the drops enabled once you start watching, look out for the Twitch drops notification near the chat bar with the MWII logo. This further confirms that watching this particular stream counts towards claiming your Modern Warfare II Twitch drops.

Upon reaching certain watch time thresholds, a Twitch notification will inform you of your new MWII reward. Click on the notification, or go to “Drops” to claim your rewards from your Twitch inventory. When claimed, you will be able to see your Twitch Drops rewards in MWII.

However, in the rare instance that you do not see your rewards, fully shut down the game and then launch it again.

There are seven exclusive in-game items players can earn through Modern Warfare II Twitch drops. Ranging from a calling card to a sniper, there is something for every player. Following is a full list of the game’s Twitch drop rewards:

Is It Possible To Turn Off Call of Duty Modern Warefare 2 Cross Play?
Are you looking for a way to disable Crossplay in Modern Warfare 2? Click on the link to find out more!
15/11/2022
1523 Views