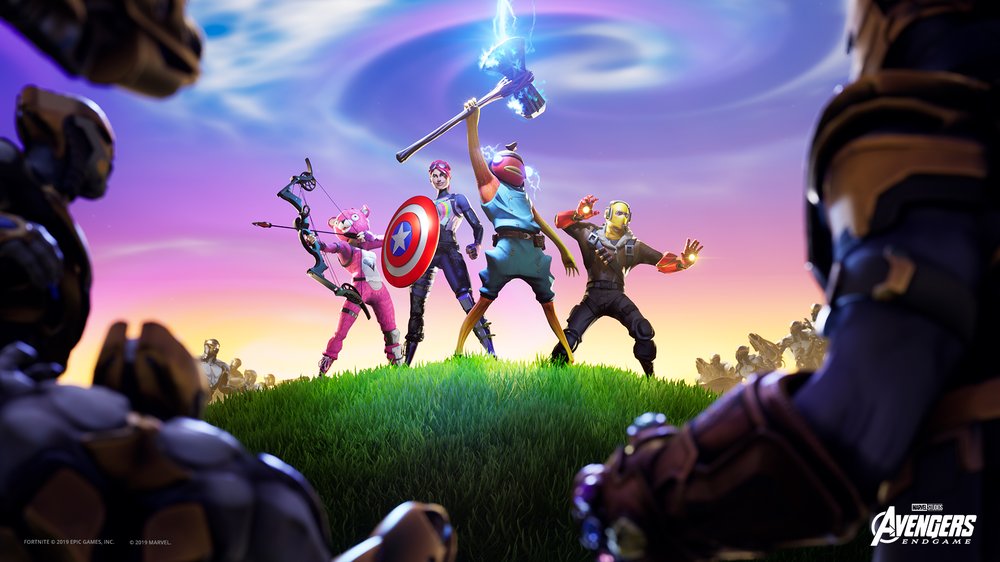 Superheroes are loved by everyone these days. They’re everywhere. You will see them in movies, shows, and even games nowadays. Fortnite has its fair share of superhero skins.

As you know, Fortnite is always willing to add new skins to the game that attract a larger audience. So Fortnite has collaborated with DC and Marvel to bring some of the best superhero skins. 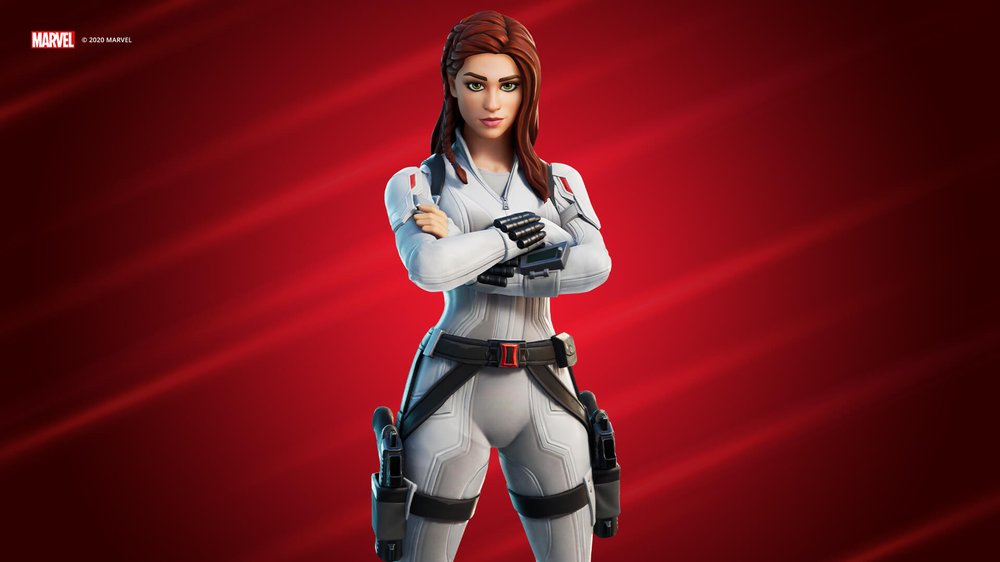 The Black Widow outfit was released on April 25th, 2019. She debuted in Season 8 during the Fortnite X Avengers: Endgame Crossover Event. This outfit was a part of the Avengers Set. Even though this costume is part of the MCU crossover event, it doesn’t feature any likeness to Scarlett Johansson.

Nonetheless, the Black Widow outfit looks fantastic. She fits pretty well within the combat-centric environment of Fortnite. Moreover, she comes in two styles. One is her classic Black Suit, while the other is her white costume from the 2021 film Black Widow. 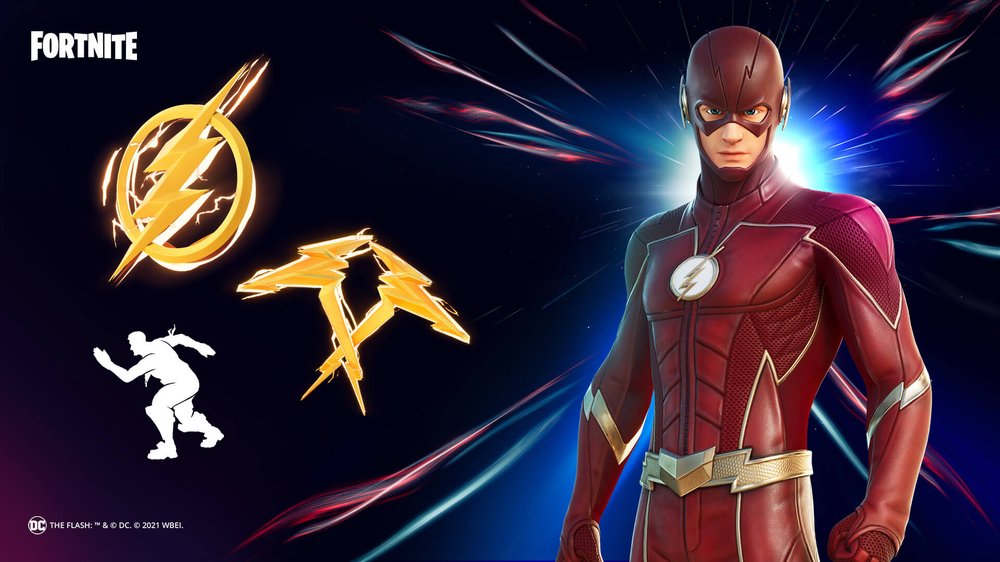 The Flash is the next entry on our list of best superhero skins in Fortnite. He was added to Fortnite as part of The Flash Bundle for 2,200 V-Bucks during Chapter 2: Season 5 on February 14th, 2021. It was last seen in the Fortnite store in February of this year.

The scarlet speedster was a welcome skin in Fortnite. He comes bundled with a dual-wield Harvesting Tool and Back Bling. Both of these items looked quite awesome. This Flash outfit was inspired by the Flash TV Show, which stars Grant Gustin in the titular role. 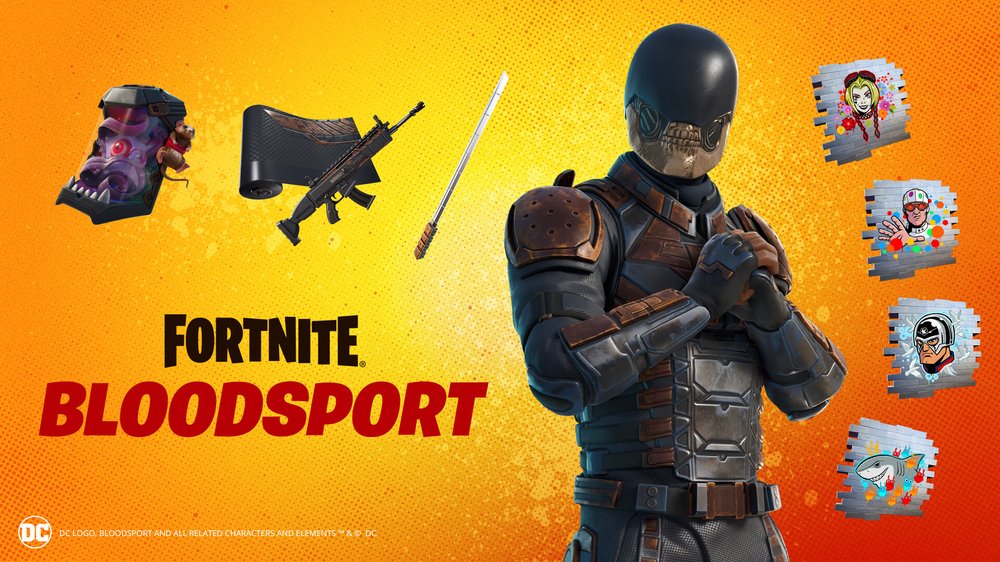 Bloodsport is quite an underrated skin in terms of the best superhero skins in Fortnite. He was added to Fortnite to promote James Gunn’s The Suicide Squad on August 4th, 2021.

Right off the bat, the Bloodsport skin in Fortnite looks stunning. The Bloodsport Bundle contains an A.R.G.U.S. Sabre Harvesting Tool and a Back Bling, which holds Starro. Overall, this skin is incredible in terms of the detailing, and the costume design of Bloodsport has been badass anyways. 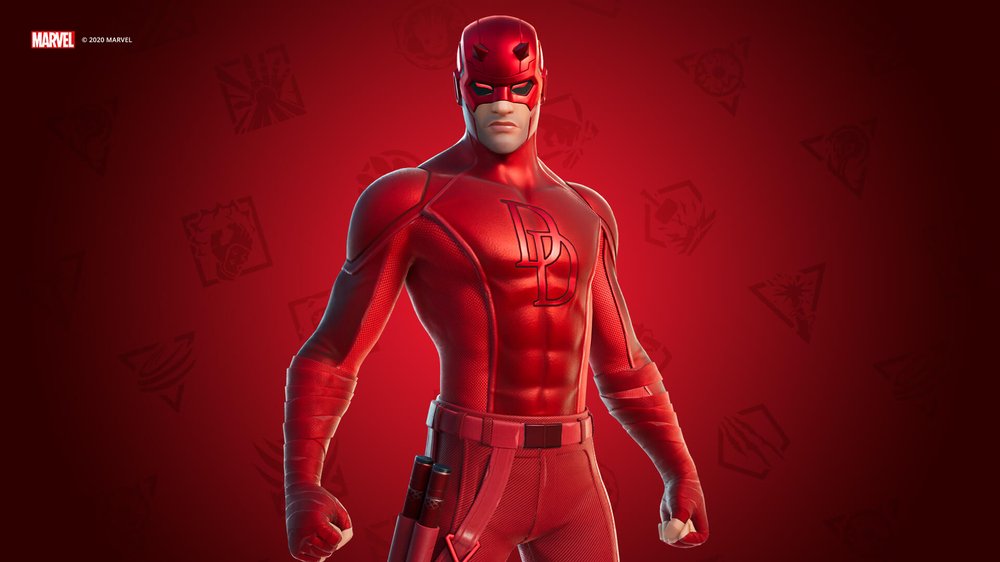 Daredevil is a Marvel Series Outfit in Fortnite: Battle Royale that can be purchased from the Item Shop. As part of the Daredevil Set, he debuted in Chapter 2: Season 4 on October 18th, 2020. This isn’t the Daredevil skin from the Netflix show, but it is a very comic-accurate version of this costume.

The red coloring looks menacing, and the design is quite beautiful. There are two versions of this outfit. One is the default one, and the other is called Illustrated. In my opinion, the Illustrated one looks like one of the best superhero skins in Fortnite. 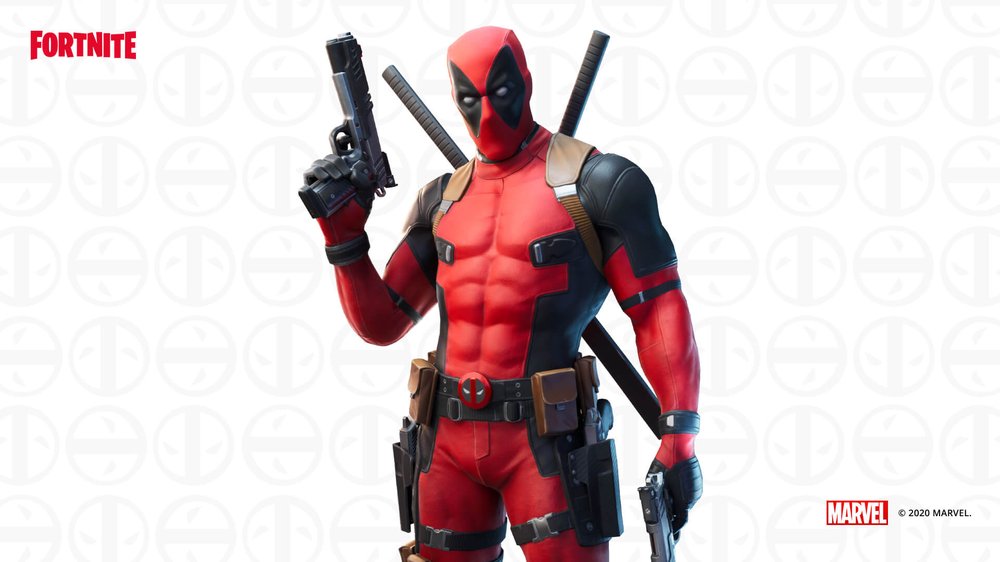 The merc with a mouth, Deadpool, is the next entry on our list of best superhero skins in Fortnite. Deadpool was added to Fortnite on April 3rd, 2020, as part of Chapter 2: Season 2 Battle Pass. He is the first collaborative Battle Pass outfit.

The Deadpool outfit came in 3 different styles. One of them included a Task-Force X design which looked quite badass. Deadpool spent the whole season relaxing on his boat and was a significant element of the season's quest line. However, he was a Battle Pass reward, and it is doubtful you’ll be able to buy this skin again. 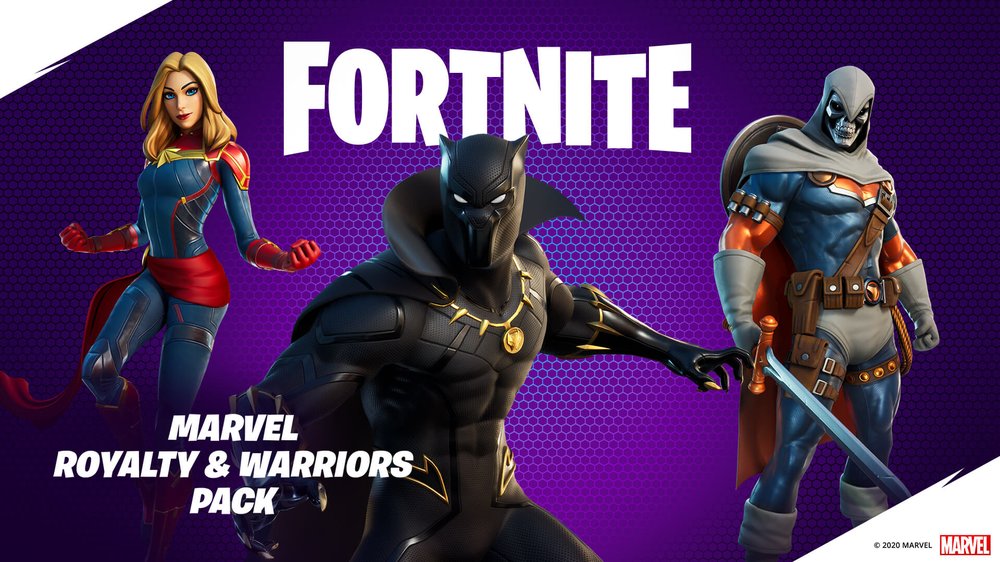 Black Panther was added in Fortnite as part of the Marvel: Royalty & Warriors Pack only a few months after Chadwick Boseman sadly died. The bundle was released on December 22nd, 2020.

The Black Panther skin came in two styles. One was the default one, while the other was Kinetically Charged. It featured purple lightning, which looked quite good, honestly. Moreover, there are a lot of emotions attached to this skin. It is one of the best superhero skins in Fortnite. 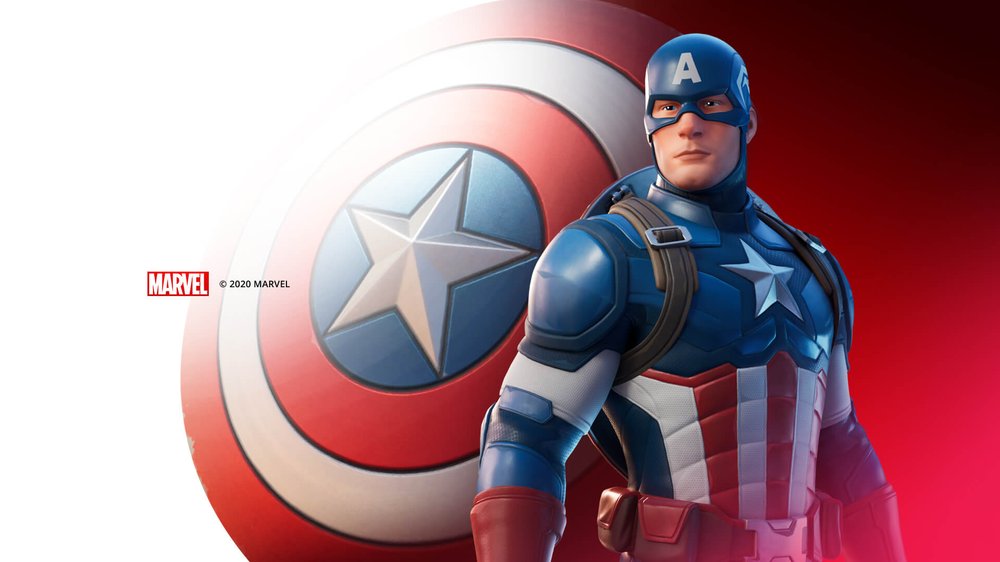 Fortnite added Captain America during Chapter 2: Season 3 on July 3rd, 2020. He was part of the Avengers Set alongside Black Widow. This skin is a mix between the MCU costumes and comics.

Captain America comes with a Proto-Adamantium Shield, which is a Back Bling. The overall skin looks perfect. There’s a little easter egg associated with this skin. Only Captain America, Thor, Thor Odinson, and Mighty Thor may wield the Mjolnir Harvesting Tool. 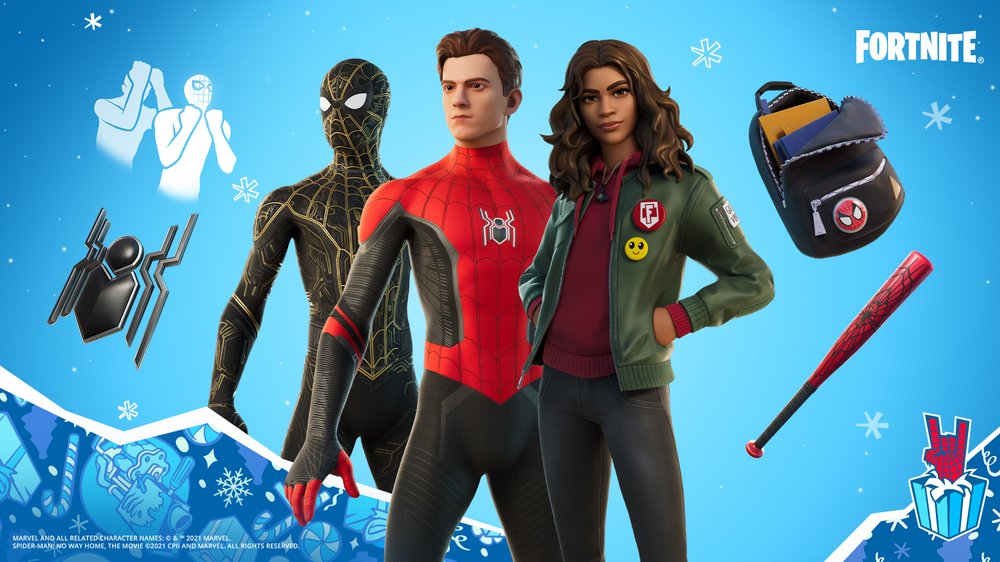 Your friendly neighborhood Spiderman was added to Fortnite in Chapter 3: Season 1. Spiderman, alongside MJ, was part of the No Way Home Set, released on December 17th, 2021.

Spiderman came in multiple styles, including his red and black look from the MCU movies and the black and gold suit seen in Spiderman: No Way Home. The outfit also bears a resemblance to actor Tom Holland. There have been other versions of Spiderman skin in Fortnite, but this one is the most high-quality one.

“Genius, Billionaire, Playboy, Philanthropist” Ironman was added to Fortnite on August 27th, 2020. He was part of Chapter 2: Season 4 Battle Pass and could be unlocked once you reached Level 93.

Once you completed Tony Stark's missions, his skin would transform into Iron Man, featuring m multiple styles. It also included nanotechnology-powered weaponry such as flying wings and an energy blade gathering gadget. 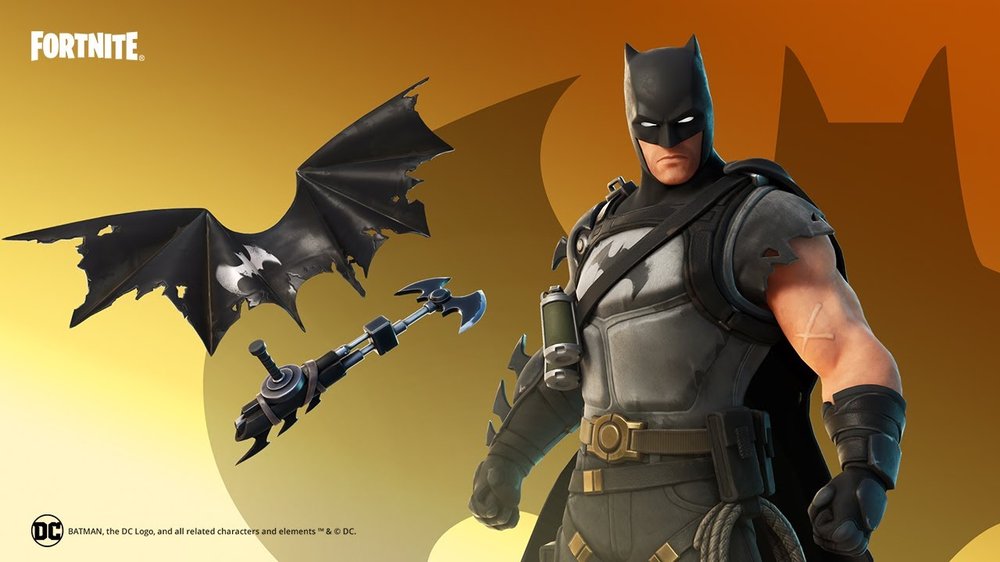 Coming at the number 1 spot, we have Batman. While there have been two different skin packs for Batman in Fortnite, we’re discussing the Batman: Zero version. This skin was released as part of the Batman: Zero Point Set on May 5th, 2021.

Who doesn’t love Batman? Moreover, the overall design of the Batman Zero and Armored Batman Zero looks badass. What’s unbelievable is that Kevin Conroy voiced this version of Batman. It is a fantastic superhero skin in Fortnite.

So these were our picks for the best superhero skins in Fortnite. We hope you guys enjoyed it.

Best Landing Spots And Loot Locations In Fortnite Chapter 3 Season 3
With all these changes taking place, if you want to figure out the best landing locations for the start of your games in Fortnite, here is a list of all the best landing spots in ...
21/06/2022
1103 Views

How To Cancel Your Fortnite Crew Subscription
Fortnite Crew is a great subscription model for people who don’t want to sit through the process of purchasing the Battle Pass every month. However, a person may need to cancel th...
14/08/2022
1296 Views

How Many People Play Fortnite Player Count (2022)
Fortnite has attracted 10 million gamers just 2 weeks just after its release. Throughout this time, Fortnite had a 350 million player base, with 22.5 million new players who joine...
07/06/2022
1790 Views
Comments
No comments yet
Please login to leave a comment.
Login
Streams
Live
Streams
Live
Popular