The Rarest Pickaxes in Fortnite (2023)

The Pickaxe (or Harvesting Tool) in Fortnite is an essential tool exclusive to the game. It is used in many different scenarios and adds a new depth to the in-game mechanics. And I think it is safe to say that Fortnite wouldn’t be as fun as it is without the pickaxe.

The Pickaxe can also be used to give you an advantage in fighting. When you are build-fighting in Fortnite, you often find yourself in the position where the enemy is low on HP, but he keeps placing a wall between you and him, not allowing you to land the final hit. In this case, most players whip out their pickaxe to use it to break the wall since the pickaxe is the fastest way of breaking a structure in Fortnite.

Anyways, enough about the use of pickaxe, let’s talk about the rarest pickaxe skins in Fortnite.

The pickaxe has also had some of the best-looking skins out of all weapons in Fortnite. In fact, Epic Games has added more variations to the pickaxe style over the years. For example, when it first came out, all pickaxe skins used to be held in both hands. Then later, they released dual-wielded pickaxes, two axes held in one hand.

Then they also released single-hand pickaxes, swords, etc. And we can be sure that Fortnite will be releasing new styles in the future. 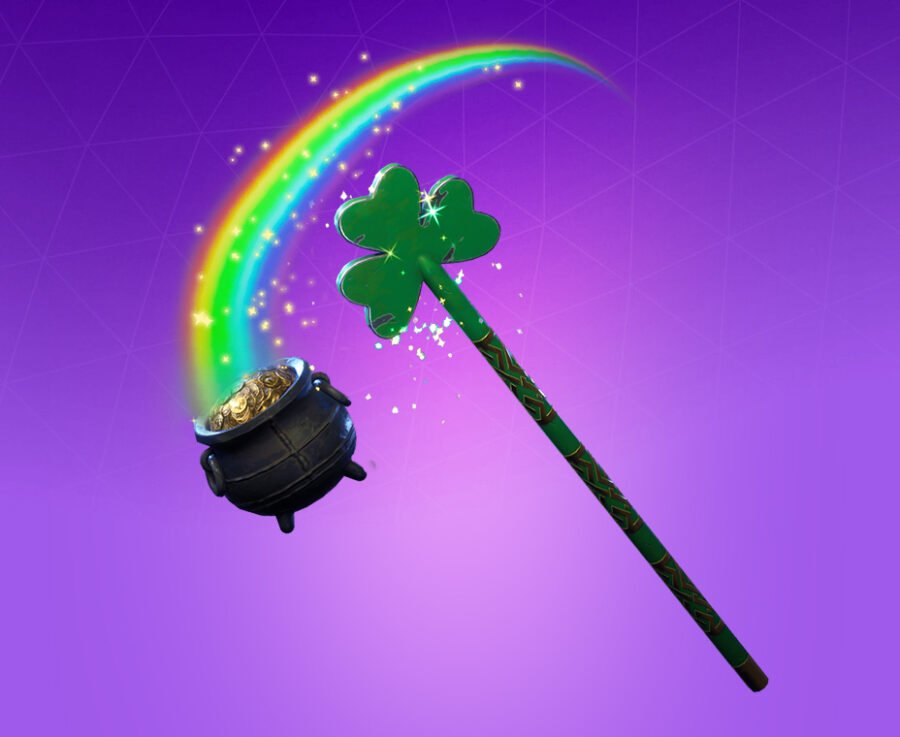 The Pot o’ Gold is an epic pickaxe that was released as a part of the Green Clover set. It was based on the St. Patrick’s Day theme and was released on March 16, 2018, four years ago as of the time of writing this article (2022)! Despite being this old, it is still number 10 on our list of the Rarest Pickaxes in Fortnite.

The pickaxe had a three-leaf clover at the head of it, which was overshadowed by a rainbow. And at the end of the rainbow, we can see a Pot of Gold, just like the famous folk tale! 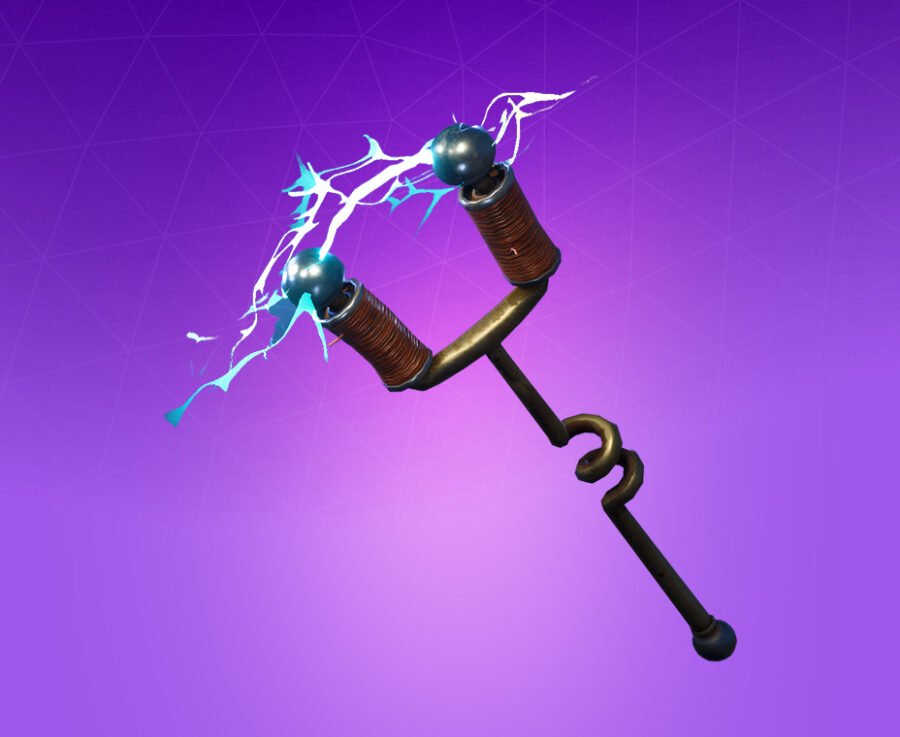 The AC/DC is an iconic pickaxe in Fortnite that all OG players will remember of the game. It was released as one of the Battle Pass rewards in chapter 1, season 2, which came out on Dec 14, 2017. 5 years ago! Players could unlock it by reaching level 63 of the Battle Pass.

Fortnite was still relatively new then and only starting to grow. This is why not many players purchased the battle pass, making this pickaxe one of the rarest in the game.

AC/DC is an Epic rarity pickaxe that converts the head of your pickaxe into two conducting rods which some current jumping between them. The pickaxe isn’t a part of any skin set. 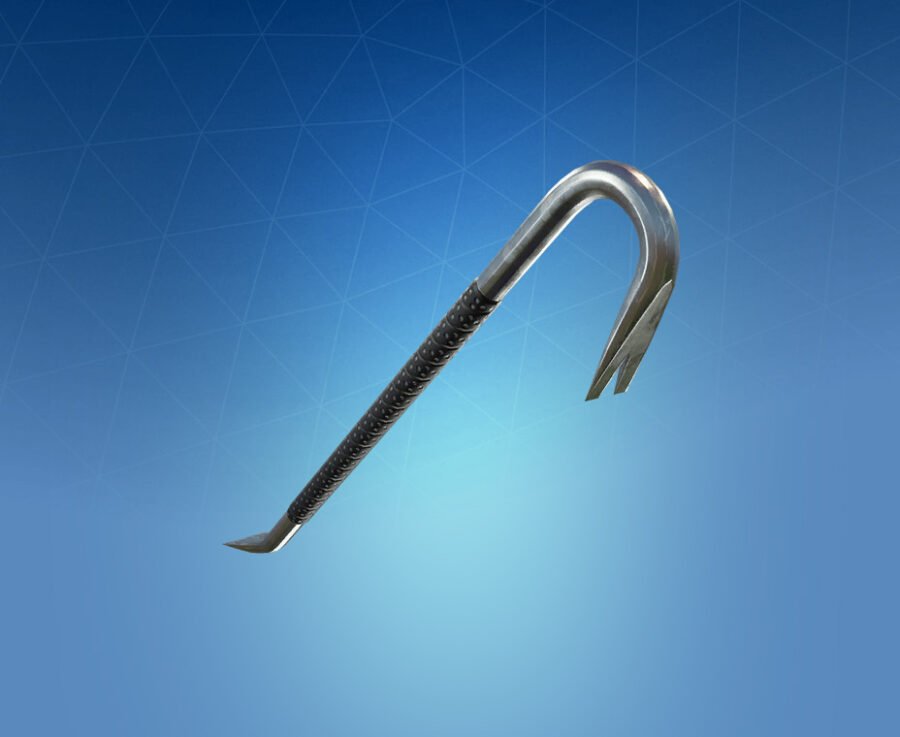 The Crowbar pickaxe was released as a reward for completing the challenges in the limited-time “Getaway” game mode released on March 14, 2019. To obtain the pickaxe, players had to complete the following “High Stakes Challenges”:

Play 10 matches of The Getaway, Deal 500 damage to jewel-carrying opponents Pick a jewel in 5 different matches

It is a Rare quality pickaxe that is a part of the High Stakes Challenges set. It changes your pickaxe to look like a crowbar. 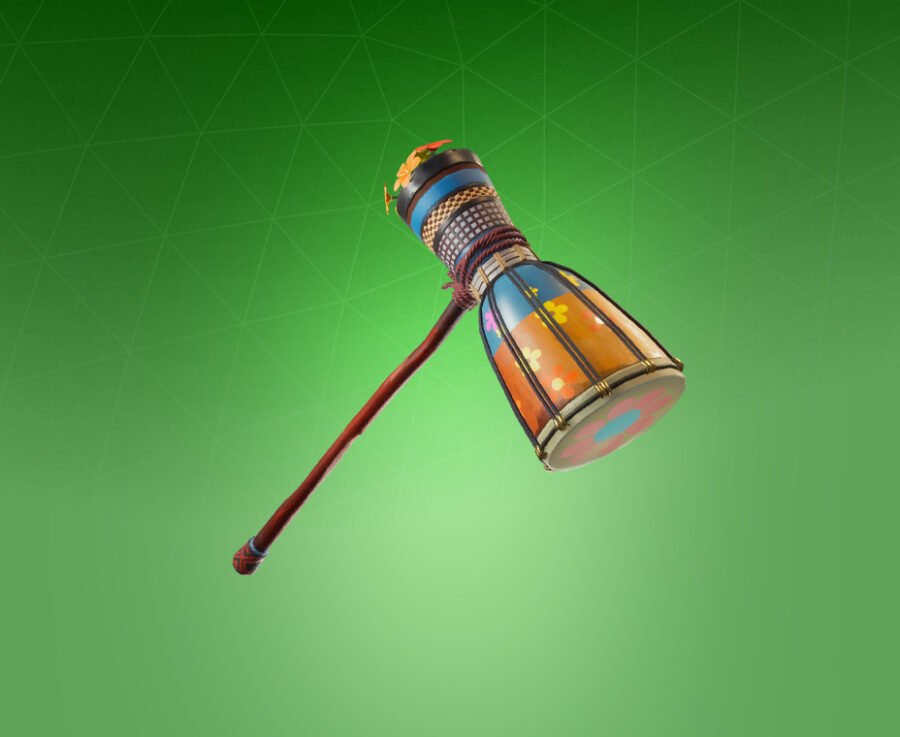 The Drumbeat pickaxe was released in the game on September 2, 2018. It could be purchased from the in-game Item Shop for 500 V-Bucks. It is of Uncommon rarity and was first added to the game in Fortnite Chapter 1, Season 5.

This pickaxe was released with the Flower Power set. It transforms the head of your pickaxe into a drum. 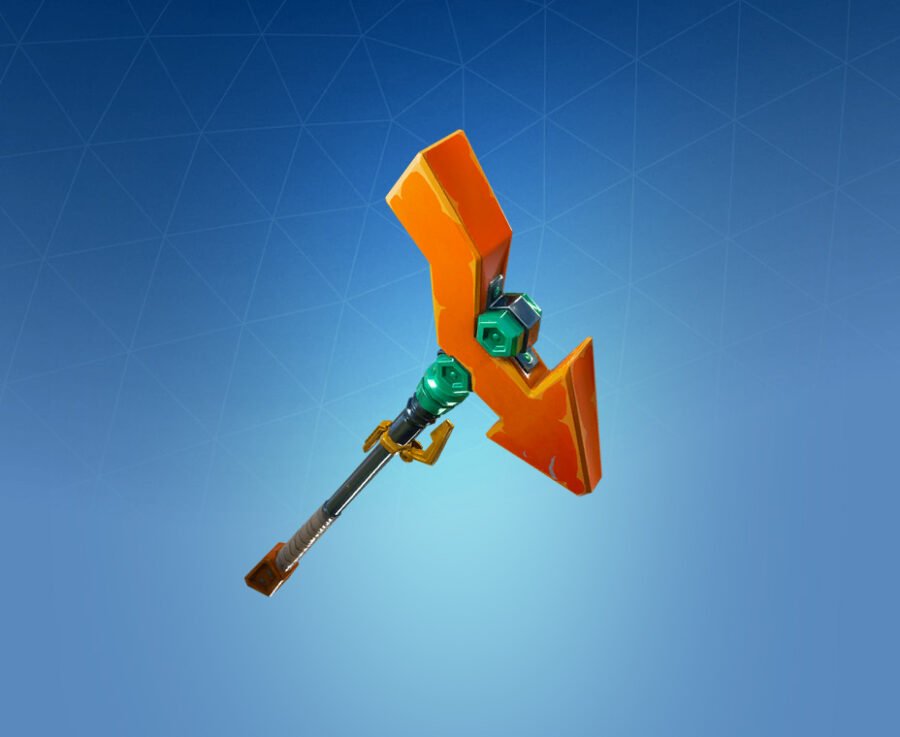 The Pointer pickaxe was added to the game on July 11, 2018, in Chapter 1, Season 5 of Fortnite. It could be purchased from the in-game Item Shop. It is a Rare harvesting tool that was exclusively released to the players in China. There is no way to obtain the pickaxe outside the country.

It transforms your pickaxe into an orange-colored arrow. 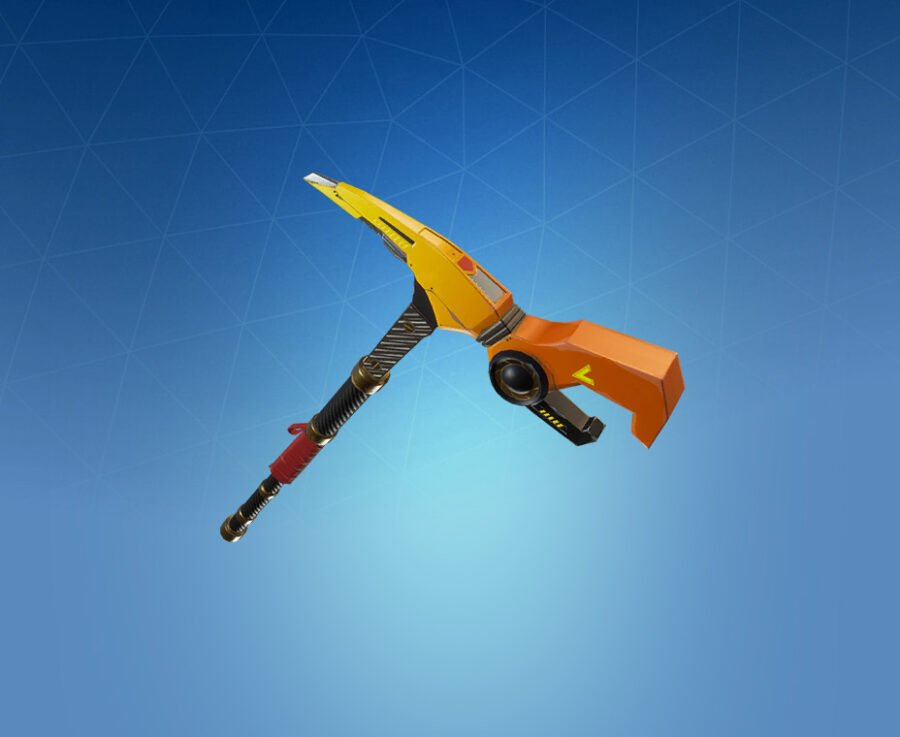 The Power Grip pickaxe is another China-exclusive pickaxe that cannot be obtained outside the country. It was released on July 11, 2018, in Fortnite Chapter 1, Season 5.

It transforms the player’s pickaxe into an industrial gripping tool painted in yellow and orange. 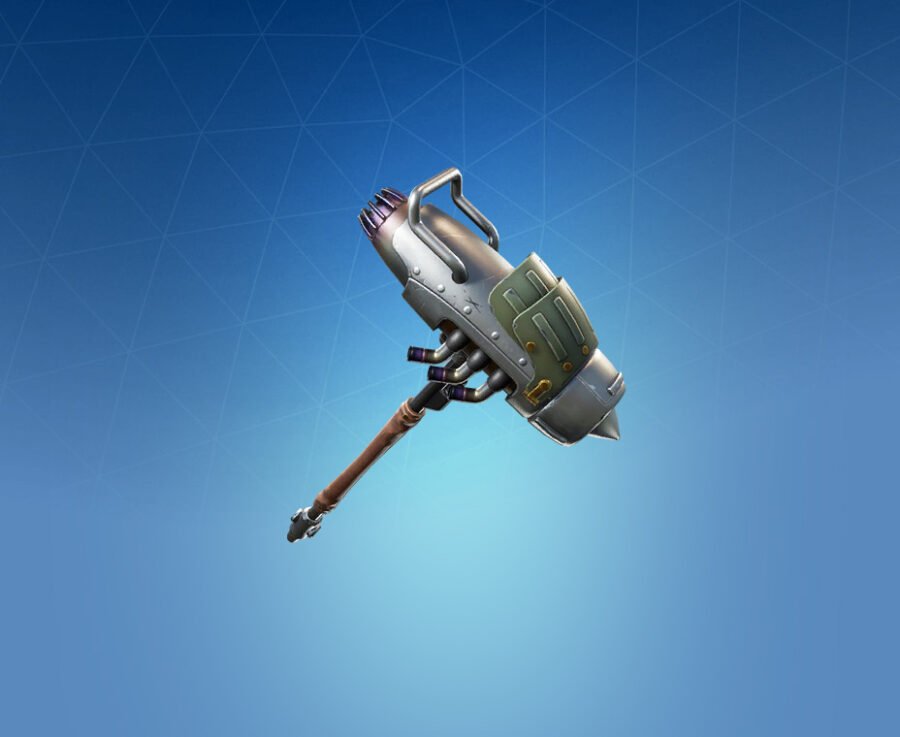 The Turbine is a rare quality skin in Fortnite, which was released on September 30, 2018, in Fortnite Chapter 1, Season 6. It was available to purchase in the in-game Item Shop for 800 V-Bucks. The Turbine pickaxe was a part of the Aviation Age set and hasn’t been seen in the Item Shop for quite some time.

This pickaxe makes the head of your pickaxe look like the engine of a jet. 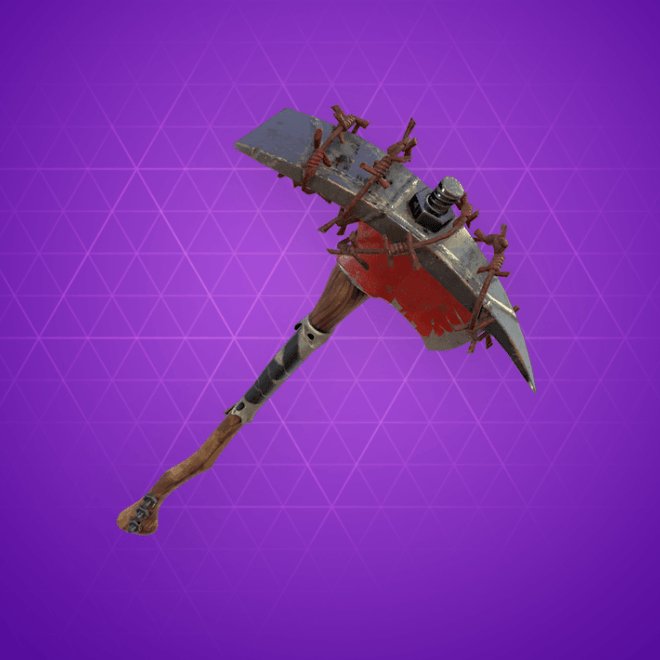 Taking up the third spot on our list of the rarest pickaxes in Fortnite is the Raider's Revenge. It was released very early in the game’s lifetime and was only available in the first ever season of Fortnite.

Players could purchase this skin for 1500 V-Bucks from the Season Shop after achieving level 35. It is a part of the Storm Scavenger set and looks somewhat like a regular pickaxe with a blade screwed on the top and covered in barbed wire. 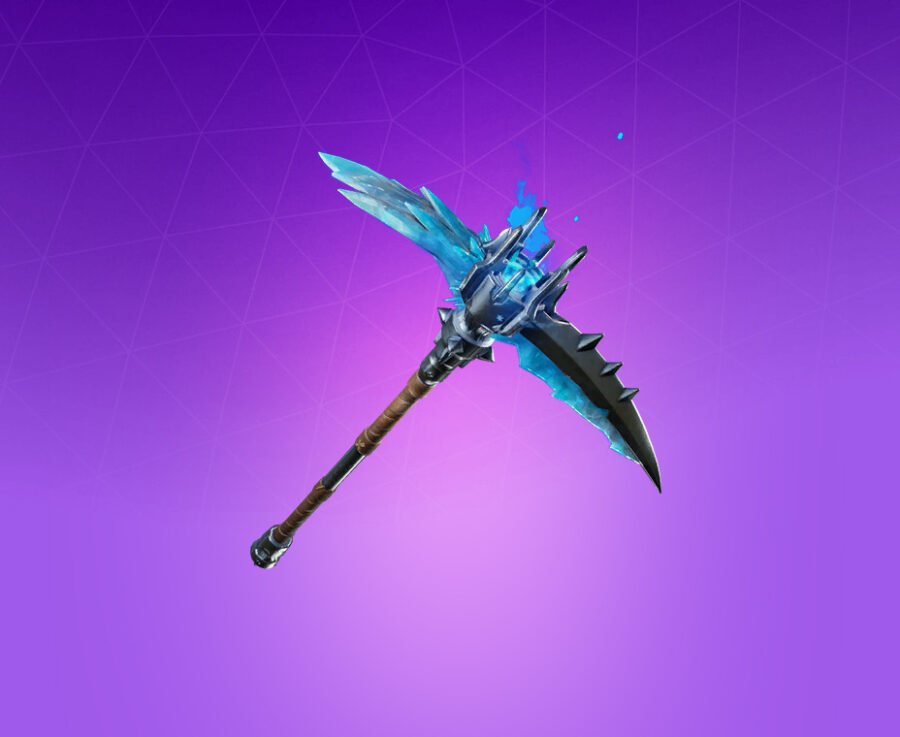 The Permafrost pickaxe was released in Fortnite Chapter 1, Season 5, as a part of the Harbinger set. It was available for the players who purchased the premium Battle Pass and reached level 100. They also had to complete the Ragnarok Challenges during season five.

This cool-looking pickaxe is half made of ice that is said to be chiseled from glacier ice. The challenges and requirements that needed to be completed to unlock this pickaxe make it one of the rarest in Fortnite. 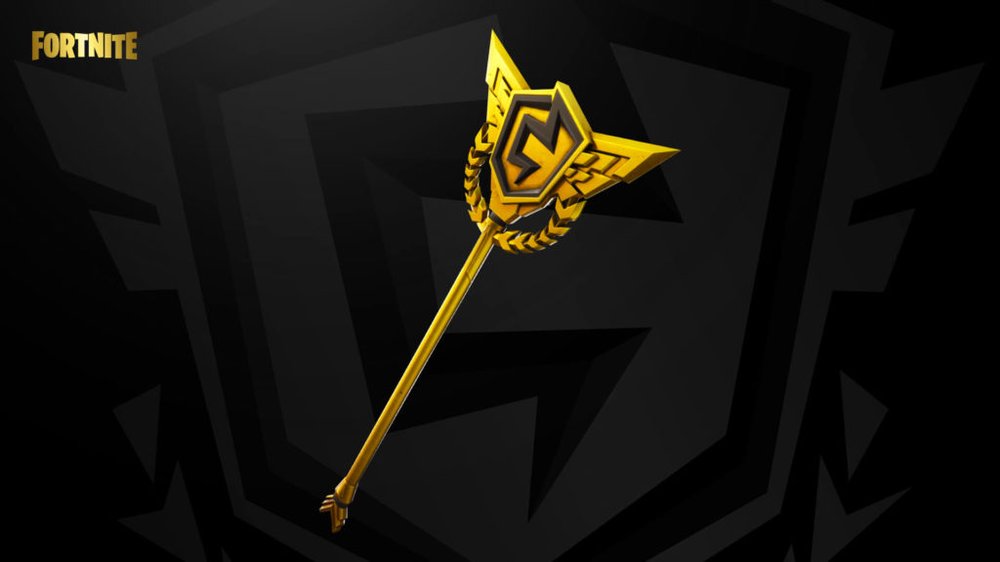 The FNCS Axe Of Champions is undoubtedly the rarest pickaxe in Fornite! It was never publicly released. Instead, it was only given to the players who won the Fortnite Championship Series, making it immensely rare. But wait, it gets better.

Not only that, but if you want to keep the ownership of this pickaxe, you have to be the current champion. Because once a player replaces you, you’ll lose the pickaxe.

The FNCS Axe Of Champions looks beautiful and shiny and has the FNCS logo on top.

Best Landing Spots And Loot Locations In Fortnite Chapter 3 Season 3
With all these changes taking place, if you want to figure out the best landing locations for the start of your games in Fortnite, here is a list of all the best landing spots in ...
21/06/2022

How Many People Play Fortnite Player Count (2023)
Fortnite has attracted 10 million gamers just 2 weeks just after its release. Throughout this time, Fortnite had a 350 million player base, with 22.5 million new players who joine...
07/06/2022

How to Refer a Friend in Fortnite and Earn Rewards
When playing with friends, Fortnite is a lot more entertaining game. Fortnite's creators have developed a new method for all gamers who want to invite their friends to play alongs...
30/05/2022
Comments
No comments yet
Please login to leave a comment.
Login
Streams
Live
Streams
Live
Popular