How To Hide In A Giant Snowball In Fortnite

There have been a lot of new advancements and updates in the world of Fortnite. It starts from different modes, such as Battle Royale and the Creative mode, where you can literally do and build anything you wish to.

Moreover, there is a wide range of cool customizations such as emotes, gliders, pickaxes, skins, and so many more. Players have been exploring this game since it was released, and they still have not gotten bored with this amazing game.

Moreover, there are new events, challenges, and new seasons every other day in which new resources are released that you can buy anytime. At the start of every season, specific cosmetics are released so people can play and dress according to the theme.

What really excited the players were the robot skins that were released, each one better and more stylish than the last. They are so life-like yet fictional that playing a match with them was the real thrill.

Imagine what it would be like if we could get one of the robots to actually do our bidding. Fortnite helps to bring us one step closer to this image as you can easily become an assassin, robot, or cyborg by unlocking the following thrilling skins!

Here is a list of the Top 10 Robotic Skins introduced in Fortnite: 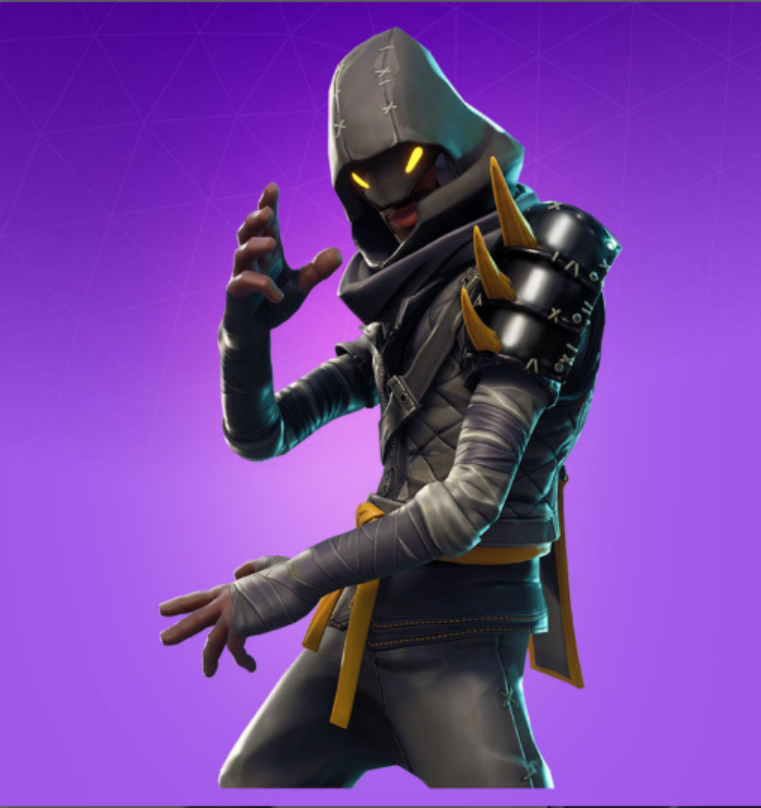 The Cloaked Star skin is a stylish yet savage one that was released in Season 5 Chapter 1 of Fortnite. It is an Epic Fortnite Outfit and can be purchased from the Item Shop for 1,500 V-Bucks.

Cloaked Star is a fairly unique skin with a little touch of street style mixed with the get-up of an assassin. It features spikes a spiked armor, with an overall coloring of gray and black, with little specks of yellow that catch the eye.

The face is also covered with the help of a hood, thus completing the whole assassin/cyborg look. This skin has been rated the best one among all the robot skins and can prove to be an intimidating character for your enemies! 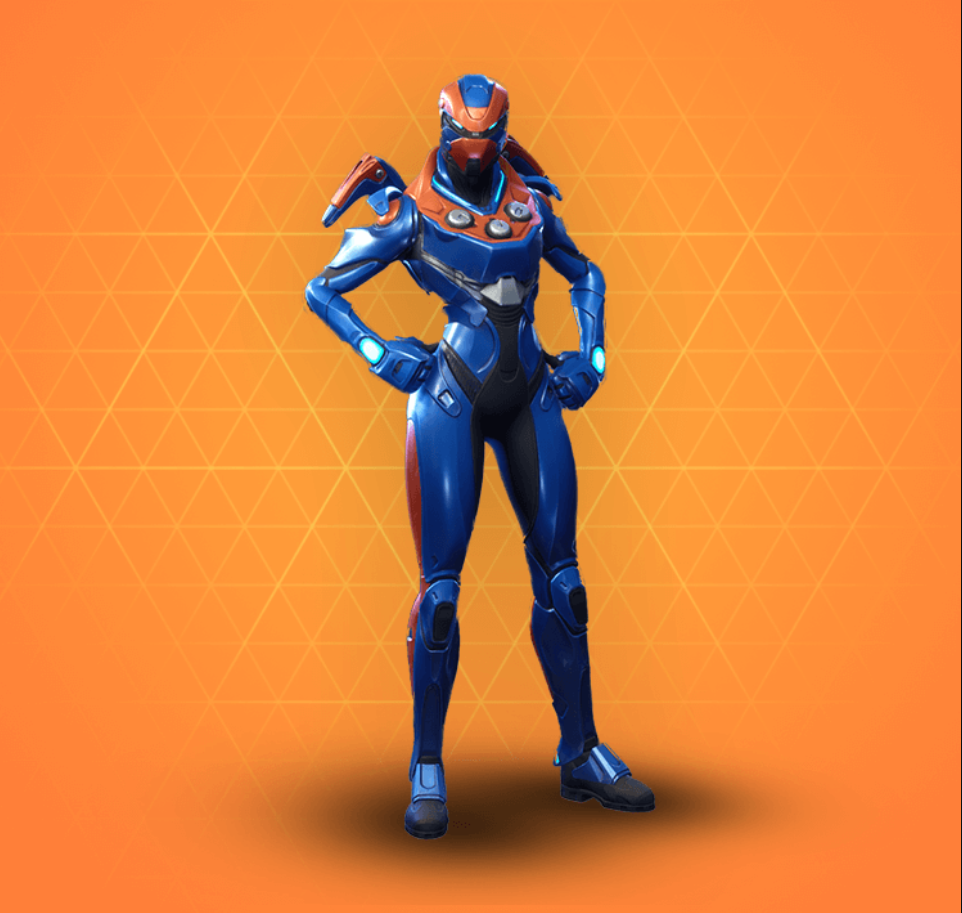 Giving off the Power Rangers vibe, this skin consists of blue armor with copper plating on the chest and a robot-like helmet. This outfit also features some unique yet cool gadgets as a part of its armor.

The Criterion Skin can be easily bought from the Item shop for 2,000 V-Bucks, and it was released in Season 4 of Fortnite. This skin is a Robotic Superhero with the description of “Unwavering dedication.” This skin also has a female counterpart with the name of Oblivion.

This outfit makes it easy for one to show off in front of friends and foes and to make them jealous. Furthermore, if you fly in a match, kill someone, and do the Robot emote while wearing this skin, it is safe to say that you are officially a cool robot/human! 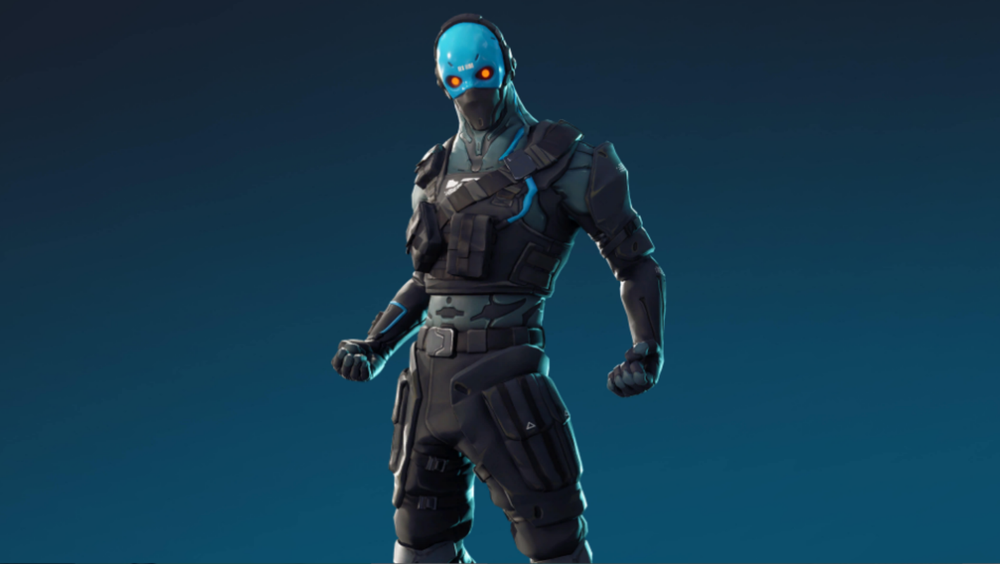 This elegant yet terrifying robotic skin was released in Season 1 Chapter 7 of Fortnite. Cobalt is an Epic that is some kind of an android trained to murder opponents from the battlefield. He is protected from oncoming attacks by combative armor and synthetic liquid, making his defenses nearly impenetrable.

This skin comes off as some sort of a demonic soldier from another dimension with a really evil look. It has dark grey color with hints of blue, including most of its head. The eyes, though, are what catch our attention as they are yellow in color and provide that wicked element.

Unfortunately, you will need to spend $4.99 to equip this skin, which might be a downside for some players. However, this cool cybernetic assassin totally makes up for that and is worth the price! 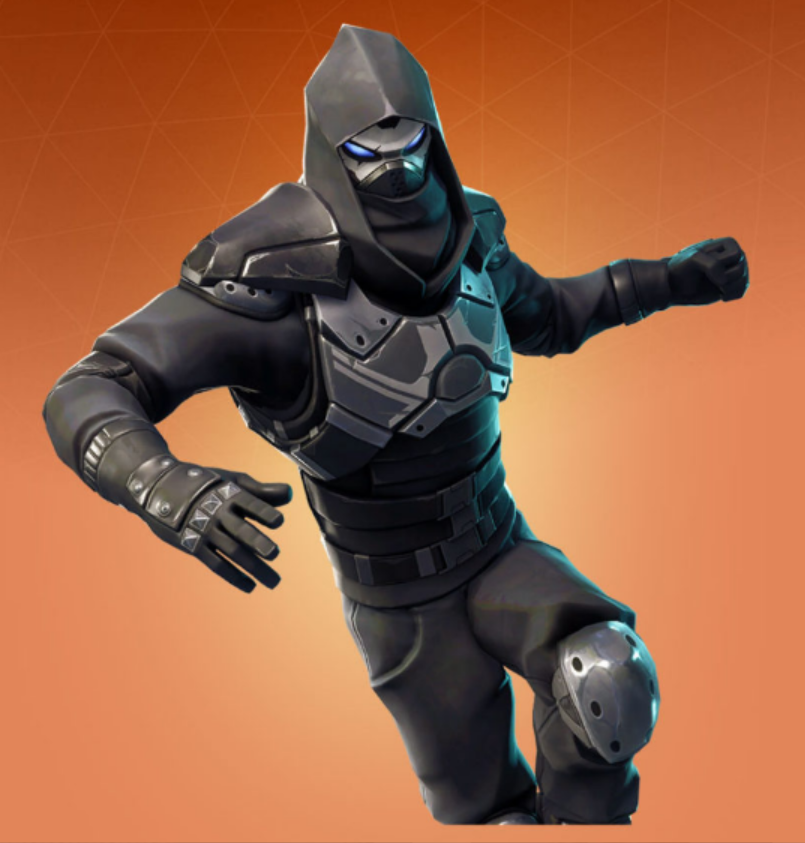 Enforcer is a Legendary Outfit in Fortnite that can be earned by completing seven weeks of challenges in Season 5 of Fortnite. This outfit has a color combination of grey and black, with a chest plate and kneecaps. It consists of a hood on its head and a mask on its face.

Assassinate and terrify your opponents with this robotic skin, and terrorize the whole of the map. When the other players see you descending with this skin, they will change their path and try to stay farthest away from you. So, go on and equip this terrifying skin and start scaring people! 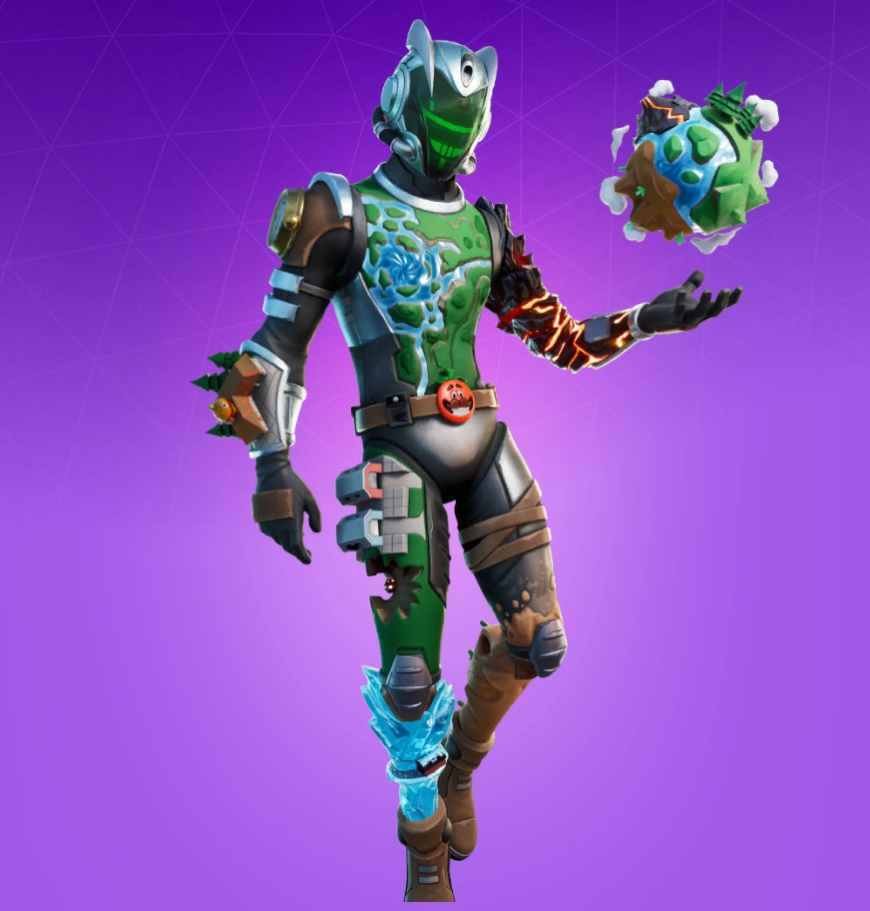 This classy yet stylish robotic skin is for the environment-friendly people out there. The ECO Skin is an Epic Fortnite skin and belongs to the Terra Firma Set. It was first added to the game in Season 6 Chapter 2 of Fortnite and can be bought for 1,500 V-Bucks once listed.

This Planetary Android is popular among players as it is constructed with different materials worldwide. You can see grasslands, mountainous terrain, melting icebergs, and erupting lava all over this skin. When looking closely, you can also see a few houses on it.

So, save the environment and protect humanity from climate change while freezing or burning a few opponents’ skins off while playing matches with the ECO Skin! 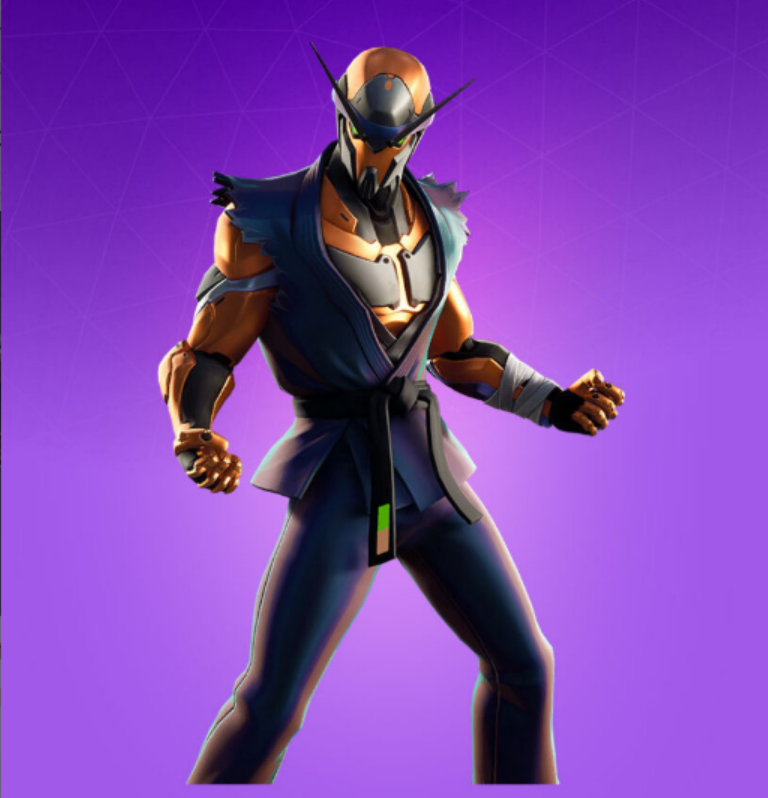 This Robotic Karate Master skin can be obtained from the Item shop for 1,500 V-Bucks. It was released in Season 9 Chapter 1, and is a part of the Kata Tech Set. This is polished and cool skin that holds a black belt in karate, as seen from its outfit.

As mentioned in the name, it has a copper color with a mixture of gray and silver highlights. The gi he is wearing perfectly compliments his robotic skin and is blue, teal, or gray in color, depending on how one looks at it. He also has a bandage on his left hand to give off a rough look.

This skin is basically a robot wearing a gi which shows that he is a robot with extraordinary skills in martial arts. So, you can either judo-kick your opponent dead or blow him away. 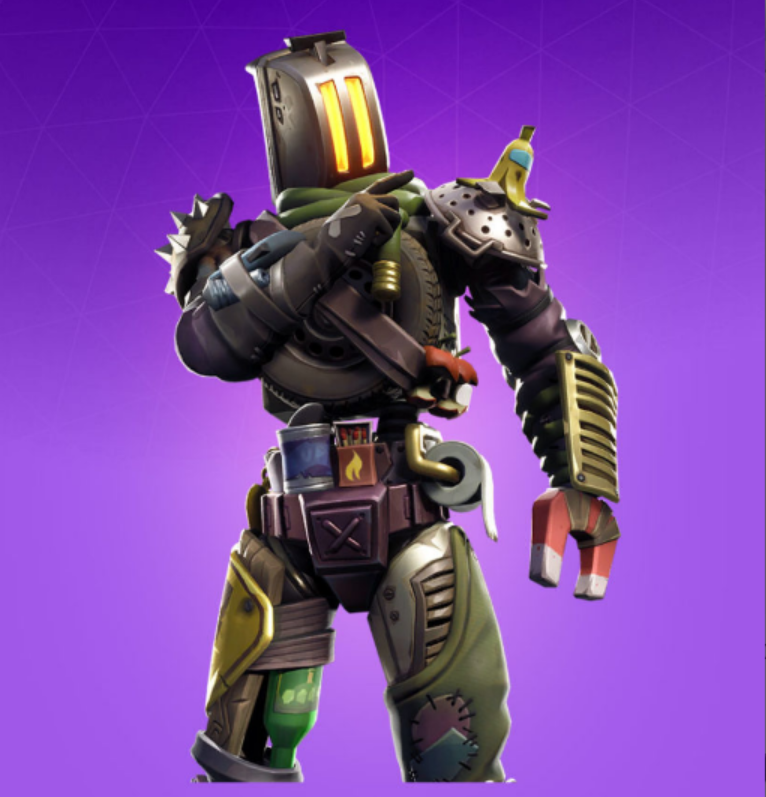 Plain old household items and landfills were put together, and this glorious skin was the result of this combination. The Kitbash skin belongs to the Boneyard Set and can be bought for 1.500 V-Bucks from the item shop. It was released in Season 7 Chapter 1 of Fortnite.

This robot might seem like one that was found at a Dumpster like Atom from Real Steel, but it definitely is the toughest and sassiest one out there. The Kitbash skin has been ranked amongst the OG Skins in Fortnite.

You can see all sorts of items strapped to this outfit, such as matches, duct tape, a bottle, a tire as his chest, a banana peel, an apple core, a hose, a magnet on his left hand, a burning toaster as his head, and much more. 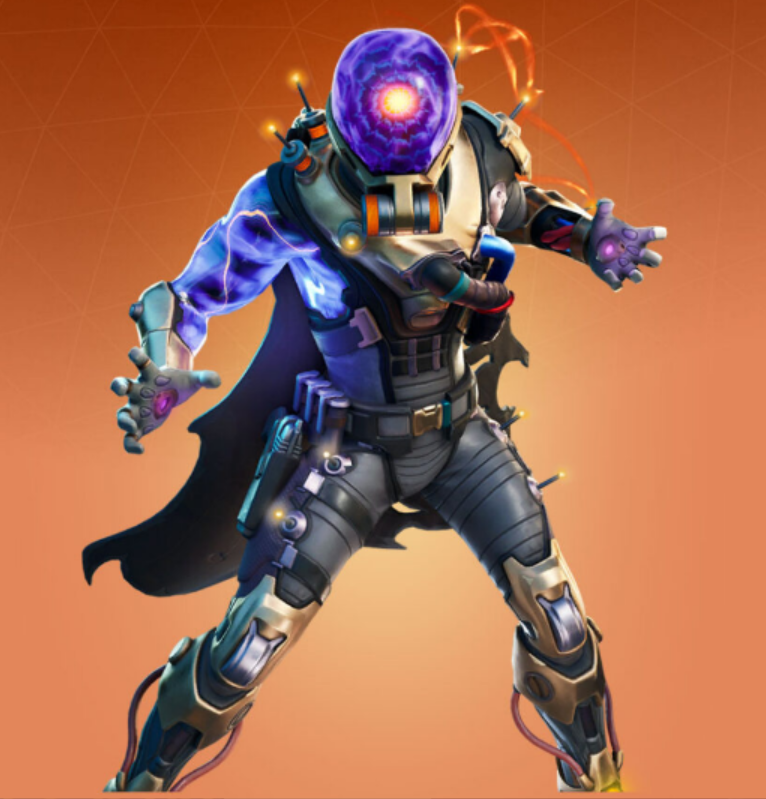 The Cyclo skin is a Legendary Fortnite Outfit that was released in Season 2 Chapter 2 and can be bought for 2,000 V-Bucks from the item shop. This outfit also comes with a cape which is a deal-breaker for us!

It gives off the perfect villain vibes and comes with universal powers. This outfit has bolts attached to it, electricity fizzling out of it, and a gun strapped to its leg. It has a huge mask on his head in the form of a glass globe which is purple in color with a yellow hole in the middle. 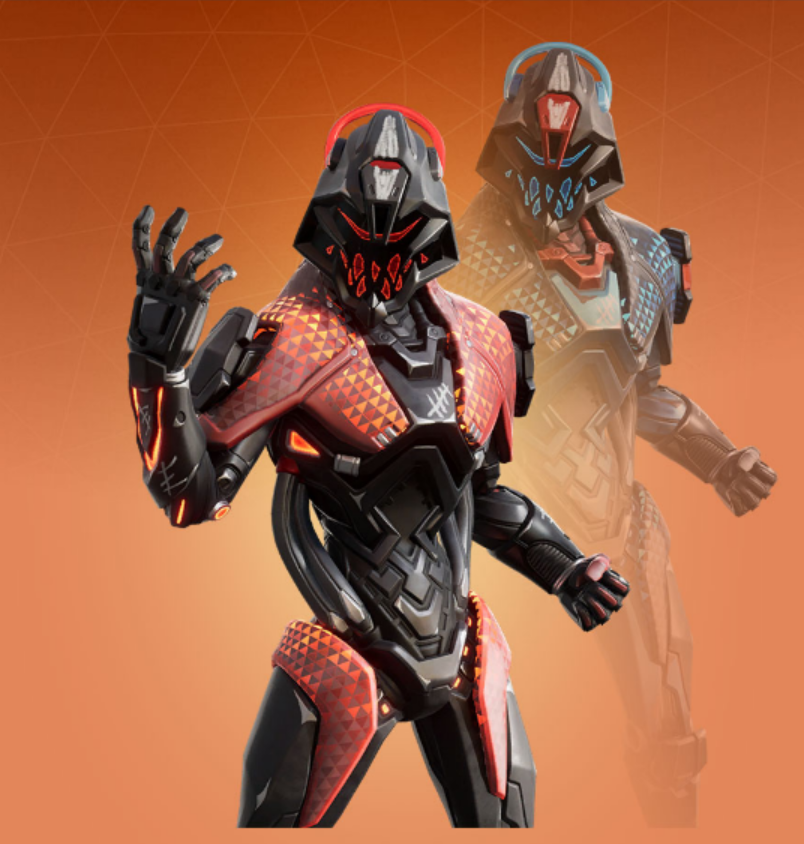 The Oppressor Skin was released in Season 10 Chapter 1 of Fortnite and is a part of the Domination Set. This specific skin can be bought for 2,000 V-Bucks from the Item shop in Fortnite. This skin gives off Darth Vader vibes from Star Wars.

Reign and destruction are the main objectives of this terrifying skin, and it will achieve it no matter what. This robotic skin is made up of a metalized alloy, making his armored impenetrable and designed to scare his enemies to death. 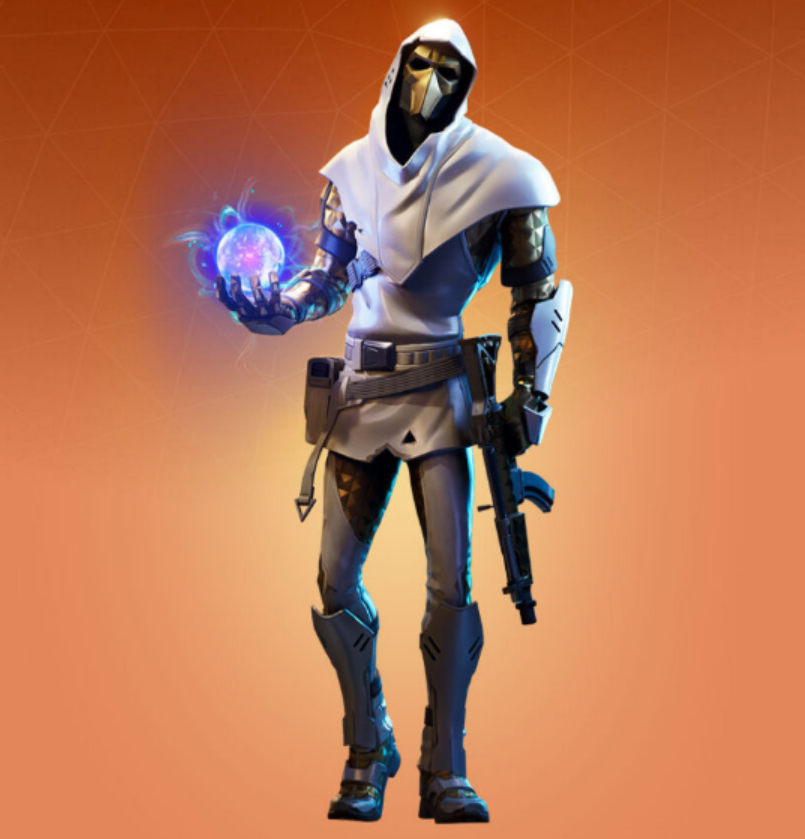 The Fusion Skin is a Legendary Fortnite Outfit that belongs to the Fusion Set. It was available via the Battle Pass during Season 11 and could be easily unlocked at Tier 11. Fusion is the latest and newest robotic skin, as it was recently released.

In case the season is still going on, you can buy it by viewing the Item shop or avail it by leveling up your Battle Pass. This skin has a mystical aura as if a robot from a different realm has entered our world. The different styles of this skin help it to stand out from the rest of the robotic skin.

This robot’s head is covered by a hood with a mask underneath, which helps to scare the opponents before killing them ruthlessly.

How To Refund Skins, Cosmetics, and Items in Fortnite (2023)
Of course, people make mistakes and some purchases can be unintended. This is why Epic Games has the best and most advanced refund system in any game, which lets you return items ...
31/05/2022

Is Fortnite Cross Platform?
The options can be in any form, from building to cover creation, there is almost everything going for players who just wish to play this game in their own way. Of course, that isn...
18/06/2022
Comments
No comments yet
Please login to leave a comment.
Login
Streams
Live
Streams
Live
Popular

How To Hide In A Giant Snowball In Fortnite