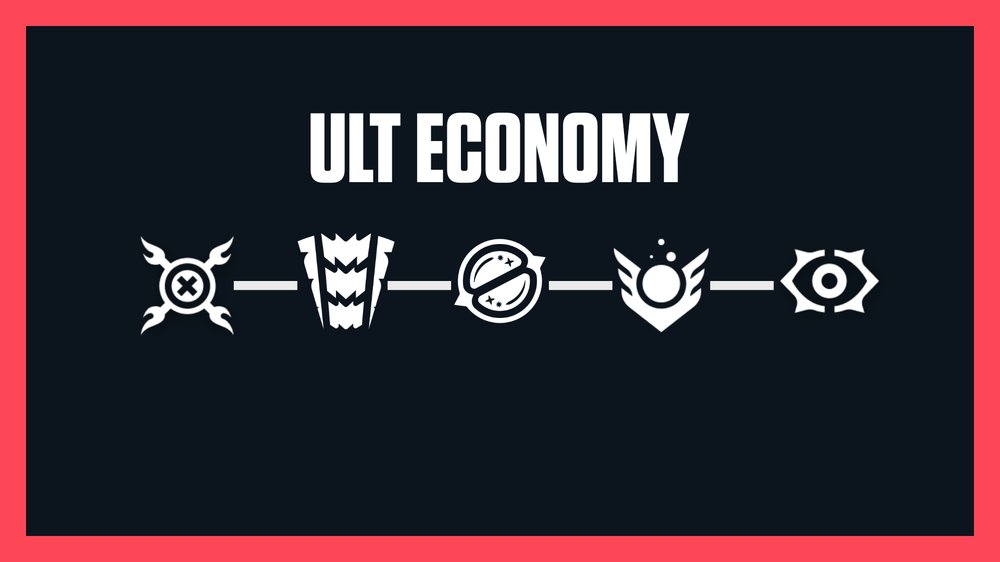 Managing your ultimate has always been a key feature of VALORANT on every level. Even in ranked you’re trying to get the ultimate of your agent online and use it to gain an advantage. This is even more important at the top level as teams have to really min-max how they use ultimates to find the most value. I’m going to explore how the top teams manage this economy and how you can apply it to your own games.

Firstly I want to give full credit to Anderzz. He was previously the head coach of Virtuoso, NA’s best unsigned team, and now he is working with FNATIC as their strategic coach. The framework I’ll use in this article is something he has talked about previously and you can watch his YouTube video about this topic here.

When we break them down there are 3 types of ultimate.

CONDITIONAL: Conditional in use

POWER: Unconditional in use, and potential round warping impact

Cypher’s ult is a good example of conditional as you need an opponent’s fresh body,

rolling thunder is an obvious power ult as it’s hugely round changing if it connects, and Skye’s seekers is an impact ult because you will always gain some information from it no matter what. Understanding these classifications will help us when it comes to creating a cycle.

To explain how to structure I will use an example team composition. This makes it less hypothetical and helps apply this framework more clearly. I have chosen Fire Flux’s Split, as it is a fairly straightforward example with clear roles and it's a composition I am particularly familiar with, as previous teams I have worked with have used it. They run Astra, Breach, Astra, Raze, and Cypher.

With these classifications in mind, we can create our ultimate economy cycle. This will be done in terms of positions 1-5, 1 having the most priority ultimate, and 5 being the least.

Position 1 here should be the Raze and this is our FARM ultimate. This means you must go out of the way to get this ability online and should be the top priority. I will discuss ways to make this happen later on. Showstopper is the star of the gameplan

Position 2 is Breach. The idea here is that rolling thunder is the strongest of the two power ultimates and our plan should be to snowball this so that it is available shortly after the first showstopper is used and a cycle can be established. However, since they do not have the farm priority that the Raze does, this should instead be done by things like spike plants and trading kills

effectively from the entries.

Position 3 here is the Astra and these now form the core of the plan. The main objective here is to fill the downtime between the higher positioned ults and plug the gap until another showstopper is ready. Between all 3 of our core ults, there should be very little downtime when properly managed.

Due to the unreliable nature of conditional ults, we cannot use them in our core cycle. As the resurrection is the more powerful of the conditional ults it will take priority. This ultimate should be available to fill any gaps that appear in the cycle and the res itself should be used with this ult cycle in mind; ideally resurrecting a player with an ult or the highest available priority agent as it will allow them to reach their ultimate even faster.

Finally is the Cypher. This is the absolute lowest of priorities, you SHOULD NOT be taking orbs or defuses unless you are the only one in a position to do so. This ultimate will be gained passively mostly through kills and deaths and is a luxury to have in rounds, but is too unreliable and low impact to rely upon.

Now the positions are understood we can see the structure of our ult economy as a whole on this map. 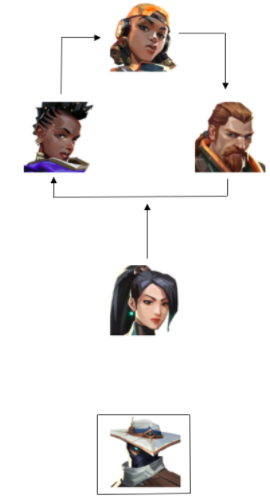 Hopefully now the cyclical structure we should aim for can be seen clearly. Raze at the top and position 2 and 3 form a cycle, with the position 4 sage supporting this. However, for success this must play out on the server and to do this, you have to enforce it on the server.

There are 4 ways to gain ult points. Regular kills and deaths, orbs, plants/defuses, and eco funnelling. Kills and deaths come naturally so there’s little to talk about here but the rest can be adjusted to fit the ult cycle.

Orb control and denial will form the basis of how to farm. Generally, on the attacker side, a smoke is good enough to secure an orb and very little needs to be invested to secure it. However, due to the deep positioning of the orbs, this is much harder on the defender side. To better control this, you have to change how you use other utility. A key example of this is the sage wall. Instead of the regular mid wall, you can use it to take orb control.

These very simple walls should be incorporated more at the start of the round to allow Raze to quickly grab the orb. Most of the time this will safely allow you to grab it and leave, as well as giving information if the opponents are nearby as they will try and shoot it. If all goes well and there's no opposition, then the wall essentially acts like a tripwire for the next 40 seconds, telling you if the opponents wish to take control of the area it is placed.

Whilst this is fairly obvious, I feel it is worth touching on. The defuse should always go to the highest priority agent, or someone lower down if they are much closer to their ult. Planting is similar, however, it’s likely that Raze cannot plant since they should be challenging for space. Therefore, it should either be the Breach or Astra planting depending on where you are in the cycle.

Eco funnelling is a little more controversial than the other things I’ve mentioned. It goes against the traditional idea that you shouldn’t push when you’re opponents are on eco. Instead, I suggest that you do push against an eco but do it cleverly with intent. Theoretically, you’re favoured in every fight so the Raze should push ideally with a supporting partner, like the Breach, who can invest utility to help them ego frag. Now, this is definitely risky sure and you have to trust that you can win the round even if you lose the guns but realistically, if the Raze pushes and gets one or two then dies, the round should still be winnable and they’ve made a lot of progress towards their ultimate.

This team composition is just one example and things will change as the composition changes, for example, a killjoy ult is a power ult and would be involved more heavily in the cycle. There are also compositions that will focus around a combination of ults instead of one farming ult. Hopefully, this guide has given you the tools to help you think about how to manage your ult economy better and it can help you whatever level you play at.

Understanding Icebox
Trying to understand VALORANT's most formulaic map and how top-level pros play it. I take a look at just how similar teams play Icebox by understanding the two most played composi...
02/09/2021
2010 Views

What's Raw Input Buffer In Valorant? And How to Enable!
Raw Input is a gaming input-related feature that has been around since the early days of CSGO. Allows users to play the game with natural mouse input. Direct mouse input is applie...
22/03/2022
1706 Views

Yoru Valorant Guide
An in-depth Yoru Valorant guide that will explain everything you need to know about the Agent and the best way to play with it. From his strengths to weaknesses you will find ever...
18/01/2022
1209 Views

The Best Spike Plant-Spots on Haven
Haven is one out of three original maps in VALORANT. It's a single map with three plant sites: A, B, and C. There are a lot of different plant-spots on Haven. Here you will find t...
06/10/2022
1876 Views

The Best Viper Walls and Smokes on Fracture
Viper is one of the best controllers in the game, and you can find a lot of value with her on Fracture. In this article, we will look at the best, and most used walls and smokes b...
17/03/2022
9954 Views
Comments
No comments yet
Please login to leave a comment.
Login
Matches
Live