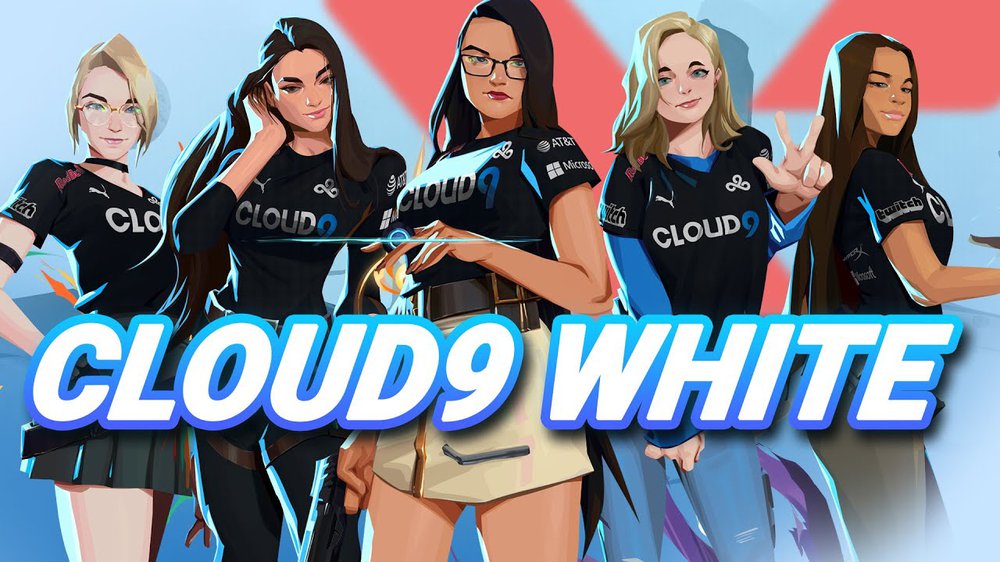 There can be no beating around the bush here. Cloud 9 white are incredibly dominant and have been for a long time. They’ve won every single major event in the female and marginalised gender scene and added Game Changers Series 3 to their trophy cabinet most recently, taking home $20,000 and bragging rights once again (trust me, they use them). You can read more about it here. So it's about time we dissect Cloud9 White’s gameplay and look at how they manage to always be on top. Choosing a map to break down is very difficult here because they seem to be so great on everything, however, I have chosen Bind. It’s one of their go-to picks, they have a 69% win rate here and are on an 11 game win streak.

They run Astra, Raze, Skye, Sova, and Viper. This is a very meta composition verging away from the most picked bind composition only by swapping out Jett for Raze. They adapted to this meta incredibly quickly, starting to use it all the way back in May.

Whilst this early adoption of this meta will have certainly helped, it’s truly their performance in the server that sets them apart so let's break it down. 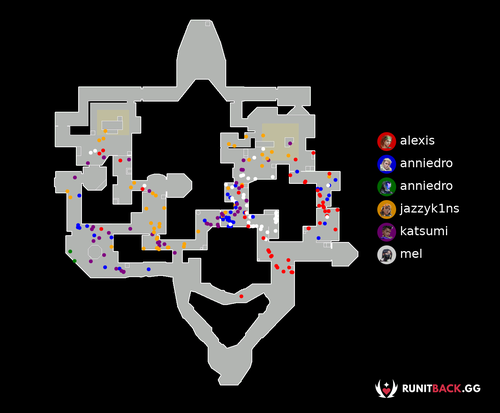 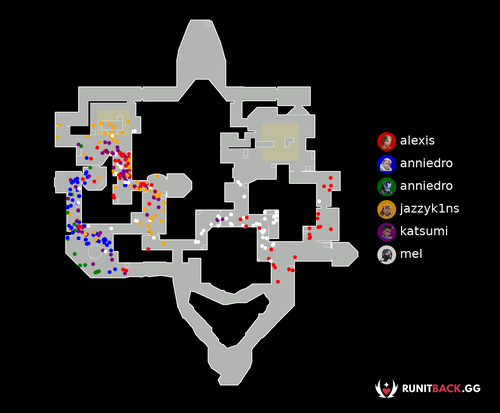 Just look at the sheer amount of dots high up the map either on-site or fighting aggressively for space. We see that Jazzyk1ns is very much the spear-tip of this javelin throw. When going B she is the first on-site finding a duel and A she’s also looking for the entry. We also see this reflected in their plant speed. 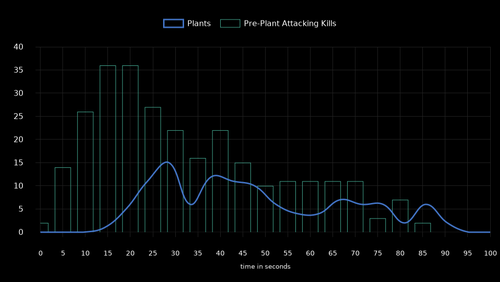 We can see from this graph just how aggressive they are. We see how a huge amount of their kills come in the first 30 seconds of the round as well as the blue line being downward trending, showing us a preference for early plants also.

Breaking this down further we see slight favouritism of the B site planting their 55.88% of the time but this is not enough to become predictable. Typically, we see Cloud9 White try to look for an early fight or early space then look to capitalise on that. If that makes an execute possible then they go for it, and if not, they can hold their position and force the defenders to try to make plays for information and then punish them for overstepping.

We also see that their aggression is well backed up. They burst control of a site but are also very strong in the post-plant. They have post-plant win percentages of 82% and 71% on A and B site respectively.

These are the post-plant positions for the first 20 seconds after a plant per site. 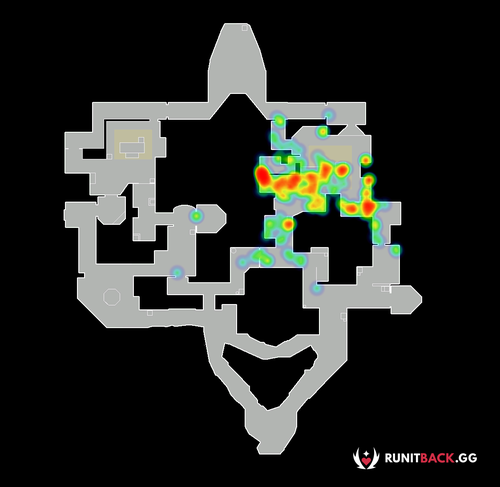 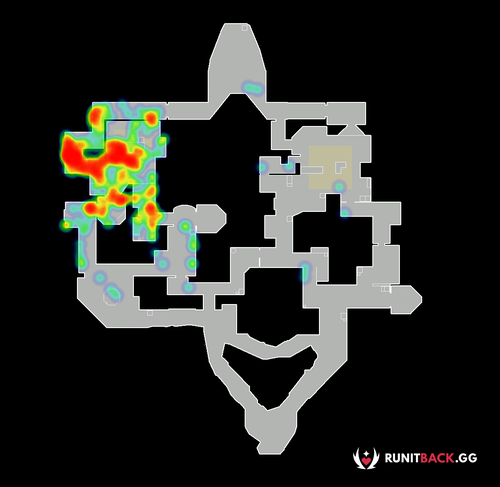 As is in line with their composition we see them hold onto key areas of space (Mainly lamps on A and elbow on B). They position themselves to let their stall heroes play for a firmer post-plant whilst also enabling the raze to challenge for key areas during the retake to slow the defenders.

My favourite player to watch is meL. She’s a high power, top fragger, big-brain IGL. In the server, she has the most freedom with lurks and uses her kit accordingly. Here are the 2 most common Viper setups she uses. 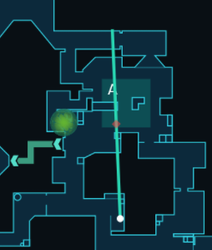 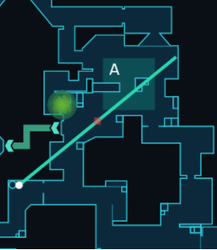 Both are designed to deny information and allow for pop flashes from the Skye. Repeatedly on B plays she used the first set up and will sneak her way into lamps becoming a real headache for rotating defenders. The second wall also allows for a sneaky walk onto the site if they have showers control and it’s just a nightmare for defenders to play around.

Cloud9 White truly are a juggernaut. They dropped one map the whole of Game Changers and it’s easy to see why. They’re a core of players who have been together an extremely long time and their chemistry is palpable. They all clearly love playing in the team together and it translates on the server. This is all backed by near-flawless execution and coordinated strategies. Cloud9 White are the best and they know it. I absolutely love them for their confidence and excellent gameplay and can’t wait to see them continue their reign of terror and make some deep runs in upcoming VCT events.

How Many People Play VALORANT In December 2022
Wondering about the number of people playing Valorant in December 2022? Check out this article where we enlighten you with this information!
18/12/2022

How to Convert Your Sensitivity to Valorant from CSGO, Overwatch, Warzone, and more!
In this article, we’ll be covering on how you can convert your sensitivity from Valorant to games such as Counter Strike Global Offensive, PUBG, Call of Duty Warzone, Rainbow Six ...
22/03/2022

How Gambit Qualified for Berlin
Taking a specific, focused look at how Gambit managed to beat Team Liquid in their final qualifying series for Berlin. Specifically looking at map 2 on Bind. I explore their compo...
07/09/2021

yay: Valorant Settings, Crosshair & Gear (2023)
Jaccob "yay" Whiteaker is considered by many the best Valorant player in the world currently. El Diablo is known for being one of the best Jett and Chamber in the world. In this ...
14/05/2022
Comments
No comments yet
Please login to leave a comment.
Login
Matches
Upcoming