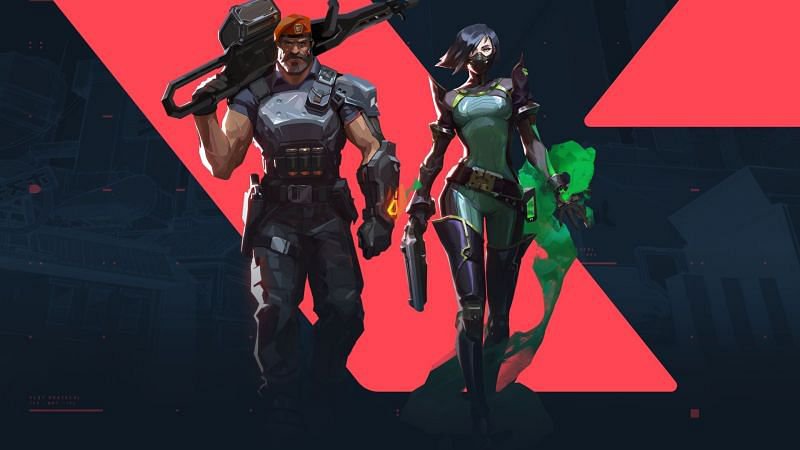 Welcome back to this series where I break down each of the most common roles used in competitive VALORANT. A good team needs to have strong players in every position and particularly players who understand their role well.

While some of these positions are open to interpretation and you may not see players fit exactly into a category. Today we’re looking at one role that is very clear cut.

It’s time to cover the controller. Unless you’re Team Liquid at the BLAST invitational, this role is pretty crucial.

Now, this is something Riot got exactly right. The controller section of the agents in the game is exactly what we see the professional controller players play. These are of course: Astra, Brimstone, Omen, and Viper. The key thing that makes an agent a controller is the ability to cut off sightlines. We see this in the form of “Smokes” on all 4 agents, as well as Viper having her own toxic screen.

This agent section is actually going to be the most important section as all 4 options are very different. A great controller player will understand all 4, but they excel in different situations so let’s go through it.

Let’s start with Astra. Out of the 4 she had the highest pick rate at Masters 3 with 61.72%. This is deceptively low however as if we exclude maps where she wasn’t picked at all, she has an 83.80% pick rate. She was the most played smoker on every map but Icebox and Breeze so she is clearly the top choice. Astra is succeeding right now because of how well she fits the meta. We see teams have a big focus on utility and “mid-range compositions”. They’re built around being able to ineffectively trade utility to control space. Astra provides by far the most flexibility in terms of what she can offer for the team, so why choose the alternatives? When it comes to playing her, she is the most difficult to use. It takes a lot of understanding to know where and when to pull and stun and to actually trap opponents with the utility. There is also a wealth of ability combinations to master here. The pull is lethal combined with any AoE damage such as raze grenade or shock darts. 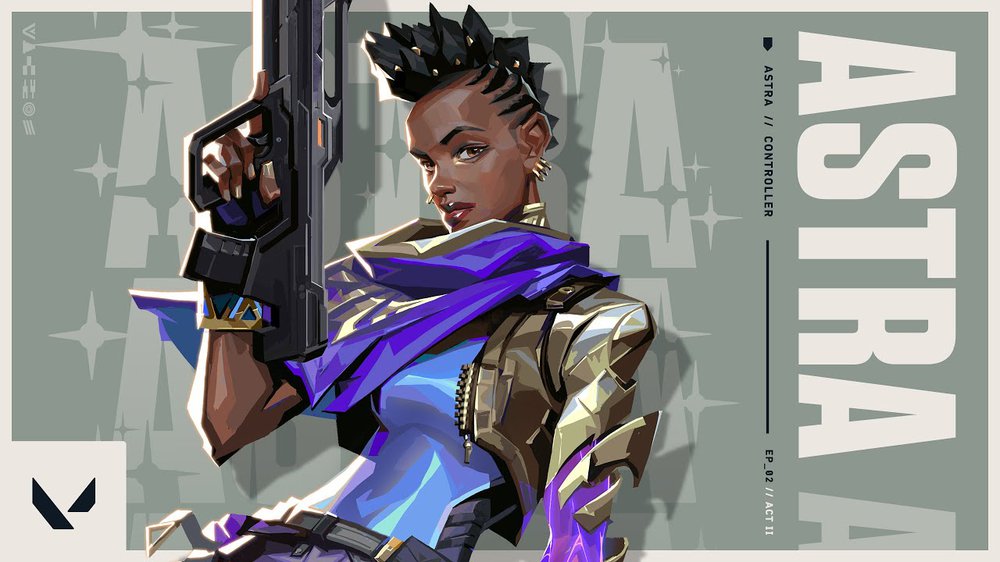 Next is Viper coming in with a 49.22% pick rate at masters 3. This is slightly inflated because of her use as a sentinel on Bind. However, for controller players, Viper is not an optional extra as she had a 100% pick rate on Breeze and Icebox. She is realistically the only choice due to the size of these maps. There are lots of wide angles that are important to cut off and regular smokes won’t do, Viper’s toxic screen is the only way to do this consistently. The problem with Viper is that she sorely lacks flexibility, once the wall is placed it cannot be moved, so it is important that you and your team are familiar executing both with and without the wall in order to be able to fake effectively from it.

Omen was the third most popular choice of controller but way behind the top two at just 7.81%. He saw the most play on Haven and Ascent, the mid-sized maps. This is always instead of Astra as finds less value due to the fact there are fewer tight spaces where the pull and stun are more effective. We typically see Omen being picked up by the more aggressive controller players who prefer to play more for themself than just supporting teammates. The key part of Omen’s utility is his flash. Mastering this is ability is key to be a successful Omen player. It’s also important to be creative with your TP’s as if done right they can confuse opponents even at the top level.

Finally, we have the black sheep of the controller family. Brimstone. Unfortunately, he sees even less play than Omen at 5.47%. The only time he is brought out, aside from a few one-off niche picks, is on Bind. He is naturally the most aggressive controller and is best suited to being with his team running executes, and Bind is the only map where this is consistently feasible. I have a more in-depth guide about how the pros are using Brimstone and you can check this out here.

Now to look at how to play the controllers. It goes without saying this definitely varies greatly depending on who you play, but there are some key similarities I’ll go over.

Firstly and most obviously, PLACE YOUR SMOKES. I know this sounds very very stupid but it’s easy to get caught up doing something else when you should be smoking. Don’t hold the flank and take a duel as your team are pushing onto the site for example. Most likely only you can block off those crucial angles so you have to be ready to do it every round. The same goes for if you’re defaulting or away from your team, if people across the map need smokes you have to be ready to help them straight away. Often you have to be the one to bail your teammates out of bad positions by smoking key angles so you can never be too busy to help them.

Another potentially obvious tip is to learn how to smoke properly. For many this is common knowledge but if not this commonly used sketch explains the basics. 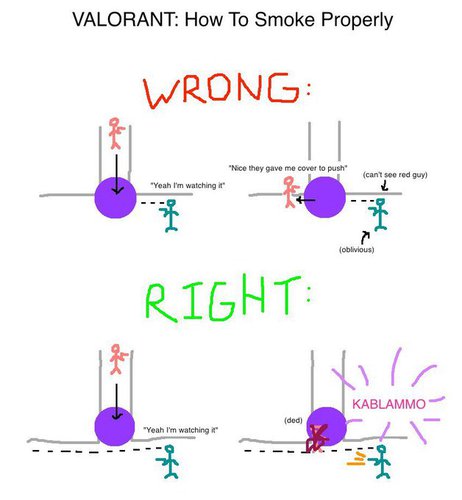 It is important to place the smokes snug into the angle so that if they peek through the smoke they are exposed to every angle. Of course, the reverse is true if you’re trying to get out into an area, you can place the majority of the smoke on the other side of the doorway to give yourself more space to work with.

Next, don’t be afraid to use one-way smokes. For me learning an understanding oneway smokes is the key to levelling up your controller game. The problem with a traditional smoke is that opponents can stand all the way up inside them and pop-flash out, instantly blinding everyone holding the angle. One-way smoke makes this much harder to do and are typically much better at deterring a push than regular flat to the ground smokes.

You’re also a great candidate for being a lurker (apart from Brimstone). Astra and Omen can smoke globally so there’s no direct reason why you have to be hidden behind your buddies so take full advantage of this especially if no one on your team is doing this already.

Finally, let’s look at who to study if you’re looking to improve your skills on this role. As always, this depends on your own style and agent choices. For Astra, I would recommend AvovA. He’s been a standout player on this role for a while and is one of the best at Astra in particular. If you want to lean towards lurking more there is of course DavidP. He’s an Omen fan normally but has experience on every controller and has turned lurking into a fine art. One thing to note is that the controller role is very commonly held by IGL’s so take that into consideration when deciding who to watch. 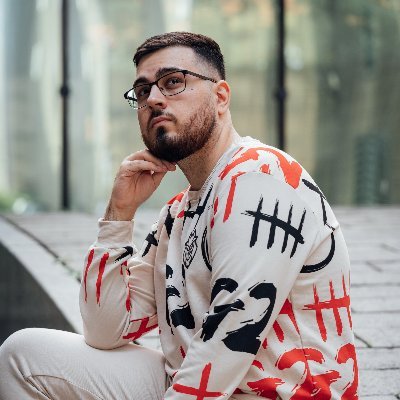 Controller players are the cockroaches of the game BUT IN A GOOD WAY! No matter what nuclear winter Riot bring in terms of buffs and nerfs they’ll always survive, a duelist-less or sentinel-less meta is not impossible at some point in time but I struggle to see the meta ever evolving past the need for controllers. You’ll always be in demand at every level (and especially so in ranked).

The best controllers are consistent and reliable and ultimately pretty selfless. The controller role is one of the easiest to learn but one of the hardest to master as all 4 unique agents provide different challenges. You should be ready to put in a lot of work that will be under appreciated. It’s rare to hear casters say “Oh what a great smoke he just placed there”, but this doesn’t mean it should be overlooked. The controller player is the beating heart of every team, always there and always predictably helpful.

Valorant Keeps Crashing - How To Fix Guide (2022)
It is possible for a game to not work correctly on your PC for many reasons. Your graphics card may not be compatible or may have an incompatibility issue. The downside is that if...
27/04/2022
2189 Views

When to Save and Spend Credits in VALORANT
Skills will properly manage your credits during the match, and can help you win the game. This guide will help you to achieve high results in ranked matches in VALORANT.
29/05/2022
878 Views

How to Contact Valorant Riot Support - Create Support Ticket
Riot Games is a company that has a solid base for users. Considering that they have been running League of legends for over 11 years now, there’s a good foundation for addressing ...
02/02/2022
2289 Views

Tracker.gg vs Dak.gg vs Blitz.gg - Best Valorant Trackers (2022)
In this article, we’ll be looking at some of the best VALORANT stats trackers in the scene, and weigh their perks and disadvantages.
03/12/2021
7467 Views
Comments
No comments yet
Please login to leave a comment.
Login
Matches
Live