Should You Use the Vandal or Phantom in VALORANT? 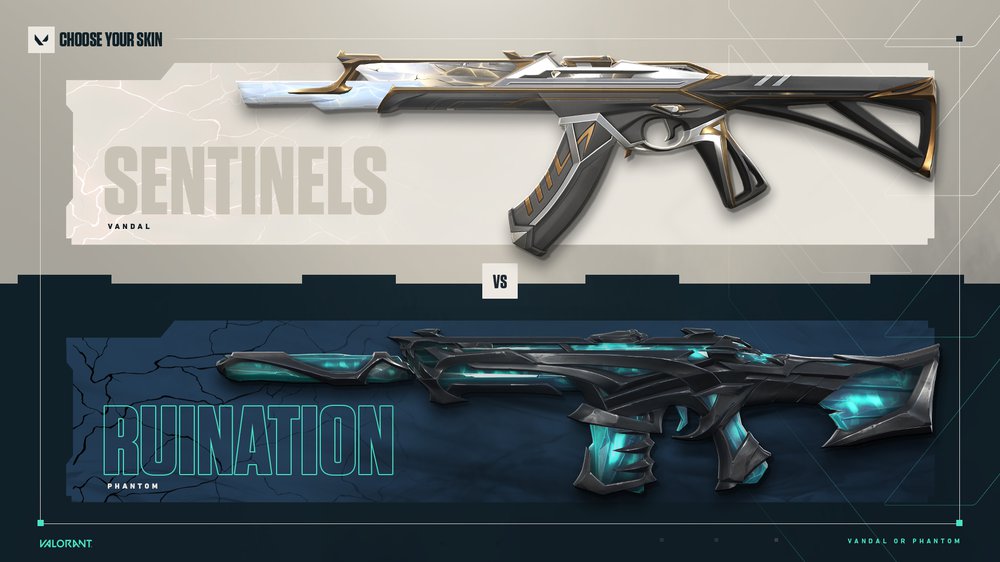 Since the inception of VALORANT, players have been fiercely debating about the two main rifles of the game: the Vandal and the Phantom. It’s a question that has divided the community for a while. Both sides have their fair share of defenders, eager to prove that their gun is the better gun.

In this article, we’ll try and settle this big debate once and for all. Should you use the Vandal or the Phantom in your ranked VALORANT games?

Before we dive into what everyone is saying about the Vandal and the Phantom, let’s first look at the numbers. Here are the stats of the two guns.

The Phantom is the first fully automatic rifle we’ll discuss in this article. It costs 2900 credits and has 30 bullets per magazine for a total of 90 bullets.

Out of all the rifles in VALORANT, the Phantom has the highest fire rate out of the fire, sporting 11 rounds per second fire rate. However, compared to the Vandal, the Phantom has a damage falloff, as seen above.

The Vandal, on the other hand, functions slightly differently from the Phantom. Like its counterpart, it’s also a fully automatic rifle. It has 25 bullets per magazine for a total of 75 bullets. The Vandal’s fire rate is significantly slower than the Phantom, at 9.75 rounds per second. However, it makes up for it with raw damage.

The Vandal doesn’t have any damage falloff and has the second-highest damage output out of all the rifles in VALORANT.

The Argument for the Vandal: ONE-TAPS

If you’ve played any version of Counter-Strike, you might see some parallels to the age-old AK47 vs. M4A1 debate.

The argument is that pros prefer the AK because of its ability to kill instantly with a headshot despite having armor.

And yes, that’s also the same reason Vandal supremacists argue for their gun in VALORANT. The ability to kill someone instantly is the most important thing in a first-person shooter game.

Guides always tell you to aim for the head for a reason: it deals the most damage. Dealing with an insta-kill headshot is the easiest way to win aim duels.

The Argument for the Phantom: Ease of use

Sticking to the Counter-Strike analogies, you’d think that the AK/Vandal argument would automatically make it superior to the Phantom. After all, you see CS pros trade-off their M4 for an AK as soon as they can, it would make sense for the same thing to happen in VALORANT.

However, the Phantom brings more to the table than the M4s. For starters, the Phantom has the same one-tap potential in close-range duels.

Also, superior fire rate and less messy spread on the spray make the Phantom an easier gun to use than the Vandal in VALORANT.

What do the pros have to say about this?

As with most things, VALORANT pros are divided about this topic. Most people came into the game thinking that the Vandal is superior to the Phantom: who can resist that juicy-ass one-taps? Most people up to this day still pick the Vandal in their VALORANT ranked games. 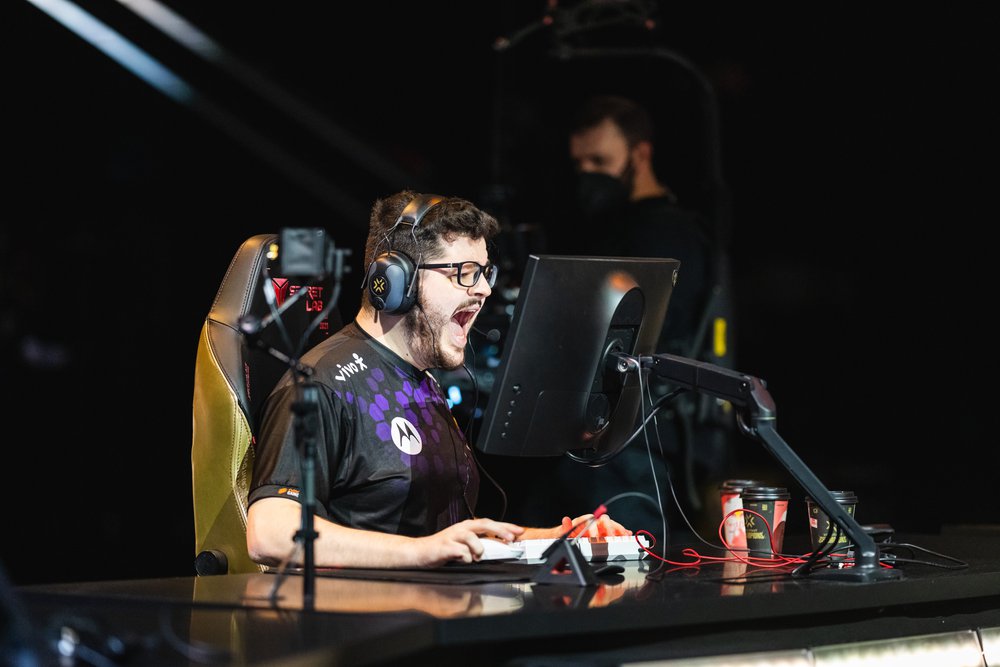 However, one of the best players in the world made a shocking statement that made people rethink their thoughts on the Vandal and Phantom debate. TenZ, the ace fragger of Sentinels, came out and said that the Phantom, not the Vandal, is the better gun.

"I'm actually not joking when I say that the Phantom is so much better than Vandal. The only thing the Vandal can do is one-tap, but the Phantom – bigger clip, easier spray pattern, one-hit at close range anyways, one-hits medium armor at all ranges. There are so many more reasons the Phantom's better."

When you stop and think about it, TenZ really does have a point. In terms of raw stats, the only advantage that the Vandal truly has is its damage. In nearly every other aspect, the Phantom edges out the Vandal in VALORANT.

If TenZ is right, though… why is it that the pros still use the Vandal just as much as the Phantom? u/Ominous___ posted on the VALORANT Competitive Subreddit a graph of some of the pro’s most preferred guns. If you notice, you’ll see that most of these guys, use both guns equally. 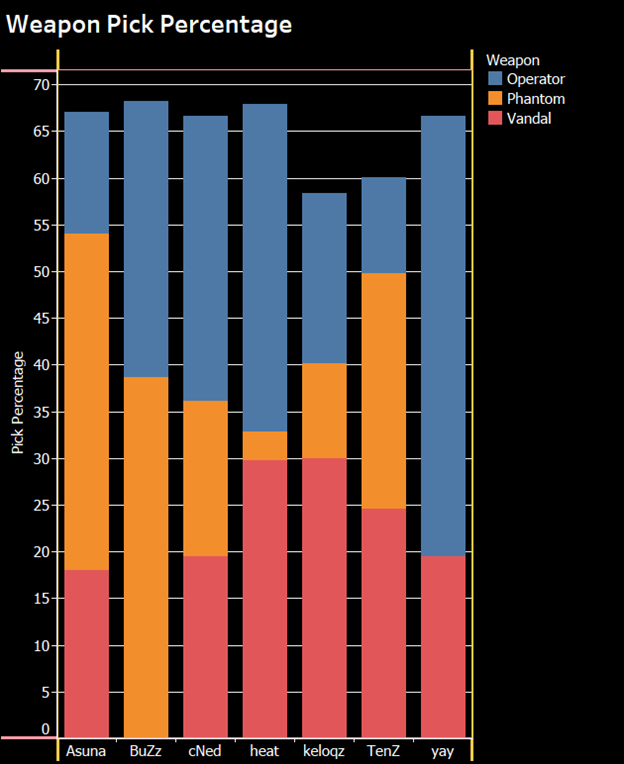 "If I know I can't afford armor, I'm probably gonna buy a Vandal. If I'm playing with a lot of smoke agents I'll buy a Phantom."

Smokes are an easy way to deal some free damage without getting seen by the enemy team. While the Vandal can get you a lucky headshot, you’re likely going to get traded instantly because they’ll see your tracers.

The Phantom allows you to spray through the smoke more, and without being detected as well. On the other hand, if you’re in a buy round and you can’t afford to have armor, buying a Vandal and trusting your aim with a one-tap is the best option.

As with most debates, the truth about the VALORANT Vandal vs. Phantom debates lies in between the two extremes. Both guns have their pros and cons: it’s up to you to decide what to use at the moment.

As a general rule of thumb, if you’re going to be taking long-range duels, use the Vandal. Otherwise, use the Phantom.

Good luck, and go destroy some fools with your newfound knowledge!

A Look at Fracture
I take a glance at the new map, Fracture, and try to break down the potential meta's and agent picks I could see forming once the map is allowed into professional play.
13/09/2021
851 Views

Keys to the Game: SMB vs Acend
Ahead of the first games of Masters 2 Berlin, I look at one of the first matchup's we'll see, Acend vs SuperMassive Blaze. I explore the key win conditions for both teams and the ...
09/09/2021
1692 Views

How to Remake In Valorant Guide
In this guide, you will know how to remake the match in Valorant. This will help you in case your teammate left the game too early, and also, most likely, will save you from defea...
27/11/2021
971 Views

VALORANT: How Do the Pros Play Killjoy?
Take a look at how the top players are using Killjoy, we break down pick rates, how she fits the meta and more!
22/12/2021
2206 Views

What does OP, FF, MB and RIP mean in Valorant?
These terms players use very often. They help to give a quick and clear assessment of the situation that occurred in the round or in the whole game.
27/03/2022
2271 Views
Comments
No comments yet
Please login to leave a comment.
Login
Matches
Live