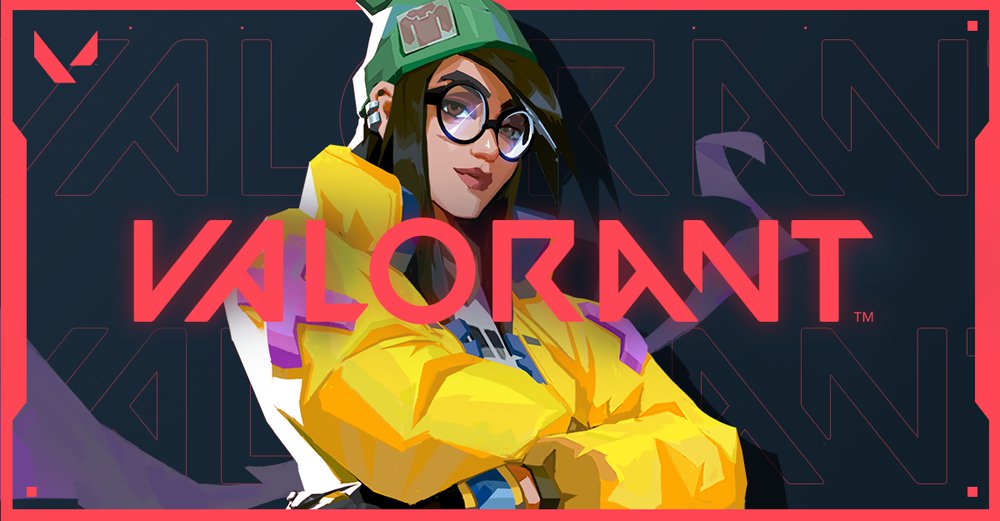 Killjoy Is one of the four available Sentinels in the game. She was the first character to be added to the game after its initial launch. In order to play with Killjoy, you will first have to unlock her.

Her abilities allow players to shine on the defensive side of the map. You can also find value in playing Killjoy in almost all the maps in the game. Making the Agent one you should try to learn especially if you have more of a defensive and supportive playstyle.

Sentinels' abilities make it so they are Agents focused on the defensive aspect of the game. Supporting their team by defending bomb sites alone, and gaining intel that facilitates the rest of the team decisions or actions. These are things Sentinels excel on. 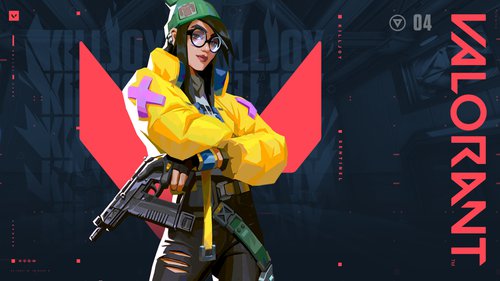 When used in an optimal way Killjoy can close a bomb site just with the use of her abilities. Her abilities make her one of the best Agents to play alone in a bomb site or specific area of the map.

So let's take a deep dive into Killjoy's abilities.

An in-depth look at Killjoy abilities

Killjoy's abilities are great to slow enemies down and close a bombsite. Making the opponent think twice before attacking the bombsite Killjoy is defending. 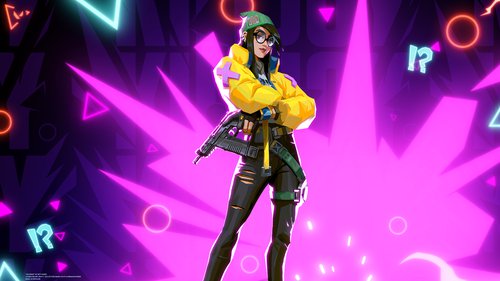 Her ultimate is also great to play retake or force the enemies out of some areas of the map.

Killjoy equips a grenade and she throws it/places it in an area of the map. The Nanoswarm goes covert, meaning you can only see the grenade when you are really close to it.

The Nanoswarm has to be activated by Killjoy. When that happens the ability deals damage in a certain area. A lot of players use this ability in order to slow or even stop the enemies from advancing in a certain part of the map. 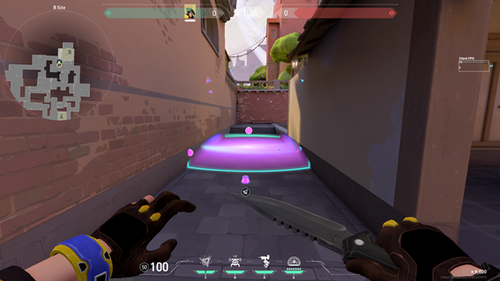 If the enemies try to pass through the grenades while they are active they will either die or stay at very low health. You can also play post-plant with this ability. By placing your grenades on the ground near the bomb or throwing them to the bomb area. Then you active the Nanoswarm and the players will need to wait for it to end in order to defuse. Otherwise, they will either die to the grenade's damage, or to you or your teammates, if you pick them while they are sticking the defuse.

You can also use Nanoswarm to clear choke points or force players out of a close area of the map. This is especially useful on the attacking side.

Note that all of Killjoy's abilities are activated while she stays within a certain distance from them. IF your abilities are on bombsite A, and you go to B they will stop working since you will be out of the activation area.

When you get back to the area they will immediately activate if they haven't been destroyed yet.

The Alarmbot is one of the two abilities Killjoy has with the purpose of gathering intel. You place the Alarmbot in an area of the map, and he will warn you when an enemy gets in its range.

This allows you to get info, and control of some areas of the map without having to expose yourself and risking getting killed. Enemies can destroy the Alarmbot with damage from weapons or abilities. But they will only get to see the bot once they are really close to it. However, they can destroy it without seeing it. 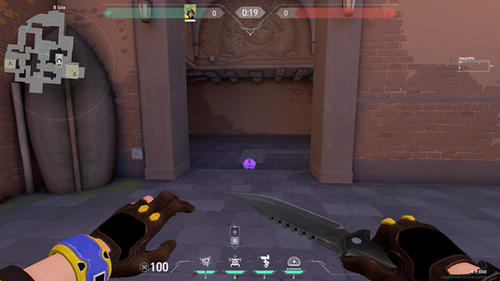 When destroyed the Alarmbot warns Killjoy. Meaning that there is someone close to that area of the map. This gives information for you and your team to play with.

Once you deploy the bot it stays indefinitely, unless it's destroyed or you call it back. When calling it back you will have to wait 20 seconds in order to redeploy the Alarmbot.

Just like the Alarmbot, this ability's main purpose is to take intel and help you control/defend one part of the map.

You place a Turrent in a specific part of the map. It can be on the ground, on top of some boxes, there are many places where you can deploy it. 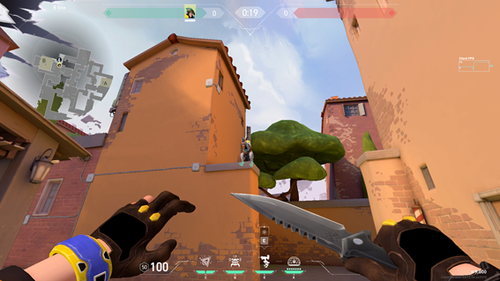 While active the Turrent scans the area in front of it in a 180 degrees cone. When it detects an enemy agent it will start to fire at him. Her shots will not only damage the enemy but also slow him down.

This ability allows Killjoy to play in a more safe position, not exposing herself to enemy fire. While at the same time she is gathering intel on the enemy team.

This also slows the opposing squad executions since they will have to destroy the Turrent. Giving more time for Killjoy'ss team to rotate to help her. Or for Killjoy itself to change positions.

Killjoy ultimate when well used can be one of the best in the game. However, there are also a lot of ways to counter her ult. This means her ultimate isn't as strong as some other Agents' ultimates.

You place the Lockdown in an area of the map activating the ultimate. When active a blue area will show on your mini-map. The enemy players that stay in that area when the ultimate ends will all be detained. Meaning they will be slowed down and won't be able to use any of their weapons or abilities during

This ultimate can be easily countered because while the ultimate doesn't end the enemies have 13 seconds to get out of the area. You can also destroy her ultimate. Brimstone ultimate, Raze ultimate, Sova Ultimate will all destroy Lockdown. Using grenades or weapons is also another way to destroy the ultimate. 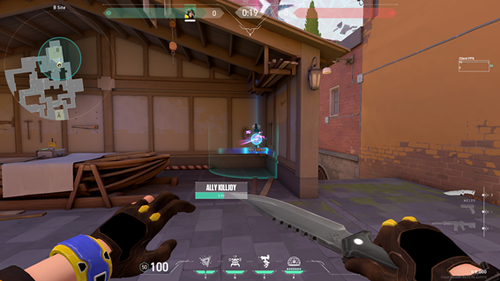 So you have to be careful when you use this ultimate. There are certain situations where the ultimate can be very useful. However, if it's placed in an open position or your enemies know how to counter it, it becomes basically useless.

Some of the situations where you can find value one this ultimate are when playing retake. Since it forces the enemy team to either leave the site or stay in a closed area of the map.

When execution in a bombsite. If you want to go A you can use Killjoy ultimate to force the enemy out of the bombsite while you can take control of that area almost unopposed.

How you should Play with Killjoy

Killjoys is a very defensive Agent. Her kit makes it perfect to anchor one bombsite. In defense, you want to play alone on one of the bombsites and use your "setups", "setups" mean the combined use of all her abilities in different positions on one part of the map. This makes it very difficult for the opponents to attack your bombsite and lets your team strength the rest of the map.

The enemy squad will normally try to evict the bombsite Killjoy is in since they know it's much harder to enter. You should switch the places where you place your abilities, this way it becomes unpredictable and even harder for the opponents. 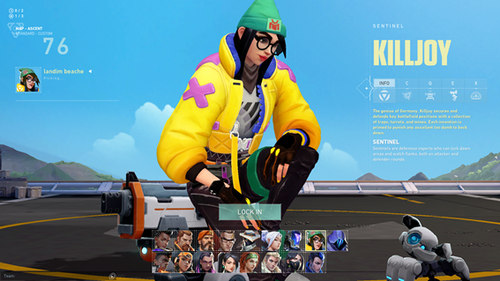 Let your Alarmbot and Turrent spot the enemy and play a much more defensive style. Don't over-pick, play around your abilities and force the enemies to come to you and play towards your hands.

On the attacking side, you won't be as useful. However, you can still help your team. Leaving the Turrent in a place where she can gain intel to your team, like if someone is pushing.

The Nanoswarm can be used to force players out of some parts of the map, and clean difficult access areas. As mentioned above you can also use your ultimate to execute into a bombsite.

Killjoy is also very strong in the post-plant because of her grenades as mentioned previously in the article. So playing post-plant with Killjoy using your abilities to make it harder for the enemies to retake is also one of the ways you can be useful for your team on the attacking side.

On the defensive side, Killjoy is a well-rounded Agent as you could ask for. However, you have to be careful about where you place her abilities. If you place them in the same place for many rounds in a row smart players will adapt to it, and will also know how to counter it.

So try to always change your setups, and place your abilities in areas difficult for the opponent to destroy without being spotted or triggering the abilities.

The attacking side is where Killjoys struggle the most. You don't have an attacking kit. Your whole abilities are made to shine on the defensive side so it's normal for you to struggle when it comes to the attacking side.

So the main tip I can give you is to be patient. Use your abilities to take information around the map for your team. Use tour Turrent to spot enemies or watch the flanks. Clear choke points or other areas where the enemies can be with your Nanosarwm. You can also use your ultimate to make it easier to take control of a bombsite. Playing for the post-plant is also probably Killjoy's best strength on the attacking half to use that to your advantage.

Killjoy is one of the best sentinels and defensive Agents in the game. If you have a more defensive playstyle you should definitely try her.

You will get used to the Agent in a couple of games. She is useful in almost every map, which means you will benefit a lot by knowing how to play with her since you can use her in a lot of different comps and maps.

For a more advanced information take a look at our guide How the Pros play Killjoy.

I hope this guide helped you understand how you should utilize Killjoy. Her strengths, weaknesses, and how you can find the most value with her abilities in the attacking and defensive side.

What's Raw Input Buffer In Valorant? And How to Enable!
Raw Input is a gaming input-related feature that has been around since the early days of CSGO. Allows users to play the game with natural mouse input. Direct mouse input is applie...
22/03/2022
1705 Views

The Best Viper Lineups on Fracture
Viper is one of the best controllers in the game, and on Fracture you can find a lot of value with her both in competitive play and Ranked. In this article, we will look at the be...
30/07/2022
2487 Views

Omen Valorant Guide
An in-depth Omen Valorant guide that will explain everything you need to know about the Agent and the best way to play with it. From his strengths to weaknesses you will find ever...
12/01/2022
1420 Views

VALORANT Icebox Map Guide
Take a look at how to play Icebox, one of VALORANT's most controversial maps
07/02/2022
2667 Views

Valorant Breeze Map Callouts Guide (with images)
In this article, we will guide you throw all the callouts on Breeze. From the basic callouts to the more detailed ones.
24/02/2022
3633 Views
Comments
No comments yet
Please login to leave a comment.
Login
Matches
Live