VALORANT: How Do the Pros Play Killjoy? 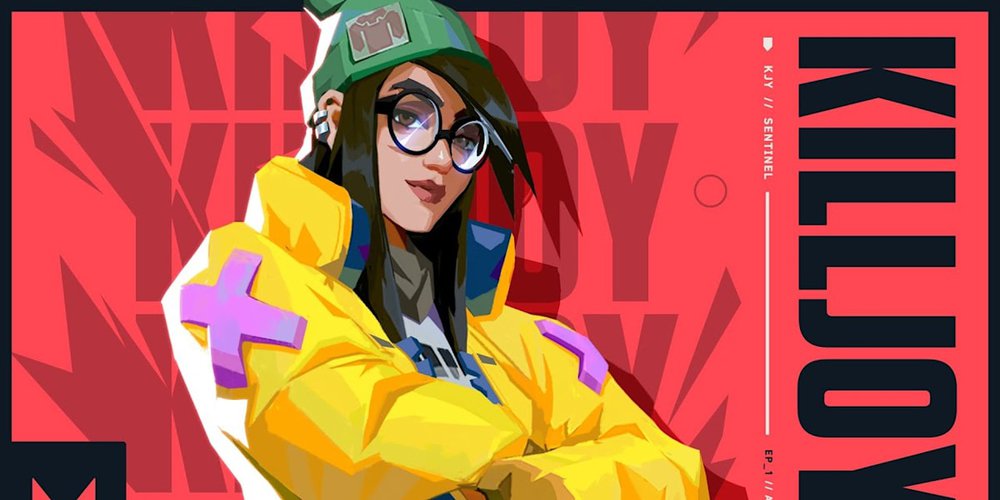 Next up in my series of guides is Killjoy. Let’s explore how the pros use her in more detail. If you’re more new to the game you can also check out our beginners guide. Killjoy is a common pick exclusive to the sentinel position, competing against Cypher and Viper. Let’s see how she stacked up at champions.

We can see that she was played by top-level pros on every single map, with a drop on Bind (due to the huge amount of Viper), and spikes on Ascent and Haven. 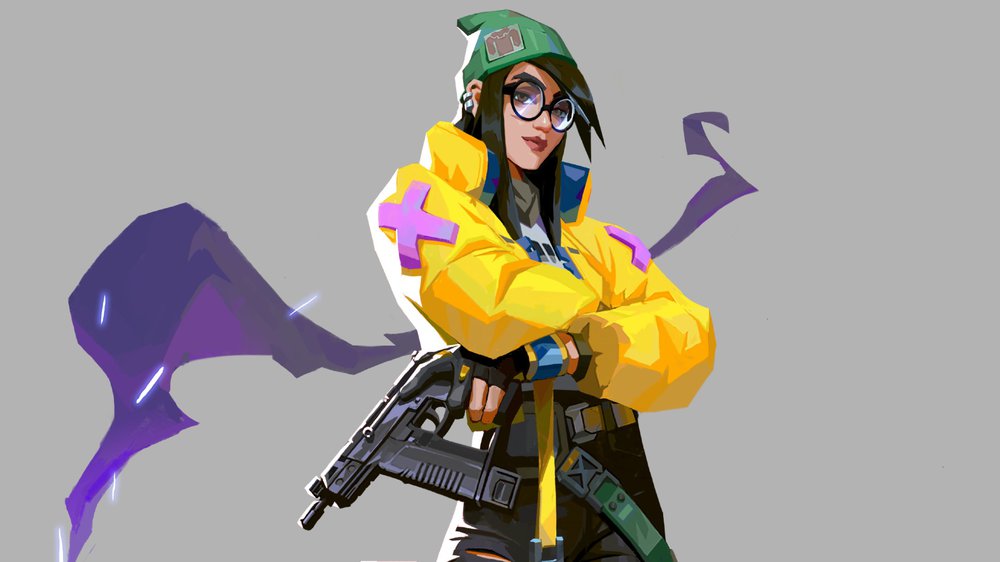 How Does She Fit The Meta?

As I said before she competes for the sentinel role, so to examine her place in the meta, we need to see how she compares to the other agents looking for that sentinel slot too. On the defensive side, Killjoy excels at creating deadly traps while Viper is more focused on stalling and Cypher is more focused on info.

This is not to downplay her ability to both stall and gather info because she can still do both quite well. We’ll typically see the alarmbot placed in an unguarded lane whilst the rest of her kit will be put towards a set-up to help hold a site.

When attacking we normally see utility used to hold the flank much like cypher does, even though she slightly loses out here as she has to stay in range of her kit as well as there being a lot of work arounds, like smoking the turret.

Overall, the sentinel pool is well balanced right now on most maps so a lot of it can come down to the player and teams preference, but I will say she certainly can bring more to an execute than the others and this does partially help her pickrate. 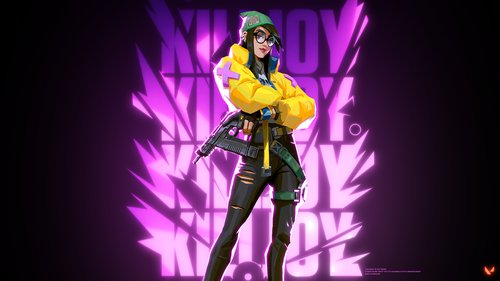 NANOSWARM: This ability is a remotely activated molly and this is what makes her trap set-ups incredibly potent. Not only do they deal a fair amount of damage, but they can also be activated from anywhere on the map. It’s important to note that the damage from these don’t stack so it’s always better to cover a wider area with the two than place them on top of each other. Even though they are remotely activated it’s still important to learn lineups, as more skilled opponents will use utility like a shock dart to clear potentially trapped areas.

ALARMBOT: Killjoy’s alarmbot is a defensively-minded piece of utility designed for holding a certain bit of space. Typical it’s used in one of two ways: 1) As part of a trap set-up combined with her nanoswarm’s as info to know when to activate them and make the enemies vulnerable. Or 2) place it in a separate lane, to gather information and trigger rotates. Typical spots for this are places like mid on Ascent or garage on Haven. Having the ability to occupy multiple lanes at once makes her very powerful

TURRET: This is Killjoy’s signature ability and it’s pretty good overall. It recently received minor nerfs reducing the tagging, so now in pro play, we see the players use this in a more informational capacity again. This is also her best tool for holding the flank on the attack because of its long line of sight. Also if you find yourself in a clutch, you can use this to help eliminate angles. Once you have the site or you’re no longer worried about the flank, make sure to recall it to reuse so that it doesn’t go to waste.

LOCKDOWN: Lockdown is Killjoy’s ultimate and it is worth 7 pips. This is an incredibly strong ability and one of the biggest differences between the sentinels. Viper’s ult holds space, Killjoy’s ult takes space, and Cyphers ult… well the less said about it the better. Use lockdown when executing onto a site to force the opponents away from the site. Equally, you can use this to play a site for retake on the defender half. However, managing the ult economy becomes very important. Lockdown has a lot of counters so it’s important to be safe and watch for utility that will break it. More and more we’re seeing pro’s place the lockdown in less “optimal” positions in order to make it safer. 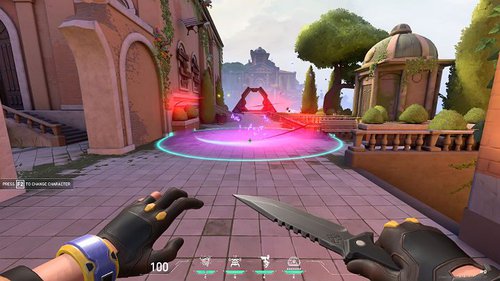 Realistically, playing Killjoy is very similar to playing the other sentinels, your jobs will be the same. On the defender half, you will be responsible for anchoring one of the sites. Because of her utility, this makes a lot of sense and is often simple. We will generally see a trap of some kind placed towards the main entrance on the site. This will punish over aggression and stall and attack to allow for rotates to come in and help.

It’s also smart to gather information elsewhere too with one of your informational bits of utility. If lanes or covered and you have an informational tool left, there are lots of powerful setups you can do with your team. 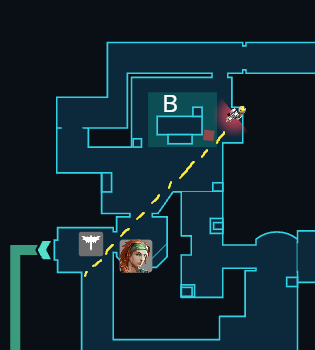 Something like this is a great example. As soon as the opponents get near the top of the dotted yellow line, the turret will activate. This is a signal for the Skye to pop-flash round the corner and will have a good chance at blinding and killing the B long players.

On attack, I think she is different from the sentinels though. Typically, it’s much harder to have a successful lurk. You are tied to your kit in a way that the other sentinels aren’t meaning that you can’t go on very deep lurk and still be useful to your team on-site at the same time. While the pro’s do still use her for shallow lurks sometimes, you should more commonly be with the team at the back of the execute. You can use your alarmbot and nanoswarm’s to halt quick retakes and buy your team some time to get the bomb down safely.

Killjoy is very strong in a post-plant situation though. As mentioned before, a couple of molly lineups will go a long way but even without them you can still deny a defuse just by placing them on the bomb and activating them proactively. If the rest of your utility hasn’t been destroyed, you can use it to help you feel safer, or spot entrances to figure out where the defenders are retaking from. 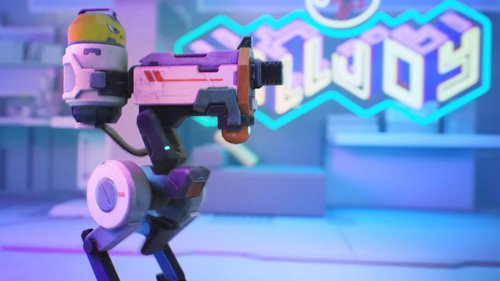 While Killjoy isn’t the most flashy agent, there are still lots of good pro players to learn and study from. A common recommendation I have for this is BBG’s Bjor. While he’s had to diversify recently, he still has a tremendous amount of games played on Killjoy, and even has a lot of helpful youtube videos explaining several different set-ups and other things. I would also recommend Steel and FNS as excellent pros to learn and study from for this agent.

Killjoy is a very beginner-friendly agent with simple tools and easy to understand gameplay objectives. She’s also still relevant at the top level having a pretty decent pick rate in major tournaments. Killjoy is a great place to start for learning sentinel as she isn’t particularly limited by map. At the top level, she is being slowly phased out however because of the number of counters to her utility, but I wouldn’t be surprised to see some of these changes tweaked to give her a bigger slice of the pie in this upcoming meta.

Is Valorant Cross-Platform?
As Valorant is highly regarded as one of the best video games today, it’s no surprise that some people may want to see if it can be accessed on their own devices other than PC. To...
22/05/2022

How To Receive Alpha Threat card in VALORANT
VALORANT pleased its fans with the release of a new comic book-inspired player card.
13/07/2022

What is Valorant PBE and how to Sign Up for it?
If you play Valorant, you may have come across a term called PBE. This is a term prevalent in the gaming community. So, what does PBE stand for? And what does it mean for the play...
01/04/2022

VALORANT Map Guide Fracture
Take a look at our in-depth guide to VALORANT's newest map, Fracture. We talk through the sites, how to attack and defend, which agents are good and more!
28/02/2022
Comments
No comments yet
Please login to leave a comment.
Login
Matches
Upcoming