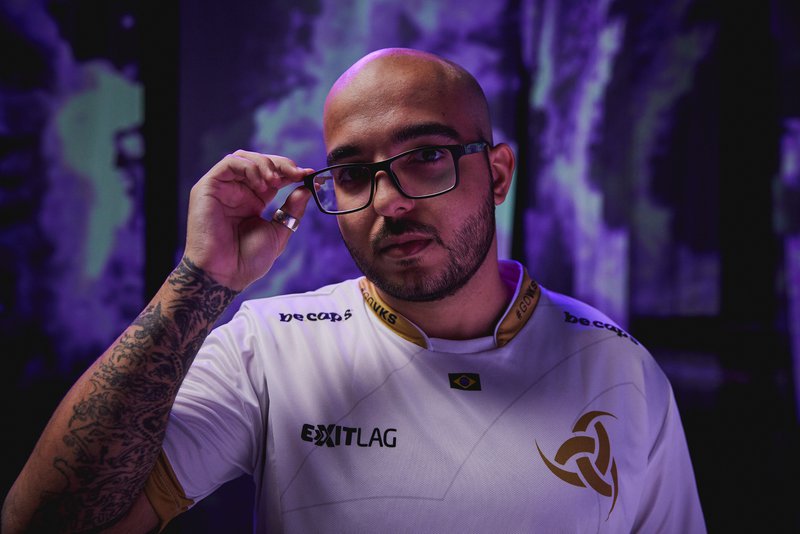 The biggest Valorant tournament of the year started today and here is the recap of all things that happened on day one. 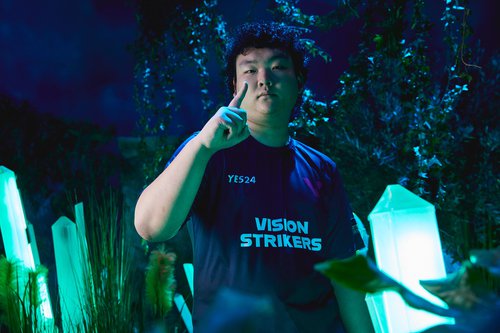 In the first series of this Valorant Champions Korean super team, Vision Strikers faced off against Full Sense considered by many the best team from the SEA region.

The South Korean team came into the series as the heavy favorites and they quickly proved why, in the first map of the series on Haven, the Koreans started strong with a 9-3 half on the attacking side, the firepower from Vision Strikers seemed to be too much for Full Sense, and the rounds the SEA team was able to win were due to individual players popping off.

Vision Strikers showed they were on another level not just individually, with no player having a negative KDA, but as a team that was very well coordinated and knew how to execute their gameplan, and easily took the first map 13-5 and the series lead. 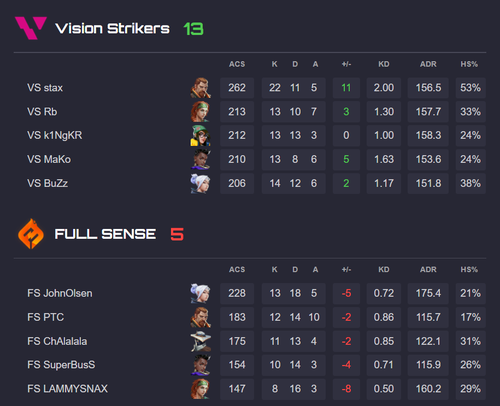 Map two was a replay of the first one, this time on Breeze Vision Strikers once again came out swinging and on the offensive side, they got a comfortable 9-3 lead with BuZz on Jett having a great impact on the first half.

Coming into the second half Full Sense needed to show more if they wanted to at least make this a competitive game, the SEA team still managed to win the pistol and eco round but Vision Strikers went on a four-round winning streak and closed the second map 13-5 just like the first one, taking the series 2-0 and advancing to the Group D Winner's match where they will face Fnatic for a place in playoffs. 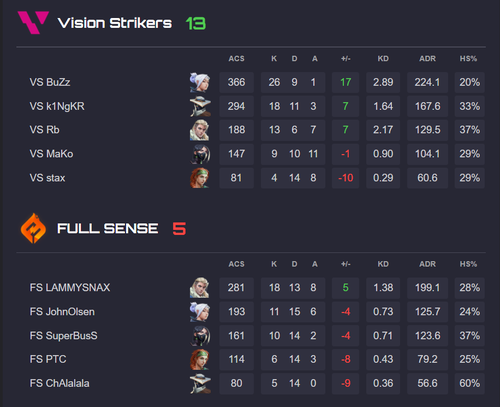 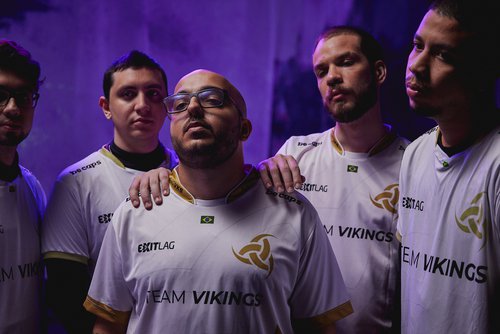 In the second series of the day Brazilian side, Team Vikings faced off against the Japanese representatives Crazy Raccoon, with this being considered the closest match up of day one.

On the first map of the series Icebox Team Vikings started strong on their offensive side, the Brazilian team went on to a 5-0 lead much because of their superior firepower, however, after a clutch from bazzi the Japanese team got on the board and the momentum shifted.

Both teams were doing some questionable plays, with Vikings losing two rounds against Ecos while both teams' ultimate use wasn't the best.

The first half finished 6-6 and we could see this was going to be a very back and forth series seeing both teams were evenly matched.

In the second half despite Crazy Raccoon winning the pistol and eco round Vikings were able to bounce back and went on 6 rounds winning streak, with some good retakes and the clutches falling the way of the Brazilian side they took the first map 13-9 taking the series lead with Sacy being the player of the game. 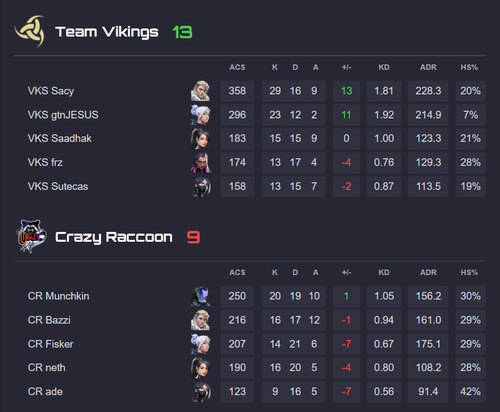 The second map followed a similar trend to the first one, on Haven Team Vikings once again started off strong this time on their defensive side but Crazy Raccoon was able to come back later in the first half winning the last five rounds and going into half-time 6-6.

Despite finishing the first half on a strong note Crazy Raccoon wasn't able to carry that momentum to their defensive side, Vikings went on six rounds winning streak making 12-6 in their favor, and were poised to take the win on the second map and the series. 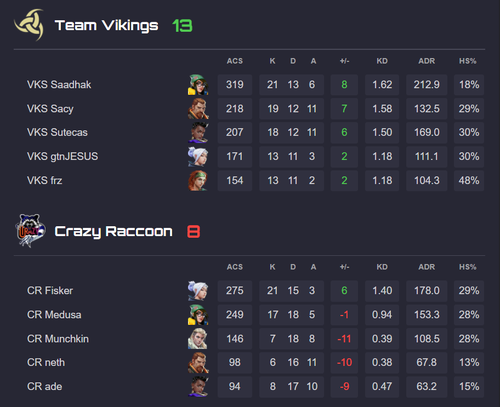 Fnatic defeated Cloud9 in the first battle of NA VS EMEA 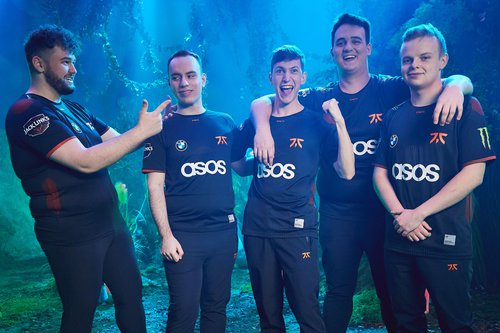 The last series of the day was also the most awaited one, the first NA VS EMEA battle of this Valorant Champions had Fnatic facing off Cloud9 for their opening match on group D.

Cloud9 was coming into the series as the slight favorites since we haven't seen much from Fnatic lately and what we had seen wasn't very encouraging.

Icebox was the first map and was picked by Fnatic, the first half was very back and forth, Fnatic played aggressively always trying to get map control and flanking C9 in the first rounds, but Cloud9 was quick to adapt. After a back and forth in the first couple of rounds Fnatic was able to win the last four rounds of the half with some great retakes that gave them the 7-5 lead going into halftime.

In the second half, Clou9 started strong winning the first four rounds of the half, however, two of those were really close rounds with Fnatic almost winning them despite being only on a semi-buy. The European side responded with four straight rounds of their own with Derke being very important to the success Fnatic was able to find on the attacking side.

This was being a nail-biting first map with an 11-10 score this game could fall to either side but on the back of a great performance from Derke on Jett and great team effort overall, Fnatic took the first map 13-11 and made it 1-0 in the series. 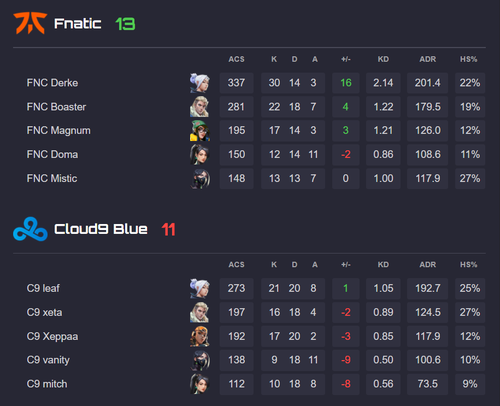 The second map was Split and just like in the first one the first half was a very back and forth affair, with teams trading rounds Fnatic was able to once again take the 7-5 lead into halftime.

Fnatic carried the momentum they had from the end of the first half to their attacking side and were able to take an 11-6 lead, with some good mid-round calls and executions Fnatic was close to taking the second map.

However, Cloud9 wasn't going to go down without a fight, the North American team was able to stabilize their defensive side and won seven rounds in a row and took the game 13-11, with a great comeback Cloud9 won Split and forced the third map. 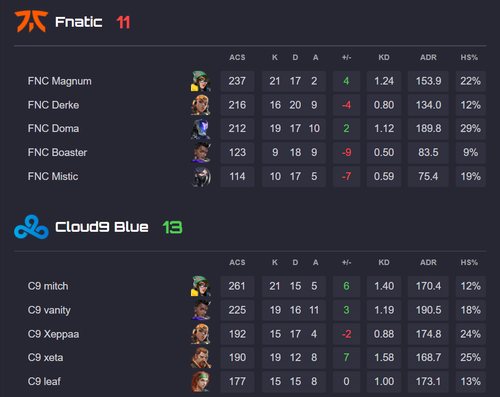 Fracture was the third and deciding map and Fnatic came out swinging, the European team started on the offensive side and quickly took control of the game with a 6-2 lead, Cloud9 didn't know what to do in order to stop their bleeding and stabilize their economy in the defensive side.

In the second half, Fnatic continued to ride the momentum they had built on the first half and eventually got to a 12-6 lead, despite that Cloud9 never through the towel and was able to mount a comeback winning four rounds in a row and closing the gap to 12-10.

The North American side was able to replicate their comeback from game two and took this game into overtime and now had the momentum on their side.

Despite all the effort to take the game into overtime Cloud9 ended up losing both rounds on overtime and Fnatic took the game 14-12 and the series 2-1.

With this win, Fnatic will face off against Vision Strikers in the Group D Winner's match, while Cloud9 will meet Full Sense in the Group D Elimination match. 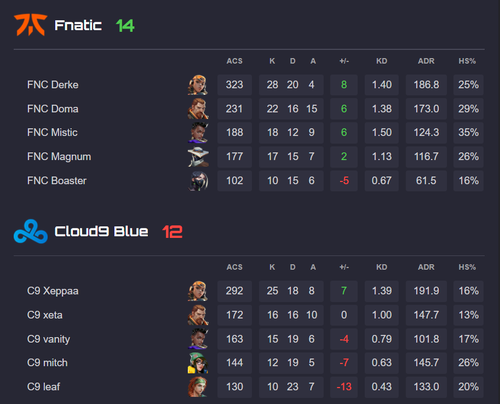 You can see the match details or watch the vods.