The Last Chance qualifier is the last opportunity for North American and the two best Oceania teams to qualify for Champions.

With Sentinels already having their spot in Champions guaranteed they will not participate in this qualifier, giving some chances to other North American teams to finally know how victory tastes.

How the 10 teams participating in the tournament will be decided. 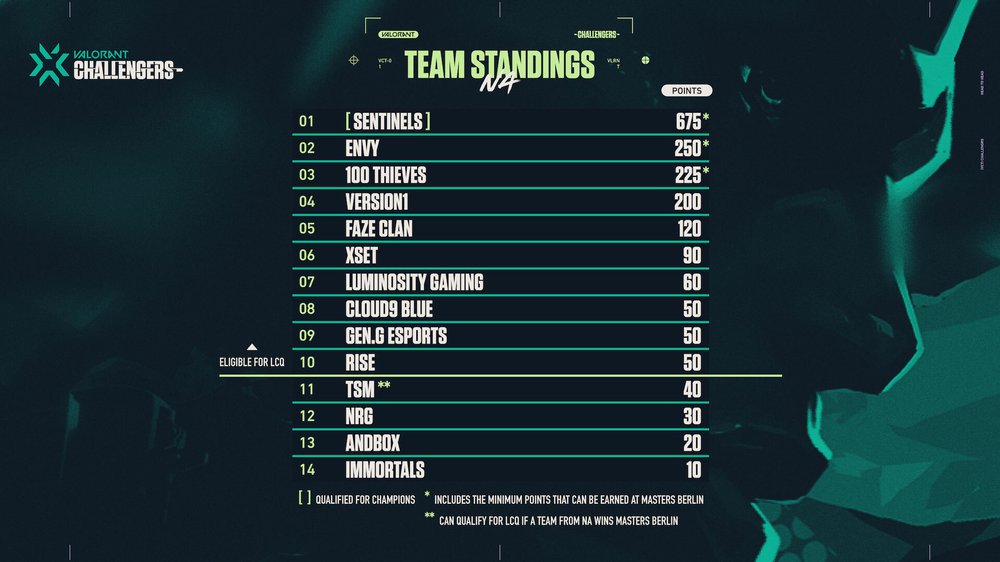 The event will start on the 12th of October and end on the 17th  and it will be streamed, 10 teams are going to participate in a double-elimination format on LAN, with the winner punching their ticket to Champions.

However, there is more, 8 of the 10 teams will be chosen according to their ranking on the VCT North America points standings, while the other two will be the winner and runner up from the Oceania region.

If any of the three North American teams win Masters Berlin Envy and 100 Thieves will automatically qualify to Champions allowing TSM to get invited to the Last Chance qualifier, as it stands the teams that will participate in the tournament are: Version 1, Faze Clan, XSET, Luminosity, Cloud 9 Blue, Geng.G and Rise.

In the event that none of the North American teams are able to win Masters Berlin, with Sentinels already qualified for Champions the second North American team with more circuit points, either 100 Thieves or Envy, will guarantee their spot in Champions while the third-best team will directly qualify to play in the Last Chance qualifier, ending TSM dreams and hopes of getting to Champions an experiencing international competition this year.

The rights of the pictures used in this article belong to Riot.