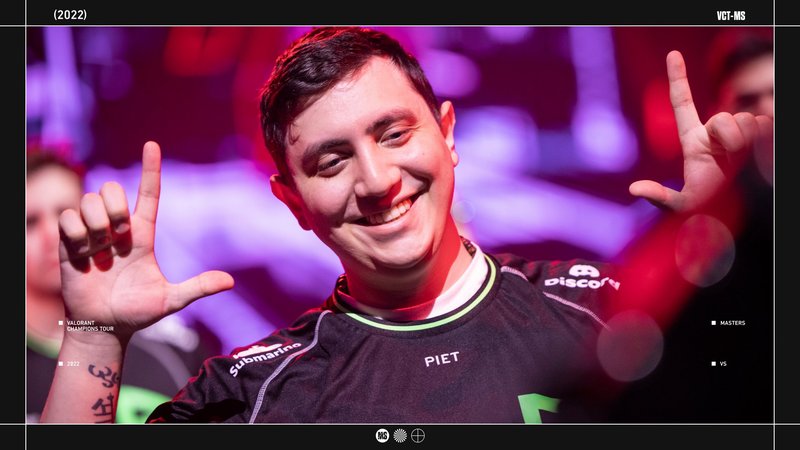 Today we found out the first team qualified for the Grand Final, and also said goodbye to one of the two remaining Asian representatives. 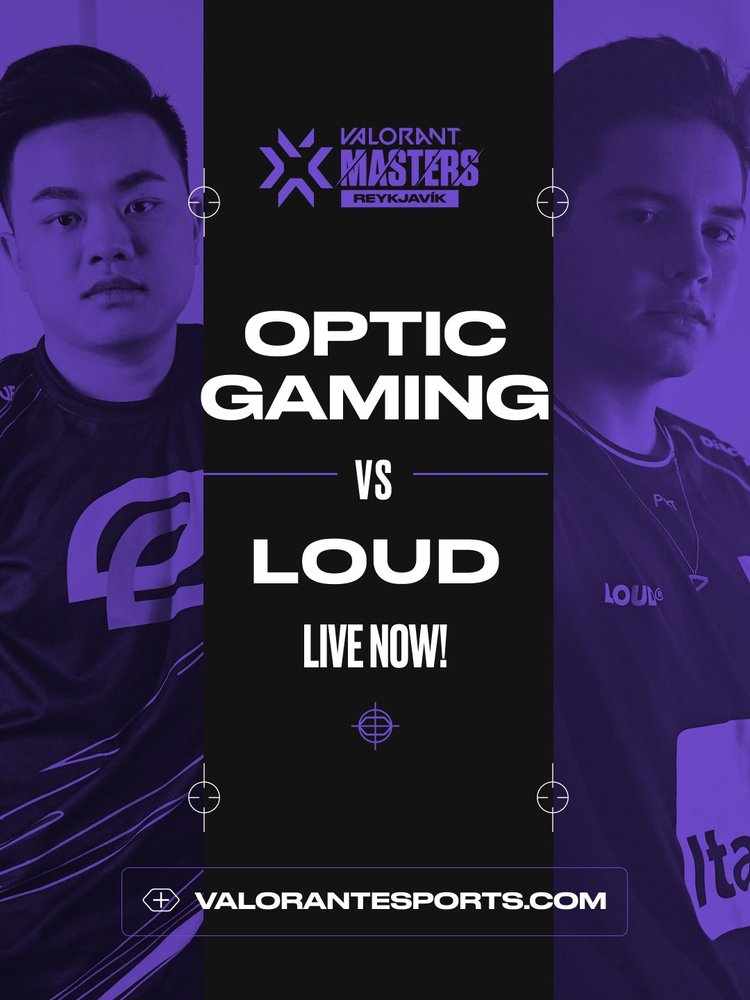 The Brazilian team was still undefeated since entering the Valorant scene and Optic Gaming wanted to end their streak and guarantee their spot in the Grand Final.

Optic Gaming picked Fracture, while LOUD choose Ascent. Icebox would be the deciding map if necessary.

Optic Gaming started their attacking side by winning the pistol round.

The North American team was clearly really well prepared for Fracture and was steamrolling LOUD on their attacking side.

Only in round seven LOUD was able to get on the scoreboard.

It looked like Optic Gaming was a far superior team on Fracture and LOUD was having a lot of difficulties finding any type of success.

We headed into halftime with Optic Gaming leading 10-2 and this game looked done and dusted.

The second half started with Optic Gaming on the driver seat and with all the momentum on their side.

With a victory on the pistol round Optic Gaming pretty much secured their first map.

Eventually, they closed the map 13-2 and were now leading the series 1-0. 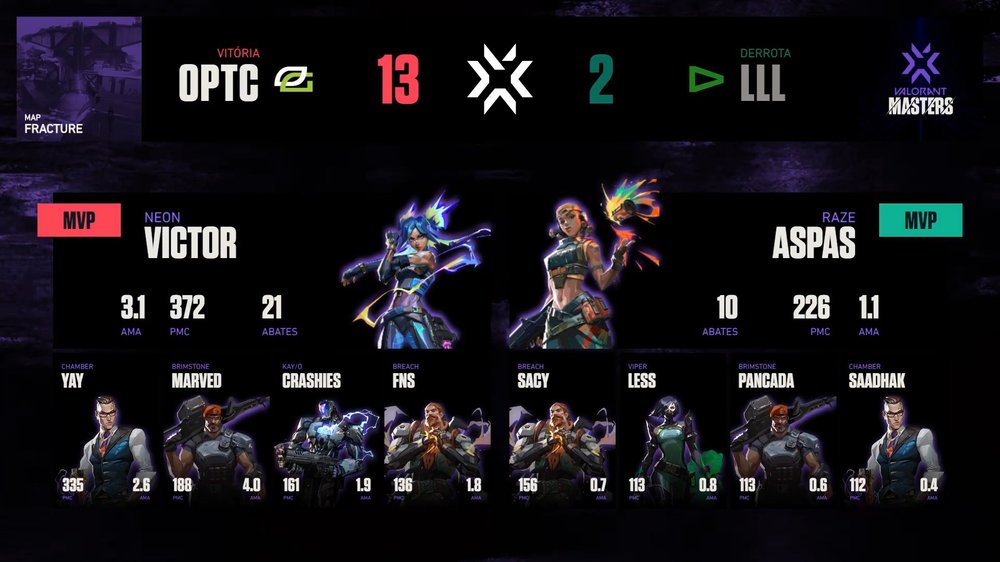 Victor was the MVP of map one, his Neon was fundamental for the success Optic Gaming was able to found especially on the attacking side.

LOUD came into Ascent behind in the series, but the Brazilain squad never lost this map, and are perhaps the best team in the world when it comes to Ascent.

This time it was LOUD who secured the pistol round on their attacking side.

It was a very back-and-forth first half.

With LOUD playing much better than on Fracture, but not being able to completely control the game.

Players from both teams were coming up clutch when it matters, and we had really battle on our hands.

Once again Optic Gaming was headed into the second half with the advantage, but this time it was only a two-round advantage as the first half finished 7-5.

Pancada stepped up on the pistol round and with a 4k secured his team the round.

aspas didn't want to fall short of his teammate and proved why he is seen as one of the best and most talented players worldwide, with an ace.

LOUD defensive side was really strong.

The Brazilian team looked much more comfortable on Ascent and went on a four round winning streak.

It was clear LOUD was very well prepared on their defensive side, and Optic Gaming was struggling to get anything going.

The retakes by the Brazilian team were amazing and they were close to forcing a map three.

After an amazing defensive half, LOUD won map two 13-8 and we were heading into Icebox. 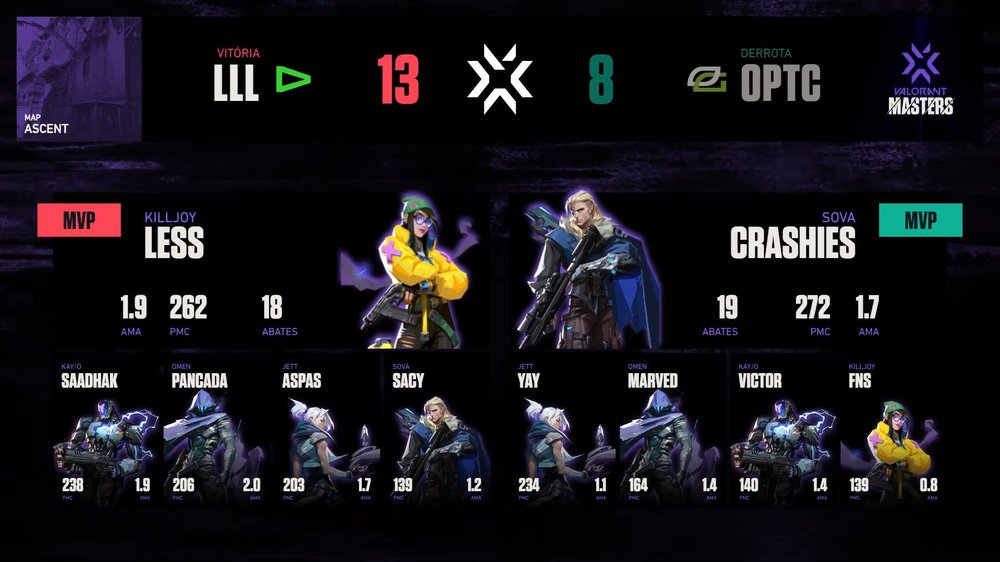 Everyone from LOUD played exceptionally well on Ascent, it was truly a great team performance, but someone had to take the map MVP, and that someone was Less.

Both teams have a really good record on Icebox so this was expected to be a very close map.

The Brazilian side was looking really good on their attacking side, with some players also showing brilliant individual plays.

Optic Gaming was struggling and saw itself down 7-2.

The squad needed to start winning rounds otherwise LOUD was going to run away with the game.

With Optic Gaming coming alive int the end of the half, they were able to cut the lead of the Brazilian side.

We went into halftime 7-5, with LOUD having the advantage for the first time in the series going into the second half

Once again LOUD came out with the pistol round win.

However, Optic Gaming was able to answer back winning three rounds in a row and the score was now 9-8 in favor of LOUD.

When it seemed Optic Gaming was in control of the game Less was able to clutch a very important round.

The Brazilian side was closer and closer to reaching the Grand Final, and in round 20 reached map and series point.

Despite that Optic Gaming didn't give up and was able to strike back in the following round showing it was far from over.

The final rounds were nail-biting and it all came down to the last round of overtime.

LOUD was able to stop Optic Gaming comeback, denied overtime to the North American team, and qualified for the Grand Final after a 13-11 win. 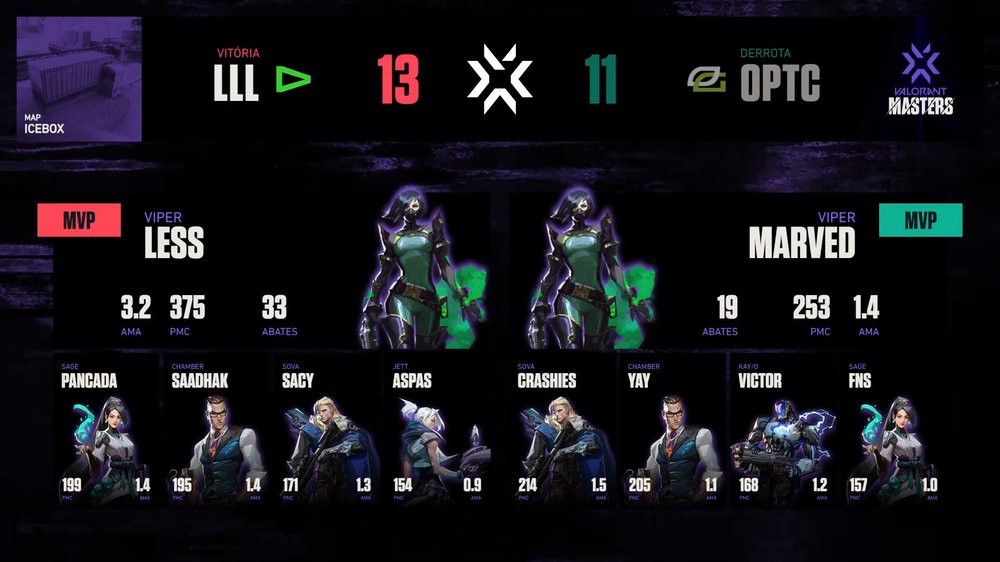 Less was the map MVP as the player had an amazing performance on Viper with 33 kills and a combat score of 375. 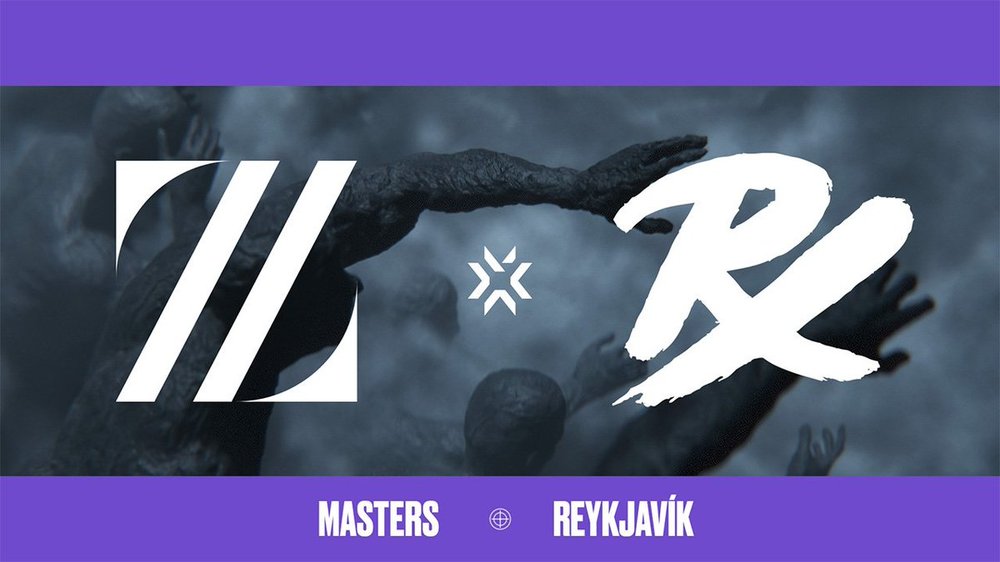 The loser of this series was going home.

It was the APAC champions who secured the pistol round win after a 4k by d4v41.

Paper Rex got off to a 3-1 start, but Zeta Division was able to win three straight rounds and took the lead.

However, Paper Rex ended the first half on a strong note.

On the attacking side, the Thai team won the last five rounds of the half and was in control of map one, with an 8-4 lead.

It was crucial for Zeta Divison to win the pistol round, or Paper Rex would increase the lead even more and it might spell the end of map one for the Japanese champions.

Paper Rex secure the pistol round, but when all looked lost Zeta Divison was able to covert their force buy and following round, closing the gap.

However, it proved to be too little too late for Zeta Division comeback attempt.

Paper rex showed they were the superior team and closed out map one with a dominant 13-6 score.

Jinggg was the MVP of the map on his Sage, posting a combat score of 298, something we don't see a lot in a sentinel player. 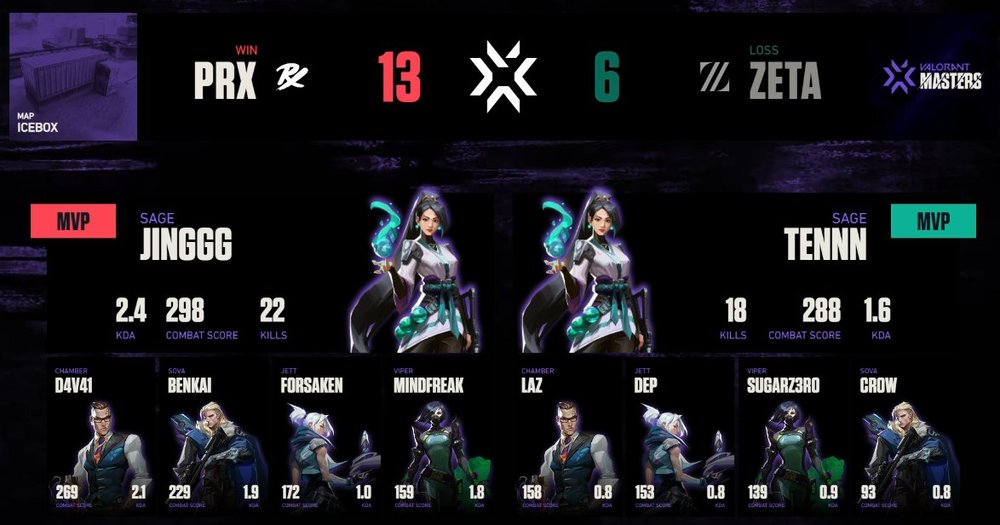 The task ahead of Zeta Divison was now very hard as they needed to win on their opponent's map pick to say alive.

Zeta Division had the start they needed, winning the pistol round.

It was a do-or-die game for the Japanese champions and they were performing at a very high level.

They got off to a 5-1 lead and were in firm control of the game.

Paper Rex was a shadow of what they have shown us in this tournament so far.

They were only able to win two rounds in the first half and with a 10-2 scoreline Paper Rex task was almost impossible.

Zeta Division continued their momentum and with a 13-2 victory tied the series. 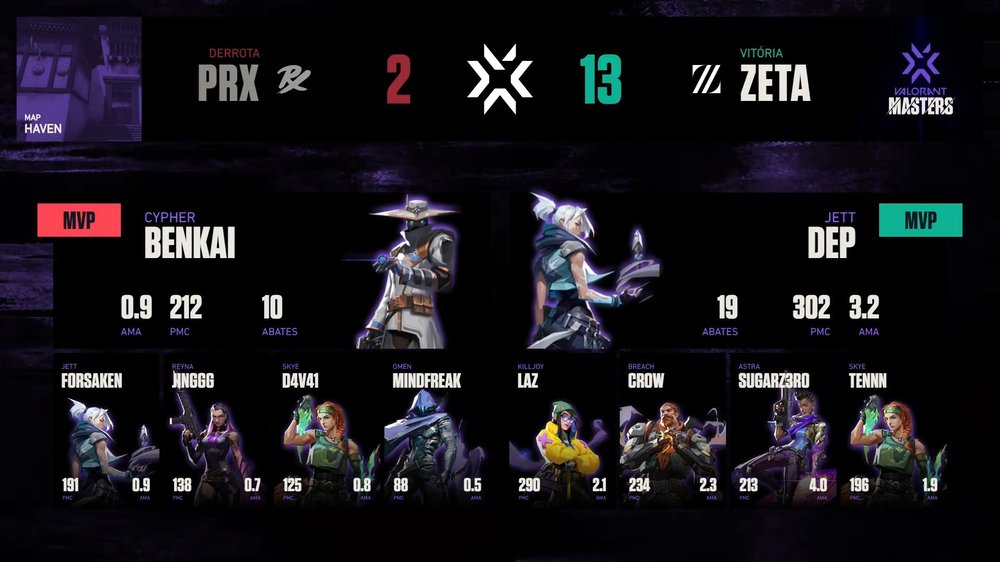 Zeta Division is undefeated on Split, and has beaten some of the best teams in the world on the map.

This time it was Paper Rex that won the pistol round, with Benkai winning a 2v1.

Both teams were trading rounds, and the game was closer than expected, especially because it was Zeta Division on the defensive side.

6-6 was the score in half time and it showed how close and tense the map was being.

With a great read on the pistol round, Paper Rex took the lead.

The Thai team was able to win three of the four first round in the second half and seemed like Zeta DIvision was going to have a tough time on the attacking side.

However, Zeta Division was able to adapt and started to play the rounds slower and was able to find success with that approach.

The game was still very back and forth and Paper Rex was not throwing in the towel.

But the Japanese team continued to find success on the attacking side, and are still undefeated in Split this event.

With a 13-10 scoreline Zeta Division cinderella story continues, and they will now face Optic Gaming tomorrow in the lower bracket final at 18:00 PM WEST. 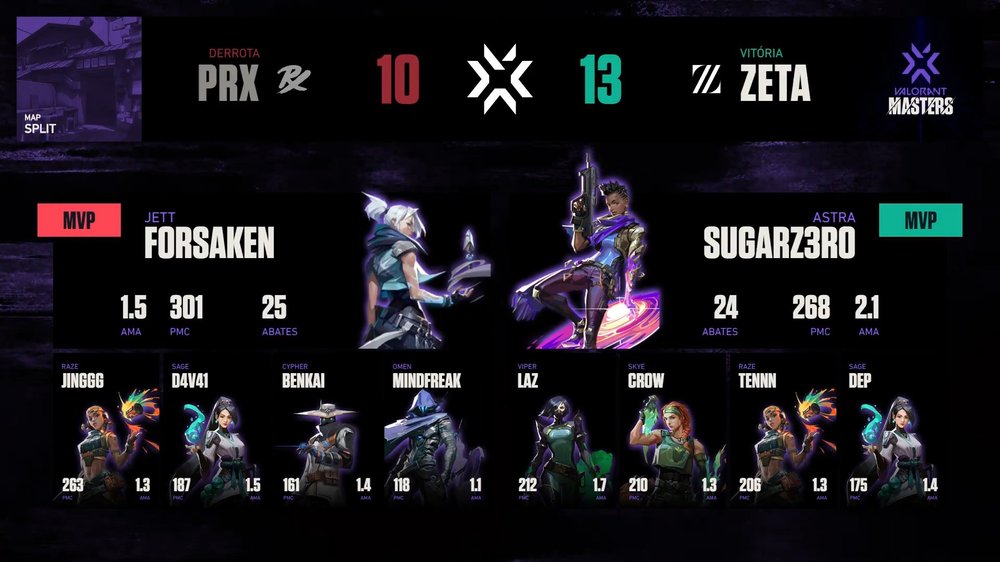 SugarZ3ro was the MVP of the third map, with a combat score of 268, and multiple impact kills, that helped the Japanese side win the map.