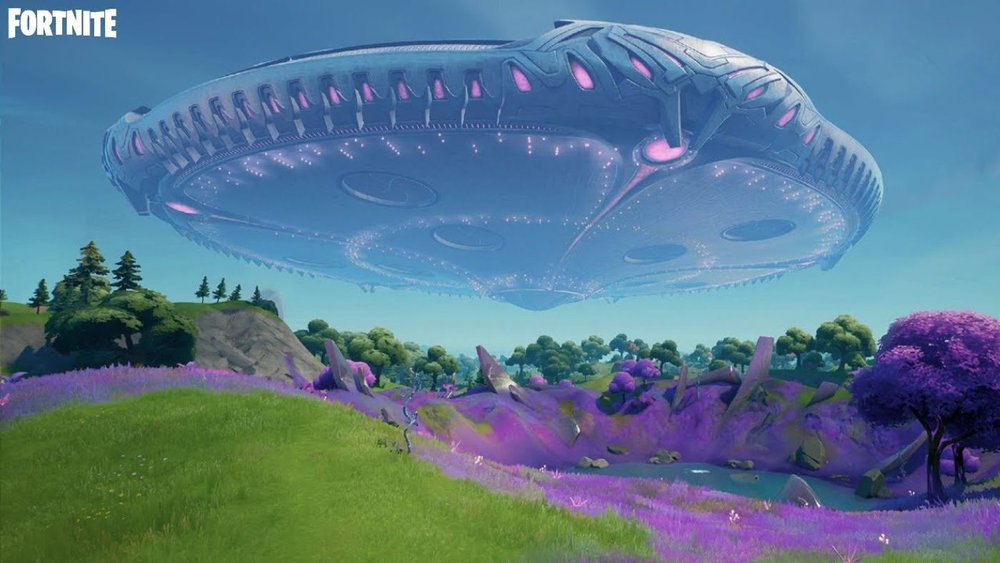 Aliens or extraterrestrial lifeforms have always been a popular topic in pop culture. Whether it is the scary Xenomorphs or the adorable E.T, aliens are an exciting subject. In addition to movies, aliens have also been part of video games, and Fortnite is no exception.

Epic Games loves to mix up pop culture with Fortnite. We have seen how they collaborate with famous IPs like Batman, Star Wars, etc. It is no surprise that there have been many alien skins in Fortnite.

So today, we will discuss the best-looking Fortnite alien skins released. 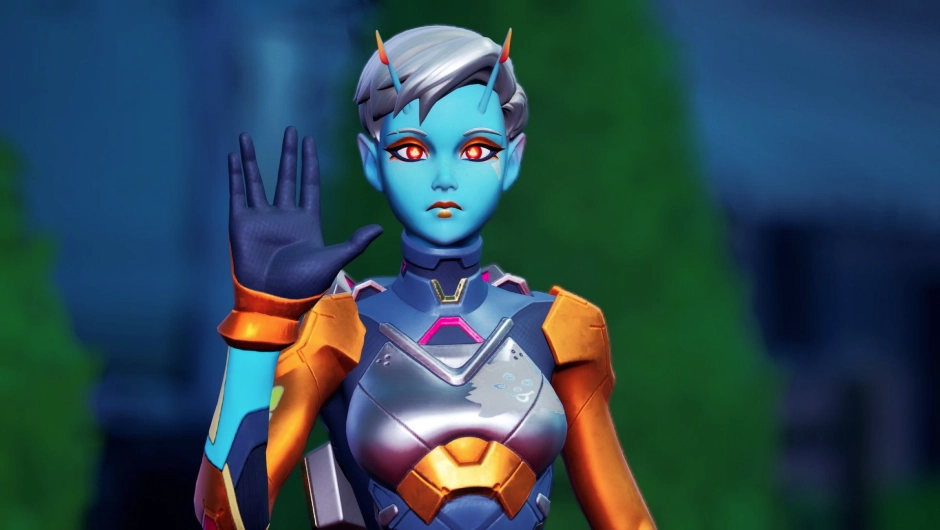 Aliens disguised as humans is a scary concept. So we are starting this list off with this concept regarding Fortnite skins. Joey skins was a two-in-one deal. It was added to Fortnite on June 8th, 2021, as part of Chapter 2: Season 7 Battle Pass.

At first glance, you might think that this “man” looks nowhere near an alien. However, that’s the beauty of this skin. Joey skin is an alien in disguise, and you can unlock the alien form by using a Built-in Emote. Joey is the first Fortnite skin to have both male and female features since the male features serve as a disguise. 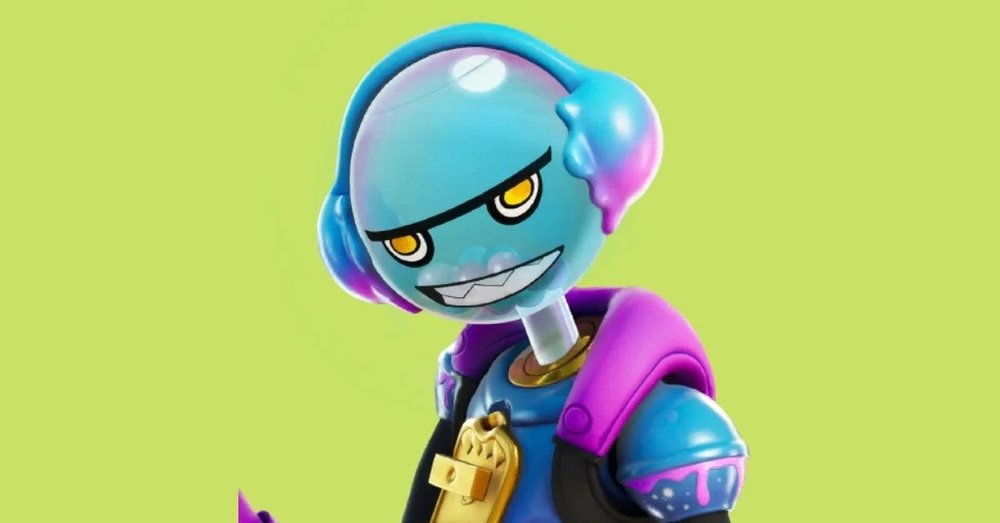 Gumbo is an evil alien who turns his victims into gum balls. He chews them and stores them in his head (which is conveniently shaped like a gumball machine). Gumbo was an unlockable skin in Chapter 3: Season 1 Battle Pass, released on December 5th, 2021.

Gumbo comes in three different styles, Default, Bitter, and Sour. He’s a purely evil character in Fortnite. However, his unique design made him very attractive. Gumbo comes bundled with an evil laugh Emote and a monstrous loading screen. Seriously, the loading screen is the stuff of nightmares. It’s a shame that this character didn’t have lore. 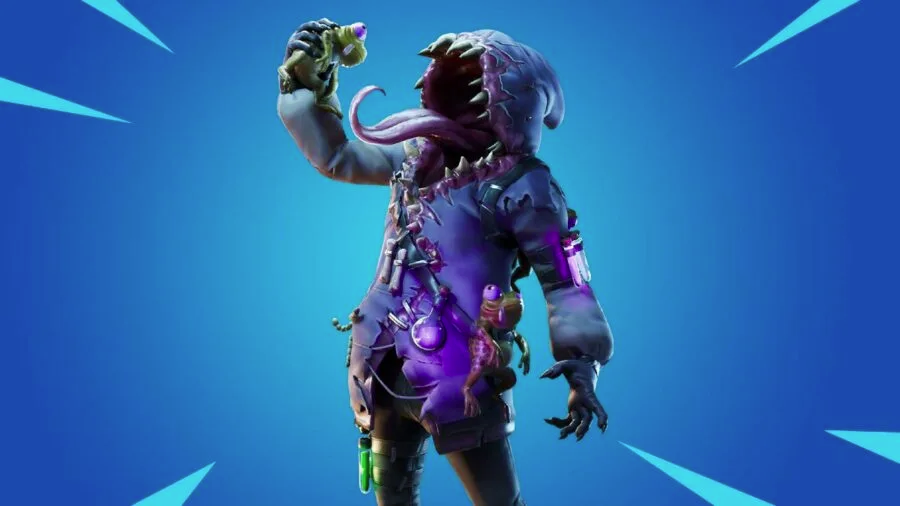 This animosity called Big Mouth was released on September 28th, 2019. He was first released in Chapter 2: Season 1, costing 1,500 V-Bucks. This skin features a nightmarish appearance with a vast mouth.

Big Mouth is a nasty alien from an undiscovered Swamp Planet, whose creatures have expanded jawlines with jagged fangs, sharper claws, and long tongues. This gives Big Mouth a sinister appearance that will undoubtedly frighten opponents in Fortnite Battle Royale. Big Mouth comes with a Dual-Wield Harvesting Tool called Gnashers, which are equally frightening. 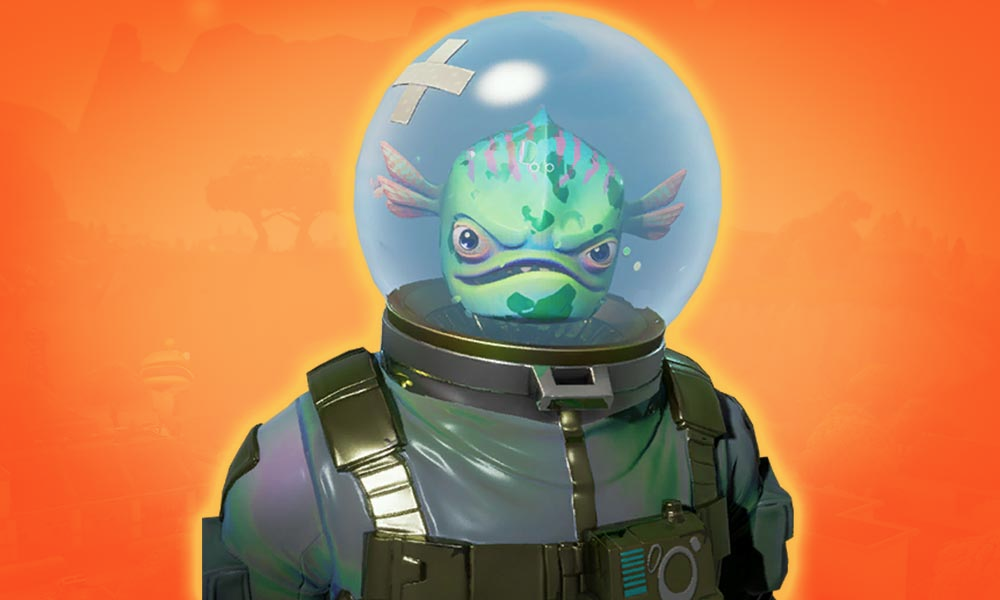 Leviathan is a Legendary Skin in Fortnite: Battle Royale that can be bought in the Item Shop for 2,000 V-Bucks or with the Leviathan Bundle for 3,740 V-Bucks. He debuted in Season 3 and is a member of the Space Explorers Set.

This skin features a fishbowl enclosing a piranha fish as a head. Furthermore, this amphibious alien is dressed in an astronaut's Suit while navigating shallow swamps. Leviathan is a very unique and wacky skin in Fortnite. If you’ve purchased the Leviathan Bundle, you will get an equally whacky Harvesting Tool called Global Axe. 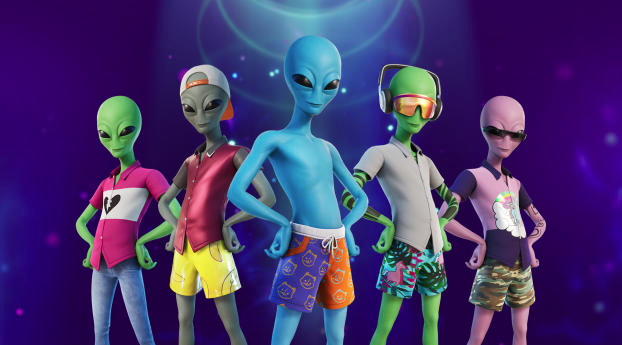 Human Bill is a charming and exciting skin that Epic Games added to Fortnite on August 18th, 2021. Human Bill debuted in Chapter 2: Season 7 as part of the Hot Alien Summer Set. If you’re a fan of aliens in movies, then Human Bill might seem highly similar to Paul the Alien.

The biggest highlight of this skin is the customization potential. You can change everything from head to toe (quite literally). In addition, you can mix and match various outfits together. It comes to the Item Shop regularly. Users may purchase it and make Bill appear as human as possible. 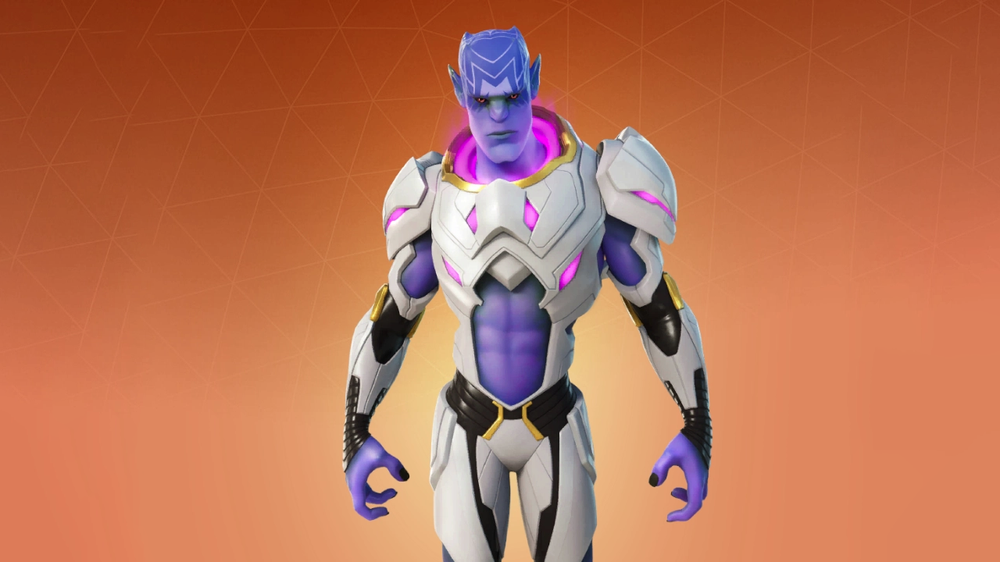 Kymera is another fully customizable alien skin in Fortnite. This skin was added on June 8th, 2021, as part of Chapter 2: Season 7 Battle Pass. This entire skin bundle will remind you of the oddities you used to see in Ben 10.

Kymera is fully customizable. You can choose the head type, eyes, and face. There are many options available in each category. However, you can’t change your attire of Kymera. This skin was the highlight of Chapter 2: Season 7 Battle Pass. Plus, this skin opened the door for many customizable skins to come. 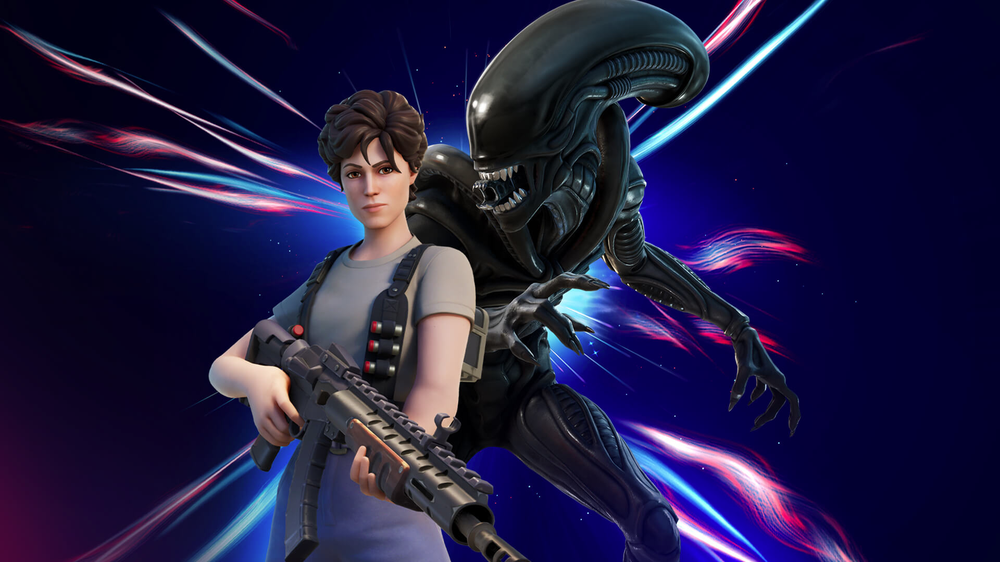 How can we talk about alien skins and not talk about one of the most iconic aliens in the history of pop culture? Yes, we are talking about Xenomorph. Fortnite added this slimy and vicious creature from the Alien franchise on February 26th, 2021.

Xenomorph was added to Fortnite as part of the “In Space... Set,” which costs 2,200 and includes Ripley. This skin is simply terrifying. What can be more dangerous than a Xenomorph? A Xenomorph holding a gun. All in all, this is one of the most unexpected collaborations Fortnite has ever seen. 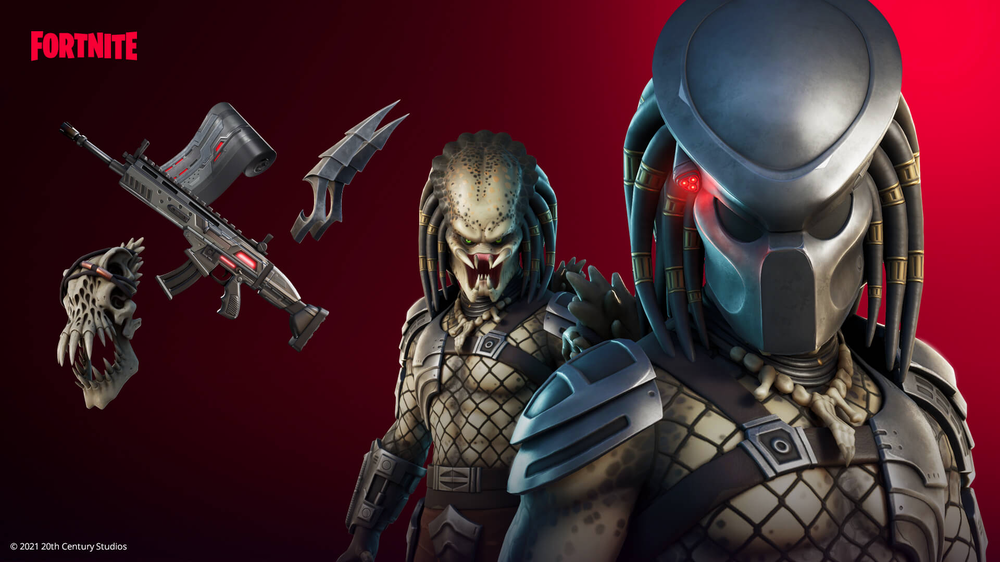 While we’re on iconic movie aliens, let’s discuss the Predator skin in Fortnite. This skin was added to Fortnite as part of Chapter 2: Season 5 Battle Pass. It was released on January 20th, 2021.

The Predator franchise is famous for these violent and vicious creatures. They look as terrifying in Fortnite as they do in movies. The skin comes in two styles; Default and Helmet Off. In my opinion, the Helmet Off style looks much more badass than the Default one. Overall, Predator skin was a fantastic addition to Fortnite. 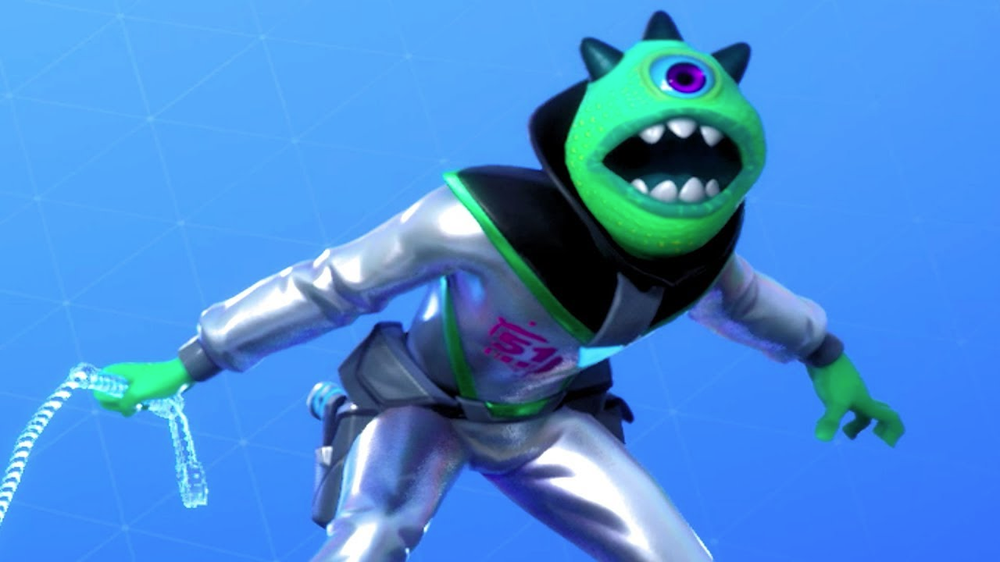 Zorgoton was probably the very first alien-like skin added to Fortnite. You can purchase him from the Item Shop as part of the Traveler Bundle. It was released on September 22th, 2019. Zorgoton debuted in Season X and is part of the UFO Set.

Zorgoton looks classic yet entirely unique. He came with two outfits, Default and Dark. Fortnite released this skin during the whole Area 51 fiasco. Their decision hit the right spot, and fans were pleased with this skin. Overall, Zorgoton’s design makes him stand out among the other alien skins in Fortnite. 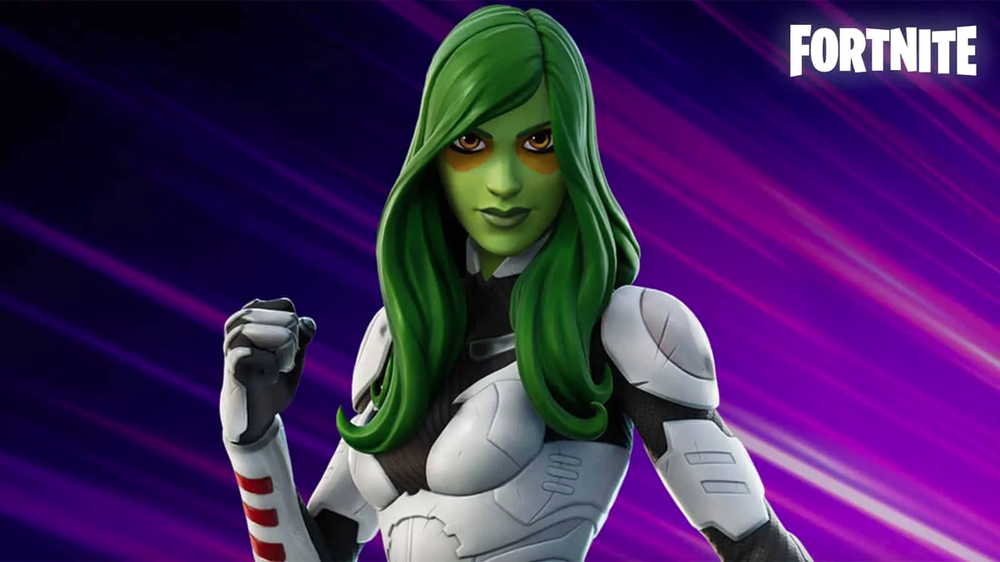 Gamora is a very well-known character among comic book fans. However, she has become more popular thanks to the Guardians of the Galaxy movies. Gamora was part of the Guardians Of The Galaxy Set that was released on August 15th, 2021.

Technically many superheroes are aliens. However, Gamora’s green skin color makes her stand out among other female superheroes. Remember that this isn’t the same Gamora as the MCU but a more comic-accurate version of her skin.

Speaking of superheroes, check out our list of the best superhero skins in Fortnite.

So this was our list of the best-looking Fortnite alien skins. This wasn’t a ranking of these skins because they’re all excellent in their own way. While some of these are from Battle Pass, and you won’t be able to purchase them, you should still keep an eye on your Item Shop if one of these skins shows up.

How To Gain Up To 700,000 XP Using A Glitch In Fortnite
Want to make use of the latest Fortnite glitch and level up the game’s Battle Pass? Check out this article where we guide you on how to use this glitch!
15/11/2022
838 Views

How To Find And Destroy Hiding Places In Fortnite (2022)
There are some hidden places in Fortnite where you can get rewards by destroying them. However, this article will help players who don't know how to find and destroy such places t...
25/05/2022
2112 Views

How To Throw Candy From A Vehicle In Fortnite
Want to know how to throw Candy while in a vehicle in Fortnite? Check out this article where we guide you in detail!
02/11/2022
911 Views

How to Slide in Fortnite for PC, PlayStation, Xbox, & Switch
If you're unsure about how to slide in Fortnite, you're not alone; many players have struggled to figure out how to use the much-desired feature. We've put up a simple guide to he...
22/05/2022
1452 Views