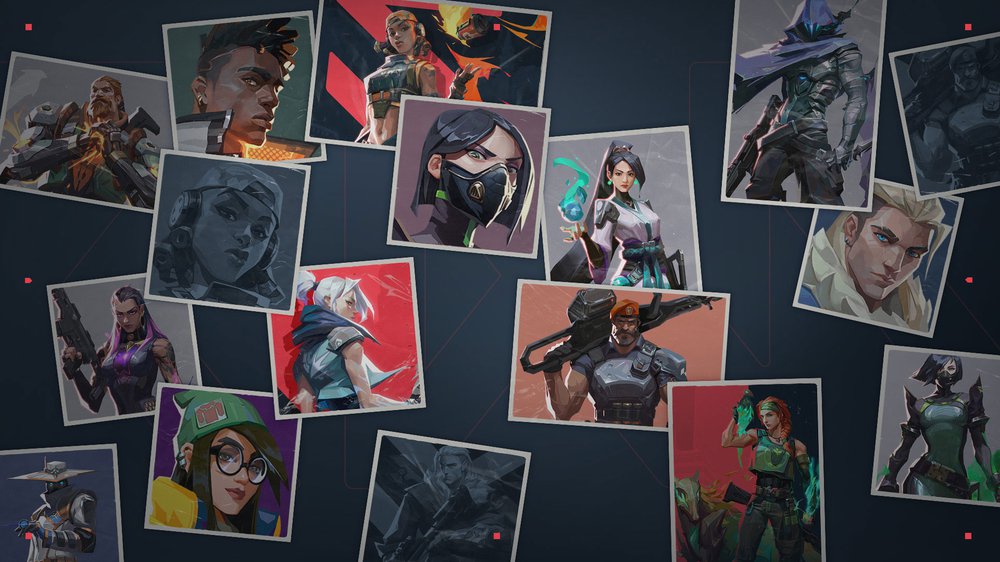 So there’s a lot of big VALORANT events coming up. We’ve got LCQ for several regions and then, of course, Champions. Now is the perfect time to start watching the professional scene if you haven’t already. That being said it can be a little daunting. If you’re coming from just casual ranked (or not a CS:GO background) there might be a few words or phrases that the casters use that might not make sense, but I’m here to break them down for you.

The first word and one of the most common words you’ll hear when watching VALORANT. It will be used generally referring to the attackers and describes a type of strategy a team might use. A default is just that, a default strategy that is repeatable. We typically see the team spread out across the map to cover every “lane”. A good default often has the same goals.

Take/Deny map control: By holding every lane you prevent defenders from pushing and getting themselves into tricky, hard to predict positions. It also keeps all your options open for which site to end on

Understand your opponent’s set-ups: If you gather information from all across the map you can easily get key bits of info. For example, do they have an Operator? Where is their Sentinel playing? Are they eco?

Bait out key pieces of opponents utility: A good default is designed to tease out parts of your opponents kit. If they have to use a Sage wall to make themselves feel safe, they don’t have it for a retake. If you can get their Sova to use his drone, you have lots of time to reset afterwards and make that information useless

Every pro team will use defaults as part of their game plan and casters will most certainly mention it.

This one is a little tricky as it can be used in 2 different ways. The first is a “contact play” or “Contacting somewhere”. This is basically walking in to take some space. For example, if a caster on Haven says “They’re contacting onto A” this means that the attacking team will walk down A long and A short without using any abilities. The aim is to take space giving up no information or abilities.

The second way this word is used is to refer to somebody’s contact. You might here the phrase “X is peeking on Y’s contact”. This is a sort of trap set up and I have drawn a rough example below. 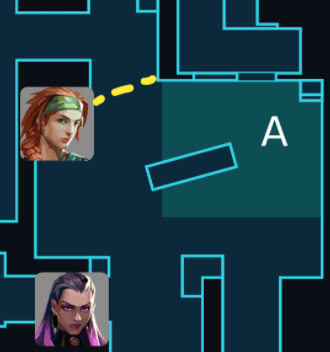 In a situation like this, we would see the Reyna “peek on Skye’s contact”. This means as soon as Skye sees an opponent pushing them the Reyna would peek and shoot them in the side.

A lurk is another super common concept in pro play and is something that casters will definitely bring up. I’ll also explain timing here because they’re very related. Lurking is the art of not playing with your team, typically trying to flank the defenders as they’re attempting a retake. People like DavidP and L1nk really have this mastered and if you watch them play this will become easy to understand. 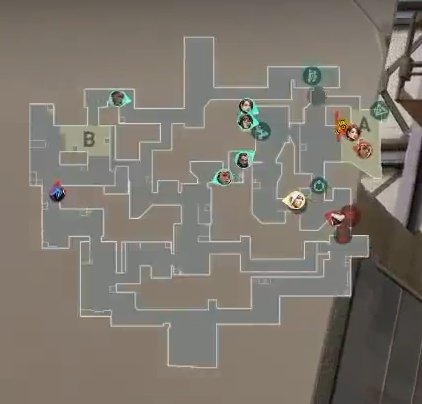 We can see how DavidP’s plan (the attacking Omen) is to get behind the defence and cause havoc from a place they cannot expect him.

A timing is quite similar. You have a good timing if you’re in a situation or position where the enemy would not think to expect you. Say you managed to walk all the way up mid on Split and got into vents. If the opponent mid player was holding the cross but looked away for a second while you sneaked through, you’d have a great timing. This is different to if they leave mid completely because they would be expecting you in those positions. Often a lurking player is looking to catch a timing to help them win the round.

Next is the idea of a bait or “baiting someone in”. Now if you’ve played enough ranked you’ll have definitely been baited before, teammates won’t follow you or something similar, but of course, that doesn’t happen at the top level. Instead, there is the idea of baiting your teammate in somewhere. 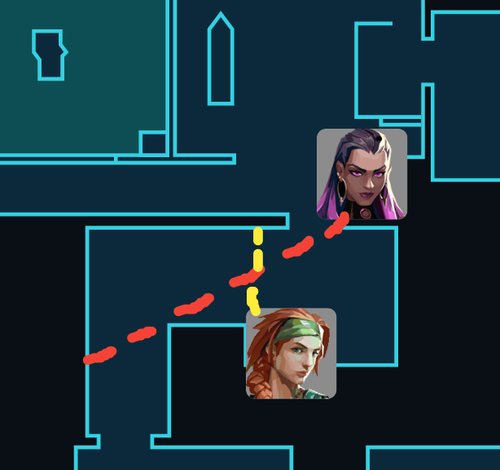 This is a good example here on Ascent B main. Here Reyna is “baiting Skye into B main”. This is again a type of trap setup. We would see Reyna spot the enemies first and ideally, she’d get a kill and dismiss away. However, the core of the idea is simply to be seen by the opponents. The plan is to convince the opponents that Reyna is the player responsible for holding B main so when they see Reyna back away they can push up quickly. This is of course designed to make them not look for Skye and she can then get kills from this situation. You’ll often see teams set up trap plays in this “baiting” fashion so don’t be surprised if the casters bring it up.

The final term here is execute. This refers to the period of time between attackers bursting onto the site and planting the spike. You’ll often hear it used like “They’re setting up for the execute” or “a quick A execute”. Typically teams will spend a long time planning out how best to use their utility when attacking a certain site. You tend to see well-coordinated utility combos to maximise the efficiency of taking the site.

I hope this guide has given you a nice starting point if you're new to watching competitive VALORANT, and hopefully, it should make your viewing experience easier and more enjoyable.

Killjoy Valorant Guide
An in-depth Killjoy Valorant guide that will explain everything you need to know about the Agent and the best way to play with it. From her strengths to weaknesses you will find e...
21/12/2021
2486 Views

Best Brimstone Smokes for Fracture
Brimstone is a popular smoker in Valorant right now. Players are using him on Fracture and Bind. Here you'll find a guide how to play Brimstone on Fracture.
21/05/2022
2241 Views

Omen Valorant Guide
An in-depth Omen Valorant guide that will explain everything you need to know about the Agent and the best way to play with it. From his strengths to weaknesses you will find ever...
12/01/2022
1334 Views

WRIST vs. ARM AIMING: Which is BETTER for VALORANT Game?
Which one is better? It really depends on what type of player you are. Is your playing style more fast-paced? If so, then wrist aiming is probably for you. On the other hand, A...
28/12/2021
5437 Views
Comments
No comments yet
Please login to leave a comment.
Login
Matches
Live