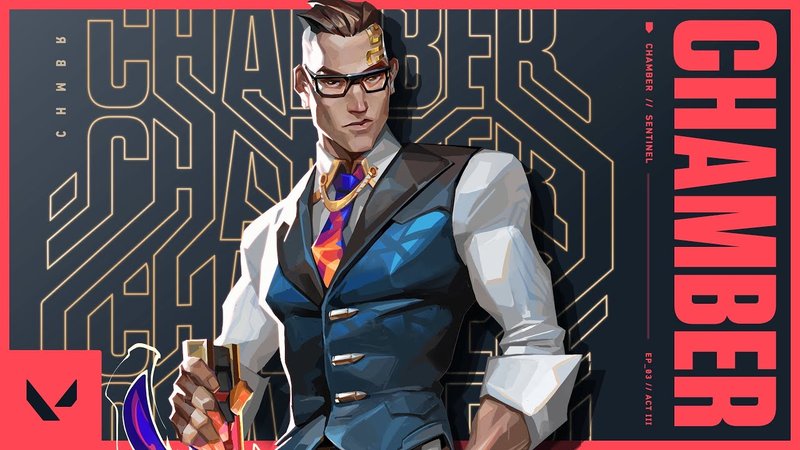 Two days ago, Jeff Landa announced huge changes in VALORANT with patch 5.12. He mentioned the map rotation, the new report system for smurfs. But the most important change in the upcoming patch is Chamber. This agent was added to the game one year ago, in November 2021. During this period of time, he was in meta with a huge pick rate on many levels, from amateur to pro.

One fan recently presented his concept of a Chamber "fix," which many on Reddit liked. It concerns changes to RENDEZVOUS and Headhunter that will make the Chamber less vulnerable.

Finally, all the changes that will affect the Chamber in patch 5.12 are officially announced.

"In Patch 5.12, we’ll be making a number of changes to address these concerns. With this update, we want to sharpen Chamber’s identity as a precision-focused Sentinel that puts his body on the line to hold areas, while significantly reducing his sphere of influence and introducing more counterplay for opponents", - Riot Games said in the announcement.

Although they increased the teleport radius and made it so that you only need to place one anchor, the other changes will have a bigger effect on Chamber. This includes an equip time increase of 0.3 seconds. But most importantly, most likely, depriving Chamber of the ability to use it after it's broken.

Of course, Chamber got a huge advantage by having the teleporter for almost the entire round, even if someone destroyed it.

This change is kind of like the Killjoy fix in its day when she could put its turret on one site and be on another. Now the Chamber trap won't be able to work that way either, making it look more like a Sentinel instead of a Duelist.

The ultimate fix seems also predictable and obvious. This cannon was too strong. Especially for Chamber to score the right number of kills was not a difficult task, and therefore he could take advantage of the Tour de Force literally in the third or fourth round.

Why Do Riot Games Decide To Fix Chamber That Way?

According to Riot Games in the announcement, they had two goals for changing Chamber:

"Counterplay” and “Deliberate” are foundational principles to VALORANT Agent design that the team discusses quite often. Chamber’s mechanics took the place of counterplay in many cases, and the small number of restrictions on his abilities meant he was not required to be deliberate in thinking about setup. This made Chamber deadly at any angle".

Changes are coming to PBE this Friday, December 2. The closed beta test will take place from Friday evening to Monday morning. Check out our article to learn more about what is Valorant PBE and how to sign up for it.