Shooter games are adored by most players due to the competitiveness and the thrilling action packed experience they bring. Each shooter game out there brings its own unique gameplay style alongside a distinctive experience. The currently booming multiplayer FPS, Apex Legends, has one of the most iconic playstyles that combines speed with strategy and accuracy. This action-packed game has been the favorite of most since its release back in 2019, and it just got a new younger sibling, Apex Legends Mobile.

The release of Apex Legends Mobile

Most of the famous big multiplayer titles have been getting their very own mobile game adaptations during the past few years. Apex Legends being on top of this list, a mobile game for it was inevitable as well. Electronic Arts first confirmed that an Apex Legends mobile game would be coming out eventually and they officially revealed Apex Legend’s mobile release title to be “Apex Legends Mobile” back in April 2021. Months later, the game entered its beta-testing phase limiting only to India and Philippines.

Almost an entire year went by without news about an official launch. However, in March 2022, EA finally broke the silence announcing that the game was set to be released in limited regions including Australia, New Zealand, Singapore, Malaysia, Philippines, Indonesia, Mexico, Peru, Argentina, and Colombia. And after a couple of month following this limited release, the game was officially launched worldwide on the platforms IOS and Android on May 17, 2022.

Now that the game is finally here, let’s go through everything you need to know about this most hyped mobile game launch of the year, including how does it differ from the PC version, what heroes you can play, and the minimum system requirements the game demands.

Unlike most mobile game adaptations, Apex Legends Mobile is a completely different game according to the developers. Even though the game still seems to be packing the high-octane gameplay its elder sibling is famous for, it won’t be having the same style of progression, content or the inventory of the original game. Apart from that, Apex Legends Mobile also won’t be featuring any cross-play between mobile and PC/console versions unlike the original game.

This version of Apex Legends is more optimized to fit on a smaller screen, and controls and mechanics are catered to bring the classic mobile battle royale gaming experience. This compact design will allow both the experienced and newcomers to have a fair gaming experience, giving a chance to learn the game from the scratch. However, one of the most eye-catching differences the game has is the inclusion of exclusive heroes that are only available in Apex Legends Mobile.

Apex Legends is well known for being one of the faster-paced first person shooters among gamers. The gameplay revolves around the abilities of the game’s characters that brings both aggressive and defensive playstyles also while retaining a fast-paced gameplay. Similarly, Apex Legends Mobile also brings a unique fast paced gameplay style different from most other multiplayer shooter mobile games out there, but what is more surprising is that it is also different from its original PC/console game. The mobile version is catered to a smaller screen and has a more compact feel to it in comparison. The new game also brings a third-person mode to the franchise to facilitate the mobile gaming ergonomics, to compensate for the limited display sizes, and to fit the preference of the majority of the mobile gaming community. 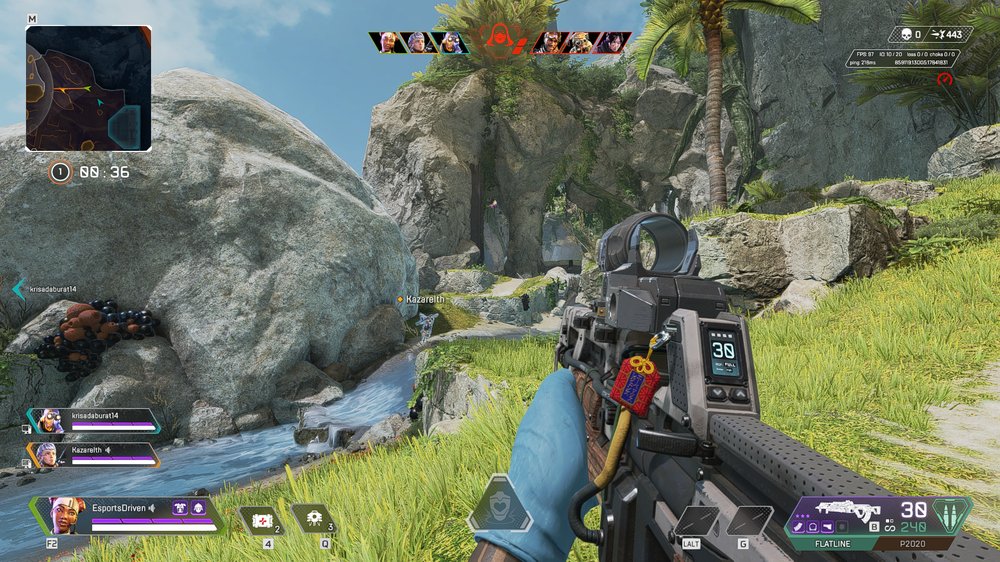 TDM is a brand new addition to the Apex Legends Universe and players can utilize this mode to practice certain weapons. However, it is currently limited to the mobile version. The standard Battle Royale mode of Apex Legends Mobile will put 60 players in a map in squads of three where players will fight to become the top squad out of the 20. The Arenas mode bring a round-based 3 vs. 3 experience just like in the main game. Apex Legends Mobile also features some maps from the main game including World’s Edge, Thermal Station, Artillery, and Overflow. The mobile game has also resurrected the Skull Town map where players can only play the TDM mode on and Market has also been added as standalone map to the same game mode.

Nonetheless, the most interesting difference in the gameplay department is the introduction of exclusive Legends. Currently only the mobile version has a confirmed exclusive Legend and it is unsure if the main game will get any soon. And in addition to the exclusive new hero, the game has brought back nine out of the 21 other Legends from the main game. The list during the launch included Bangalore, Bloodhound, Caustic, Gibraltar, Lifeline, Mirage, Octane, Pathfinder, and Wraith. More Legends that weren’t added to Apex Legends Mobile from the main game are expected to be added in the future as the game goes on.

An exclusive Legend to kick-off the mobile launch… 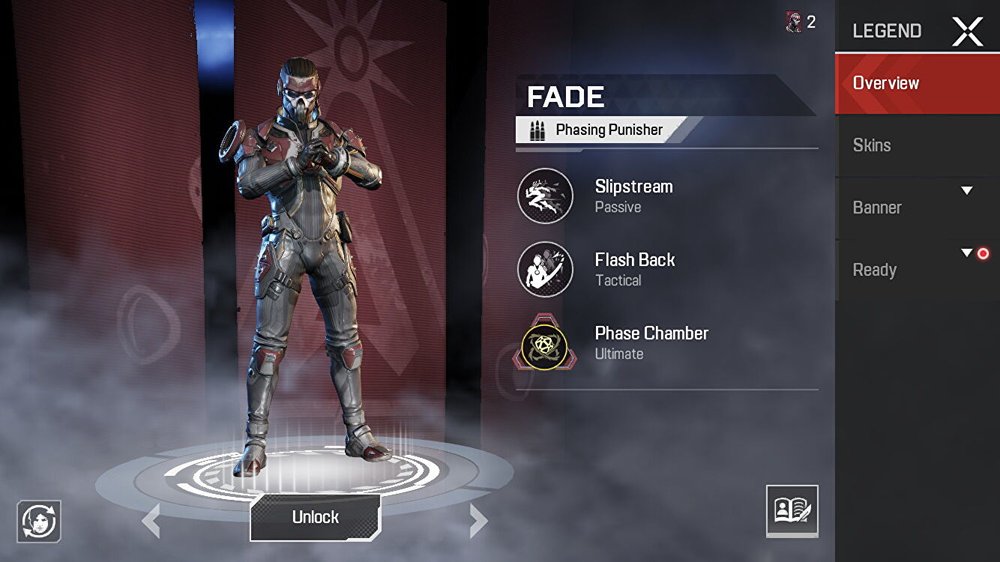 The Apex Legends Mobile launch was a special one because players and fans got to see the latest exclusive new hero in the Apex Legends universe, “Fade.” The game’s design director, Jordan Patz specified that Fade is a Legend built specifically to fit the mobile gameplay style and that this new mobility-based Legend wields a suit based on the same technology as the famous Apex Legend hero, Wraith.

Fade’s ability kit accommodates the fast-paced playstyle of the game perfectly, giving him the extra mobility the rest of the Legends lack. His abilities are as follows;

You can unlock this new mobile-exclusive Legend by simply collecting 10 Fade Pieces or buying him right out for 750 Syndicate Gold. Fade Pieces are available for players to acquire free by completing tiers of the all new Prime Time Season 1 battle pass. Reach level 25 in the battle pass to unlock all 10 Fade Pieces for free.

Minimum System requirements and how to get the games

Apex Legends was comparatively a smaller game when it launched back in 2019. The game would run perfectly fine on an average PC and it only required around 22 GB of storage. However, the game has gotten bigger over the years with all the additional content and the storage requirement has gone up to 56 GB. The game is completely free-to-play and can be downloaded and played via the Origin client or Steam. As of today, the minimum system requirements for the game is as follows;

And as for the latest mobile game, the minimum requirements for it to be installed on an Android device is 2 GB memory, 4 GB of storage, and a chipset of at least Snapdragon 435/ Hisilicon Kirin 650/ Mediatek Helio P20/ Exynos 7420. Similarly, the game will be available only on Apple devices with the Apple A9 chipset and running iOS 11 and above. If you meet these minimum requirements you can head on to the relevant official app stores and download the game from a single tap. And make sure you download the original game as there are many clones both on Apple’s App Store and Google’s Play Store.

Newcastle in Apex Legends: Abilities, Tips, and More!
Newcastle just joined the Apex Legends' roster as the latest Legend. You can learn more about him and improve on playing him with this guide.
22/05/2022
1384 Views

Does Apex Legends support Crossplay to play with friends?
Today, the game is available to enjoy with Crossplay on platforms like PC, PS4, PS5, Xbox One, Xbox Series X and the Nintendo Switch. These platforms make for an enjoyable gaming ...
07/06/2022
1361 Views

How Many Players Does Apex Legends have? 2022 Player Count
Released back in February 2019, Apex Legends has grown rapidly and created a solid place for itself among the top multiplayer games and arguably the best online first-person shoot...
07/06/2022
1295 Views
Comments
No comments yet
Please login to leave a comment.
Login
Streams
Live
Streams
Live
Popular