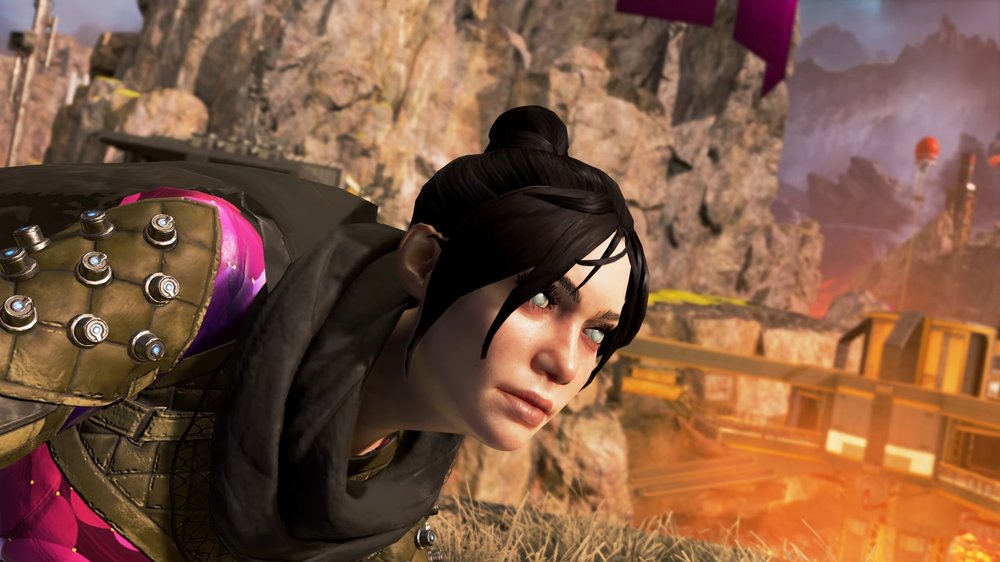 Thanks to her easy accessibility, she also ranked among the most easy-to-use Legends. You can take a look at which are the other best Legends for beginners.

Wraith is an Offensive Legend, and her abilities allow the players to develop some creative gameplay choices. This guide will help you learn how to play Wraith in Apex Legends efficiently. So, let's jump right into it. 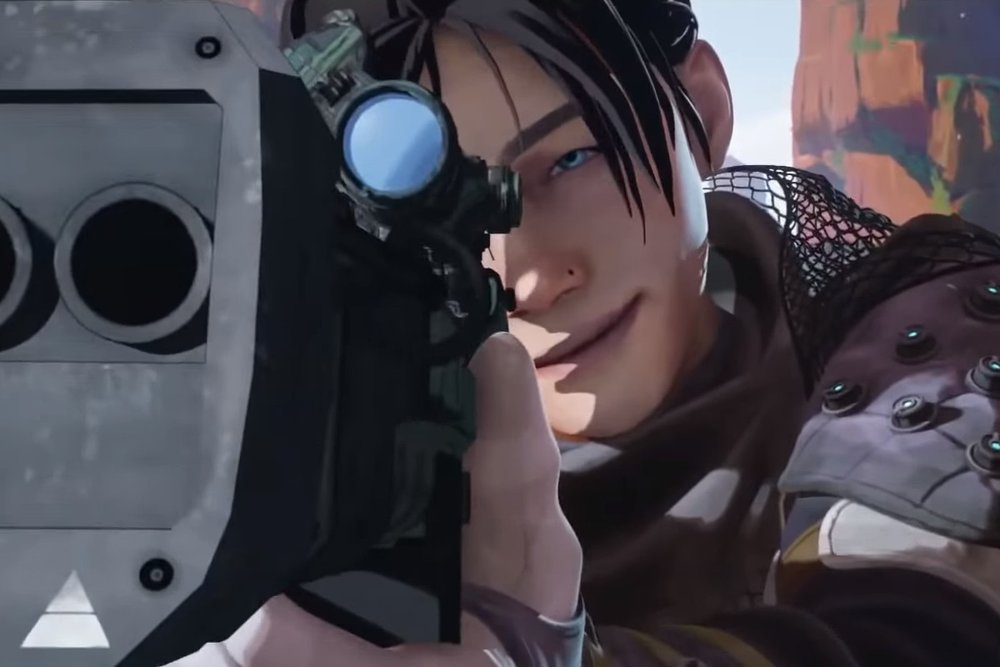 Wraith's backstory and lore are quite interesting. Most of her past is shrouded in mystery, making her backstory really intriguing. She awoke in an IMC prison facility without recollecting who she was.

Renee Blasey, the Senior Science Pilot, volunteered as a guinea pig for her own experiments. Her lover deceived her and locked her up. Now, all that remained was a fearful girl, terrified by the voices in her head, until another version of herself emerged and taught her to listen to the voices.

Wraith found the strength to break away from her cage and escape into another universe - this reality. Here she started competing in the Apex Games to investigate her past.

Voice from the Void (Passive) 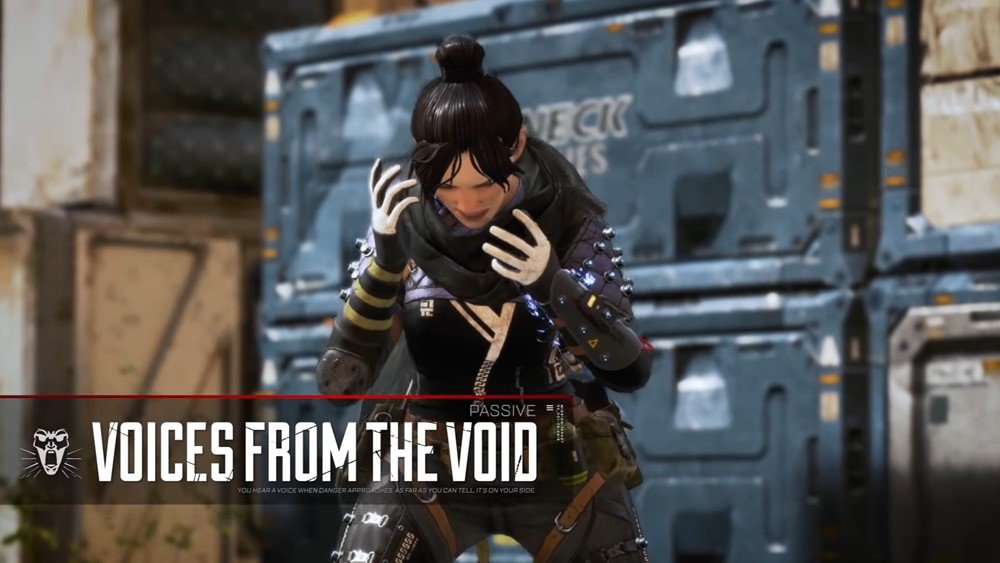 Wraith occasionally hears voices alerting her of her surroundings and the presence of opponents nearby. Wraith is alerted if she is being targeted, if there are Caustic or Wattson traps nearby, if there are a lot of enemies in the area, or if many enemies have died nearby.

This is extremely useful as you can easily be aware of your surroundings constantly. It is quite difficult for enemies to camp nearby.

It would be best if you kept in mind that this ability is only audible and doesn't reveal enemy locations. Moreover, it would help if you communicate with your teammates about the voices that you hear. Only you're able to hear them.

Into The Void (Tactical)

Wraith's tactical ability provides her with temporary invisibility and invincibility. When entering and departing the void, there is a brief delay during which Wraith is unable to do any other activity and is exposed to enemy gunfire. She then enters the void for four seconds, getting a 30% mobility bonus and invincibility.

Into The Void is what makes Wraith so tempting. This ability allows you to either escape a gunfight or rush toward the enemy from behind. You can easily score some kills if you learn how to use this ability more efficiently.

However, all good things must come with a cost, and that's the case with Into The Void as well. First of all, enemies can track you because Wraith leaves a blue trail behind her when she's invisible. Moreover, the ability takes 25 seconds to recharge, so you must use it carefully. But despite all this, it is a great ability to have on hand. 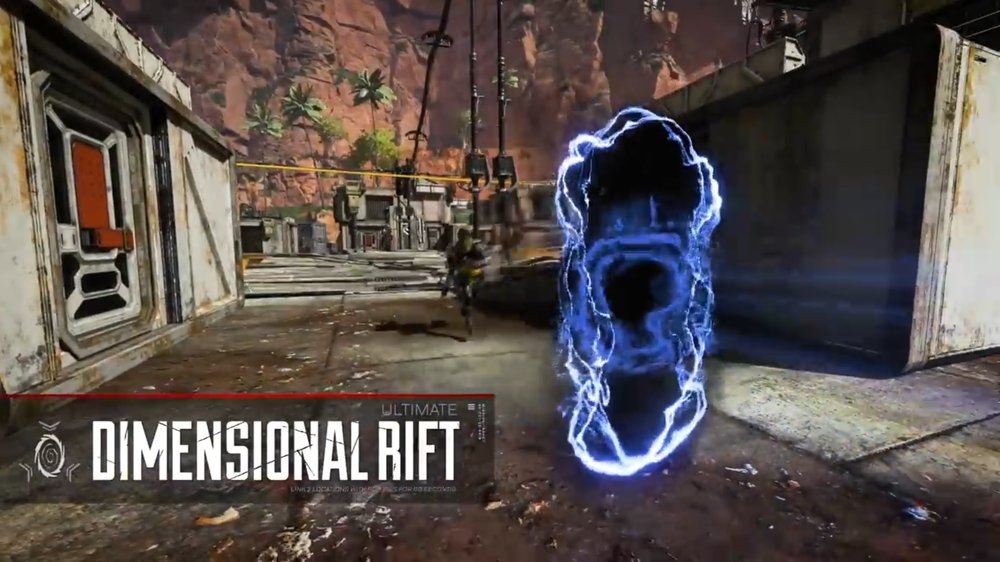 Wraith's ultimate ability creates a portal that lets both allies and opponents cross short distances. With the initial cast, Wraith opens the portal and can pick where it closes with a second cast, allowing you to travel a limited distance.

When Dimensional Rift is used, Into the Void is activated instantly, and Wraith obtains a 25% movement speed increase, allowing her to travel more effectively while establishing a portal. Both of these portals last for 60 seconds before putting Wraith's ultimate back on cooldown.

Portals are ideally placed over cliffs and in regions that would be difficult to return to otherwise. This allows Wraith and her companions to rotate and swiftly gain high ground when necessary.

Now that you have familiarized yourselves with Wraith's abilities let us tell you a few useful tips and tricks that will help you understand how to play Wraith in Apex Legends.

Picking the correct teammate Legends is very important. However, in Wraith's case, she can be paired with most of the roster in Apex Legends. But the best option would be to pair her with some legends that can give her a boost of momentum, like Octane or Pathfinder. These Legends can allow her to place portals easily over large distances.

Another effective pair is with Caustic or Wattson. They can place their traps at the ends of Wraith's portals and eventually lead enemies into their mouths. Recon Legends such as Bloodhound can also work well with Wraith as they can reveal enemies that Wraith's passive ability has detected.

Wraith is essentially an Offensive Legend. However, you can also use her in a more defensive sense. You can use your portals to revive teammates or help them escape a dangerous firefight.

Wraith is a great all-rounder character. You can easily use her abilities in different ways. As we discussed above, you can set up traps for enemies. Moreover, you should not be afraid to retreat alongside your teammates using your ultimate ability.

Lure Enemies To Your Portals

Another strategy is to lure opponents through portals. Enter a portal and shoot at an adversary before rapidly exiting to the other side. If your adversary falls for the bait, you will be ready and waiting for them. This entails grabbing a strong close-range weapon and blasting at them when they appear in front of you.

Having a Legend like Rampant as your teammate is great in this situation as she can use her ultimate ability to down multiple opponents. You can mix and match this technique with various combinations and figure out the best strategy for luring and downing opponents. This brings us to our next point.

Don't be afraid to mix and match Wraith's abilities during a match. You should experiment with her under different situations and create your own Wraith meta. In addition, experiment with different weapons as well.

You can use shotguns and wait at the end of portals, or you can use your tactical ability and jump headfirst into a fight with your SMG or AR. There are just endless possibilities when it comes to playstyles here.

So go ahead and jump in a few matches with Wraith. Soon you'll get the hang of her abilities and develop your own playstyle.

With that said, this was our guide on how to play Wraith in Apex Legends. We hope you find it helpful and implement our tips and tricks in your gameplay. Don't forget to take a look around our website and read our other guides as well.

Best Brimstone Smokes for Bind
Brimstone is a popular smoker in Valorant right now. Players are using him on Fracture and Bind. Here you'll find a guide how to play Brimstone on Bind.
23/05/2022
1880 Views

How To Receive Alpha Threat card in VALORANT
VALORANT pleased its fans with the release of a new comic book-inspired player card.
13/07/2022
1328 Views

How To Check Your Playtime in VALORANT
It's been two years since the release of the shooter from Riot Games - VALORANT. Millions of players from all over the world have played this game at least once. Tens of thousands...
07/07/2022
1572 Views

What does NT, WP, GL and HF mean in Valorant?
These terms players use very often. They help to give a quick and clear assessment of the situation that occurred in the round or in the whole game.
20/03/2022
2145 Views
Comments
No comments yet
Please login to leave a comment.
Login
Streams
Live
Streams
Live
Popular