Activision finally released Warzone 2.0 Season One Reloaded after fixing several aspects of the battle royale sequel. In the game, the weapon pool is still pretty small, especially when you compare it to the number of guns that eventually ended up in the first Warzone.

As of right now, players will only see the Modern Warfare 2 weapons that they can drop into Al-Mazrah with, but the real question is, what weapons are your enemies using? Naturally, the best weapons ultimately become the most used and the most meta.

In this article, we have compiled a list of the top 10 most popular guns in Warzone 2.0 (using data from WZRanked) in order to help you get ahead of others and also to help you give yourself the best chances of securing all of those necessary wins. 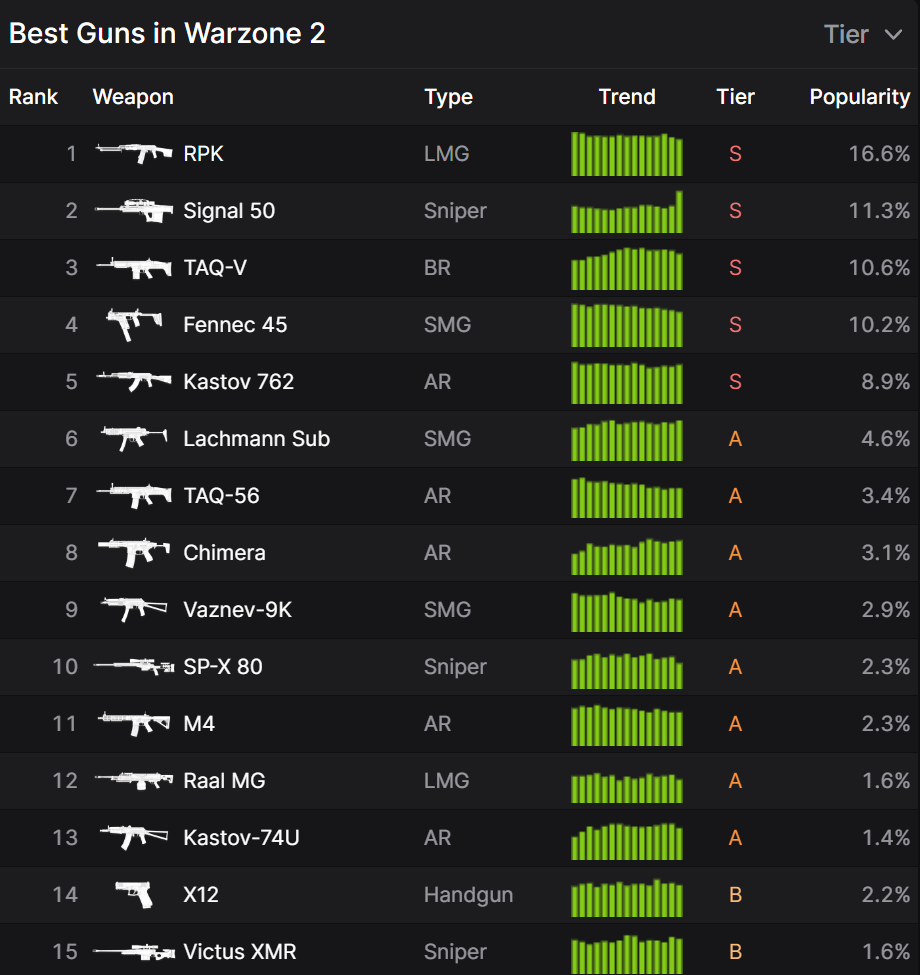 The RPK has surprisingly jumped up the ranks in no time and has landed the first-place spot. The gun is a powerful all-round LMG, consisting of all the weaknesses the weapon class usually brings.

The run-and-gun players will have to temper their aggression because of the gun’s slow handling and mobility. However, if you are engaging at longer range or posted up, then there is absolutely no better weapon in the whole game.

This is clearly reflected in players who go for the RPK in matches in just under 1/5 scenarios.

The TAQ-V is a fantastic weapon and hits incredibly hard. The gun’s volatile recoil and slow fire rate are easily balanced out by its excellent range and high damage. However, players must pick their fights very carefully, but when it comes to medium and long ranges, you can completely trust your weapon and have confidence in the TAQ-V.

The main strength of the Fennec 45 is its firing rate which fires extremely quickly and takes out its opponents correspondingly.

Nevertheless, it still means that players will run out of ammo very fast, so they should make sure to bring extended mags and a secondary weapon to cover them at longer ranges. The Fennec 45 still remains the best SMG in Warzone 2.0 by quite a margin.

The Kastov 762 has everything similar to the old AK-47 players except the name used to love in the past. Its amazing range and high damage are perfectly balanced by its volatile recoil. Learning how to handle the gun and taking some time to perfect it is a shortcut to Warzone 2.0 wins, given that players play sensibly.

In Modern Warfare 2, the Signal 50 left players wanting more in it, but in Warzone 2.0, the gun’s high damage and semi-automatic fire rate make it a very powerful sniper. The Signal 50 still handles very slowly, but so long as snipers are unable to one-hit, there will be an uproar for the Signal 50.

The Lachmann Sub, also known as the MP5, is the last weapon that players unlock in its respective weapon platform. This weapon is powerful, versatile, and quick enough to keep players engaged in mid-range gunfights. The gun has a little more recoil than one would want, keeping it from going any higher on the list.

The TAQ-56 is the Scar-H assault rifle and has the same strengths and weaknesses as the rifle in the previous Call of Duty games. Strong range and damage are balanced by the gun’s poor handling and mobility.

However, in the right hands, equipped with the right attachments and played with a sensible play style, the gun can become eminently even more powerful.

As of right now, the SP-X 80 is a very powerful choice for players who wish to run a sniper rifle. The weapon does not hit as hard as some of its counterparts, but it is a welcome mix of speed, power, and accuracy.

The Chimera is the reincarnation of the Honey Badger from CoD: Ghosts. It is not as famous as its originator yet, but a fast fire rate, strong handling, and built-in suppressor make it a pretty good Assault Rifle, regardless of the gun struggling at long ranges.

Since the release of Modern Warfare 2, the Vaznev-9K has been the SMG of choice for the professionals. The gun is less powerful in Warzone 2.0, but its controllable recoil, damage, and handling make it a worthy weapon. It would easily land in one of the top five spots if it had a better rate of fire.

Best Warzone 2.0 Sniper Rifle Class Loadouts: Attachments, Setup, Perks
Are you wondering which sniper rifle is the best in the current Warzone 2 meta? Check out this article where we have ranked each one along with their loadouts!
29/01/2023

Call of Duty: Modern Warfare II Twitch Drops And How To Get Them
Wondering what the Twitch drops are for Modern Warfare II and how to get them? Check out this article where we discuss everything in detail!
08/11/2022

Best Raal MG Warzone 2 Loadout: Class Setup, Attachments, Perks
Want to know the best Raal MG loadout for Warzone 2.0 along with the best attachments, perks, setup, class, and equipment? Check out this article to know all about it!
29/01/2023